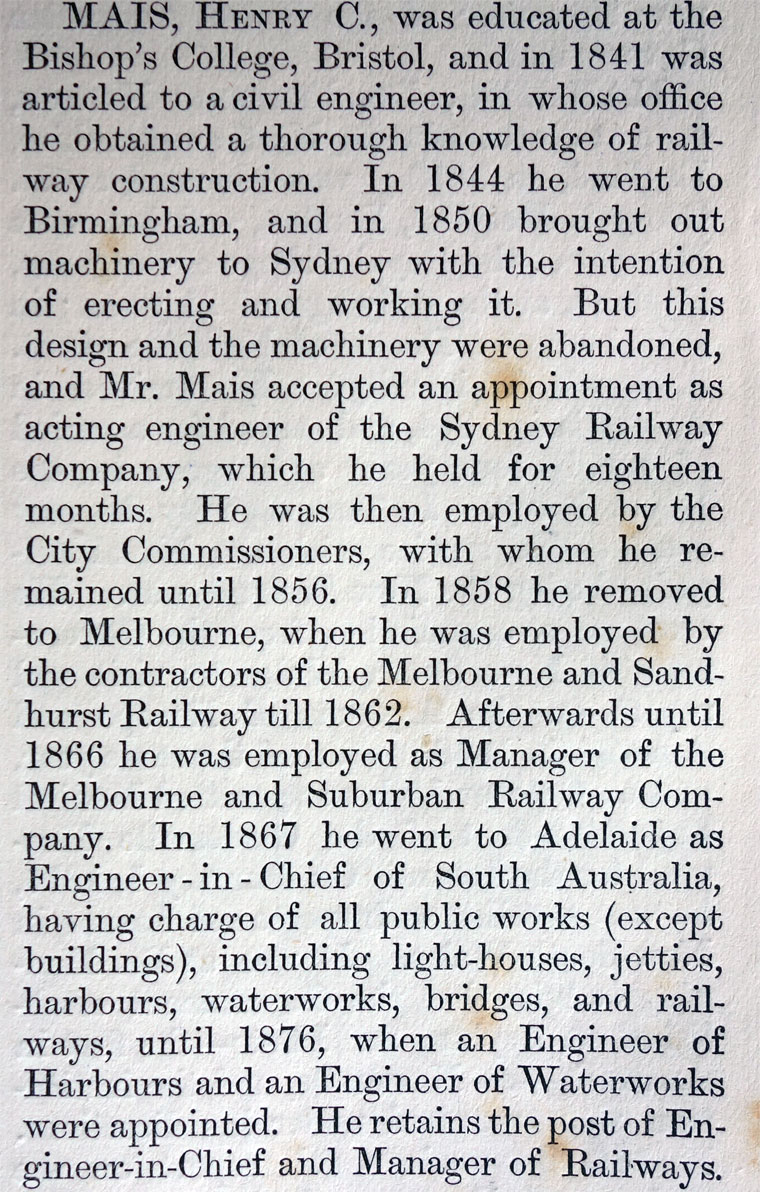 MAIS, HENRY C., was educated at the Bishop's College, Bristol, and in 1841 was articled to a civil engineer, in whose office he obtained a thorough knowledge of railway construction.

In 1844 he went to Birmingham, and in 1850 brought out machinery to Sydney with the intention of erecting and working it. But this design and the machinery were abandoned, and Mr. Mais accepted an appointment as acting engineer of the Sydney Railway Company, which he held for eighteen months.

He was then employed by the City Commissioners, with whom he remained until 1856. In 1858 he removed to Melbourne, when he was employed by the contractors of the Melbourne and Sandhurst Railway till 1862.

Afterwards until 1866 he was employed as Manager of the Melbourne and Suburban Railway Company. In 1867 he went to Adelaide as Engineer in Chief of South Australia, having charge of all public works (except buildings), including light-houses, jetties, harbours, waterworks, bridges, and railways, until 1876, when an Engineer of Harbours and an Engineer of Waterworks were appointed. He retains the post of Engineer-in-Chief and Manager of Railways.

HENRY COATHUPE MAIS was born at Westbury-on-Trym, Bristol, in 1827.

He was educated at a private school in Bath, and at the Bristol and Bishop's Colleges respectively, in Bristol, subsequently completing his studies under a tutor.

In 1844 he was articled to Mr. W. M. Penistone, one of Sir I. K. Brunel's chief engineers during the completion of the Bristol and Exeter Railway, and subsequently on the surveys and construction of the Wilts, Somerset, and Weymouth Railways.

On the completion of his pupilage he went to Birmingham and spent eighteen months in the engineering department of the Broad Street Foundry.

In June 1850, at the age of twenty-three, he, with the proprietor of this foundry, left England for Australia, and, had it not been for the unsettled financial state in Sydney at that time, they would have opened an engineering and machinery business in that city.

In the following year he became Engineer to the Sydney Railway Co., which had been formed to build the line from Sydney to Parramatta.

Eighteen months later he entered the service of the City Commissioners as one of the Assistant Engineers, and remained in that capacity until 1856.

He then joined in partnership in a manufacturing and general engineering business in Sydney, and carried out some extensive works.

In 1858 he went to Victoria and was engaged as Engineer and Manager for Messrs. Cornish and Bruce, the contractors for the construction of the Melbourne and Bendigo Railway.

On its completion in 1862 he was appointed Engineer and Manager of the Melbourne and Suburban and Brighton Railway Companies, and retained these positions until the railways became the property of the State.

After having spent five years in Victoria, he went to Adelaide to take the post of Engineer-in-Chief of South Australia, an office which he held for twenty-one years until his retirement in 1888. During this period he also held the position of Engineer of Water Works from 1867 to 1878 and Engineer of Harbours from 1880 to 1888. He was also responsible for the construction of 1,470 miles of railway, several lighthouses, wharves, jetties, etc. In 1882, by direction of the Government of South Australia, he made an extensive tour round the world, and embodied the result of his observations in a Report which was laid before Parliament. He was a Justice of the Peace for over thirty-four years.

In 1888 he returned to Melbourne, and commenced practice as a consulting engineer and arbitrator, in which latter capacity he acted in important disputes between railway contractors and the Governments of Victoria, New South Wales, Queensland, and Tasmania respectively. In conjunction with other works carried out, Mr. Mais made inspections of the private railway lines in South Australia, designed and erected hydraulic sluicing plant for gold mining, and was consulting engineer for several large gold milling and mining companies in West Australia.

He continued in practice as a consulting engineer until December 1912, when he retired owing to indifferent health.