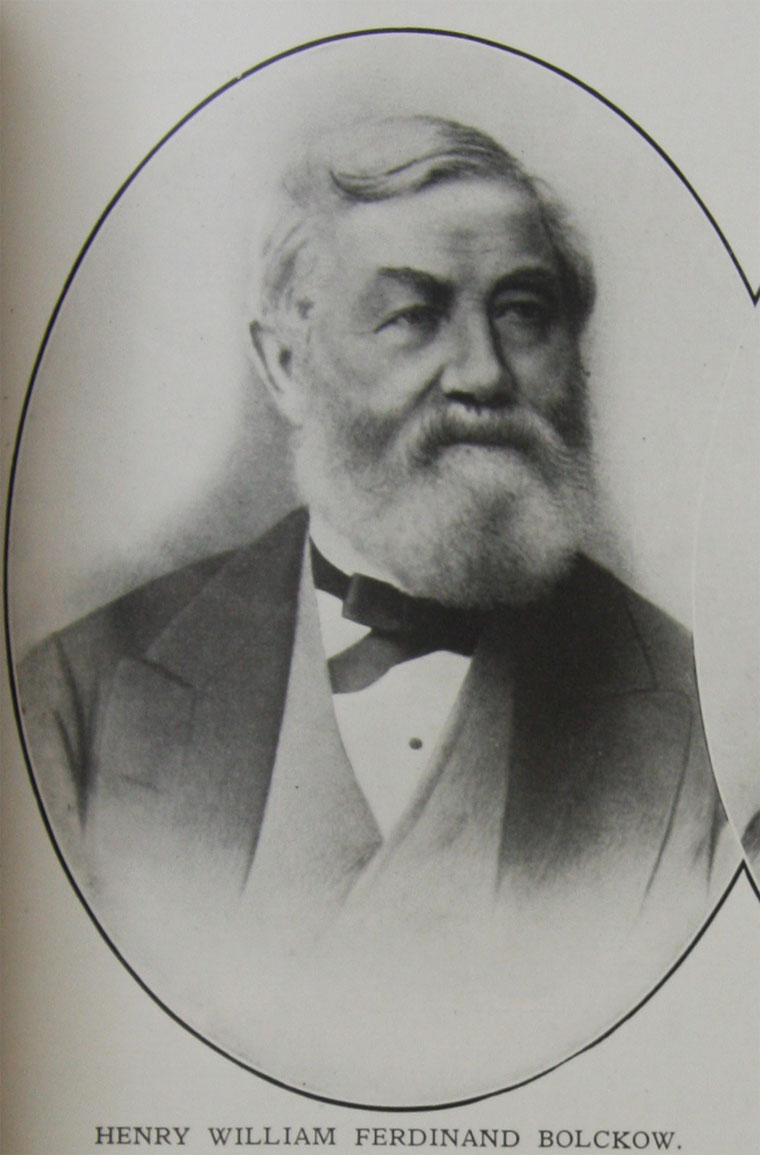 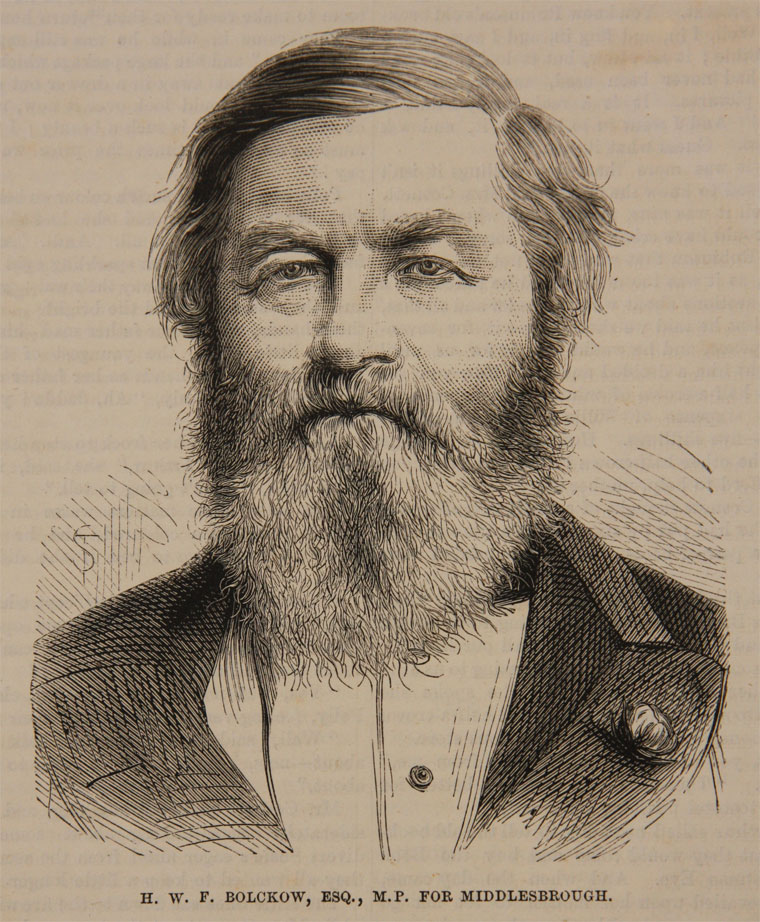 HENRY WILLIAM FERDINAND BOLCKOW (1806-1878), the founder of the great iron industry of Middlesbrough, was born at Sulten, in Mecklenburg, Germany, in 1806 and when fifteen years of age, he was placed by his parents in a merchant's office at Rostock, where he remained till induced, in 1827, by a former companion, then residing in Newcastle-on-Tyne, to visit England.

After thirteen years of successful business operations, in conjunction with that friend, his attention was directed to the development of the iron trade, which was at that time in its infancy, so far as the North of England was concerned. With rare foresight he selected Middlesbrough as the centre of operations — a place hitherto almost unknown to geographers — a not very successful coal port of six or seven thousand inhabitants, and he took into partnership with him the late Mr. John Vaughan — a man not inferior in creative genius to the elder Stephenson — who, from being a common iron-worker, rose, step by step, with Mr. Bolckow.

On a very small scale, Messrs. Bolckow and Vaughan commenced, in 1841, the manufacture of iron, purchasing the raw material at a distance, and making it into bars, rails, castings, and the like.

It was not till 1850 that Mr. Vaughan, when taking a walk, struck his foot against a piece of stone, which, on examination, proved to be the very thing for which he and his partner had long been searching. The Cleveland ironstone was discovered! Such was the small beginning from which has sprung the gigantic firm which have had in their employment, at one time, over 8,000 men which annually raise about 750,000 tons of ore, and make nearly 300,000 tons of pig and manufactured iron!

From this period the town and district extended, in population and wealth, with unparalleled rapidity. The works and the workmen multiplied. In a comparatively few years the population of Middlesbrough rose to nearly 45,000, and the expansive district of Cleveland is now densely peopled by busy workers. The number of blast furnaces in the district now - of the largest dimensions, and constructed on the most approved principles - is 120. The "make" of Cleveland iron in 1870 was 1,695,377 tons.

Throughout his life, Mr. Bolckow has shown that he practically recognised the responsibilities involved in success. Long before councils of conciliation in trade disputes had assumed their present definite form, he proposed that representative boards, consisting of masters and men, should be appointed.

He has occupied almost every post of honour in the town and district. He was first Mayor of Middlesbrough; and when the borough was enfranchised by the Reform Act of 1867, he was elected first Member of Parliament — a post the arduous duties of which he still faithfully discharges.

Nor has Mr. Bolckow deferred his acts of munificence. He has done much to improve the town of his adoption. His most princely gift to the people is that of the fine Albert Park, which is said to have cost £30,000. This park was opened by His Royal Highness Prince Arthur, in 1868, when Mr. Bolckow's loyal hospitality called forth the special thanks of Her Majesty the Queen. He has also presented to Middlesbrough excellent schools, which cost £7,000, and accommodate nearly one thousand children.

Mr. Bolckow's life, by God's blessing, has been a singularly successful one, and has happily been distinguished not only by remarkable enterprise, but by prudence, and wisely-directed munificence. May his useful life long be spared. [1]

Henry William Ferdinand Bolckow, M.P. was born at Sulten, in the Grand Duchy of Mecklenburg, on the 8th of December, 1806, and died at Ramsgate on the 18th of June, 1878.

Me was elected an Associate of the Institution of Civil Engineers on the 14th of April, 1863.

Mr. Bolckow, whose name is inseparably connected with the great iron trade of Cleveland, came to England in 1827, and, in partnership with Mr. C. Allhusen, was in business at Newcastle until 1839, when he associated himself with the late John Vaughan, then managing the Walker Iron Works, and with him removed to Middlesbrough.

At this time there was practically, no manufacture of pig iron in or very near the Cleveland district, and Bolckow and Vaughan made wrought iron in a small way from Scotch pig iron and scrap. The adventure was not very successful; and in 1846 the firm acquired collieries in South Durham, and established, at Witton Park, blast furnaces for the manufacture of pig iron from the clay ironstone of the coal measures.

A short experience showed that the supply obtainable was wholly inadequate; and Messrs. Bolckow and Vaughan commenced to use the ironstone of Cleveland, which, though it was known to exist at various points, and had frequently been tried experimentally, was thought to be of no practical value.

After much patient search the main bed of Cleveland ironstone, now so largely worked, was, chiefly through the exertions of Mr. Vaughan and of Mr. Harley, M. Inst. C.E., traced to the Eston Hills, and blast-furnaces were erected at Middlesbrough to work it.

By this time railway communication with the adjacent coal fields had been established, and the improved river Tees gave a good and convenient outlet for the pig iron produced. Henceforward the path of Mr. Bolckow and his partner, which hitherto had been difficult and discouraging, led rapidly to prosperity; and in 1864, when they disposed of their business to a limited liability company, the works handed over were, for extent and efficiency, among the first in existence. Mr. Bolckow was chairman of the new company, and was ever foremost in advocating improvements and progress. It is in a great measure due to him that the large steel works at Eston were established.

In his locality, as well as in the iron trade; Mr. Bolckow won for himself the highest respect and confidence. He had great enterprise and sagacity, and in everything connected with the well-being of those in his employ, and the district, he was very prominent and popular.

He was the first Mayor of Middlesbrough, and gave to the borough a public park of large extent, which was formally opened by his Royal Highness the Duke of Connaught, K.G. (then Prince Arthur) on behalf of the Queen. When Middlesbrough became a Parliamentary borough, Mr. Bolckow was unanimously elected its first Member, and he continued in that position while he lived.

As a patron of art he was well known and left behind him a collection of pictures such as has rarely been brought together in a single lifetime. On the 22nd of June, 1878, in the churchyard at Marton, close to the fine Hall in which he lived, he was buried by the side of his partner, Mr. Vaughan, with whom so much of his active honourable life had been spent; and it is scarcely an exaggeration to say that his funeral was attended by the whole population of the neighbourhood. It is hardly to be expected that Cleveland mill soon again look upon the like of the two men by whom its enormous iron trade and general prosperity were founded.

MR. H. W. F. BOLCKOW.-The Iron and Steel Institute has lost one of its earliest and most attached friends by the death of Mr. Bolckow, which occurred at Margate on the 18th. of June. The deceased gentleman was born at Sulten, in Mecklenberg-Schwerin, Germany, and commenced his business career in a merchant's office in Roitock.

In 1827 he came to England, where he has since continued to reside, and joined Mr. Christian Allhusen of Newcastle-on-Tyne, as a corn merchant. While in this trade he was introduced to the late John Vaughan, his future partner, who was then the manager of one blast furnace which had been built at Walker by Messrs. Losh, Wilson, and Bell, for smelting ores brought from mines near Whitby. The representations of Mr. Vaughan induced Mr. Bolckow to think favourably of embarking his fortune in the iron trade, while Mr. Allhusen gave up the business of corn factor, and went into the chemical trade, founding the now well-known firm of C. Allhusen and Co. In their new venture Mr. Bolckow furnished the' capital and Mr. Vaughan the practical experience. At first Messrs. Bolckow' and Vaughan had no thought of utilising the Cleveland ironstone.

Mr. Bolckow, in 1839, went to Stockton to endeavour to secure laud for the ironworks they proposed to erect, but his efforts were unsuccessful, and his steps were thus directed to Middlesbrough. Here, in 1840, a site of six acres was bought close to the river side, and mills and forges and a foundry were erected. The establishment, however, was small, and the firm did not attempt the smelting of pig iron, for what they used in the manufacture of their finished iron came from Scotland.

In 1846 they decided to erect furnaces at Witton Park, this site being selected because it was near the coalfield, and because the ironstone which it was proposed to use was found in the coal measures. No one then dreamed of the immense stores imbedded in the Cleveland Hills, and not a single furnace was erected in North Yorkshire or South Durham. At Tow Law and Consett there were furnaces. The firm had been very successful as finished iron manufacturers during the last five years, and in 1846 succeeded in turning out about 20,000 tons of bars, rails, &c. They made the engines of the first steamer built on the banks of the Tees. The supply of stone for the Witton Works was not equal to the demand, and the firm had to resort to the Whitby stone, which had been worked to a limited extent for some years previously.

In 1850, Mr. Vaughan came upon the main seam of Cleveland, and forthwith steps were taken by the firm to turn the discovery to commercial account. They opened mines at Eston, which are still worked very extensively, and undertook the erection of blast furnaces both at Eston and at Middlesbrough. Their business, as thus constituted, the firm continued to carry on with varying but generally successful results, until in 1865 they transferred it to a Limited Liability Company, established with a capital of £2,500,000. Under the auspices of this company and the management of Mr. Edward Williams, the vast concern continued to grow in bulk and importance until the nominal capital was increased to £3,410,000, and over 12,000 hands were employed in the mines, ironworks, collieries, &c., of the company, of which, since its formation, Mr. Bolckow has continued to act as chairman.

There is, perhaps, no office of honour and responsibility connected with his adopted town that the deceased gentleman has not filled, his dignities commencing with the first mayoralty in 1853, and culminating in his unanimous election as the first Parliamentary representative of the then newly-enfranchised borough in 1868.

It was Mr. Bolckow's duty to superintend the commercial working of the business, while Mr. Vaughan attended to its practical details, and it was therefore, perhaps, more as a commercial, than as a scientific ironmaster that he has a claim to distinction. At any rate, he has seldom come before the public as an authority on the practical bearings of the business in which he ultimately attained such fortune and renown, and it is for this reason that we are unable to speak of him as a contributor to the publications of this Institute. But Mr. Bolckow was none the less esteemed as a member of council, and especially as a trustee of the Institute, which would, doubtless, have had much more of his active co-operation but for the failing health which attended him during the last few years of his busy and useful life.