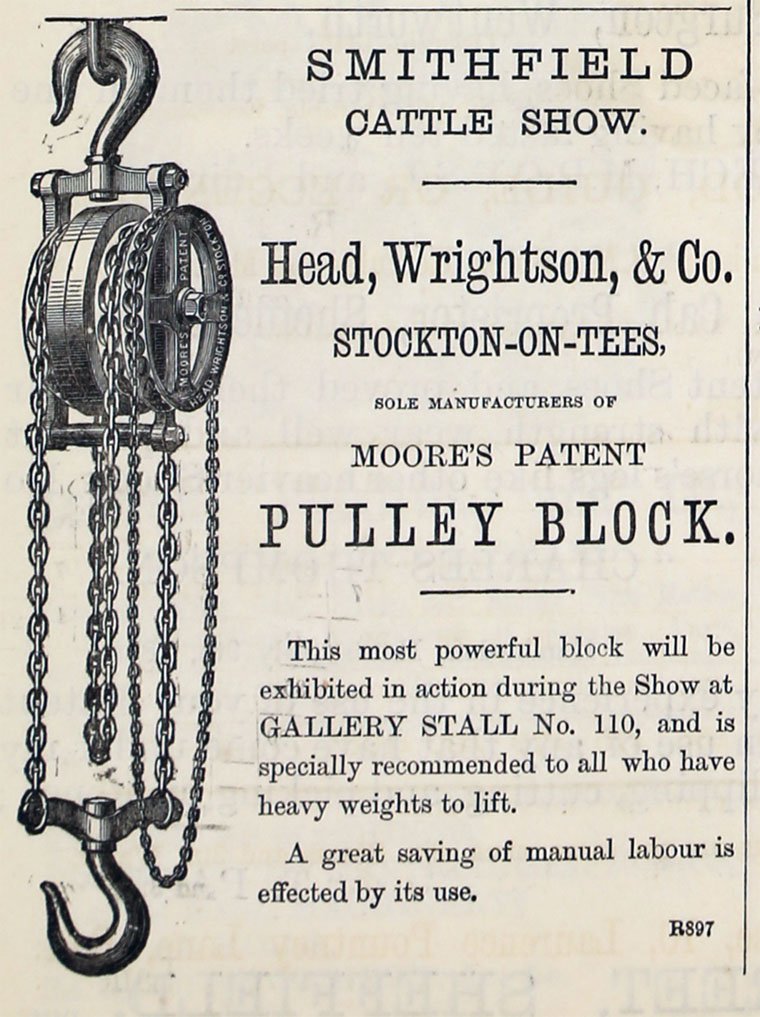 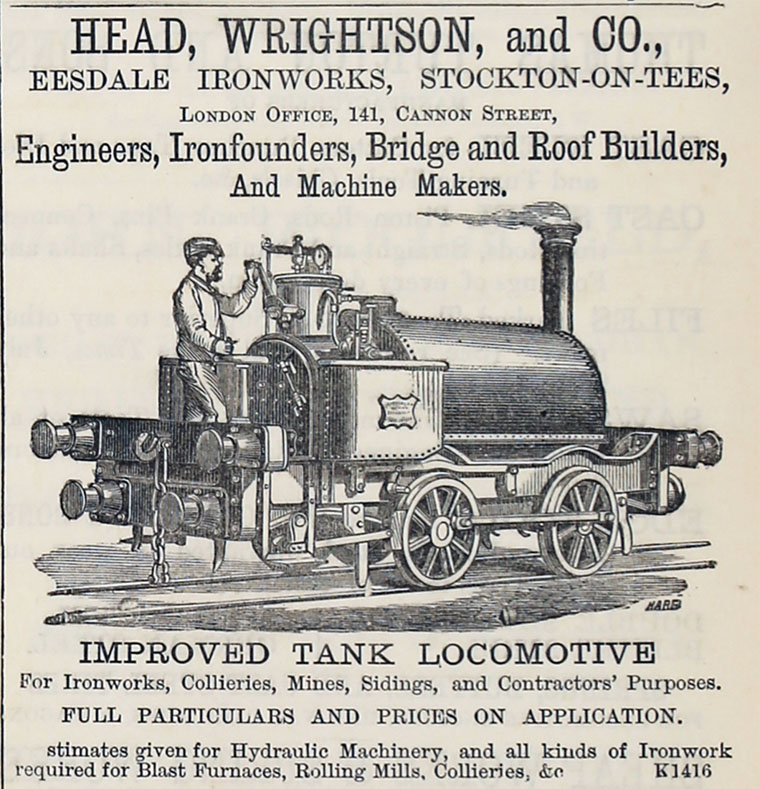 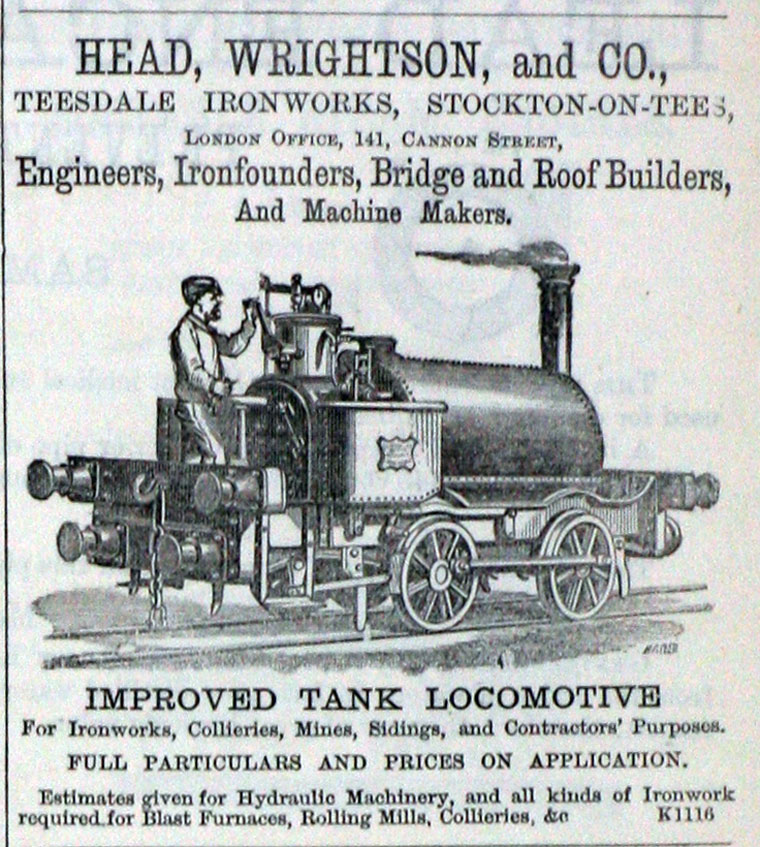 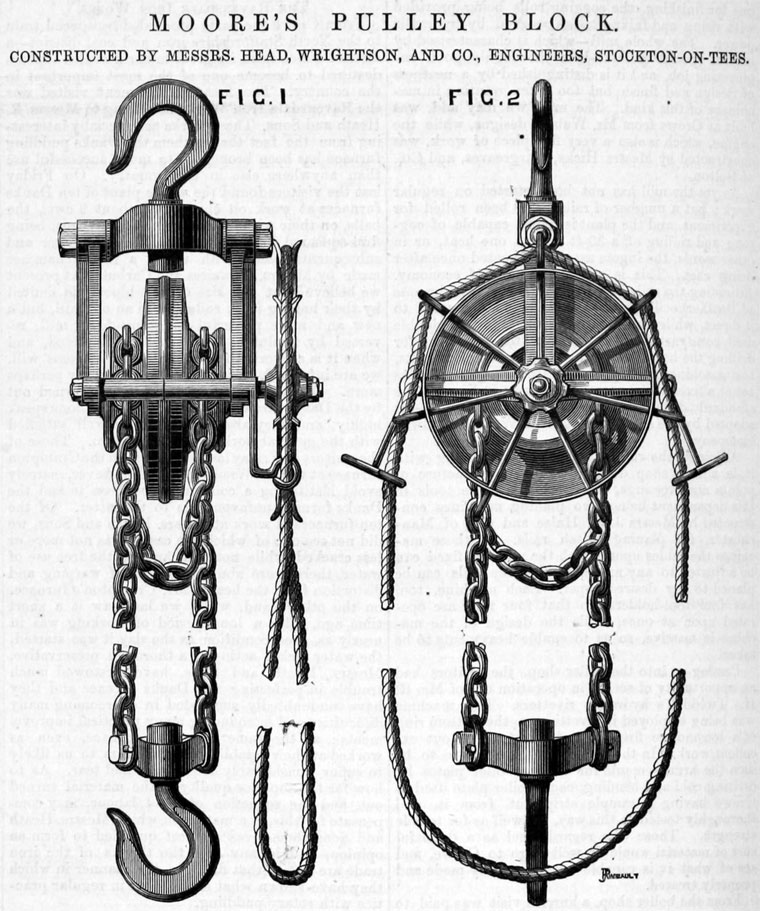 1878. Bridge for the Indus Valley Railway. 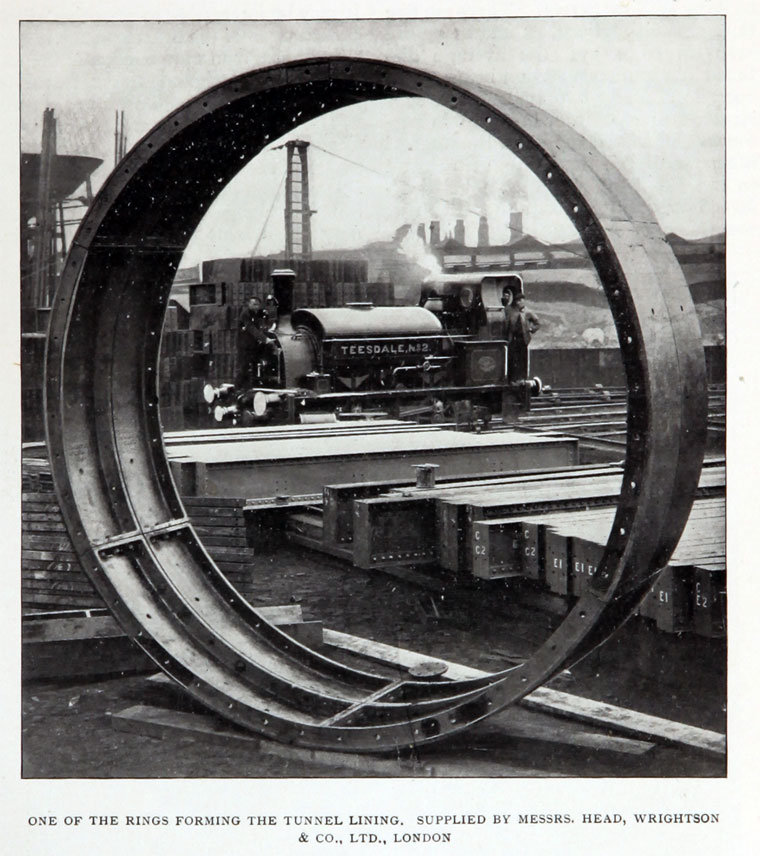 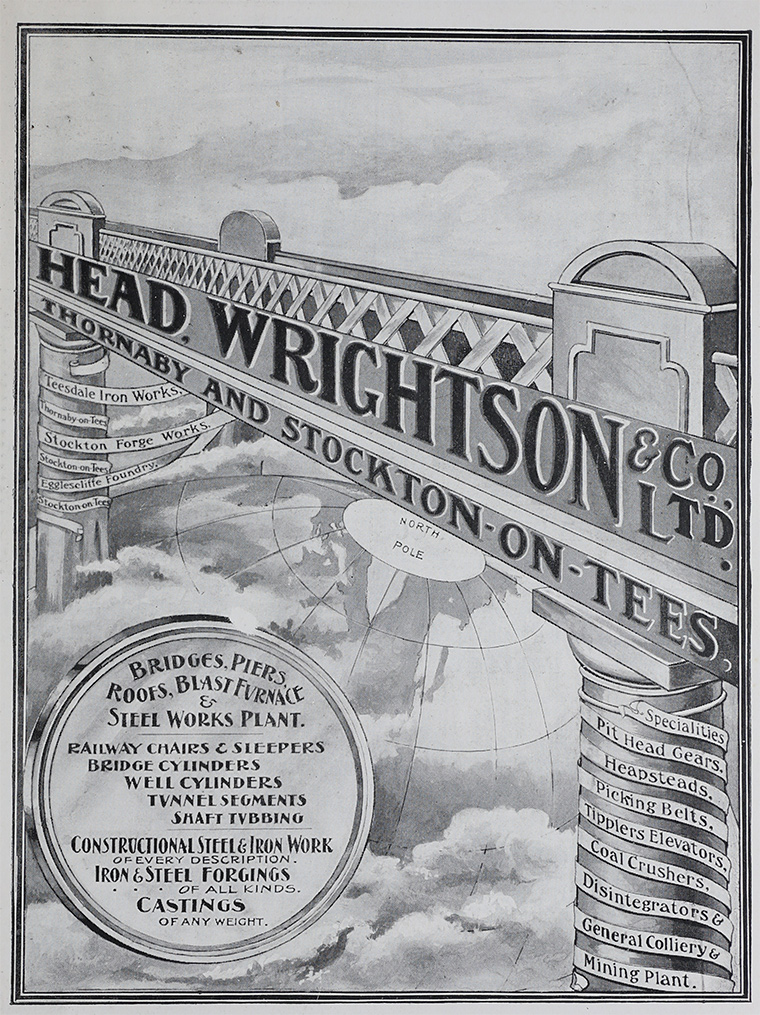 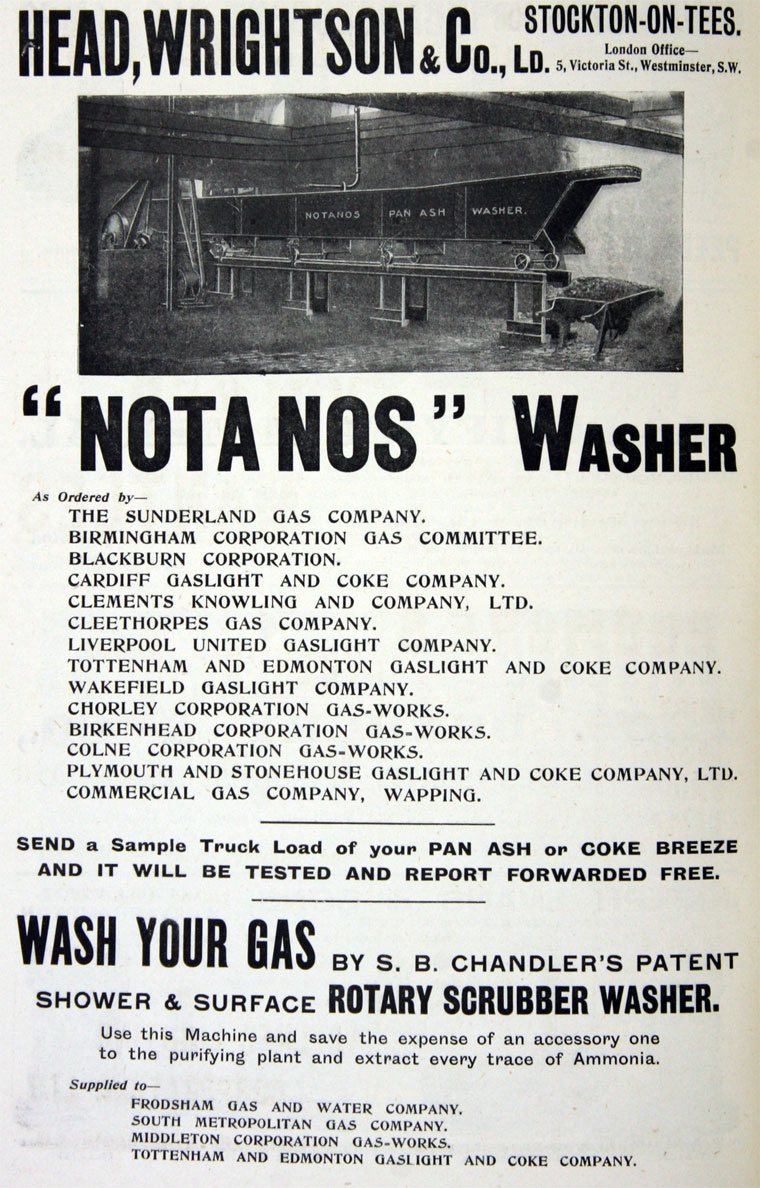 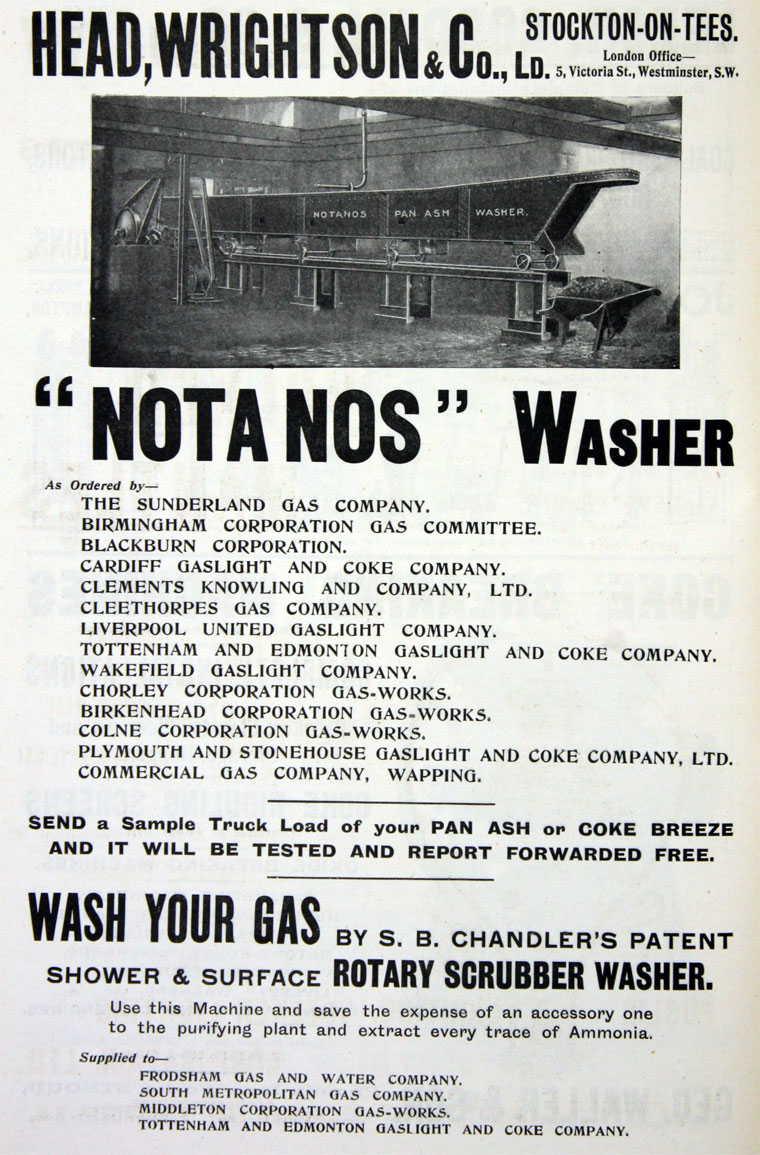 1914. The Scherzer Rolling Lift Bridge Over the Pamban Channel.

1914. The Scherzer Rolling Lift Bridge Over the Pamban Channel. 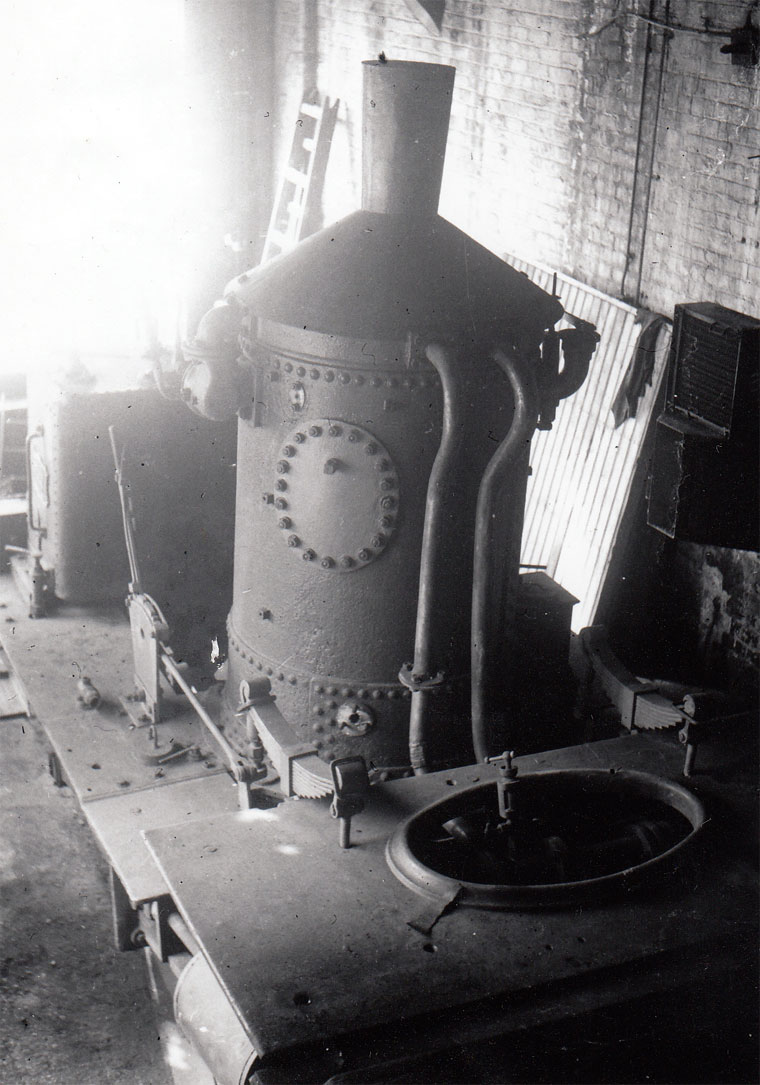 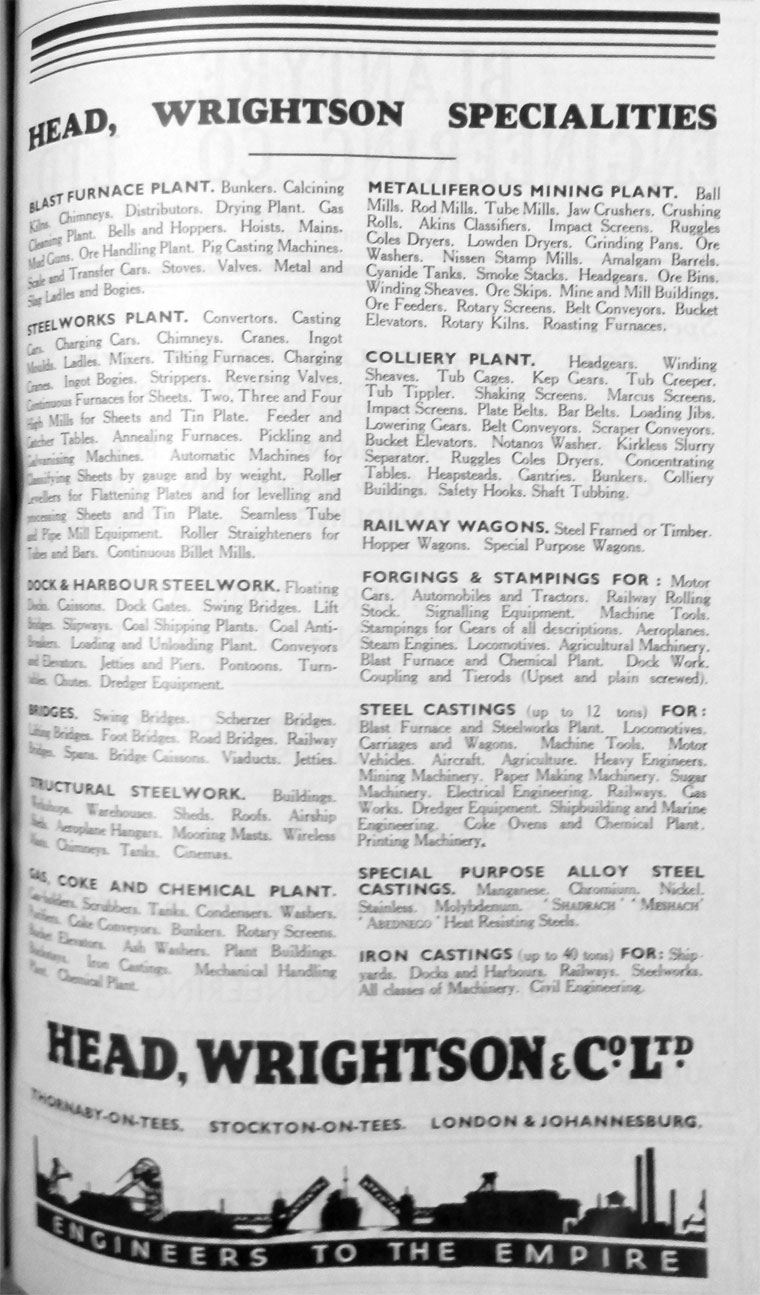 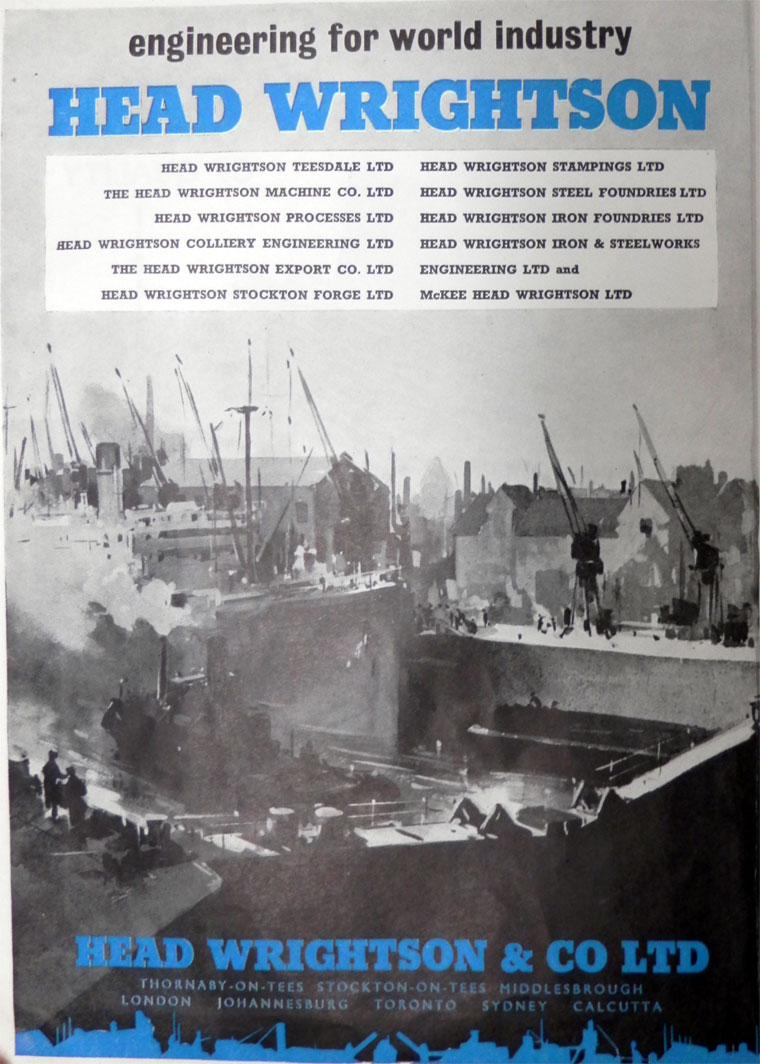 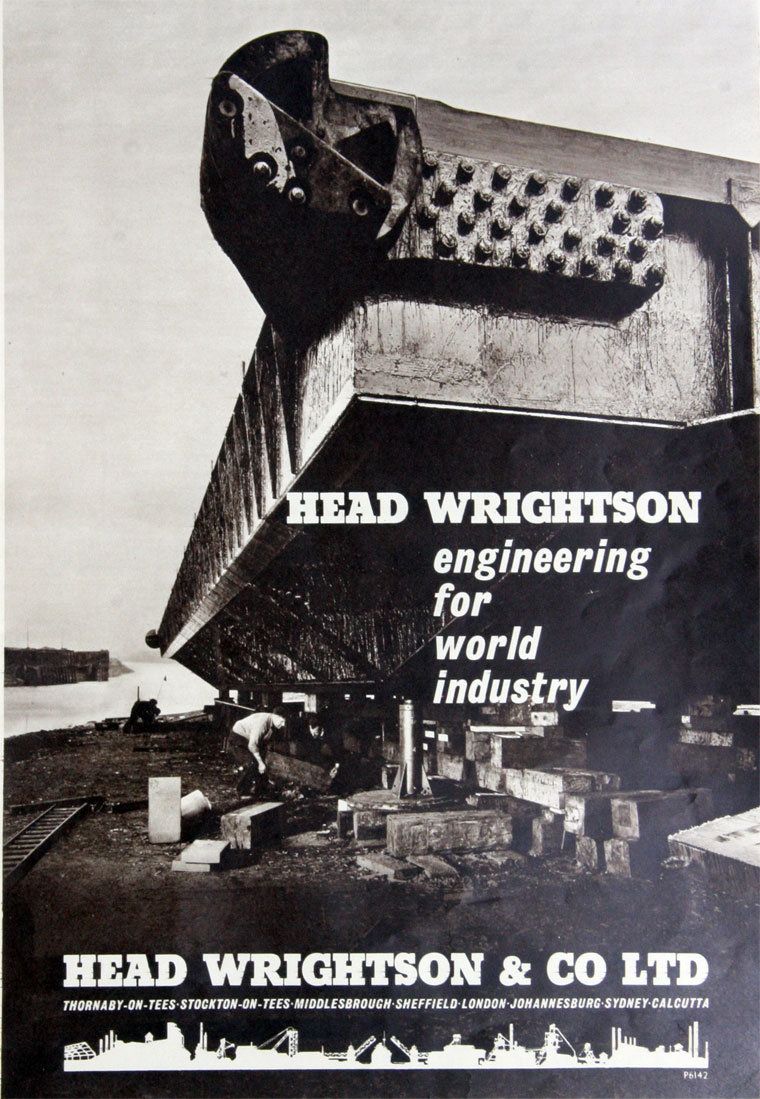 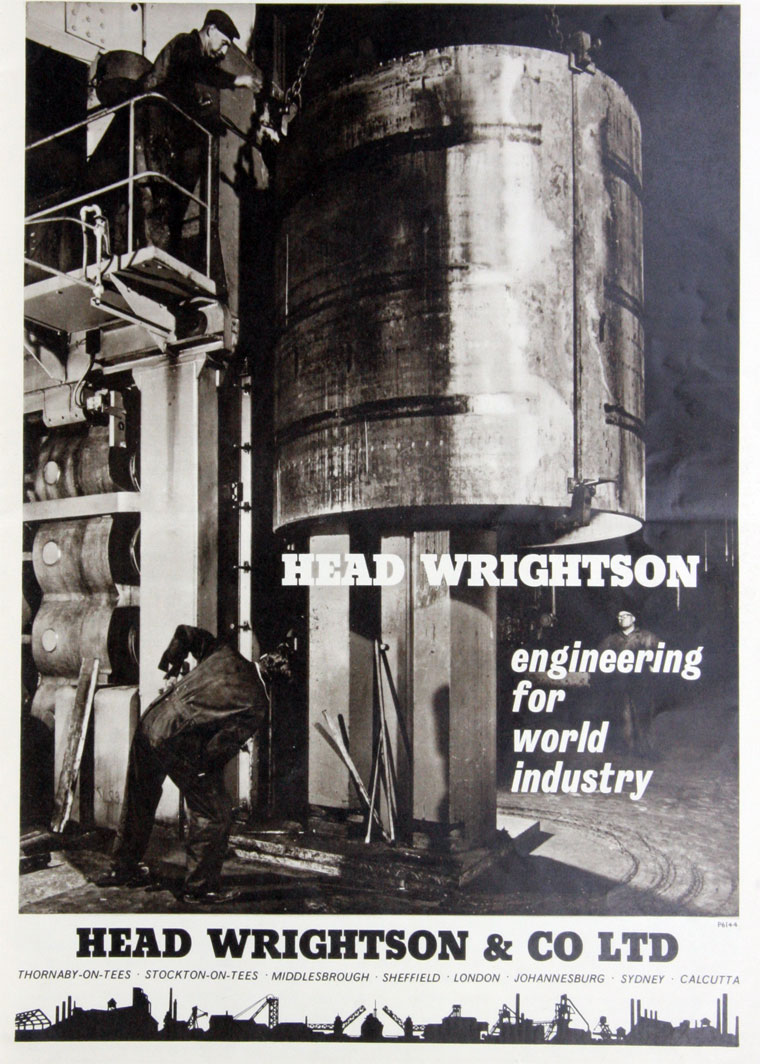 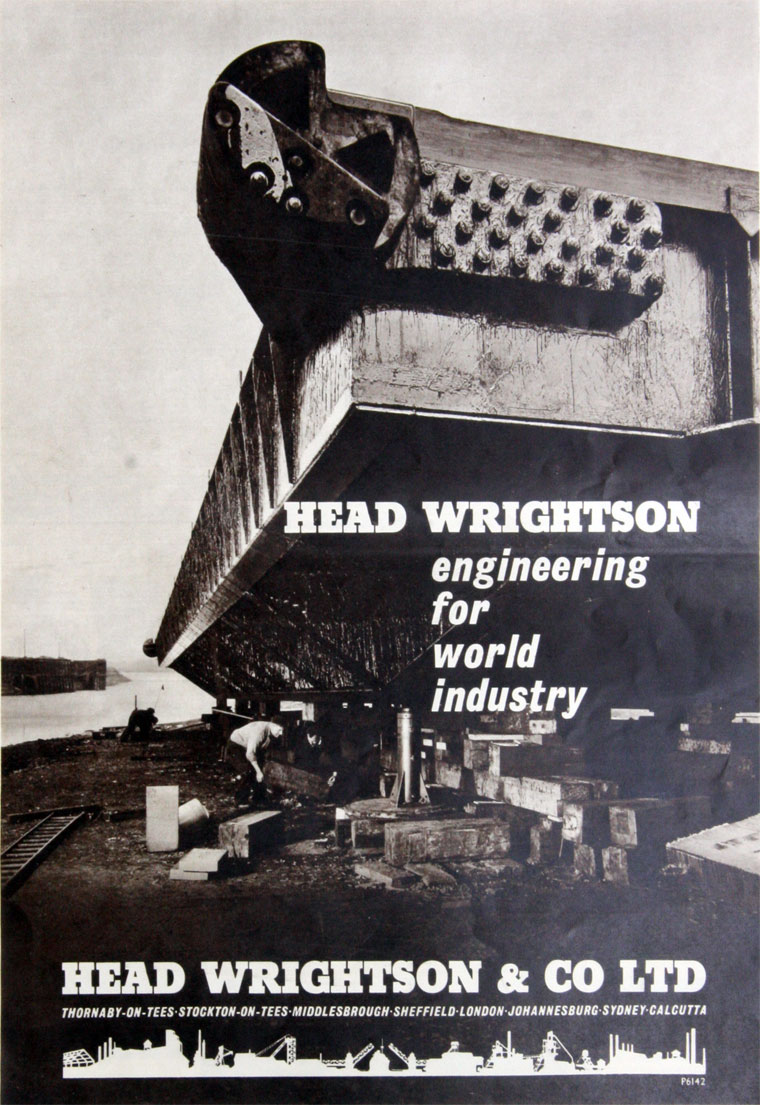 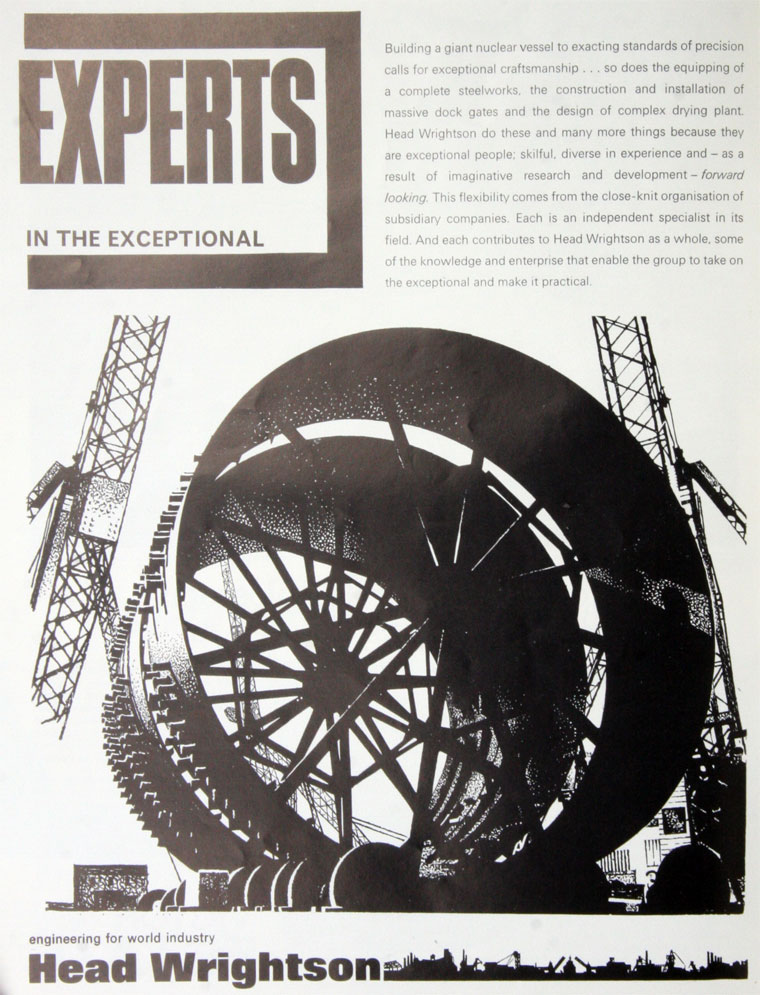 1840: An iron works was founded at Stockton.

1851: Teesside's first blast furnace was built, after iron ore was discovered in the Cleveland Hills.

1856 Thomas Howard Head started the Teesdale Iron Works at Stockton-on-Tees in partnership with Joseph Wright. The firm was known as Head and Wright. Later Joseph Ashby joined the firm.

1860 Joseph Wright of Teesdale Iron Works gained a patent on lifting apparatus for use in mines, also useful for raising heavy weights[1].

1860 July: Upon dissolution of a partnership, Messrs Head, Wright and Ashby made a declaration about the ownership of 2 pieces of land in South Stockton and Thornaby[2].

1860 Joseph Wright left the partnership with Thomas Head and Joseph Ashby, under the firm Head, Wright and Ashby, ironfounders and engineers[3], the style of the firm being afterwards Head, Ashby and Co.

1865 The firm made cast iron and wrought iron for boilers, railway chairs, naval ships, and many bridges across the world, the largest being in India. The firm employed 450 people.

1866 Head, Ashby and Co, Teesdale Iron Works, advertised a machine that consumed smoke and improved the economy of fuel use, based on Juckes' patent, improved by the company[4].

1867 After 12 years with the business, Thomas Howard Head sold his interest to Messrs. C. A. Head and Thomas Wrightson. The firm became Messrs. Head, Wrightson and Co Ltd.

1867 Alteration of partnership between Thomas Howard Head, Charles Arthur Head and Thomas Wrightson on the retirement of Thomas Head[6]. In the same file is an undated draft agreement between T. H. Head and M. T. Shaw of 141 Cannon St.

1867 Dissolution of partnership Thomas Howard Head and Joseph Ashby[7] under the firm Head, Ashby and Co in October 1866[8].

1888 Head, Wrightson and Co exhibited a model of the Empress Bridge for the Indus Valley Railway from a design by Sir A. M. Rendel, as well as a hydraulic centre crane for steel plant patented by T. Wrightson which incorporating an automatic fluid balancing system[9].

1890 Public company. The company was registered on 21 June, to take over the business of engineers and general contractors of the firm of the same name. [10]. Mr. C. A. Head was chairman and Mr. William Anderson was managing director.

1915 Built 6 of the 'X' lighters for naval use, 4 were powered and 2 were dumb craft. They were an early form of landing craft.

1922 Head, Wrightson and Co acquired the interest in Whitwell and Co previously held by Amalgamated Industrials[13].

1955 Four industrial groups formed to exploit the information being made available by UKAEA on design of nuclear power "furnaces" - Industrial Atomic Energy Group involving AEI and John Thompson with electrical generating expertise from Metropolitan-Vickers and BTH; English Electric Co and Babcock and Wilcox; C. A. Parsons and Co and Head, Wrightson and Co; GEC and Simon-CarvesLtd[14].

1961 General engineers, designing and manufacturing equipment for winning and processing coal, oil and iron ore; reactors and other atomic plant; builders of bridges and other steel structures. 636 employees. [15]

1968 The firm employed nearly 6,000 people and mostly made boilers and other heavy engineering. Its factory covered 68 acres.

1983 Owned by Davy Corporation. Under the Lazard scheme to reduce capacity in castings, the Thornaby and Billingham foundries were closed[16]