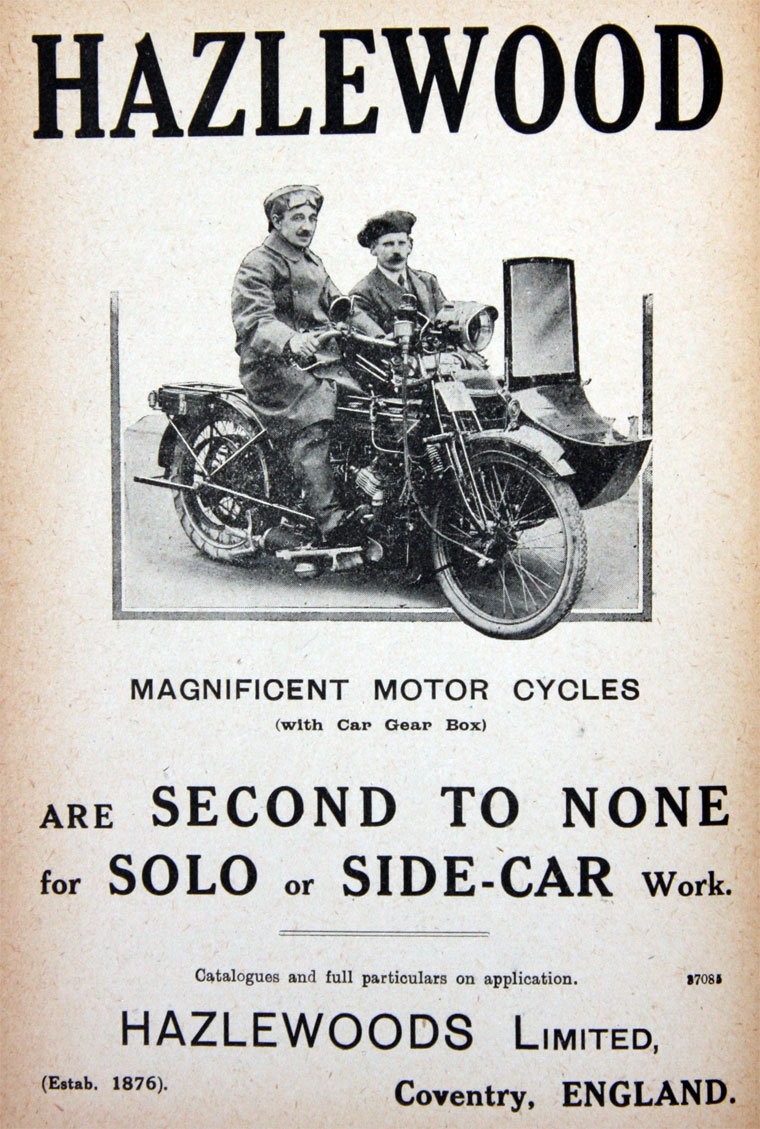 Hazlewoods of Coventry were motorcycles produced from 1905 to 1924

1911 The Hazlewood was first introduced as one model fitted with a 2.75hp JAP engine, belt drive to a three-speed Armstrong rear hub and Druid forks. The pedals were retained.

1912 Spennell's lists them at West Orchard, Coventry (Tel. 109) and manufacturers of motorcycles

1912 A Colonial model was in production for South Africa.

1912 Listed in Spennell's directory of Coventry as Cycle Manufacturers. [2]

1913 A twin was added to the range, powered by a 3.5 hp or 5 hp JAP]] engine. The smaller version retained the hub gear, but the larger fitted the hub as a counter-shaft gearbox driven by chain, and keeping the belt final-drive.

1915-1916 For both years there was also a single with a 3.5hp JAP engine driving the counter-shaft gearbox.

1920 After the war they returned to the listings with only a 5-6hp, 654cc V-twin fitted with their own three-speed gearbox with chain-cum-belt drive.

1921 The range was extended to add a larger 976cc V-twin and the option of all-chain drive for both.

1921 Only chain drive was used and the twins were joined by 292cc and 488cc sv singles with JAP engines.

1926/7 They re-formed as the New Hazlewood Cycle Co

'In 2005 whilst at work and having a bad day an old guy comes into the garage and says “I hear you collect old bikes" and gave me this Hazlewoods bike. I was 21 at the time. The first thing I noticed were the tyres, (they are the bikes original pair). The bike has it's original wheel stands that keep the weight off the tyres. The bike has been in a loft for 80 plus years and is 100% original.

'The quality of the parts is mind blowing. Roman alloy rims with double ridge, Brooks saddle with lettering brass badge, Nickel plated, Lucas carrier and the most amazing pump brackets I have ever seen.

'Both tyres still hold air but I had to put a small patch on the rear inner tube which is grey and feels like silk. There was a small perish about the size of a pinkie nail. I did not disturb any bolts I just took the tyre of the rim. The front tube is red and has no hole at all.

'The tyres when new were a advertising gimmick and also the beginnings of more advanced tread patterns. They had a shallow tread when new and would wear down very quickly. The front is just visible the rear is bald but shows no canvas or cracks. The lettering on the tubes and tyres is beautiful. Pure cotton, steel and rubber.

'The bike dates from between 1905 - 1911 as the Armstrong hub was only produced in that period. The tyres will next year be guaranteed to be 100 years old in 2011. I have never ridden the bike as I think it is to rare to use.