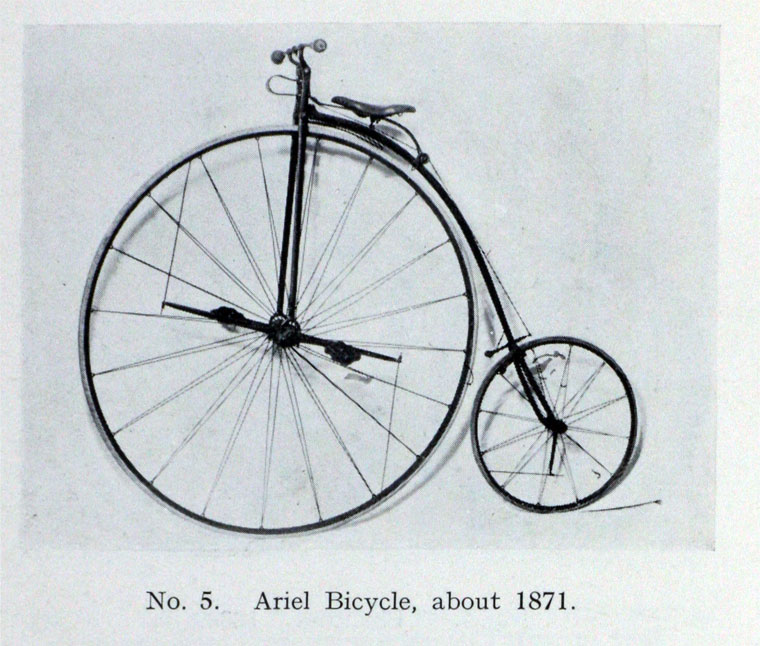 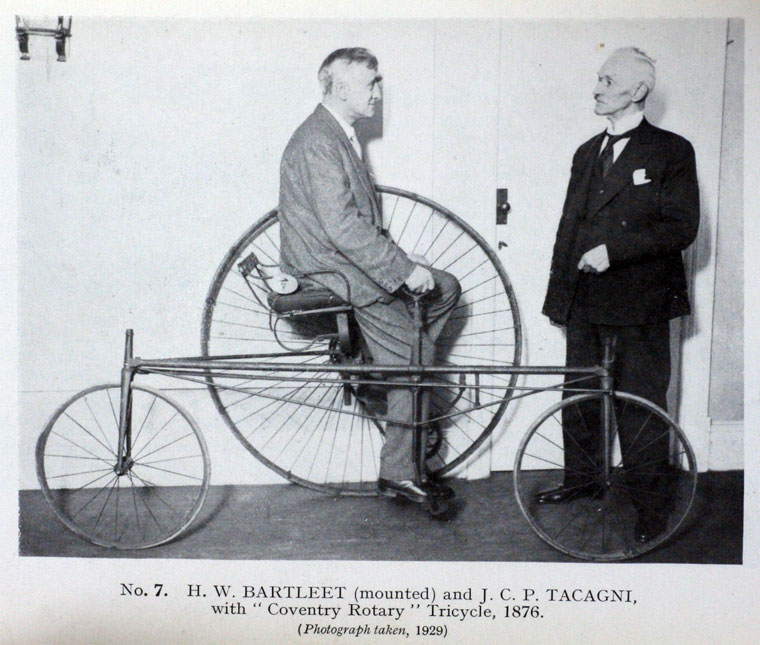 Bartleet on a 'Coventry Rotary' Tricycle of 1876. From 'Bartleet's Bicycle Book' No. 7.

1871 James Starley and William Borthwick Smith went into business as Smith, Starley and Co at St. Agnes Lane, Hales Street to manufacture the "Europa" sewing machine which had been patented by James Starley that year and the "Ariel" bicycle. The "Ariel" was licenced to be manufactured by Haynes and Jefferis. For a summary of the various users of the Ariel name see Ariel - an overview.

1875 Advertisement for the Ariel bicycle. The agent in Belfast was Richard Patterson and Co [2]

1876 Haynes and Jefferis made a few 'low' bicycles to the patented design of Harry Lawson and James Likeman [5].

1877 John Kemp Starley worked for them with responsibility for the machinery before leaving the next year to set up his own company Starley and Sutton Co.

1879 April. Partnership between Henry Haynes, Thomas Alfred Haynes and Joseph Jefferis, under the style of Haynes and Jefferis, as bicycle and tricycle manufacturers, was dissolved and the assets disposed of. [10] [11].

1879 George Woodcock, a Coventry solicitor, having taken over the business of the Tangent and Coventry Tricycle Co, purchased the assets of the collapsed Haynes, Jefferis and Co[12].

1880 Bankruptcy. '...Liquidation by Arrangement or Composition with Creditors, instituted by Joseph Jefferis, formerly in partnership with Henry Haynes and Thomas Alfred Haynes, trading as Haynes and Jefferis, of the Angel Works, in the city of Coventry, Bicycle Manufacturers, and now of 131 and 132, Watery-lane, Birmingham, in the county of Warwick, and residing at 10, Hertford-terrace, Coventry aforesaid, Range, Knob, and Bicycle Fittings Manufacturer....'[13]

1880 George Woodcock bought Dan Rudge's Wolverhampton business from his widow, amalgamated it with the Tangent and Coventry Tricycle Co as D. Rudge and Co, and relocated the combined business to Ariel Works, Trafalgar Street, Coventry [14] (a short distance away).

1871 No. 5. Ariel bicycle, date about 1871, manufactured by Messrs. Haynes and Jefferis, Coventry, under licence from James Starley, inventor of the tension wheel, patent No. 2236/1870. Under this patent Starley at first used spokes of sheet brass about x inch wide by 1/32 inch thick: later he used similar strips of steel, and finally round wire. As at first made, the ends of the spokes, at the hub, were bent round to form an eye, which engaged with a horizontal stud on the flange; later the spoke ends were merely hooked into holes in the flange, as in the front wheel of this specimen. The spoke ends are covered with a brass cap, for neatness, but this is omitted in the rear wheel.

The method of tensioning the spokes should be noted: individual spokes could not be tightened separately. After the wheel was built, the crossbar — which is brazed to the spindle between the hub flanges — was moved by means of the two wires leading from its ends to the rim, thus tightening all the spokes at once, but not allowing for the probability of some spokes stretching more than others.

It was for the Ariel bicycle that James Lyne Hancock made his first round rubber tyre with soft spongy rubber on the under side and toughened rubber on the tread, an idea which has been copied in the tyre trade ever since, even with pneumatics. In the same specification as the lever tension wheel (patented by Starley and William Hillman) Starley patented a speed-gear which caused the front wheel to revolve twice to one revolution of the cranks surely the first instance of "gearing up"! An Ariel, fitted with this gear and eight inch cranks, was ridden by J. T. Johnson at Molyneux Grounds, Wolverhampton, about 1872, when he won a race advertised as for the "Championship of the World." [15]