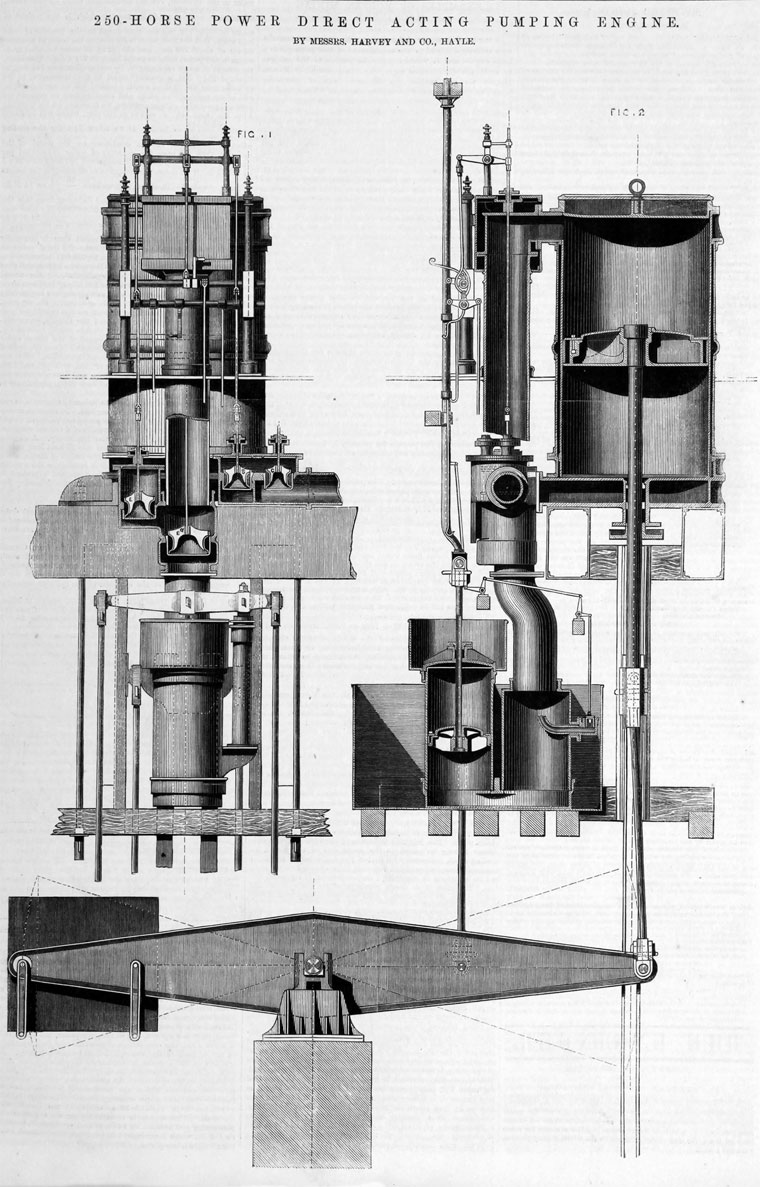 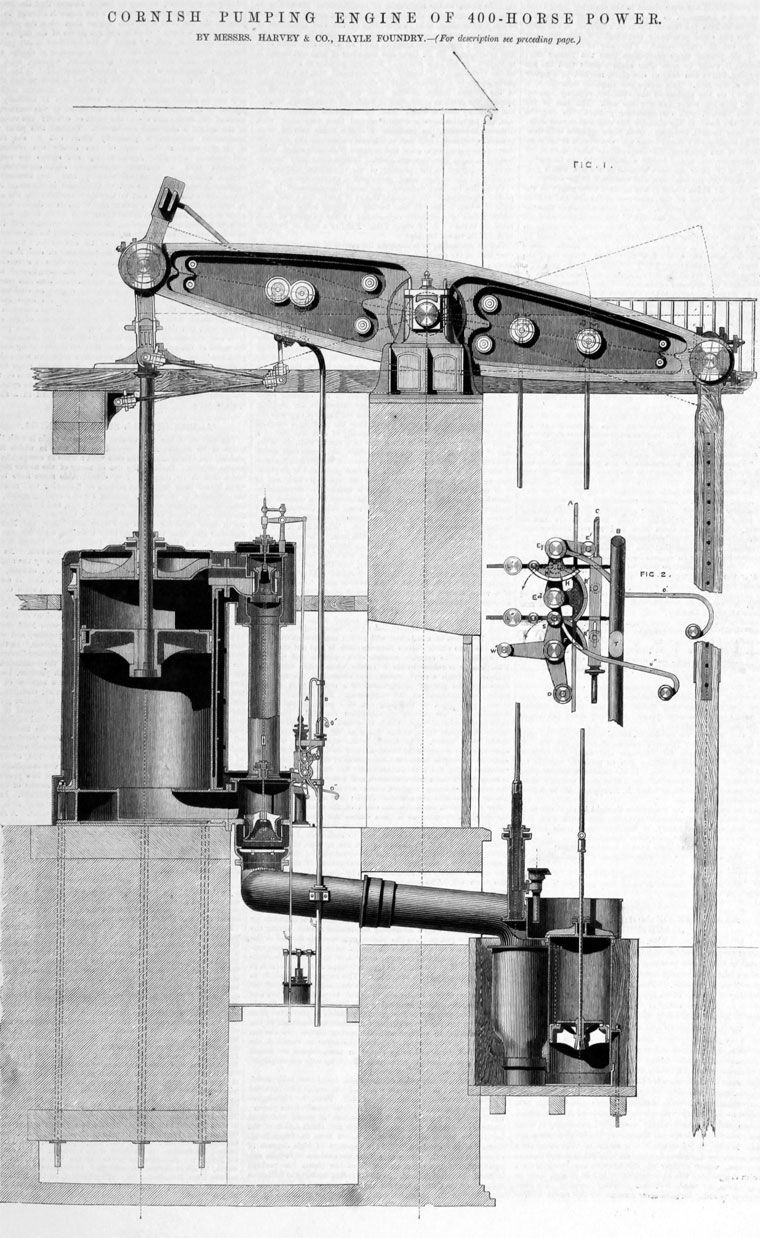 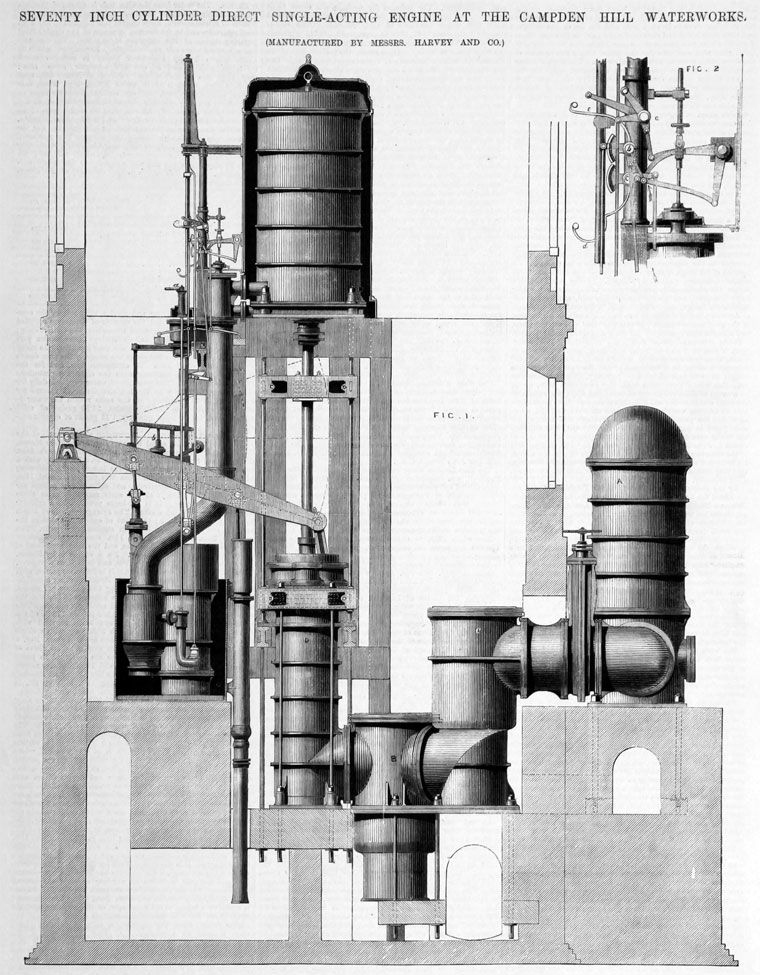 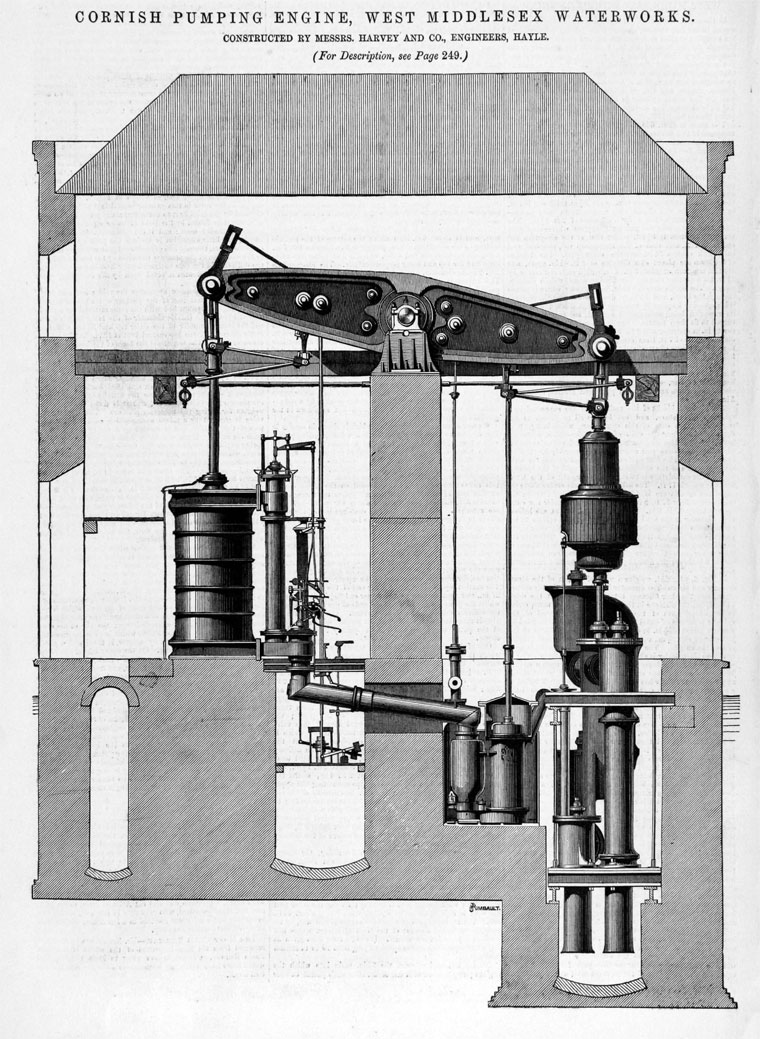 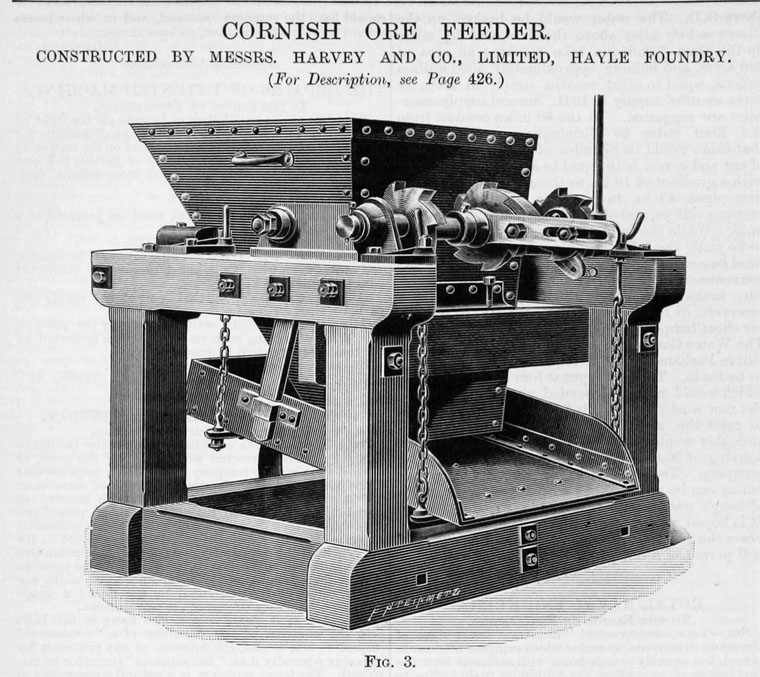 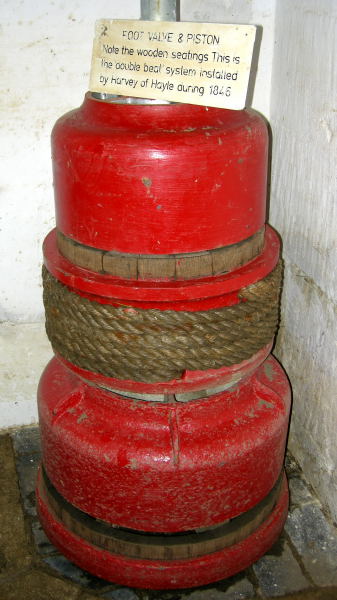 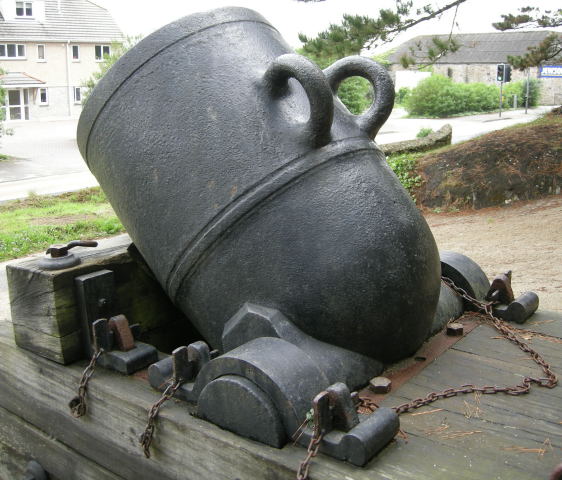 Harvey and Company of Hayle (an inlet of St. Ives Bay on the North coast of Cornwall).

Harvey and Co built up a reputation for world class stationary beam engines designed to pump water out of the deep Cornish tin and copper mines. The Cornish beam engine became world famous and was exported overseas and they remain the largest beam engines ever constructed. There is a fantastic example of their work at the Levant Mine. It is operational and not been moved since its initial installation in 1840.

Harveys also produced a range of products, from hand tools to ocean going ships including the USS Cornubia (1858). The company was expanded by John's son, Henry, in collaboration with Arthur Woolf and at that time it was the main mining engine foundry in the world, with an international market served through their own port at Foundry town, Hayle.

1779 John Harvey, a blacksmith from nearby Carnhell Green established a small foundry and engineering works.

1800 The company employed more than 50 people and continued to grow as Harvey worked with many of the great Cornish engineers and entrepreneurs of the day. These included Richard Trevithick, William West and Arthur Woolf.

Harvey's of Hayle reached their peak in the early to mid 1800s and then, along with the Cornish mining industry, suffered a gradual and slow decline.

1809 September 30th. Sold five-eights of the business to Hannibal Curnow Blewett who then sold smaller shares to Andrew Vivian, Thomas Ellis and Philip Richards. The company was then known as Blewett, Harvey, Vivian and Co and sometimes as the United Mining Company but this partnership was dissolved in 1812 but company documents kept the name until 1816 when Harvey and Co was used. Following the cessation of the partnership, Thomas Ellis, Elizabeth Harvey (Henry's sister) and William West became partners with Henry Harvey.

c.1813 R. W. Pickwood of St. Kitts ordered a steam engine from Richard Trevithick who placed an order with Harveys of Hayle to make it. Because of a dispute between the partners at Harveys (Blewett, Harvey and Vivian) the engine was eventually made by Hazledine and Rastrick but it was too late for shipment and was then sold to the Mint at Lima.

1814 August 11th. ? ordered a new brig, twice the size of Henry and the sloop Elizabeth. His earliest sloop, the Providence is not recorded at this date. The new brig is ordered from Chapman and Ellis of Bideford and was launched in Spring 1815 and named Fame.

1816 Arthur Woolf becomes superintendent in overall charge of the foundry

1816 Autumn. The new foundry was complete and Henry Harvey set up as a tin-smelter and was in production by October. The tin ore was from Wheal Vor.

1817 Takes an interest in Wheal Squire

1818 the Cornish Copper Co sought to prevent Henry Harvey from constructing a new quay at Hayle - hundreds of workmen from both sides became involved and an actual clash was only narrowly averted.

1819/20 The Elizabeth sank at Morwenstow. Henry Harvey commissioned a replacement schooner called John Adams (named after a farmer who had made a rescue of the crew of Elizabeth, and who Henry Harvey helped out in later years when he fell on hard times) from Thomas Williams of Neath.

1829 the dispute with the Cornish Copper Company flared again over the ownership of the quay and land at Hayle. This was the culmination of years of acrimonious competition between the two companies, with channel diversions, poaching of workers and sharp practices, including the riots in 1818.

1832 After a long legal battle, concerning the St Erth/Phillack boundary line, the Harvey's were granted a portion of the quay, which had overlapped into St Erth and Harvey's property.

1834 Began shipbuilding in order to build coasters for the local trade. The Harvey family were also general merchants, engineers and foundry owners.

Mr. James Morcom erected the big pumping-engines to drain the Haarlem Meer for the company.

1867 Harvey's acquired the Cornish Copper Co. bringing to an end the competition between 2 major businesses in Hayle harbour which had continued for many years.

1870 Engine for Metropolitan Water Board (Hammersmith)

1875 The Cornish Copper Co's premises were put up for sale

1883 Limited liability was taken out. The yard then built a number of steel tramps and then made engines for a number of coasters.

1890 Article on the yard and its history in 'The Engineer'. Established over a century ago. [5]

1903/4 the shipyard and engine works were closed and the company changed direction moving into building and coal and timber.

The company continued to trade as general and builders merchant

1969 Merged with UBM to become Harvey-UBM.