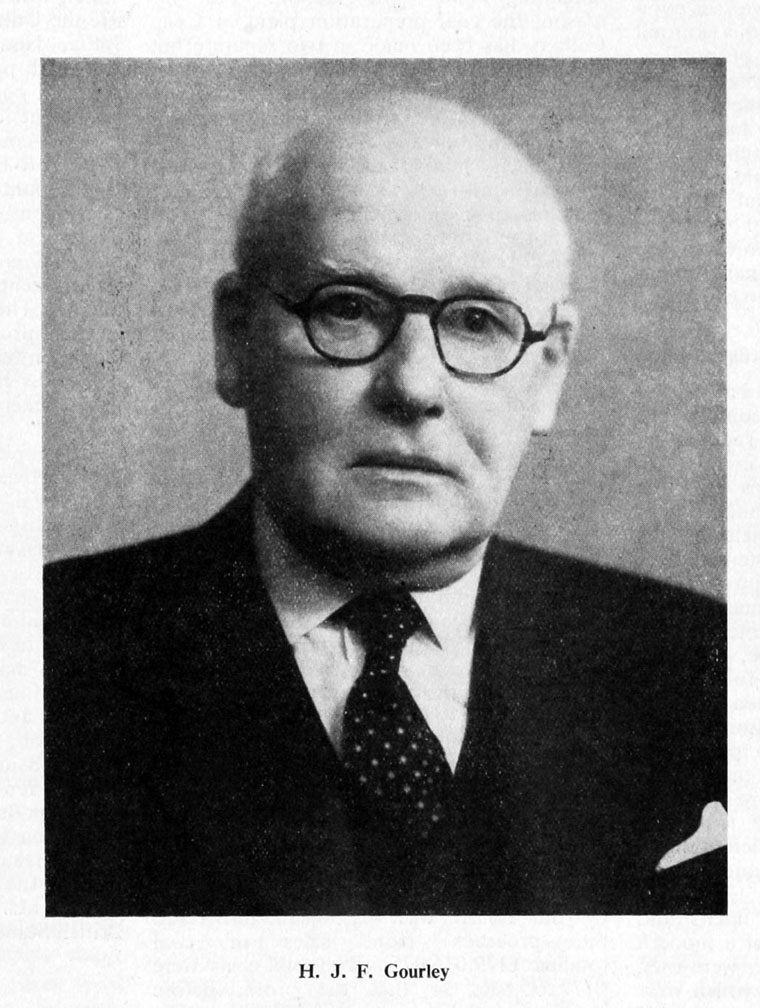 A very wide circle of engineers will have learned with regret of the death of Mr. H. J. F. Gourley, on December 18. Mr. Gourley was president of the Institution of Civil Engineer for the present session, and only last month he delivered his presidential address to the institution. He was a consulting engineer of considerable influence, specialising principally in water supply. The firm of which he was senior partner is noted for its work in this field, and in allied engineering design, such as irrigation and public health, many of its jobs being overseas.

Harold John Frederick Gourley was born at Liverpool in 1886 and educated at the Liverpool Institute before passing on to that city's University, where, in 1909, he graduated as B.Eng. with first-class honours. He was engaged in hydraulic research at the University for the following year, during which time he gained a Miller prize for a paper on concrete and reinforced concrete piles, presented to the North Western Local Association of the Institution of Civil Engineers at Manchester.

During the first world war he served in France from 1915 to 1918, eventually commanding the 438 Field Company, Royal Engineers.

Upon demobilisation he returned to Sir Alexander Binnie, Son and Deacon, and from 1920 to 1924 was chief assistant engineer. He became a partner in 1924 and, since 1949, has been senior partner in the firm, which became renamed Binnie, Deacon and Gourley.

In his professional capacity Mr. Gourley has visited Italy, Ceylon, India, Burma, Malaya, Singapore, Hong Kong, Nigeria, South Africa, the Rbodesias, and the New England States. He has been responsible for advising many authorities and has given evidence before Parliamentary Committees. He was a technical assessor at the Croydon typhoid inquiry of 1937. He was a witness for fifty-seven water undertakings ( excluding the Metropolitan Water Board) at the Greater London inquiry (1947).

In March, 1949, he was a member Of the panel or four which inspected and reported upon the Kariba and Kafue hydro-electric projects.

Mr. Gourley's work for the Institution of Civil Engineers included membership of the Institution Floods Committee and the committee which prepared the 1938 Code of Practice for the design and construction of reinforced concrete structures for the storage of liquids. He was nominated by the Institution as a member of the Codes of Practice Committee set up by the Ministry of Works in 1942. As a student he was awarded two Miller prizes and has also been awarded two Telford premiums for papers on water supply. He was elected an associate member in 1913, and transferred to the class of Member in 1922. He was a member or the Council from 1941 to 1946, and again from 1949 until the present. He became a vice-president in 1952.

Mr. Gourley had a serious accident in 1951 when the Liverpool express was derailed at Weedon. He lost his right arm and left leg, apart from other injuries.

From a long career in which heavy responsibility has been borne in designing a great number of civil engineering projects, it is perhaps difficult to single out one or two examples to illustrate Mr. Gourley's individual contribution to the advance of his profession. However, two examples, which occupied his interests to the extent of authorship of papers at the Institution of Civil Engineers, can be cited. In 1939 he was joint author, with Mr. W. J. E. Binnie, of a paper on the Gorge dam at Hong Kong, and in 1934 he presented a paper on the water supply of Kano in Northern Nigeria. Both of these projects entailed engineering design which was unusual. For instance, at Kano alternative proposals for providing the town with an adequate water supply had to be investigated, and it was decided that a conventional impounding scheme was not the best or most economical choice. Instead, a number of intake wells were constructed in permeable subsoil in the bed of the River Challowa, and the yield from then was pumped to a service reservoir. Previous to this work the water supply of Kano had been precarious the district has been described as one of the driest places imaginable - and water was sold in times of drought at a price of 9d. for a 4-gallon skinful. It was remarked in the discussion at the time that Mr. Gourley's work amounted, in effect, to finding an underground reservoir and an underground filter at one and the same time and making use of these two natural resources.

The Hong Kong water supply proposals included construction of a large dam, known as the Gorge dam or Shin Mung dam, with a height of 275ft. An original form of construction was chosen for this dam, largely because of the economic conditions of the area, but also because of the possibility of seismic disturbances. The dam was a rockfill structure, but on its upstream side it consisted of a "thrust block," built of permeable concrete a massive block form formation level up to a bout half the full height with concrete buttresses resting on it, up to crest level. An impermeable diaphragm was constructed, supported on the upstream side of this concrete work, and a wedge of sand was placed between the buttresses and the rock fill, to compensate for any settlement or movement of the thrust block.

Mr. Gourley's firm has also been responsible for more recent water supply works at Hong Kong, and at the present time an extensive scheme is in progress, involving a gravity dam with an ultimate height of 180ft, and subsidiary dams, tunnels, and other works.

A presidential address affords its author unique opportunity for expressing views accumulated during a lifetime's professional experience, and of describing technical innovations from first hand. Many readers of this notice will recall Mr. Gourley's address, published in abstract only last month in this journal. Suffice it to say here that Mr. Gourley dwelt on recent improvements introduced into civil engineering and used especially in water supply. But he was also concerned with the status and prestige of the civil engineering profession. He thought that the right class of experience was more important for young engineers than the size of the salary received at that stage of their careers. He also held that posts in the nationalised industries, and suchlike large organisations, tended to canalise the duties of the civil engineer, so that he was likely to be employed below his technical capacity.

Leaders of the profession were not nationally-known figures as in other professions, he noted, but there was probably no cause for complaint; there was such immense satisfaction in the conception and execution of schemes that engineers beca1ne indifferent to recognition.

Mr. Gourley leaves a record of service as a consulting engineer of the highest order. In fact, the recent achievements which can be attributed to him and to his firm indicate the healthy state of the profession, at home and overseas, in the contemporary scene. At the Institution of Civil Engineers, too, his death will be sadly felt; this is, we understand, the first occasion when the Institution has suffered the loss of its president. The untimeliness of Mr. Gourley's death is doubly felt, for he made a remarkable recovery from the serious railway accident inflicted on him in 1951, in showing a courageousness which deserved, at least, a happy year in the highest post which a civil engineer can reach.