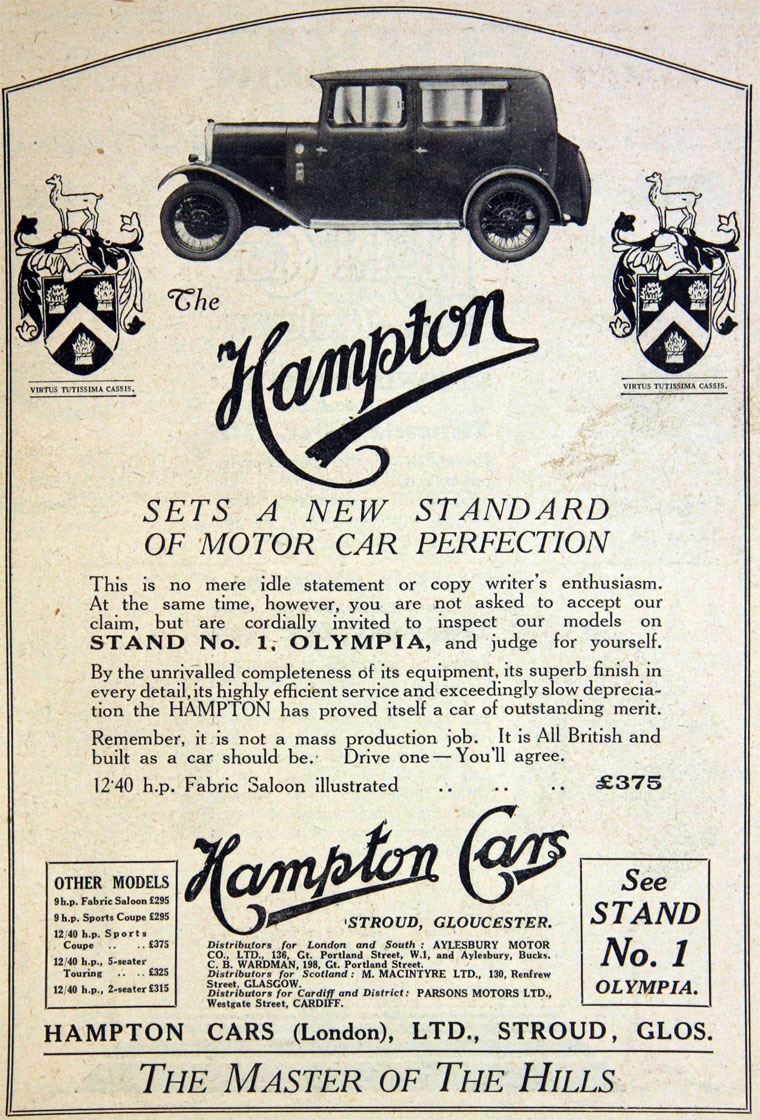 In 1919 the company was re-established as a joint venture between William Paddon and Charles Apperley of the Stroud Metal and Plating Co and production was transferred to Dudbridge, Stroud.

The first post war car was the Hampton 11.9 with either a 1,496 cc or 1,795 cc Dorman four-cylinder engine but only a few were made before the money ran out and the company was bought by a major shareholder John Daniel and re-registered as Hampton Engineering Co (1920) Ltd. William Paddon left to join the Autocrat Light Car Co of Birmingham.

1924 In spite of sales of around 300 cars a year, Hampton failed again in 1924 but was reformed by Millward and Leno as the Stroud Motor Manufacturing Co.

A new, larger, model was announced, the Hampton 14, still with a 1,496 cc engine, but now from Henry Meadows.

The company moved to smaller premises at Selsley Hill and introduced a more up-market three-litre car with a Meadows six-cylinder engine alongside the old 14 which was now called the 12/40 or with smaller 1,247cc engine, the Nine. This did not help finances and the receiver was in again in 1930.

c1930 Miraculously, Hampton rose again now registered as the Safety Suspension Car Co. Fifty Straight 8 2,496cc engines and 100 chassis were ordered from Rohr of Germany to make the Empire Sportsman model. The spare 50 chassis were to be fitted with Continental 2,414cc six-cylinder engines. One or two at most were made before the company failed for the last time and closed in 1933.

During its history, Hampton made about 1,100 cars. Five cars are thought to survive