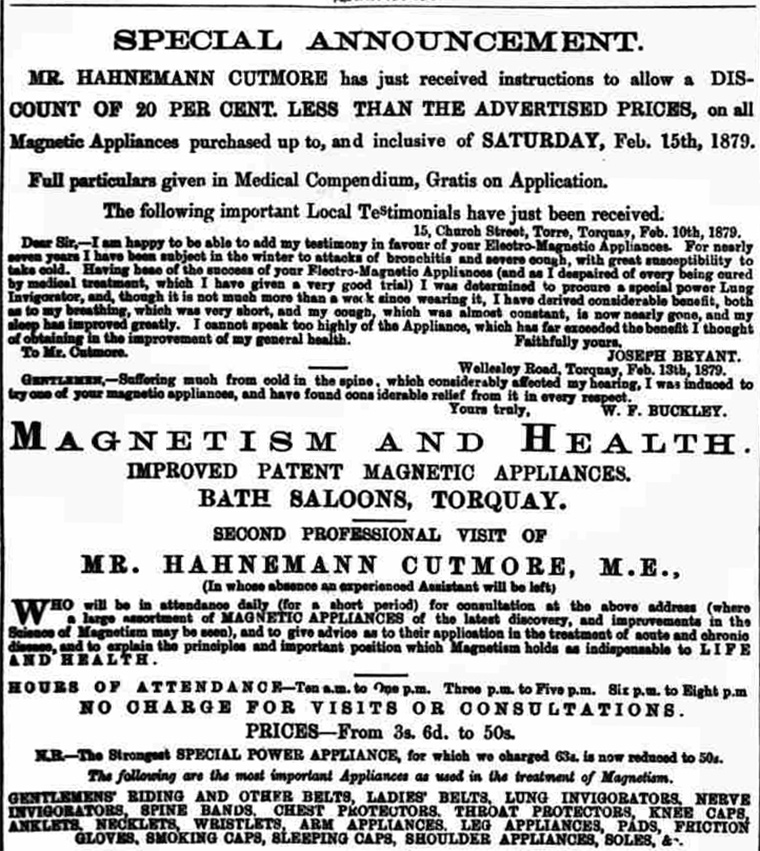 1852 Born in Marylebone the son of Charles Richard Cutmore, a Physician and Surgeon, and his wife Isabella Morland

1871 Living at Sussex House, Croydon, and listed with his parents and siblings, Medical Assistant.[2]

1878. Advertisement. 'MR. HAHNEMANN CUTMORE (Representative of Messrs. Wetton and Co., of 98, High-street, Cheltenham, Inventors, Patentees, and Sole Manufacturers of The Magneticon, for the cure, relief, and prevention of acute and chronic disease, will be in attendance dally at the above address, for the purpose of giving advice as to the application of Magnetism, and to explain the principles of the Magneticon Appliances, of which has a large assortment'[3] There a number of advertisements of this type where he appears in various towns in England to promote this treatment. In 1879 he is representing Mesmer and Co for similar magnetic devices. This is the last year he advertises these devices.

1885 Takes unassisted passage from London to Sydney on the 'Garonne'

1888 Patent. 1,084. Hahnemann Adolphus Cutmore, Melbourne, Victoria. 'Improvements in and relating to the construction of the mouth-pieces and ear-pieces or receivers of speaking-tubes, and in the method of and apparatus for Signalling or Calling-Up in such instruments'[4]

1891 Patent. 'of South Yarra, Melbourne, in the Colony of Victoria, have invented certain new and useful Improvements in Speaking-Tubes'[6]

1904 Hahnemann Adolphus Cutmore trading as the Homacoustic Co of 115 Queen Victoria Street, London. Looks to be in financial difficulties.[9]