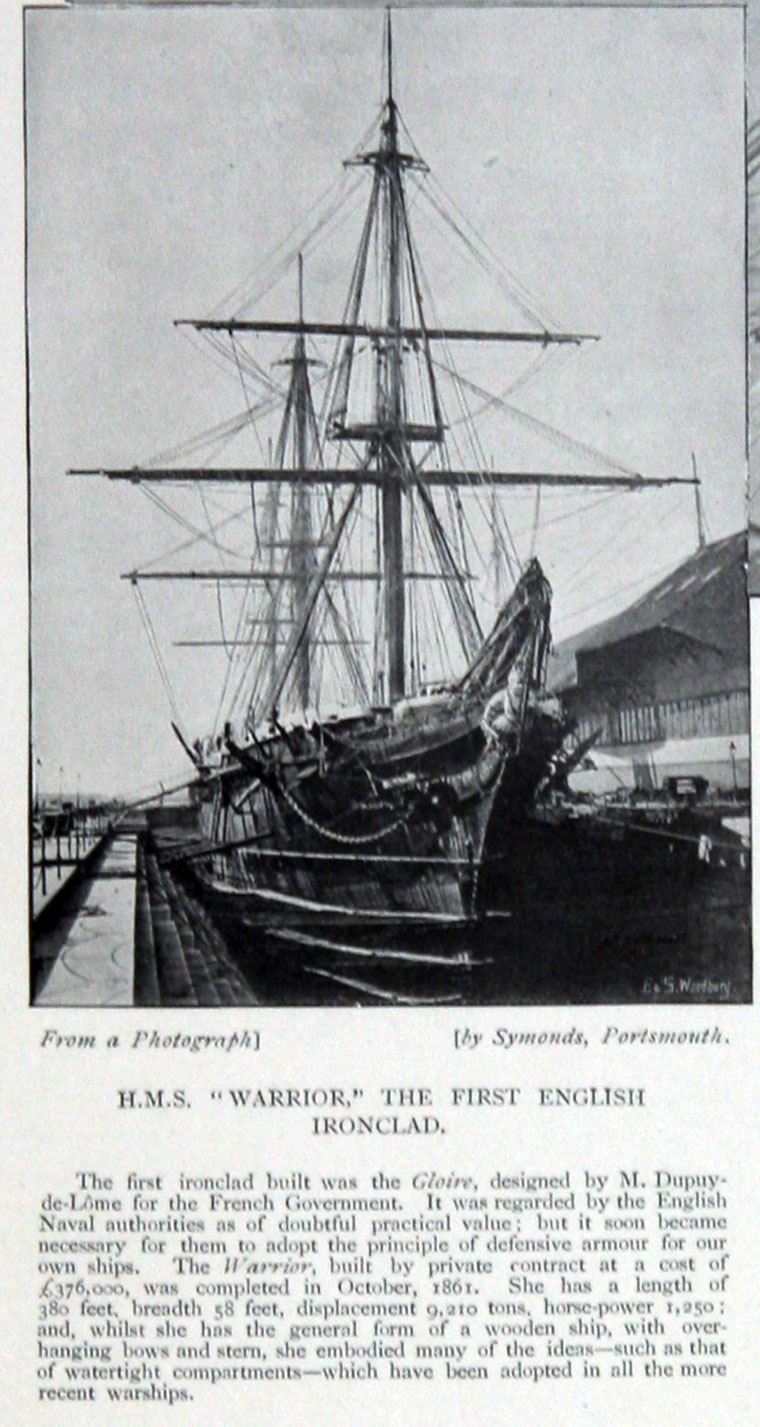 1859 The second ship in the Royal Navy to bear the name HMS Warrior was laid down on May 25th, 1859, at the Thames Ironworks, Blackwall. A sister vessel, the Black Prince, was put in hand at Glasgow somewhat later.

In those days these were justly regarded as mighty ships, for the Warrior was 380ft. long between perpendiculars and displaced 9210 ton

Powered by steam and sail, she was the largest, fastest and most powerful warship of her day and had a lasting influence on naval architecture and design. She was built to counter the latest French battleship.

1860 29 December: HMS Warrior, the Royal Navy's first ironclad ship of the line, was launched and moved to Victoria Dock for commissioning.

1861 Her steam engine was of the horizontal single-expansion type; it was built by Penn inside the ship. Steam was first raised on March 1st whilst the fitting of the armour plates carried on for the next few months. The masts and rigging were supplied by Chatham Dockyard. In August, Warrior moved out of the Victoria Dock under her own power. She left the Thames for Portsmouth on September 19th 1861. On trial the engines developed nearly 5500 horse-power and drove the ship at the then remarkable speed of 14.36 knots.[1]

After 22 years’ service, Warrior’s was withdrawn from active service.

1905 The third ship to bear the name HMS Warrior was a HMS Duke of Edinburgh-class armoured cruiser launched in 1905.

1916 She was disabled at the battle of Jutland in 1916 and foundered a day later.

1979 Portsmouth was the second Warrior's home port for her entire Naval career, as she was part of the Channel Fleet. She was handed over for preservation as Warrior.

Painstakingly restored in Hartlepool and preserved at Portsmouth since 1987, Warrior is a unique survivor of the once formidable Victorian Navy and now serves as a museum ship and visitor attraction.