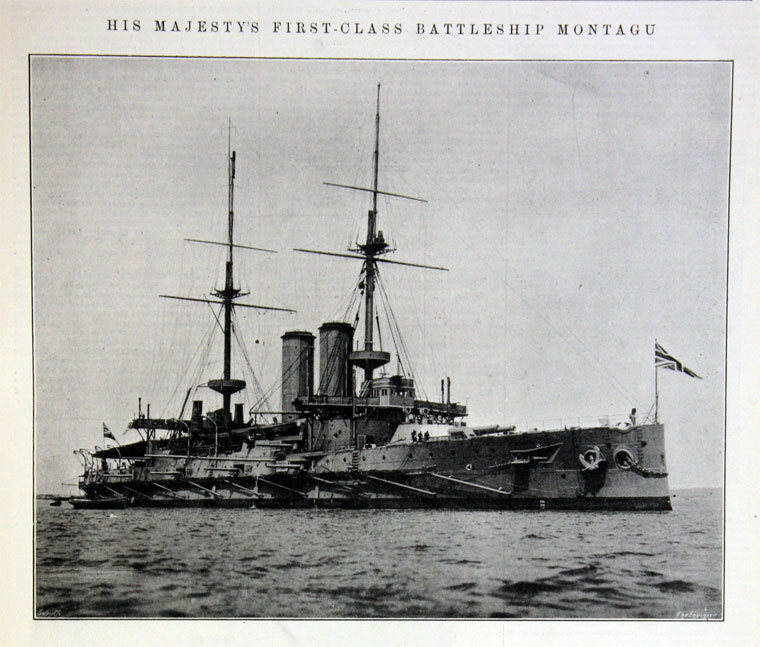 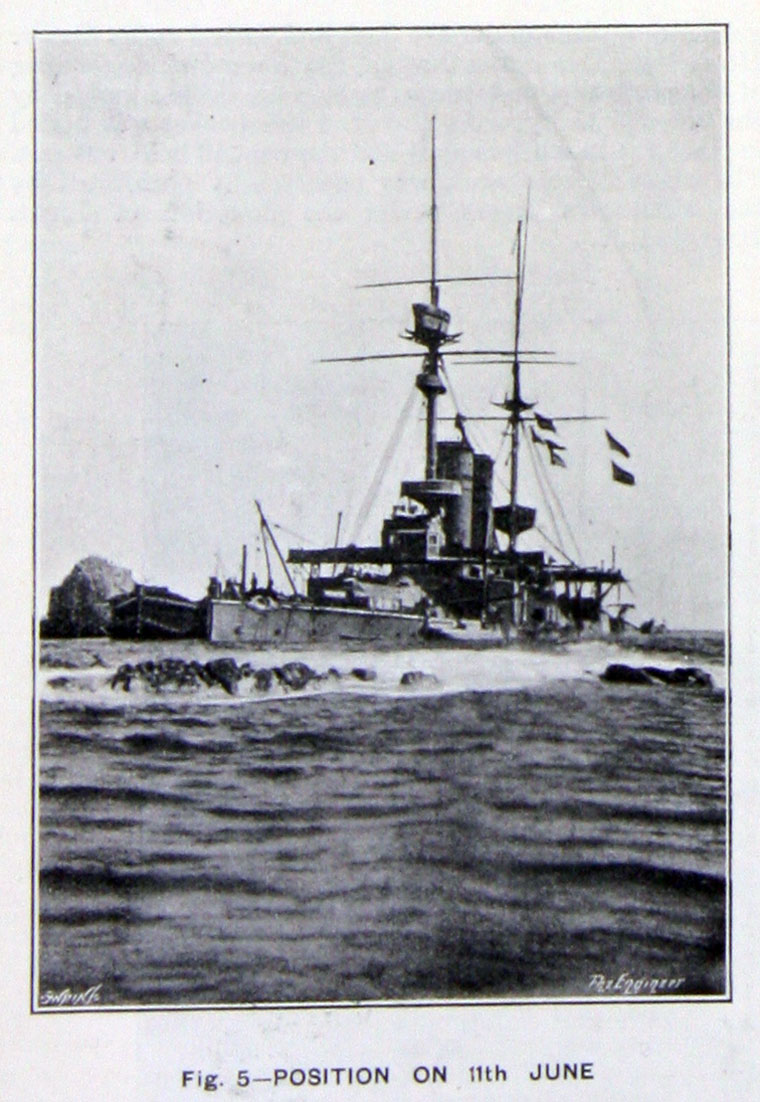 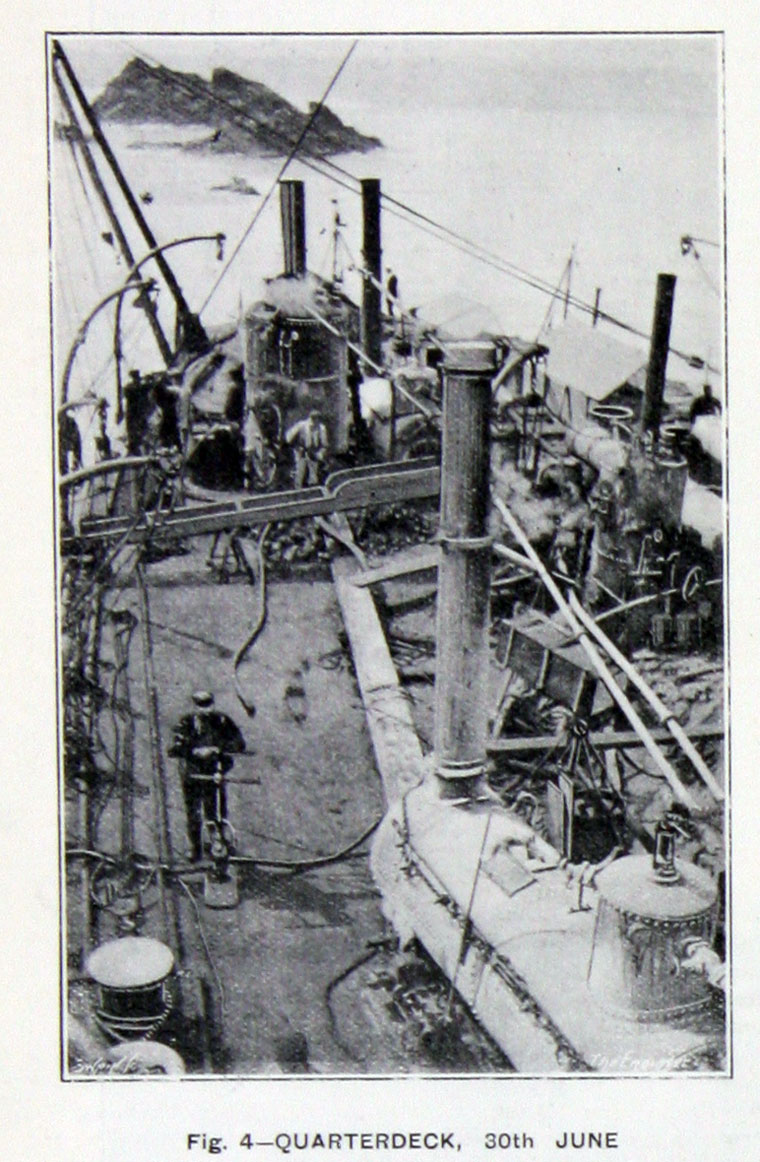 HMS Montagu was a Duncan-class Pre-dreadnought battleship of the British Royal Navy.

In May 1906 in thick fog, she was wrecked on Lundy Island without loss of life.

Montagu and her five sisters of the Duncan class were ordered in response to large French and Russian building programmes, including an emphasis on fast battleships in the Russian programmes; Montagu and her sisters were designed as smaller, more lightly armoured, and faster versions of the preceding Formidable class.

Montagu had an armour layout similar to that of the preceding London subclass of the Formidable class, with reduced thickness in the barbettes and belt.

Montagu and her sisters had machinery of 3,000 more indicated horsepower than the Formidables and Londons and were the first British battleships with 4-cylinder triple-expansion engines. They also had a modified hull form to improve speed.

The Duncans had a reputation as good steamers, with a designed speed of 19 knots and an operational speed of 18 knots, good steering at all speeds, and an easy roll. They were the fastest battleships in the Royal Navy when completed, and the fastest pre-dreadnoughts ever built other than the Swiftsure-class HMS Swiftsure and HMS Triumph.

Montagu and her sister ships had the same armament as and a smaller displacement than the Formidables and Londons.

As a pre-dreadnought, Montagu would have been outclassed by the dreadnought battleships that began to appear at the end of 1906, but she was lost that year, several months before HMS Dreadnought's commissioning ushered in the new battleship era.

HMS Montagu commissioned on 28 July 1903 at Devonport Dockyard for service in the Mediterranean Fleet.

In February 1905, she transferred to the Channel Fleet.

At 0200 hours on 30 May 1906 during radio communication trials carried out in thick fog, Montagu was steaming at high speed in the Bristol Channel when she ran into Shutter Rock on the southwest corner of Lundy Island. The force of impact was so great that her foremast was raked forward. The ship settled hard aground, with many holes in her hull, the worst of which was a 91-foot long gash in her starboard side.

The ship's captain, believing Montagu was stuck at Hartland Point on the mainland of England, sent a party on a rowing boat to the north, instructing them to contact the Hartland Point Lighthouse. They instead got to the North light on Lundy Island, where officers asked the lighthouse keeper to inform the British Admiralty that they were aground south of Hartland Point. An argument ensued with the keeper until he pointed out he knew what lighthouse he kept.

The court martial convened for the affair blamed the thick fog and faulty navigation for the wreck, and her captain, Thomas B. S. Adair, and navigating officer, Lieutenant J. H. Dathan, were severely reprimanded and dismissed from the service, Dathan losing two years' seniority.

It quickly became apparent that the damage to Montagu was even worse than initially feared. Divers went over the side at daybreak and found that a rock had pushed the hull 10 feet inward. Help arrived on the afternoon of 30 May 1906, but the ship settled in such a way that water rose and fell through the holes in her hull; within 24 hours her boiler rooms, steering compartment, starboard engine room, and forward capstan engine room, as well as other compartments, flooded, and she began to list to starboard. All movable objects were secured and the port engine room flooded to stop the list from increasing. Sometimes only her upper deck was above water.

The Royal Navy had no experience of salvage and no salvage arm. They had been impressed by the Russian success in recovering major warships damaged at the Battle of Port Arthur and had studied a book by Frederick Young of the Liverpool Salvage Company, later to become Commodore Sir Frederic Young, the Admiralty's first Chief salvage Officer. The commander of the Home and Channel fleets Admiral Sir Arthur Wilson took charge of the operation with Young appointed as adviser. Not unnaturally as the officer in command, Wilson wanted to try his own ideas, many of which Young regarded as “wrong, impractical or both”. From June through August 1906, Montagu was lightened through the removal of her 12-inch and 6-inch guns, heavy machinery, parts of her boilers, heavy fittings, and some of her bow armour. Neither pumping nor attempts to blow water out of her machinery spaces using compressed air had any effect, and nothing that salvage experts tried succeeded in re-floating the ship. Her sister ship HMS Duncan herself ran aground whilst trying to help the salvage effort.

Wilson’s final idea was to fill the ship with cork which Young predicted would block the salvage pumps and the “battleship was lost needlessly”. At the end of the summer of 1906, salvage efforts were suspended for the year, with plans to resume them in 1907. However, an inspection of the ship conducted from 1 October to 10 October 1906 found that the action of the sea was driving her further ashore and bending and warping her hull so that her seams were beginning to open, her deck planking was coming apart, and her boat davits had collapsed. The Liverpool Salvage Company was given full responsibility for partial salvage.A guard was put aboard to prevent looting; later, the guard was taken off and replaced by men in boats and ashore.

By 1907, however, Montagu was in such bad shape that any hope of salvaging her was abandoned. The Western Marine Salvage Company of Penzance completed salvage of the wreck for scrap metal over the next 15 years.

Although diving clubs still visit the site of Montagu's wreck, all that remains there is armour plate plus a few live 12-inch shells on the sea bed. Four wooden panels from the captain's cabin are displayed in the Ilfracombe museum.

The Montagu Steps, which subsequently appeared on OS maps, were constructed adjacent to the wreck during the salvage.