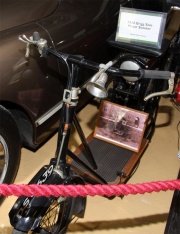 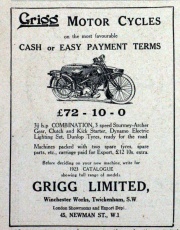 Designed and produced motorcycles from 1920 to 1925 in Twickenham, Middlesex and latterly in South Croydon, Surrey.

1920 The company entered the market with a basic scooter. It had a 145cc two-stroke engine mounted to the right of the rear wheel, magneto ignition and petroil lubrication. The fuel tank sat over the engine with the seat on top of it. It had single speed, no clutch and the transmission was by chain-cum-belt. The frame was open, with tubular with bicycle forks, a calliper front brake, but no weather protection.

1921 The engine was enlarged to 162cc to produce a lightweight motorcycle with a two speed gearbox in a duplex tubular frame, similar to the triangulated Cotton design.

The company diversified into range of products

1922 A three-speed version of the motorcycle was launched as they moved away from the dying scooter market.

1923 A larger range was available with models fitted with 247cc and 343cc Villiers, 195cc ohv Shaw and Blackburne four-strokes in various capacities, including a 696cc V-twin. During that year the company began offering machines with B and H (Bacher and Hellow) patented engines comprising single and V-twin designs, from 249cc to 998cc, all with detachable heads and some with water-cooling. These, however, made little impact on the established trade. At the end of that year the company moved to premises in South Croydon, Surrey, and an arrangement was made to build Wooler motorcycles.

1924 Public company formed Grigg (1924) Ltd [2] to take over and run the existing business; was the sole manufacturer of several motorcycles for which it had contracts including:

as well as the Grigg

1924 The full range was continued for that year but the writing was on the wall for the company. They attempted to keep going by providing general machining facilities.

1925 By now the slump in the motorcycle market had taken hold and Grigg failed to survive, along with a score or more small makers who could not survive the mid-twenties slump.

Griggs were popular with sidecar owners.

Despite the wide range on offer and an attractive design, not many Griggs were sold and the make was largely unknown outside the London area.

Students of vintage motorcycle design may see a likeness between the Grigg frame and that of the contemporary Cotton. Francis Willoughby Cotton had patented his distinctive design with straight tubes running from steering head to rear wheel spindle many years before. He had considered taking action against Grigg but the firm folded first.