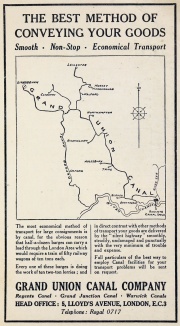 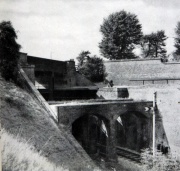 1961. Triple intersection of canal, road and rail at Southall. 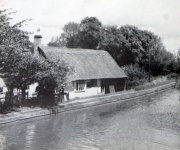 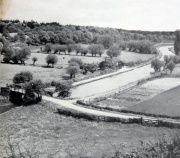 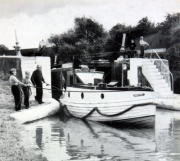 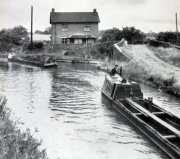 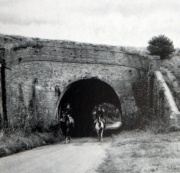 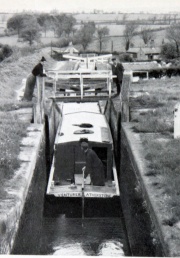 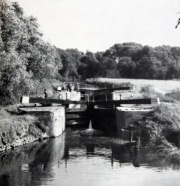 Established as a means of linking the Midlands to London for trade as the Oxford Canal Navigation, opened in 1790, was insufficient. An Act was passed and plans were made to tackle the new waterway in three sections; The Grand Union Junction, Napton to Birmingham, and North junction to Trent Lock.

1792 a survey was conducted for a link between Hampton Gay on the Oxford Canal to Islesworth on the Thames.

However, in 1793 the route from Braunston to Bedford on the Thames was favoured and this stretch was called the Grand Junction Canal. It is the longest stretch of the Grand Union Canal. It was completed in 1805 by engineer William Jessop and his assistant James Barnes, not without difficulty as it needed extensive cuttings and locks at Braunston Hill, Blisworth Hill and the Chilterns. Large tunnels were cut at Blisworth and Braunston which were very costly to the project in time and money.

By 1805 trade from Birmingham to London was via Warwick, Braunston and the Grand Junction.

1806 The aqueduct at Wolverton (Cosgrove Aqueduct) burst its banks during a storm and flooded the valley. Then two years later it collapsed completely. It was initially replaced with a wooden trunk, then by the heavy iron channel that is there today.

The Grand Junction Canal section had eight branches, the last being that of Slough in 1883.[1]

The section of the main line between Brentford and Braunston (Grand Junction Canal), was built as a 'wide' or 'broad' canal - that is, its locks were wide enough to accommodate two narrowboats abreast (side by side) or a single wide barge up to 14 feet (4.27 m) in beam [2].

The onward sections from Braunston to Birmingham had been built as 'narrow' canals.

1929 January 01st. The Grand Union Canal in its current form came into being and was further extended in 1932. It was formed from the amalgamation of several different canals, and at 286.3 miles (460.8 km) (281.3 miles (452.7 km) when excluding the shared line with the Oxford Canal), is by far the longest merged canal in the UK. It included -

1931 an Act was passed to widen and deepen the necessary sections.

The third section from Norton Junction to Trent Lock is 67 miles. The oldest part of this line is the Loughborough Navigation, which was opened in 1778.