Grace's Guide is the leading source of historical information on industry and manufacturing in Britain. This web publication contains 143,420 pages of information and 230,040 images on early companies, their products and the people who designed and built them. 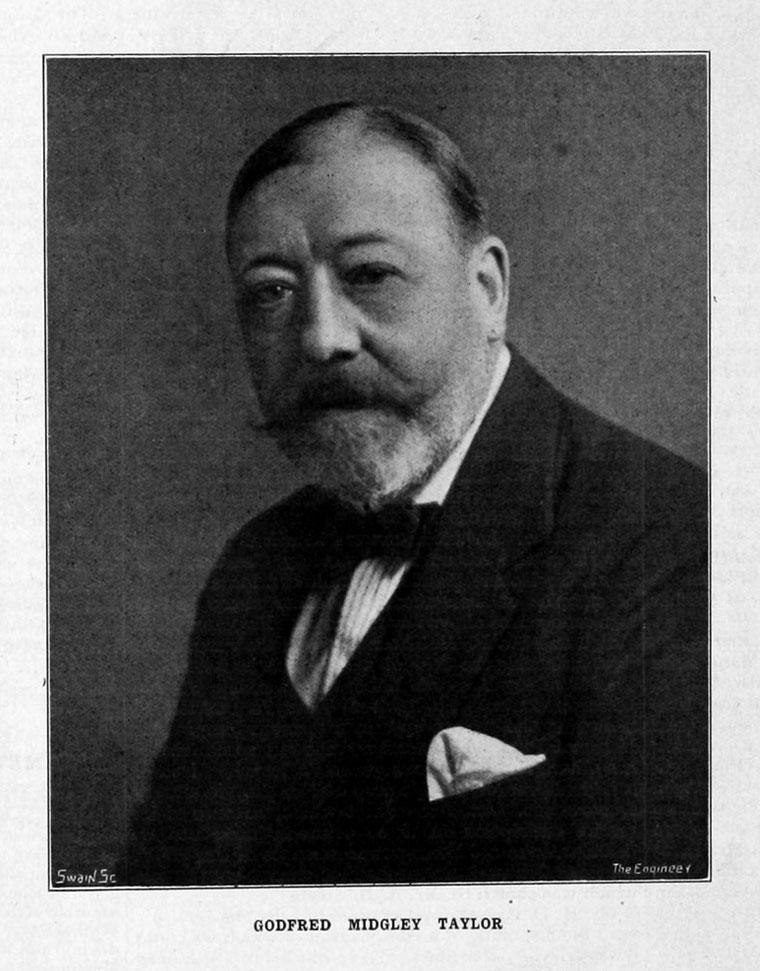 1910 Mr. Midgley Taylor presided at the opening of the first meeting of the Association of Consulting Engineers, pending the arrival of Sir William Preece.

The news of the death of Mr. Gotfred Midgley Taylor, at his home, 47, Hornton Court, Kensington, W.8, on June 11 last, will be received with regret by a wide circle in the profession. Mr. Taylor, who had been for many years a partner in the firm of Messrs. John Taylor and Sons, Caxton House, S.W.l, was born on December 16, 1861, and was the son of the late Mr. John Taylor, M.Inst.C.E., who was engineer to the Lambeth and New River Waterworks Companies, and many other water undertakings. Mr. Midgley Taylor received his technical education in the Applied Sciences Department of King’s College, London, which institution he entered in 1878; much of his time was devoted to mathematics and chemistry.

His first engineering experience was gained as resident engineer in charge of the construction and erection of pumping machinery, engine houses, filter beds, and other works for the Lambeth Waterworks Company, at Surbiton and West Molesey. He followed up this experience by assisting his father and elder brother, Mr. E. Brough Taylor, in their Westminster office at 27, Great George-street. During his early years at Great George-street, Mr. Midgley Taylor made use of his chemical training, and had an extensive laboratory fitted up in the office in which he carried out all his own analyses of samples of water. In 1884, the young engineer became a partner in the firm of Messrs. John Taylor and Sons. A few years after his father’s death, in 1890, he and his brother entered into partnership with the late Mr. W. Santo Crimp, M.Inst.C.E., and it was at this stage of his career that Mr. Midgley Taylor began to specialise in sewerage and sewage-purification works.

In conjunction with his partners, he became engaged on work connected with various drainage undertakings, and was appointed consulting engineer for drainage and water schemes at Manchester, Bristol, West Bromwich, Shrewsbury, and other towns. After Mr. Santo Crimp’s death, in 1901, he became one of the recognised authorities on sewage purification in this country, and, in the years which followed, he carried out a large number of works and advised many local authorities both at home and abroad. He was consulting engineer to the Glasgow Corporation during the construction of the main-drainage system, which was carried out at a cost of over 2 million pounds sterling. In this connection it is interesting to recall that a paper entitled “ The Main Drainage of Glasgow,” by Messrs. A. B. McDonald and G. Midgley Taylor, was read on March 19, 1912, before the Institution of Civil Engineers. Telford Premiums were afterwards granted to the joint authors for their communication. A few brief details of this important drainage undertaking, taken from Messrs. McDonald and Taylor’s contribution, will no doubt be of interest to our readers. They state that, for drainage purposes, the city and the surrounding districts are divided into three separate areas. The sewage purification works of these areas are situated at Dalmamock, Dalmuir, and Shieldhall. The Dalmamock station was opened in May, 1894, and the Dalmuir works came into being as a result of the Act of 1896. The Shieldhall station was put into service in May, 1910. Great difficulties were encountered in the construction of the works, as the invert level of the sewers was found, in many places, to overlie coal workings of unrecorded date. This necessitated an unexpected amount of special construction in cast-iron segments, instead of ordinary brickwork, and involved the use of pneumatic pressure over a considerable extent of the larger sewers. The construction of the pump room at the Shieldhall works was also rendered very difficult by reason of the large volumes of subsoil water met with.

In 1908, Mr. Midgley Taylor visited New Zealand and reported on the drainage of the City of Auckland. His report was adopted in entirety, and the scheme proposed by him was successfully carried out by the City Engineer. He also visited Singapore and Port Elizabeth, South Africa, to advise on drainage matters, and twice visited India to report to the Municipality of Bombay on the drainage of that city. Just prior to the European War, he spent several months in St. Petersburg, where he drew up a complete scheme for the water supply and drainage of that city and its suburbs. During the past 20 years, Mr. Midgley Taylor was a recognised authority on the question of borough extension, and most of the leading borough authorities in this country, who had extension schemes before the Local Government Board, the Ministry of Health, and Parliament, came to him for advice on the engineering principles relating to the proposals. He had a very high reputation as an expert witness before Parliamentary Committees, and was engaged in many controversies relating to water and borough extension schemes. He became an associate member of the Institution of Civil Engineers on April 5, 1887, and a full member on February 8, 1898. He was also a fellow of the Royal Sanitary Institute."