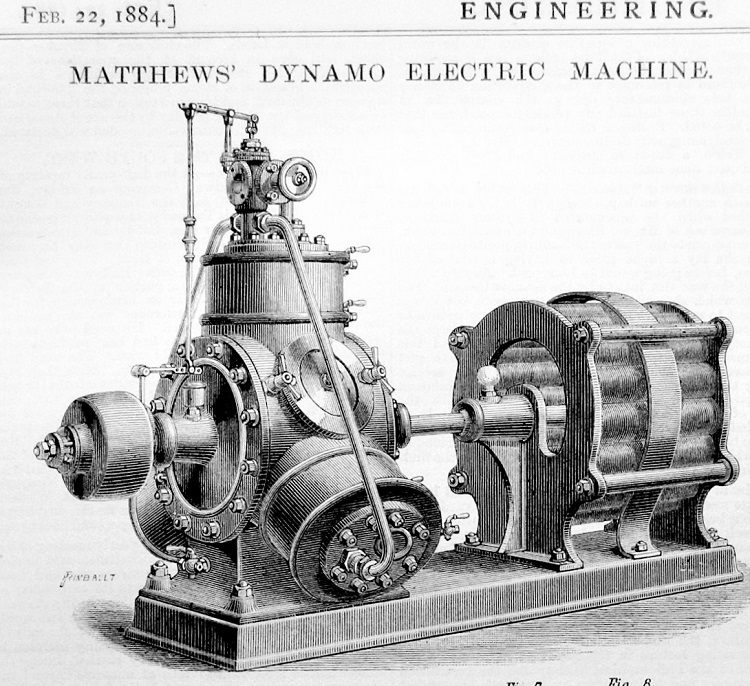 Makers of rope and wheel gearing at Hyde, Near Manchester.

1884 Robert Matthews designed a 'dynamo electric machine', having an alternator driven by a radial steam engine. The engine had the appearance of a three-cylinder 'Brotherhood'-type, but within lay the complexity of a compound engine with six pistons.[1]. See illustration.

1885 'THE INVENTIONS EXHIBITION. ...... Never anywhere in the world has there been any electric lighting to approach the electric lighting at South Kensington to-day. Never have machines to such an extent been worked together as those supplied with steam power by the Davy Paxman plan, in the Exhibition lighting shed, and therein also the Gulcher Company have a remarkable group of nine large dynamos, worked partly by Westinghouse and partly by Coalbrookdale high-pressure, quick-speed engines coupled directly to the machines, and running 450 revolutions in the minute All the two long lines of arc lamps in tbe Central Court - in length the whole extent across the gardens — are lighted by these machines. The Siemens new machines in the Western Quadrant are one of the sights of the place, and a source of admiration to electricians. Driven by three Goodfellow and Matthews compact three-cylinder engines, and steadied by three heavy steel discs, the smoothness and regularity of the running is remarkable.'[3]

1885 'THE ELECTRIC LIGHT ON WAR-SHIPS. The Admiralty recently invited tenders from various manufacturers for the supply of dynamo machines, engines, lamps, and fittings for no fewer than fifty-two vessels, one of the contingent conditions being rapid delivery. On Monday and Tuesday orders for the installations on thirty-two ships and twenty of the new type of torpedo-boats in course of construction for picket service were given. The twenty torpedo-boats are to be fitted with Brush dynamos and Willans engines. Three gun-boats of the Tay type are to furnished with the same motor; the Brush Company are furnishing dynamos, driven also by Willans engines, to feed the search lights of two large sea-going tugs ; while seven large ships will have Crompton dynamos and Willans engines. Three of the River type of gun-boats will be furnished with power by Messrs. Goodfellow and Matthews, and seventeen other ships will be fitted by Messrs. Siemens ; the power being furnished by Mr. Brotherhood and Messrs. Goodfellow and Matthews.' [4]

1885 'MECHANICS. A Giant Pulley.— A grooved flywheel of remarkable size and weight is in course of manufacture by Mesars. Goodfellow and Matthews, of Hyde. The diameter is 34ft., and the weight eighty-three tons, while the circumferential velocity will be 5,330 ft., or over a mile a minute. The face is grooved for thirty-two ropes, each 1 3/4in. in diameter, and capable of driving forty horse power. The flywheel is intended for the factory of the Astley Mills Company, near Hyde Junction, and is made in fifty pieces.'[5]

1885 'Large Mill Engines.—Yesterday a pair of very massive engines, which have been constructed by Messrs. Goodfellow and Matthews, of Hyde, were, in the presence of a large company representing the principal mills in the district, started at the Astley Mills, now being completed at Hyde Junction. These engines, which are exceptionally powerful, are of the compound horizontal type, with valves on the Corliss principle, and they are capable of indicating 1,300 horse power, with a speed of 50 revolutions per minute and a steam pressure of lOOlbs. per square inch The machinery of the mill will be driven by rope gearing, and the driving-pulley is 34ft. in diameter, with a velocity on the periphery of rather more than a mile per minute. This driving-pulley weighs upwards of 80 tons and is grooved for 32 ropes. The high-pressure and low-pressure cylinders of the engines are 32in and 60in. diameter respectively, and have a 7ft. stroke. The shaft is of Whitworth fluid compressed steel. 17in. diameter, and 40in. long the main bearings 19in. diameter in the body of the shaft, and swelled to 24in. diameter in the middle for the rope-pulley.'[6]

1891 Mr Matthews left the firm which presumably reverted to the previous title at a later date.