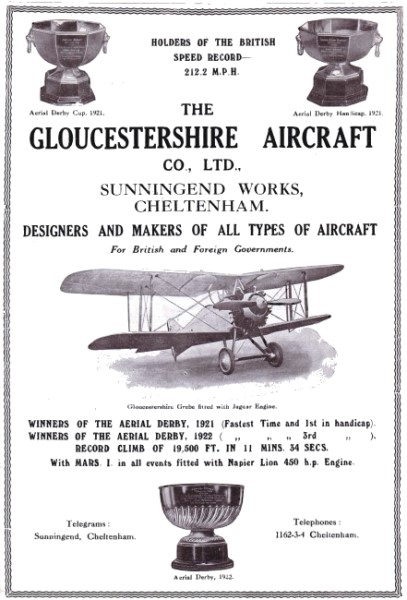 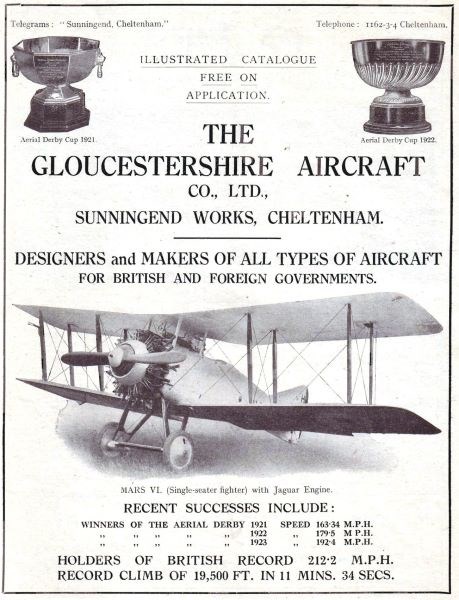 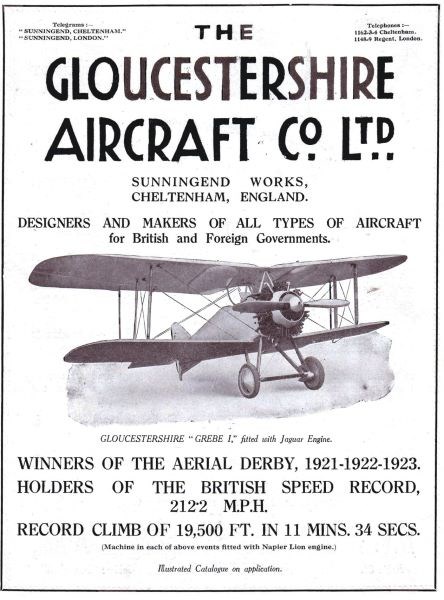 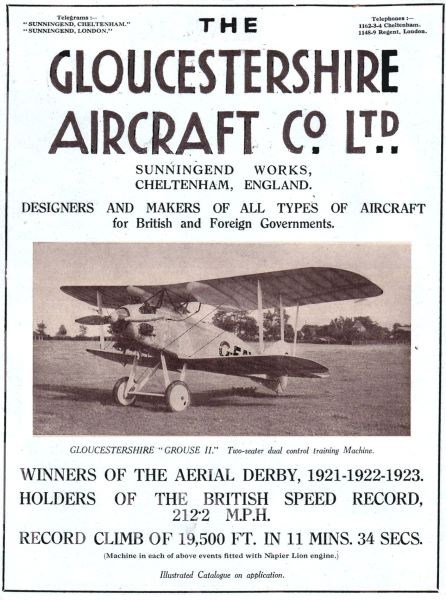 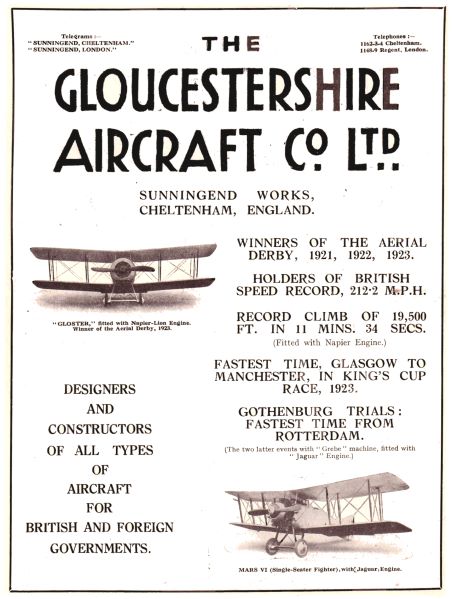 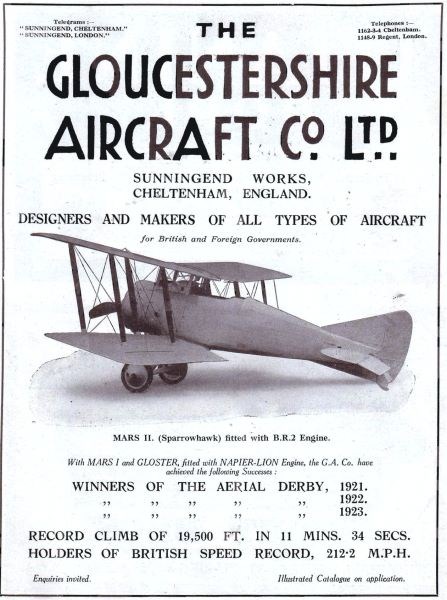 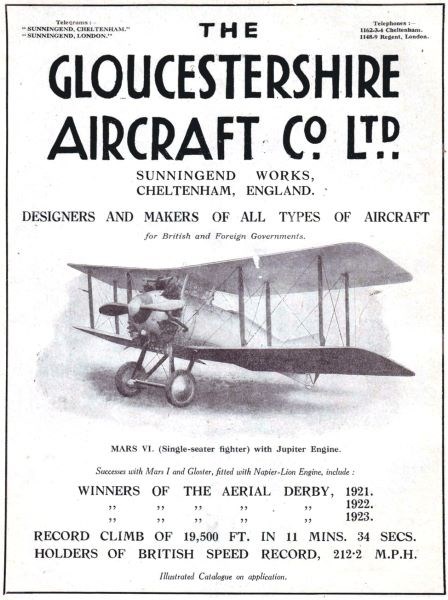 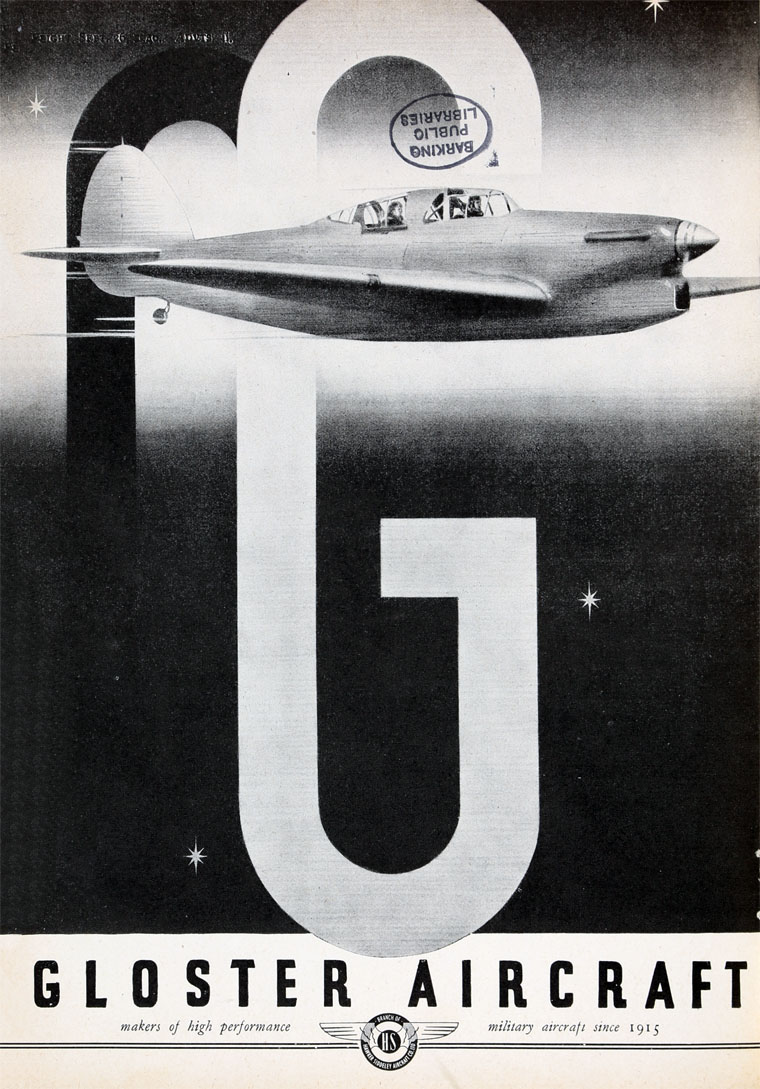 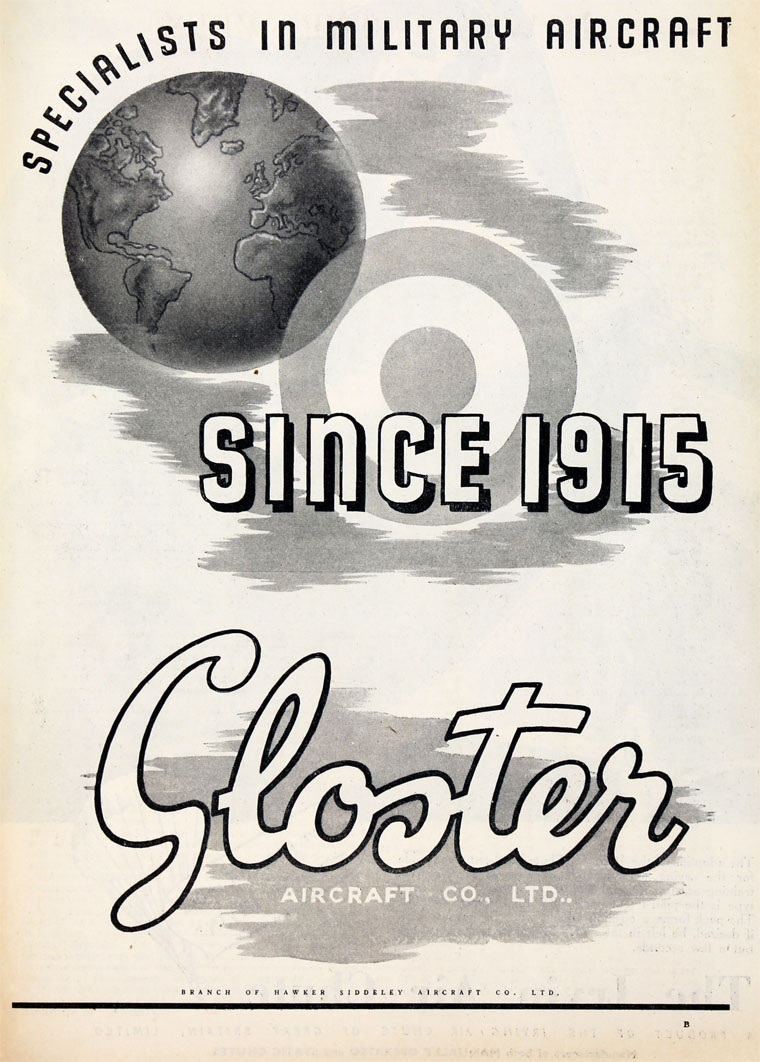 1945 publication of a photograph of the E28/39 jet-propelled aircraft. 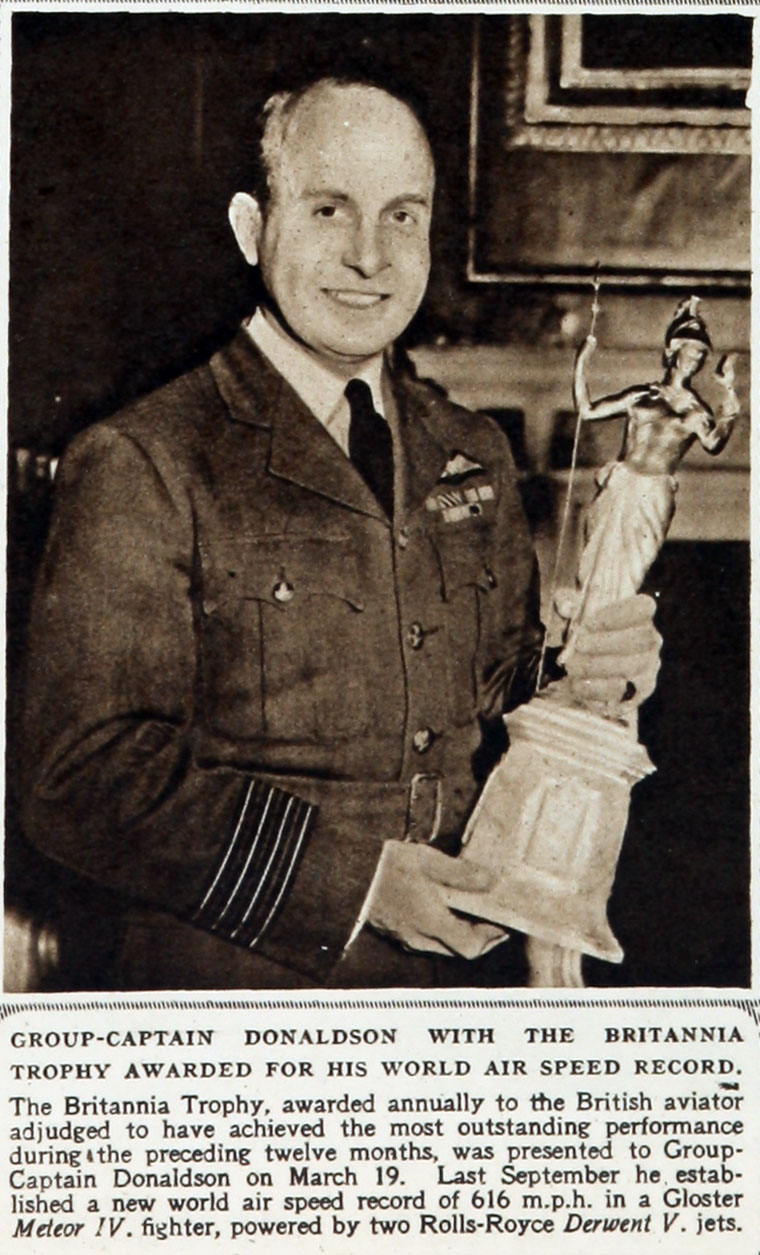 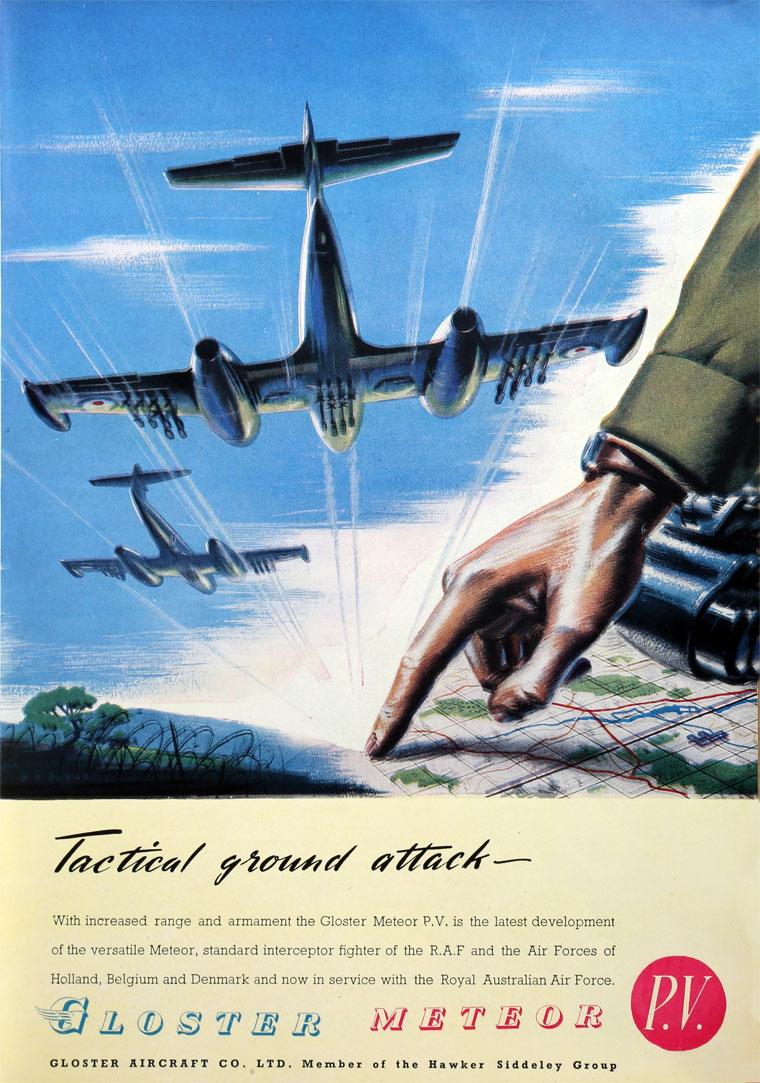 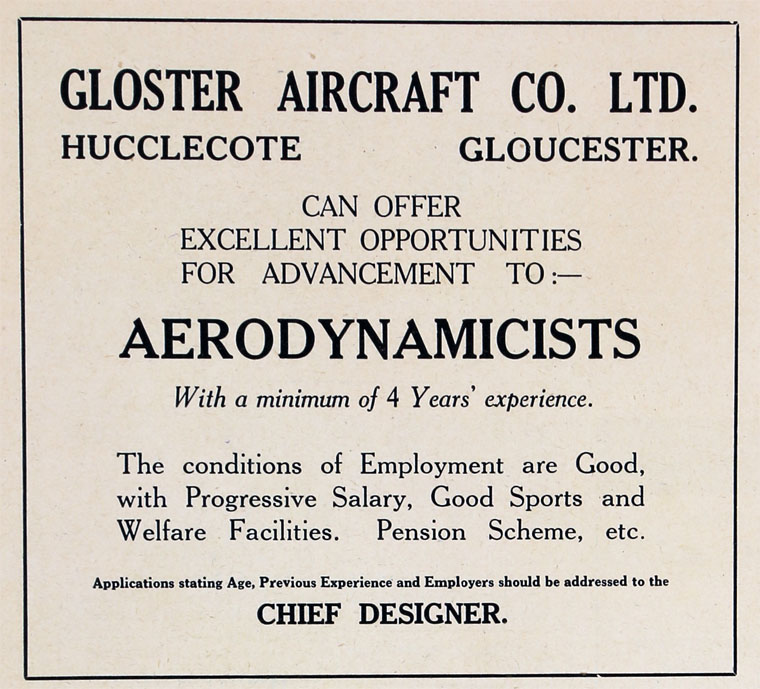 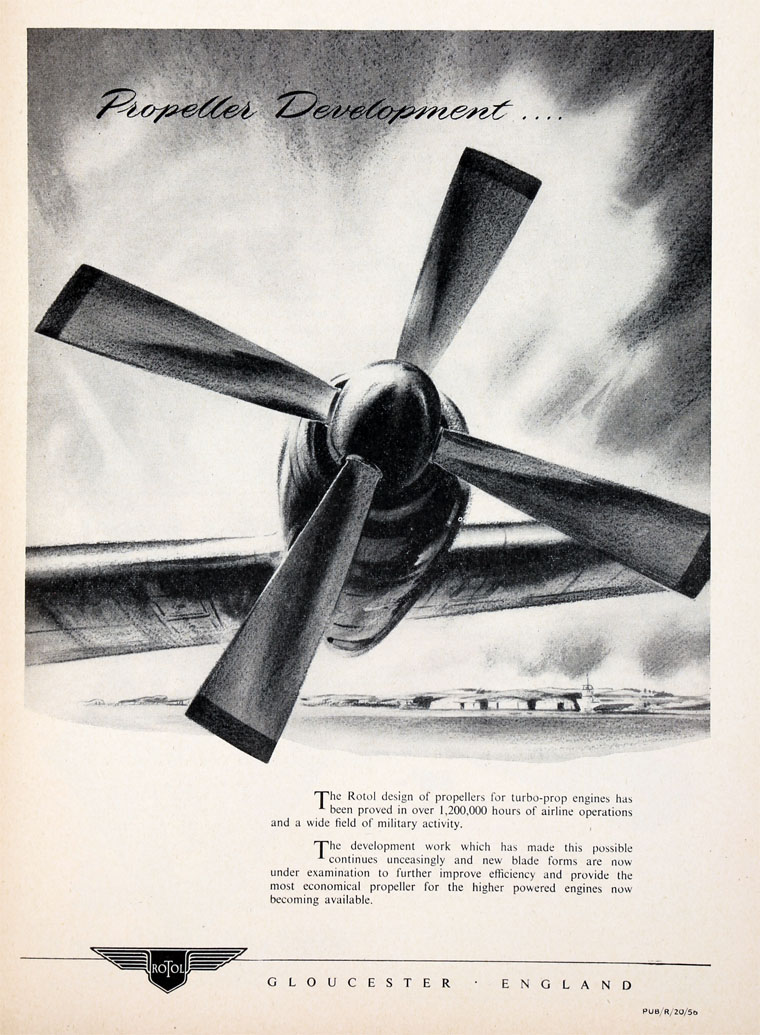 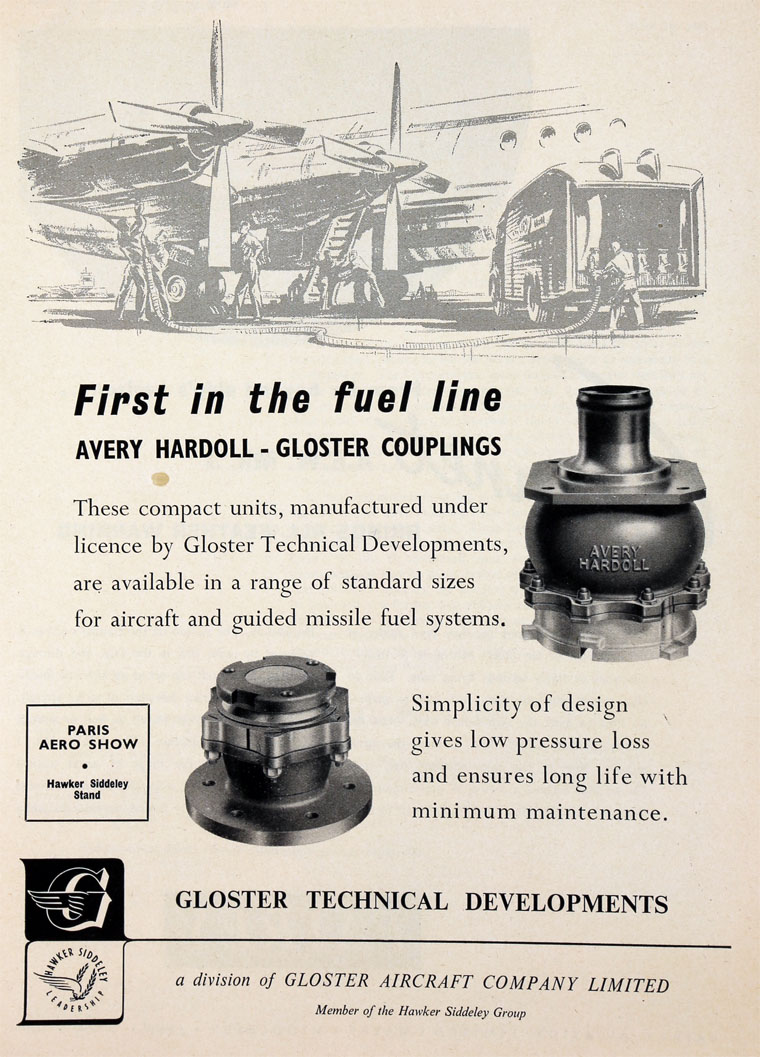 There is a separate entry showing the Gloster Aircraft Co Aircraft models.

The company produced a famous lineage of fighters for the Royal Air Force (RAF); the Grebe, Gladiator, Meteor and Javelin. It also produced the Hawker Hurricane and Typhoon for the parent company Hawker Siddeley. Gloster produced the first British gas turbine-powered aircraft: the E.28/39 and the first British (and only gas-turbine-powered Allied aircraft to see service in World War II) production jet fighter in the Meteor. Gloster's test runway became famous for the first flight of Sir Frank Whittle's turbojet in the E.28/39 aircraft.

1917 June. The Gloucestershire Aircraft Company was formed by A. W. Martyn and Hugh Burroughes of Airco. The company acquired the aircraft business previously carried out by H. H. Martyn, which held a 50% share, and the Aircraft Manufacturing Co (Airco) held the other 50%. The company rented what was the Sunningend works of H. H. Martyn in Cheltenham, Gloucestershire.

As orders for aircraft increased, other companies in the Gloucester and Cheltenham district were contracted with work. Where any flying was involved the aircraft were moved to an Air Board aircraft acceptance park at Hucclecote seven miles away by motor transport. Although Huccelcote aerodrome was used by the company it had no hangars until 1921 when it rented part of hangar from the Air Board.

1921 Hugh Burroughes and David Longden acquired the rights to the Nieuport Nighthawk fighter, together with the services of Nieuport's chief designer H. P. Folland.

1926 The name of the company was abbreviated to the Gloster Aircraft Company because customers outside of the United Kingdom found the original name too difficult to pronounce.

1928 With the move to metal construction the Sunningend factory was no longer suitable and the company bought the aerodrome at Hucclecote with all the hangars and office accommodation.

1934 Hawker Engineering purchased the Gloster Aircraft Co which had much greater potential for expansion in its manufacturing facilities at Hucclecote whilst Hawker's Kingston premises had no room for expansion[3]. The company continued to produce aircraft under its own name. In that same year the company produced the famous Gladiator biplane.

The Gladiator was a biplane fighter, used by the RAF and the Royal Navy's Fleet Air Arm (FAA) as the carrier-capable Sea Gladiator, as well as a number of other air forces, during World War II. The aircraft had a top speed of around 414 km/h. The Gladiator had an enclosed, single-seat cockpit, cantilever landing gear and a two-blade, fixed-pitch propeller driven by a Bristol Mercury air-cooled engine. A total of 756 airframes were built: 480 RAF, 60 FAA, 216 exported to 13 countries. Gladiators were sold to Belgium, China, Egypt, Finland, Free French, Greece, Iraq, Ireland, Latvia, Lithuania, Norway, Portugal, South Africa and Sweden.

Although serving valiantly in the first years of the Second World War, the Gloster Gladiator was sorely outclassed by contemporary monoplane fighters such as the Messerschmitt Bf-109, and destined to be the RAF's last biplane fighter.

Having no modern designs of its own in production, Gloster undertook manufacture for the parent company Hawker. In 1939, the company built 1,000 Hawker Hurricanes in the first 12 months of World War II and delivered its last of 2,750 Hurricanes in 1942. Production was then switched to the Hawker Typhoons for the Royal Air Force, 3,300 being built in total.

On 8 April 1941, the first test flight of the Gloster E.28/39 with a turbo-jet engine, invented by Sir Frank Whittle, took off from the company's airfield at Hucclecote. This formed the basis for the Gloster Meteor, the only jet to be used by the Allied Forces during World War II. Frank Whittle's memorial showing a full-scale model of the Gloster E28/39.

The Meteor was the first operational Allied jet fighter aircraft of World War II. First flying with the British Royal Air Force (RAF) in 1943, the Meteor commenced operations in mid-1944, only some weeks later than the world's first operational jet, the German Messerschmitt Me 262.

In 1945 a Meteor F Mk.4 prototype, stripped of armament, gained a World Speed Record of 606 mph with Group Captain H. Wilson at the controls. In early 1946, another F Mk.4 prototype was used to set a world air speed record of 616 mph (991 km/h) true airspeed with Group Captain "Teddy" Donaldson (see 1947 image) flying the highly modified Meteor, nicknamed "Yellow Peril." Meteors remained in service with several air forces for many years and saw action with the Royal Australian Air Force (RAAF) in the Korean War. Eventually, Gloster Meteors in fighter, trainer and night fighter versions were in operational use by 12 nations.

During Gloster's "heyday," in 1947, S/L Janusz Zurakowski was employed as an experimental pilot. In the following years, he became one of the world's most famous experimental and aerobatics pilots. He developed a new aerobatic manoeuvre, the "Zurabatic Cartwheel", which held the audience captivated as he suspended the Gloster Meteor G-7-1 prototype he was flying, in a vertical cartwheel at the 1951 Farnborough Air Show, a manoeuvre the announcer declared to be "Impossible!" Serving for a brief period as the chief test pilot, he tested the many experimental versions of the Gloster Meteor, Javelin and E.1/44 fighters. During the Gloster years, "Zura" as he came to be known, set an international speed record: London-Copenhagen-London, 4-5 April, 1950.

In 1952, the two seat, delta winged Gloster Javelin was developed as an all weather fighter that could fly above 50,000 feet at almost the speed of sound. This modern aircraft proved to be too heavy to take off from the short airfield in Hucclecote, and was instead fitted out to the bare minimum and given a very small fuel load. It was then flown in a short hop to RAF Moreton Valence three miles to the south, where the aircraft would be completed. It was this shortcoming of the facilities, along with the rationalisation of the British aircraft industry, that would lead to the demise of Gloster.

In 1961, the company was merged with Armstrong Whitworth to form Whitworth Gloster Aircraft. Following another re-organisation, the firm became part of the Avro Whitworth Division of Hawker Siddeley Aviation in 1963, and the name Gloster disappeared as Hawker Siddeley rebranded its product line under its own name.

The site at Hucclecote was sold in 1964. The runway, while still visible from the air, has been partially obstructed by buildings on what is now the Gloucester Trading Estate. Many of the firms based on the estate are housed in former hangars.