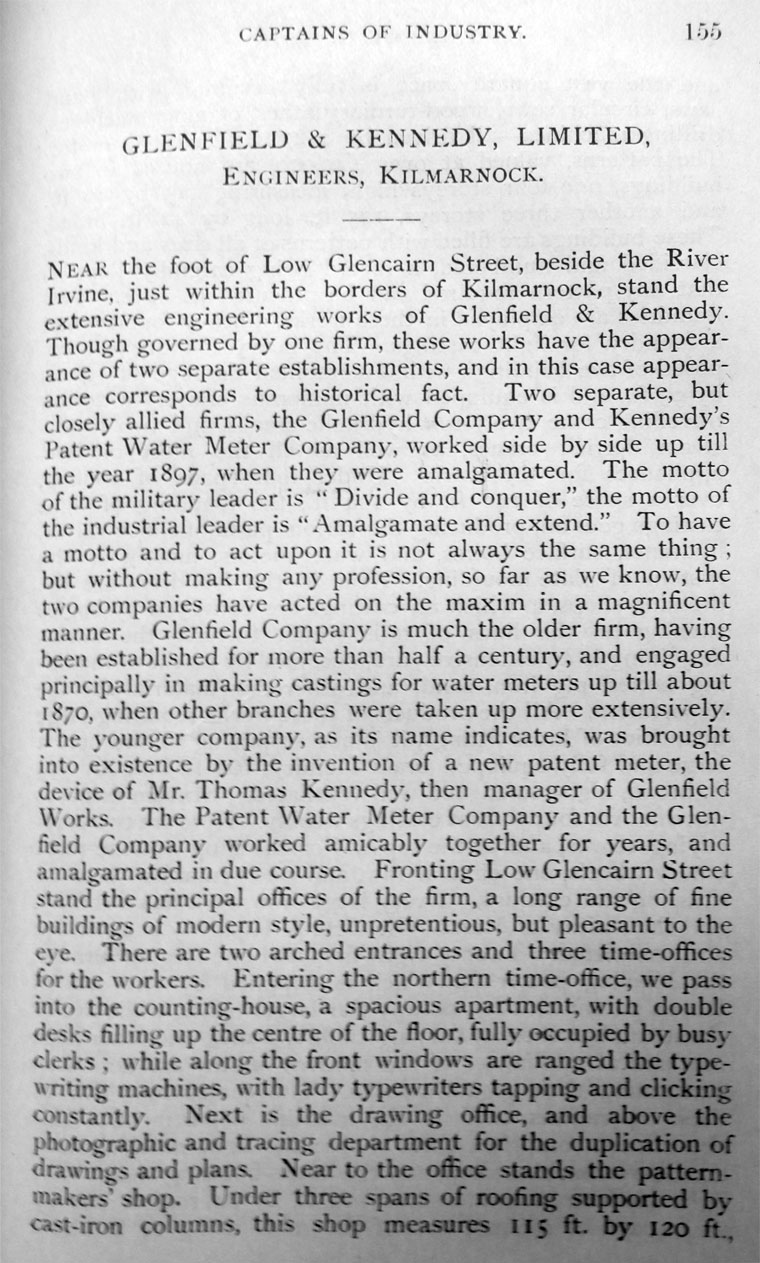 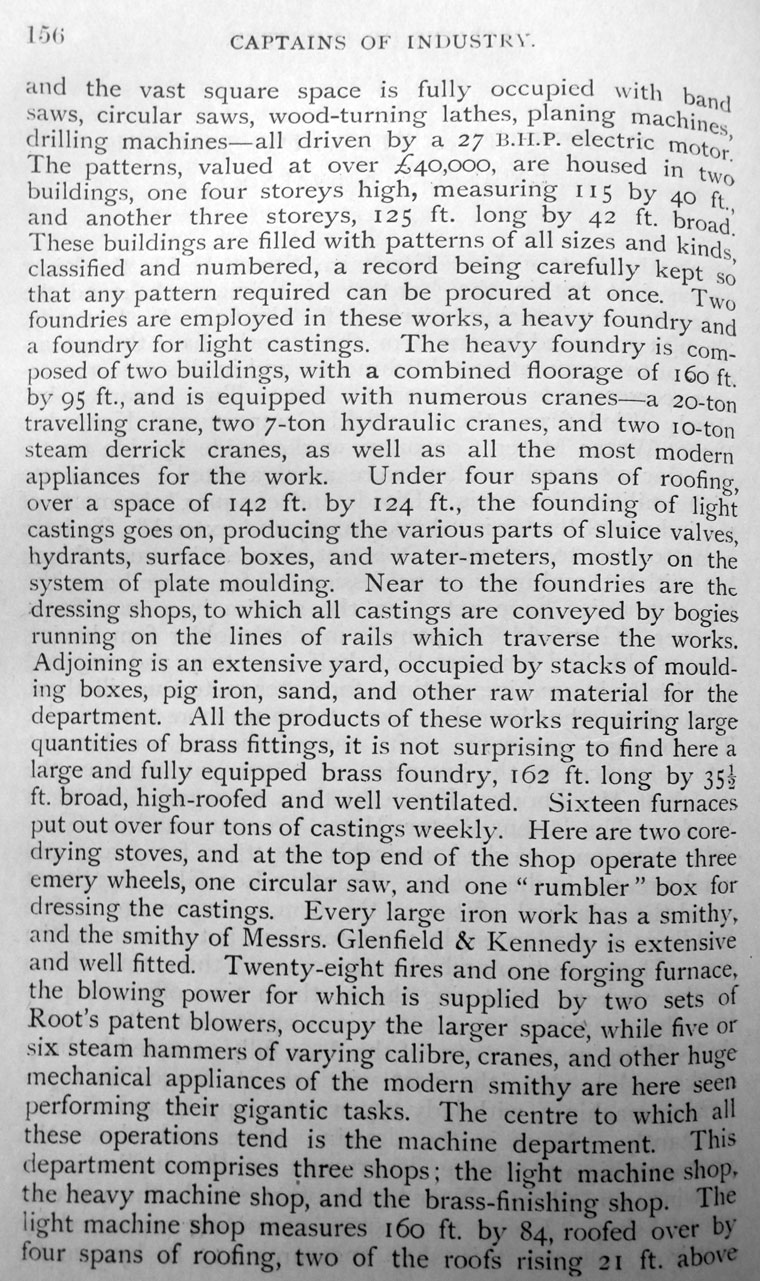 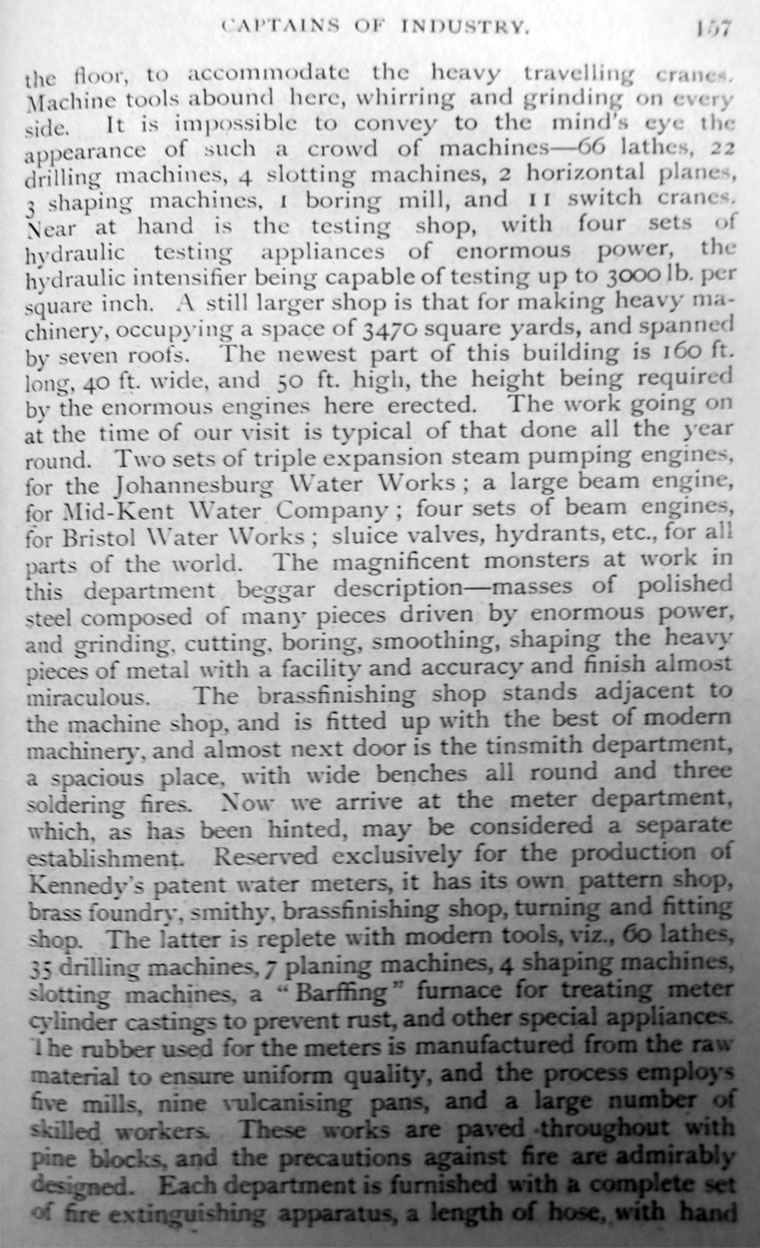 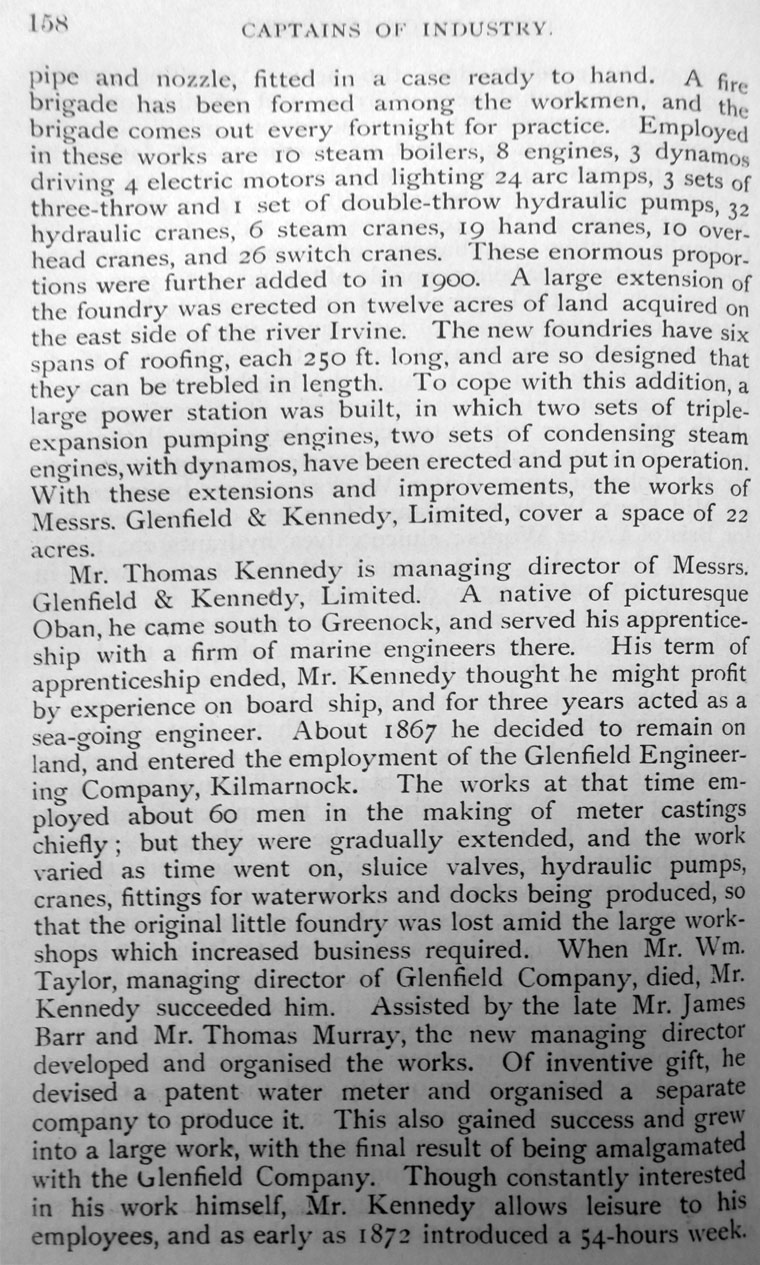 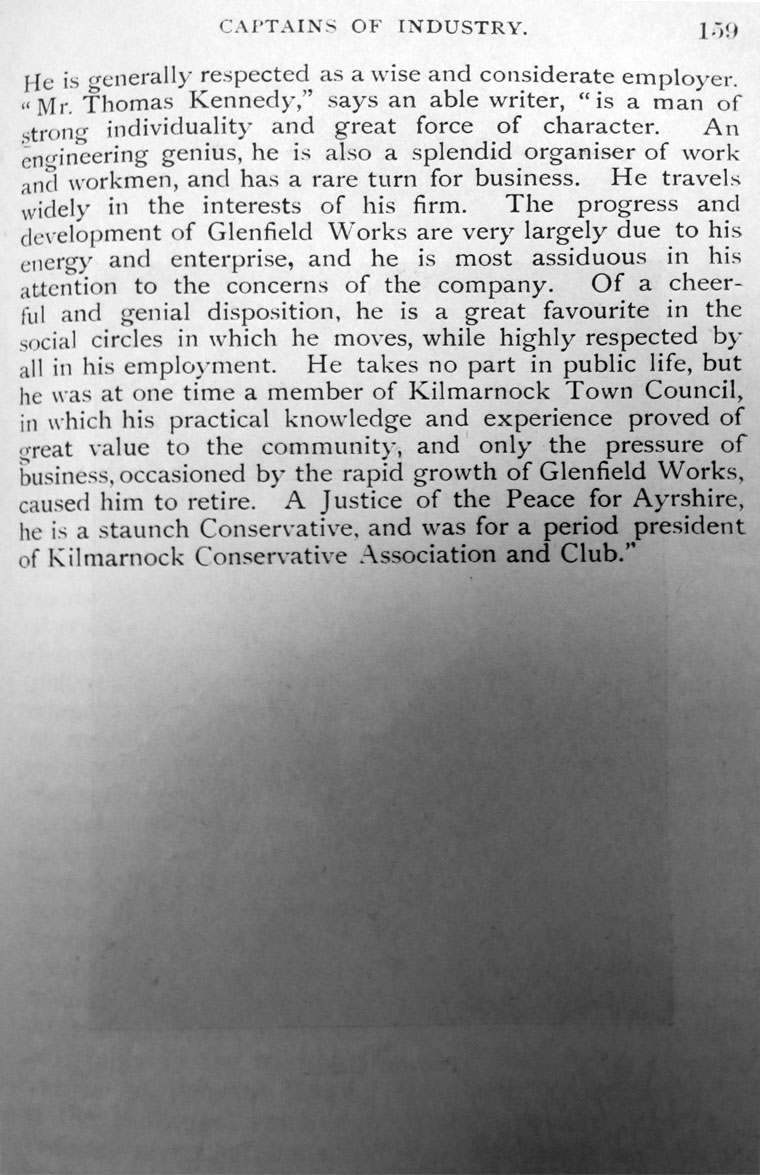 Note: This is a sub-section of Glenfield and Kennedy

NEAR the foot of Low Glencairn Street, beside the River Irvine, just within the borders of Kilmarnock, stand the extensive engineering works of Glenfield & Kennedy. Though governed by one firm, these works have the appearance of two separate establishments, and in this case appearance corresponds to historical fact. Two separate, but closely allied firms, the Glenfield Company and Kennedy's Patent Water Meter Company, worked side by side up till the year 1897, when they were amalgamated. The motto of the military leader is "Divide and conquer," the motto of the industrial leader is "Amalgamate and extend." To have a motto and to act upon it is not always the same thing; but without making any profession, so far as we know, the two companies have acted on the maxim in a magnificent manner.

Glenfield Company is much the older firm, having been established for more than half a century, and engaged principally in making castings for water meters up till about 1870, when other branches were taken up more extensively. The younger company, as its name indicates, was brought into existence by the invention of a new patent meter, the device of Mr. Thomas Kennedy, then manager of Glenfield Works, The Patent Water Meter Company and the Glenfield Company worked amicably together for years, and amalgamated in due course.

Fronting Low Glencairn Street stand the principal offices of the firm, a long range of fine buildings of modern style, unpretentious, but pleasant to the eye. There are two arched entrances and three time-offices for the workers. Entering the northern time-office, we pass into the counting-house, a spacious apartment, with double desks filling up the centre of the floor, fully occupied by busy clerks while along the front windows are ranged the typewriting machines, with lady typewriters tapping and clicking constantly. Next is the drawing office, and above the photographic and tracing department for the duplication of drawings and plan. Near to the office stands the pattern-makers' shop. Under three spans of roofing supported by cast-iron columns, this shop measures 115 ft. by 120 ft., and the vast square space is fully occupied with hand saws, circular saws, wood-turning lathes, planing machines drilling machines — all driven by a 27 B.H.P. electric motor. The patterns, valued at over £40,000, are housed in two buildings, one four storeys high, measuring 115 by 40 ft. and another three storeys, 125 ft. long by 42 ft. broad. These buildings are filled with patterns of all sizes and kinds, classified and numbered, a record being carefully kept so that any pattern required can be procured at once.

Two foundries are employed in these works, a heavy foundry and a foundry for light castings. The heavy foundry is composed of two buildings, with a combined floorage of 160 ft. by 95 ft., and is equipped with numerous cranes — a 20-ton travelling crane, two 7-ton hydraulic cranes, and two 10-ton steam derrick cranes, as well as all the most modern appliances for the work. Under four spans of roofing, over a space of 142 ft. by 124 ft., the founding of light castings goes on, producing the various parts of sluice valves, hydrants, surface boxes, and water-meters, mostly on the system of plate moulding.

Near to the foundries are the dressing shops, to which all castings are conveyed by bogies running on the lines of rails which traverse the works. Adjoining is an extensive yard, occupied by stacks of moulding boxes, pig iron, sand, and other raw material for the department. All the products of these works requiring large quantities of brass fittings, it is not surprising to find here a large and fully equipped brass foundry, 162 ft. long by ft. broad, high-roofed and well ventilated. Sixteen furnaces put out over four tons of castings weekly. Here are two core-drying stoves, and at the top end of the shop operate three emery wheels, one circular saw, and one "rumbler" box for dressing the castings.

Every large iron work has a smithy, and the smithy of Messrs. Glenfield & Kennedy is extensive and well fitted. Twenty-eight fires and one forging furnace, the blowing power for which is supplied by two sets of Root's patent blowers, occupy the larger space, while five or six strain hammers of varying calibre, cranes, and other huge mechanical appliances of the modern smithy are here seen performing their gigantic tasks.

The centre to which all these operations tend is the machine department. This department comprises three shops; the light machine shop, the heavy machine shop, and the brass-finishing shop. The light machine shop measures 160 ft. by 84, roofed over by four spans of roofing, two of the roofs rising 21 ft. above the floor, to accommodate the heavy travelling cranes. Machine tools abound here, whirring and grinding on every side. It is impossible to convey to the mind's eye the appearance of such a crowd of machines - 66 lathes, 22 drilling machines, 4 slotting machines, 2 horizontal plane, shaping machines, 1 boring mill, and 11 switch cranes. Near at hand is the testing shop, with four sets of hydraulic testing appliances of enormous power, the hydraulic intensifier being capable of testing up to 3000 lb. per square inch.

A still larger shop is that for making heavy machinery, occupying a space of 3470 square yards, and spanned by seven roofs. The newest part of this building is 160 ft. long. 40 ft. wide, and 30 ft. high, the height being required by the enormous engines here erected. The work going on at the time of our visit is typical of that done all the year round. Two sets of triple expansion steam pumping engines, for the Johannesburg Water Works; a large beam engine, for Mid-Kent Water Company; four sets of beam engines, for Bristol Water Works; sluice valves, hydrants, etc., for all parts of the world. The magnificent monsters at work in this department beggar description — masses of polished steel composed of many pieces driven by enormous power, and grinding, cutting, boring, smoothing, shaping the heavy piece; of metal with a facility and accuracy and finish almost miraculous.

The brass-finishing shop stands adjacent to the machine shop, and is fitted up with the best of modern machinery, and almost next door is the tinsmith department, a spacious place with wide benches all round and three soldering fires.

Now we arrive at the meter department, which, as has been hinted, may be considered a separate establishment. Reserved exclusively for the production of Kennedy's patent water meters, it has its own pattern shop, brass foundry, smithy, brass-finishing shop, turning and fitting shop. The latter is replete with modern tools, viz., 60 lathes, 35 drilling machines, 7 planing machines, 4 shaping machines, slotting machines a ‘Barffing’ furnace for treating meter cylinder castings to prevent rust, and other special appliances.

The rubber used for the meters is manufactured from the raw material to ensure uniform quality, and the process employs five mills, nine vulcanising pans, and a large number of skilled workers. These works are paved throughout with pine blocks, and the precautions against fire are admirably designed. Each department is furnished with a complete set of fire extinguishing apparatus, a length of hose, with hand pipe and nozzle, fitted in a case ready to hand. A fire brigade has been formed among the workmen, and the brigade comes out every fortnight for practice.

Employed in these works are 10 steam boilers, 8 engines, 3 dynamos driving 4 electric motors and lighting 24 arc lamps, 3 sets of three-throw and 1 set of double-throw hydraulic pumps, 32 hydraulic cranes, 6 steam cranes, 19 hand cranes, to overhead cranes, and 26 switch cranes. These enormous proportions were further added to in 1900. A large extension of the foundry was erected on twelve acres of land acquired on the east side of the river Irvine. The new foundries have six spans of roofing, each 250 ft. long, and are so designed that they can be trebled in length. To cope with this addition, a large power station was built, in which two sets of triple-expansion pumping engines, two sets of condensing steam engines, with dynamos, have been erected and put in operation. With these extensions and improvements, the works of Messrs. Glenfield & Kennedy, Limited, cover a space of 22 acres.

Mr. Thomas Kennedy is managing director of Messrs. Glenfield & Kennedy, Limited. A native of picturesque Oban, he came south to Greenock, and served his apprenticeship with a firm of marine engineers there. His term of apprenticeship ended, Mr. Kennedy, thought he might profit by experience on board ship, and for three years acted as a sea-going engineer.

About 1867 he decided to remain on land, and entered the employment of the Glenfield Engineering Company, Kilmarnock. The works at that time employed about 60 men in the making of meter castings chiefly; but they were gradually extended, and the work varied as time went on, sluice valves, hydraulic pumps, cranes, fittings for waterworks and docks being produced, so that the original little foundry was lost amid the large workshops which increased business required. When Mr. Wm. Taylor, managing director of Glenfield Company, died, Mr. Kennedy succeeded him. Assisted by the late Mr. James Barr and Mr. Thomas Murray, the new managing director developed and organised the works. Of inventive gift, he devised a patent water meter and organised a separate company to produce it. This also gained success and grew into a large work, with the final result of being amalgamated with the Glenfield Company. Though constantly interested in his work himself, Mr. Kennedy allows leisure to his employees, and as early as 1872 introduced a 54-hours week.

He is generally respected as a wise and considerate employer. "Mr. Thomas Kennedy," says an able writer, "is a man of strong individuality and great force of character. An engineering genius, he is also a splendid organiser of work and workmen, and has a rare turn for business. He travels widely in the interests of his firm. The progress and development of Glenfield Works are very largely due to his energy and enterprise, and he is most assiduous in his attention to the concerns of the company. Of a cheerful and genial disposition, he is a great favourite in the social circles in which he moves, while highly respected by all in his employment. He takes no part in public life, but he was at one time a member of Kilmarnock Town Council, in which his practical knowledge and experience proved of real value to the community, and only the pressure of business, occasioned by the rapid growth of Glenfield Works, caused him to retire. A Justice of the Peace for Ayrshire, he is a staunch Conservative, and was for a period president of Kilmarnock Conservative Association and Club."