1. Abutment of aqueduct, east side of River Brue near Glastonbury (see notes) 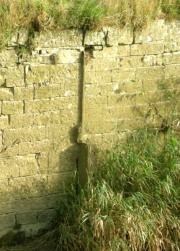 3. South Drain Aqueduct. The bed of nettles mark the trough of the aqueduct. There appears to be a wooden lintel at water level

Between Highbridge and Glastonbury, Somerset.

The route was across low-lying wetland. Just two locks were used, one at Shapwick with just a 3 ft rise, and a sea lock with three gates at Highbridge. The sea lock had to accommodate the large tidal range of the Severn Estuary.

The moors traversed by the canal were prone to flooding. Two aqueducts were required, to cross the River Brue and the South Drain.

Shortly after the Act for the canal received assent in 1827, it was realised that the intended plan was impracticable, and the company consulted John Rennie, who proposed options for three different sizes of canal. The 'medium sized' option was selected, 44 ft wide with locks 18 ft wide and 64 ft long.[1]

1830 ' Glastonbury Canal - We have great pleasure in announcing that the foundation stone of the Iron Aqueduct, conducting this Canal across the river Brue, about a mile below the town of Glastonbury, was laid on Wednesday last, by the Mayor, Thomas Maddison, esq; amidst the cheers and acclamations of a large assemblage of neighbouring population. The work will be completed in the course of a fortnight, and we may congratulate not only the town of Glastonbury, and the towns and villages in its immediate vicinity, on the advantageous prospects which this undertaking holds out to them, but we may go farther and anticipate its extension, either by rail road or boat canal, to the neighbourhood of Sherborne and Yeovil, across the county of Dorset, to Dorchester, Poole, and Weymouth. Indeed it appears that such an extension is not only probable, but that it must take place whenever this undertaking is completed, and a trade commenced; this will be in the autumn of next year. The expense of the undertaking falls some thousands short of the original very low estimate of £18,000— Dorset County Chronicle.' [2]

Opened in 1833 and closed in 1854. The hope was that it would both revive the trade of the town and help to drain the Levels. Though it appeared successful in the early years, the canal became obstructed by the rising peat bed. The company was bought out by the Bristol and Exeter Railway by 1848, who resold it to the Somerset Central Railway in 1852. In 1854, following closure the river crossing and wharf area were dismantled.[3]

For more information, see Wikipedia entry. Note that the Wikipedia photograph of a bridge over Cripps River was taken in 2006, and the bridge has since been replaced.

The aqueduct, near Glastonbury, was described as having three arches, the river passing under via a syphon [4]. The aqueduct has long gone, but the stone abutments remain, together with remnants of ironwork (cast iron plates embedded in the masonry). The distance between the iron sides is nearly 23 ft. This is about 5 ft wider than the locks, so perhaps a towpath was cantilevered over the aqueduct.

This took the canal over the South Drain at Ashcott Corner, and was described as a single-arched syphon aqueduct. The masonry remains of the east abutment can still be seen. The width between the walls is 18.5 ft. Location: immediately south of the former railway bridge on the track leading from Station Road, Ashcott, to Ham Wall Nature Reserve.

The location of Shapwick Lock is adjacent to a former iron railway bridge crossing a short dog leg in the South Drain. In 1996 it was recorded that masonry remains of the lock could be seen, but nothing is visible now (2014).

There are no visible remains of the canal or the sea lock at Highbridge. A blue sign on a brick wall records the site of the bridge which crossed the lock. From this location, the line of the canal to the River Brue can be imagined, but the canal was filled in and covered by houses and roads in recent times.