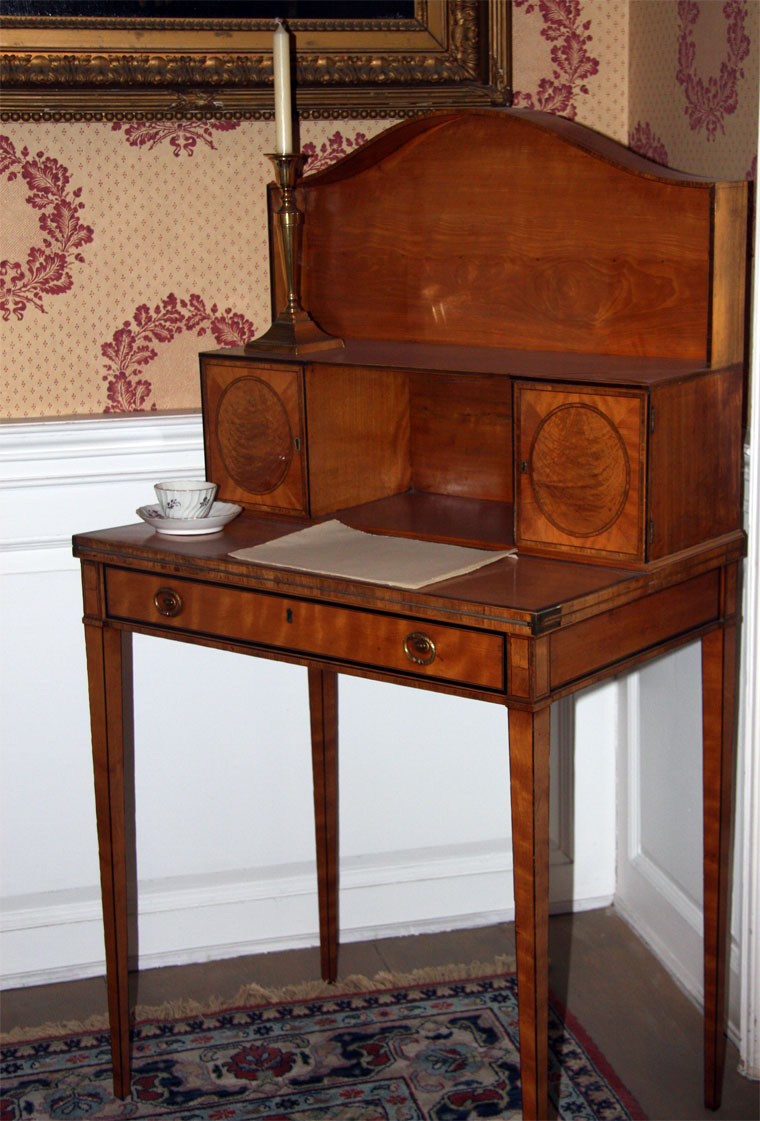 of London, Liverpool, Manchester and Lancaster

1727/8 He became a Freeman of Lancaster and went into partnership as a cabinet-maker in 1728 with another Catholic, George Haresnape.

1730 Robert Gillow opened his own cabinet making business, located in Castle Hill, Lancaster; he began to exploit the lucrative West Indies trade, exporting mahogany furniture and importing rum and sugar. He was one of the first cabinet-makers to work with exotic woods, used as ballast for the ships. He also developed links with the Baltic ports which supplied him with oak and other European woods.

Robert Gillow had several sons. He was well aware of the need for a successful cabinetmaker to be schooled in all aspects of furnishing and interior design, so he sent his son Richard to study architecture in London until 1757. Two of his sons, Richard (1734-1811) and Robert II (1745-1793), joined their father in business. At this time the firm were architects as well as cabinet makers. Richard designed the Lancaster Custom House on Lancaster Quay, which is currently the Maritime Museum.

1764 a London branch of Gillows was established at 176 Oxford Road, now Oxford Street. The firm rapidly established a reputation for supplying high quality furniture to the richest families in the country.

Robert II worked with his father for a short time before moving to London in 1769. He was in sole charge of the London operation until the eldest of Richard's three sons was of an age to join him six years later (Robert II's children were all girls). The twin aims of this venture were to keep up with fashions in the capital and to create a London market for goods from Lancaster.

1772 Robert died; the business was continued by his two sons, Richard and Robert.

1811 Advert: 'To be Sold by Private Contract, a most beautiful Gentleman's turning LATHE (made by Gillow of Lancaster) with an oval movement, and the different implements and tools necessary for turning Wood and Metal, the above are very compleat and in good condition .... For particulars and a view of the above enquire at No 16 Black friars.'[1]

1881 Gillows moved from Castle Hill in Lancaster to North Road and developed a factory in the St Leonardgate area of Lancaster.

Note: For a detailed history of the company with examples of furniture see Gillows of Lancaster & Waring & Gillows Furniture

'To be Sold by Private Contract,
A most beautiful Gentleman's turning LATHE (made by Gillow of Lancaster) with an oval movement, and the different implements necessary for turning Wood and Metal, the above are very compleat and in good condition. Also, a Dressing machine .... For particulars and a view of the above enquire No 16 Black friars'. (Manchester)[2]