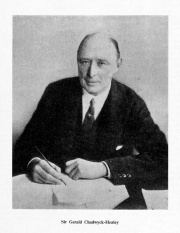 IT is with a very deep and personal regret that we have to record the death on Wednesday of last week of Sir Gerald Chadwyck-Healey, Bt., C.B.E., at the age of eighty-one.

Sir Gerald was the grandson of Mr. Edward Charles Healey, who founded THE ENGINEER in 1856. He came to THE ENGINEER in 1895 and was appointed a director in 1905. Thereafter, to the end of his life, the fortunes of this journal lay very close to his heart. He came to the journal at a particularly interesting time. Partly as one of the consequences of the invention of the typewriter, partly for social and other reasons, the organisation of office procedure was changing. At the same time the competition of other technical journals was demanding improved standards editorially.

Sir Gerald found in the office, when he first came there, a young man of about his own age, Loughnan St. Lawrence Pendred, son of the reigning editor. In 1905, the year in which Sir Gerald became a director of the company, Lough Pendred succeeded his father as Editor. Before and after these events the two men, each in his own sphere, worked together to modernise office procedure and the presentation of editorial material. In the process, Sir Gerald conceived not only a respect, but a lively affection for his Editor, an affection that was very much reciprocated.

In 1919 Sir Gerald succeeded his father, the late Sir Charles Chadwyck-Healey, as chairman of the company, and when, in 1929, "The Engineer, Ltd.," amalgamated with the Morgan concern, proprietors of The Ironmonger and The Chemist and Druggist to form Morgan Brothers (Publishers), Ltd., he became chairman of the new company. After the amalgamation, as befitted a chairman, he took a great interest in those other journals. But always-and inevitably - considering his family's connection with it - THE ENGINEER remained the journal upon which his deepest care was bestowed.

So that when, in 1945, the time came for Lough Pendred to retire from the editorial chair, the support Sir Gerald bad always given to him was transferred unabated to his successor, not, the present Editor hopes, without some of the affection, too.

In 1948, his chairmanship of the company came to an end, when he was succeeded by his brother, Mr. Oliver Chadwyck-Healey, the present chairman. But he remained a director for three more years before retiring in 1951.

But if the prime purpose of Sir Gerald's life was to watch over the fortunes of THE ENGINEER he had, besides, many other activities. When war broke out in 1914 he served with the Royal Naval Volunteer Reserve and later became, first, assistant to the Controller of the Navy, and, later, Director of Materials and Priority. For his services during the war he was made a C.B.E. and he was also appointed to the order of the Crown of Italy in the rank of Commander.

From 1922 onwards be was a member of the Royal Commission on Awards to Inventors, which, after the first world war, just like a similar body at the present time, struggled to discover who really were the inventors of the many new devices used in that war, and to assess their value. In those post-war years, too, he took an active part industrially. From a time several years before the outbreak of the first world war he had acted unofficially in an advisory capacity to the late Sir R. B. Phillpotts, chairman of the small British Tabulating Machine Company, Ltd., which was destined so much to expand its output. In 1914, he was elected to its board and in 1934 be became vice-chairman. By that time the concern had become much larger and in 1935 ·Sir Gerald went to South Africa to meet the directors of the associated South African company, Hollerith Machines (South Sir Gerald Chadwyck-Healey Africa) (Proprietary), Ltd. He retired from the company's service in 1951, by which time it had a very large factory in Belfast, in addition to its earlier works at Letchworth.

He was also for many years chairman of A. G. Mumford, Ltd., a firm once famed for the manufacture of steam engines and reciprocating pumps, particularly for marine use; feed water regulators and other devices. That firm was founded by Mr. A. G. Mumford in 1876, became a private company in 1906, and was converted into a public company in 1920. Sir Gerald, wl10 had become acquainted with Mr. Mumford through his work at the Admiralty, became chairman in that year. Subsequently, in the difficult years of the early 'thirties, when orders were hard to come by, the decision was taken to wind up the company. In 1932, accordingly, it came to an end and G. and J. Weir, Ltd., of Glasgow, acquired all the existing patent rights of the company.

For many years Sir Gerald lived at Cranleigh, in Surrey. There he became first a director in 1920 and in 1925 chairman of the Cranleigh Water Company, Ltd. 'At that time this company was a very small concern. But Sir Gerald was instrumental in negotiating its amalgamation with the Chiddingfold and District Water Company, Ltd. He remained chairman of the joint company, which expanded to serve eight parishes, until 1948, and was still a director when the company was absorbed by the Guildford, Godalming and District Water Board in 1952.

These and other activities brought Sir Gerald a wide acquaintance industrially, an acquaintance of particular value to this journal at a time when publicity services were less well developed than they have since become and personal acquaintance could do much to open access to sources of information that might otherwise have remained closed. But whatever the calls his other activities might make upon him it was always felt in this office that nothing else was ever quite so important in his life as the maintenance not merely of the prosperity of THE ENGINEER, but, more significantly, its repute as an engineering journal serving a great industry.

Sir Gerald had that remarkable quality, of particular value to those called upon to lead other men, of always seeming to be at hand when most the steadying factor in leadership is needed. He knew, too, the value merely of being present at times of stress even if there was little that he personally could do about it. Late in the second world war, for example, at a time when he was already past seventy years of age, one of Hitler's " V " weapons, late one night, shattered windows in this office and blew down internal partitions, scattered papers and did other damage. It was typical of Sir Gerald that next morning he was to be seen in his shirt sleeves giving encouragement to those cleaning up the mess. Sir Gerald always took a lively interest in the happiness and contentment of those who worked for Morgan Brothers, and, perhaps more particularly, for those who were concerned in editing and publishing THE ENGINEER. Throughout his chairmanship he had always liked, upon occasion, to wander around the office spending a few minutes talking to members of the staff, learning what was going on. After his retirement these visits became, perforce, less frequent. Alas, we can expect them no more ! Now, as those proud to be serving a journal that his grandfather founded and in whose future he took so very great an interest, we can pay only this tribute to his memory.

Sir Gerald is succeeded by the elder of his two sons, Mr. Edward Randal Chadwyck-Healey, M.C.

A short service was held at Holy Trinity Church, Ayr, on Friday of last week, and the funeral of the ashes took place yesterday, at St. Nicholas Church, Cranleigh, Surrey, of which living Sir Gerald had been patron for many years.