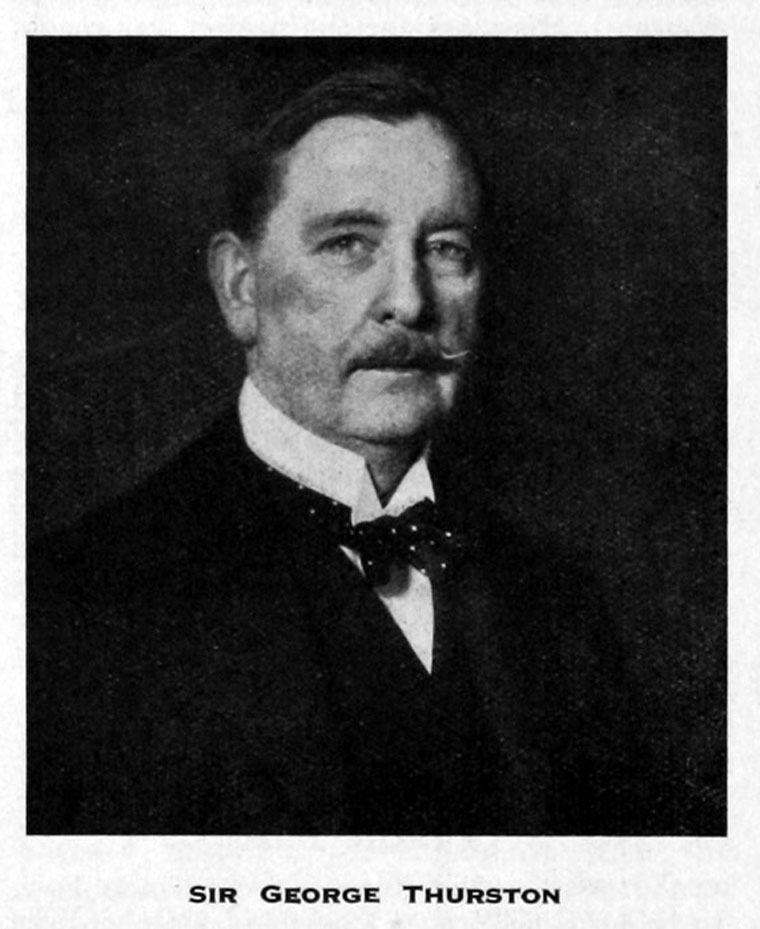 1915 Name change. 'I, THOMAS GEORGE OWENS THURSTON, heretofore called and known by the name of Thomas George Owens, of 34, St. George's-square, South Belgravia, in the county of London, Naval Architect, hereby give notice that, by a deed poll dated the 12th day of April, 1915, duly executed, attested, and enrolled this day, I wholly and absolutely renounced and relinquished the said surname of Owens, but retained the same as a Christian name, and declared that I had assumed and adopted, and, determined thenceforth, upon all occasions whatsoever, to use and subscribe the surname of Thurston instead of Owens. Dated this 12th day of April, 1915. THOMAS GEORGE OWENS THURSTON.'[2]

He changed his name by deed poll in 1915 to Thomas George Owens Thurston prior to attaining his knighthood. Although he took Owens as his third Christian name, his descendents conjoined his original and new surnames to take the family name of Owens-Thurston.

Trained in naval architecture in Liverpool and Newcastle-on-Tyne and worked on mercantile shipbuilding. He later worked under Philip Watts at Elswick shipyard. He became the chief naval architect for Vickers, Limited from around the turn of the 20th century up to the early 1920s. Later he became the firm's naval director. He contributed to the designs of the Imperial Japanese Navy battlecruiser Kongō and the dreadnought battleship Erin. During the First World War he was responsible for the large and diverse volume of construction in the Vickers yard.

1950 Died in Lampeter, Ceredigion, Wales, and buried there

As briefly recorded in our last issue, the death took place, on Sunday, January 22nd, at Arthlington, Torquay, of Sir George Thurston, who was for thirty years chief naval designer and later naval director of the successive firms of Vickers, Sons and Maxim, Ltd., Vickers Ltd., and Vickers-Armstrongs, Ltd. Sir George, who died at the age of eighty, will long be remembered as one of the outstanding naval architects of his time.

He was born in 1869 and on completing his early education in Liverpool, was apprenticed at the age of fourteen to the Castle Street Steel and Ironworks, of Milford Haven. He served the usual seven years' apprenticeship of those days and gained a full knowledge of drawing-office and mould loft and general shipyard practice. He also studied naval architecture theoretically and was the holder, at an early age, of the South Kensington Honours Certificate in Naval Architecture.

On finishing his training he spent some time, from about 1889 to 1898, with Sir W. G. Armstrong, Whitworth and Co., on the Tyne, where he was employed in the naval drawing-office and on design work.

It was early in 1898 that he accepted the appointment as naval architect to Vickers, Sons and Maxim, Ltd., a firm which was then at 28, Victoria Street, Westminster, and had its naval construction yard at Barrow-in-Furness. For many years he was actively associated with all the designs for war vessels built under Admiralty contracts and the many and varied naval ships which were constructed at Barrow for foreign Governments. On the Admiralty contracts Sir George collaborated closely with the late Sir Philip Watts and later with Sir Eustace Tennyson d'Eyncourt, in their capacities as Directors of Naval Construction at the Admiralty.

Three interesting ships designed by Sir George were the monitors "Javary," "Solimoes" and "Madeira," which were completing at Vickers' Barrow shipyard for the Brazilian Government in 1914. They were taken over by the Admiralty, and as the "Severn," "Mersey" and "Humber" they took part in several coastal bombardments and other operations entailing long voyages during the 1914-1918 war. They were ships of 1260 tons with a length of 265ft and a beam of 45ft and were armed with three 6in guns and smaller armament.

Among the larger ships built by Vickers prior to 1914 we may recall the battle-cruiser "Princess Royal," the battleship "Vanguard" and the light cruiser "Liverpool," the dreadnought "Revenge," many other naval vessels, and numerous submarines.

Ships for other navies with the design of which Sir George was closely connected included, among others, the "Kongo," one-time flagship of the Japanese fleet, and the "Mikasa" and "Katori," both Japanese battleships. For the Russian Navy he designed the "Rurik," which served for some time as the flagship of the Russian Baltic Fleet. Other ships for which Sir George was responsible were naval vessels for Turkey, Greece, the South American Republics, and Spain. He was also given charge of the design and construction of reinforced concrete ships which were built at the Forth Shipbuilding Company at Alloa.

Sir George Thurston was a valued member of the Institution of Naval Architects, and among papers he presented to the Institution we may mention that of April, 1914, on "Some Questions Relating to Battleship Design," and his paper of March, 1918, on "Design and Construction of a Self-Propelled Reinforced Concrete Seagoing Cargo Steamer Building in Great Britain."

In 1923 he served on the Council of the Institution. Towards the end of his career Sir George was made naval director of Vickers Ltd., and for some years he was at Vickers House, Broadway, Westminster. He was a member of the Institution of Civil Engineers and. the French Association Technique Maritime.

In 1930 he retired from Vickers-Armstrongs and then for eight years acted as consultant to the firm, from his own offices at Windsor House, Victoria Street, Westminster. He continued to practise as a consulting naval architect until his final retirement.

In 1920, in recognition of his work he was created K.B.E., and he also received the Japanese honour of the Order of the Rising Sun and the Spanish Order of Merit.