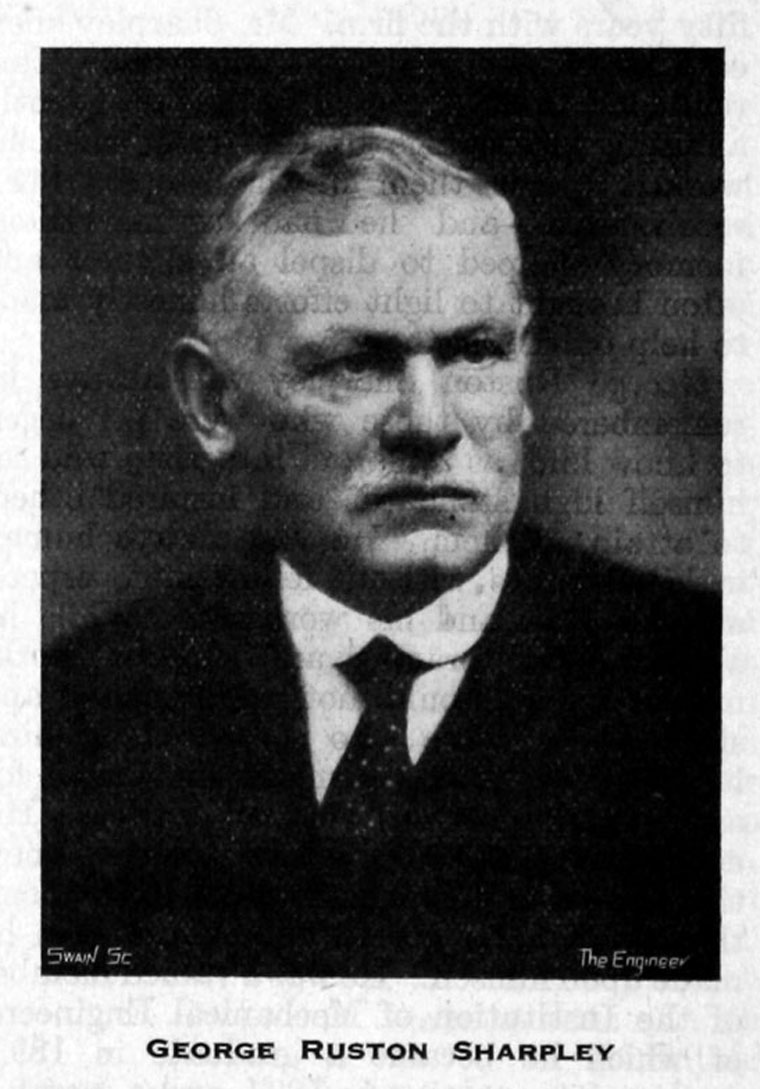 "As briefly recorded in our last issue, the death took place on Sunday, January 11th, at his home, "Eastfield," Lincoln, following a short illness, of Mr. George Ruston Sharpley, the chairman of Ruston and Hornsby, Ltd., and its associated firms. Mr. Sharpley was in his 77th year, and had served his firm for over sixty years. His death will be deeply mourned alike by his workpeople and staff, for he was an outstanding leader in industry, whose constant aim was to raise the standard of industrial and trade practice, as between competitors, to the highest level of rectitude, which was set by his own deeply religious convictions.

He was largely responsible for the growth of his firm and its feats of production in two world wars, and in the difficult years between them, when he fought hard and successfully for the maintenance of the business and the welfare of his workpeople.

Mr. Sharpley was the son of the late Mr. Henry Sharpley, a farmer of Limber, Lincolnshire, and a nephew of Mr. Joseph Ruston, one of the founders of the firm. He entered the Lincoln works at the early ago of sixteen, at a time when the company was busily engaged on the construction of locomotives and excavators for the building of the Manchester Ship Canal. At that time much of the present Ruston works was farmland and the boiler shop was not then built.

From the beginning, Mr. Sharpley had an engineering turn of mind and was interested in workshop practice and production, and it was not long before he was marked out for a managerial position. At the early age of twenty-three he was appointed works manager, and in 1918, when the two concerns of Ruston Proctor and Co., Ltd., of Lincoln, and Richard Hornsby and Sons, Ltd., of Grantham, were amalgamated, he became, along with Mr. David Roberts, of Grantham, joint managing director of the new Ruston and Hornsby Company, Ltd. Two years later, in 1920, he was appointed the sole managing director of the firm...Read more

"GEORGE RUSTON SHARPLEY was associated with the firm of Messrs. Ruston and Hornsby, Ltd., Sheaf Iron Works, Lincoln, for the very long period of sixty years, and had been chairman since 1939.

He was born in 1871 and entered the works (of which his uncle, the late Mr. Joseph Ruston, was the founder), as a pupil in 1888. After six years' practical training he gained further experience in the drawing office, in the meantime attending the Lincoln Science School for his technical instruction. At that time the firm were building four and six-wheel locomotives and producing with all possible dispatch excavators for the construction of the Manchester Ship Canal. At an early age he was appointed assistant works manager and five years later he was promoted to the post of works manager.

It was in 1919 that he became joint managing director and two years later he became sole managing director, continuing to hold office until his resignation in 1943, but remaining, however, chairman of the company until his death which occurred at Lincoln on 11th January 1948. Mr. Sharpley was responsible for the production of some of the first oil engines made by his firm and lived to see the change from the early slow-speed horizontal type to the present high-speed vertical engine with its wide industrial and marine applications. Ever ready to adopt new methods, the works were greatly extended and modernized under his direction. In this connection he travelled widely in the interests of his firm and in 1928 made a world tour. Mr. Sharpley had been a Member of the Institution for no less than fifty-five years, having been elected a Graduate in 1893 and transferred to Associate Member ship in 1897, and to Membership in 1900. The many positions he held included those of chairman of Messrs. Davey, Paxman and Company, Ltd., Colchester, and vice-chairman of Messrs. Ruston-Bucyrus, Ltd., Lincoln. He was also a director of Messrs. Ransomes, Sims and Jefferies, Ltd., Ipswich, and of Messrs. Ruston and Hornsby, Australia (Pty.), Ltd. He was made a Justice of the Peace for Lincoln in 1916 and served as City Sheriff in 1946."