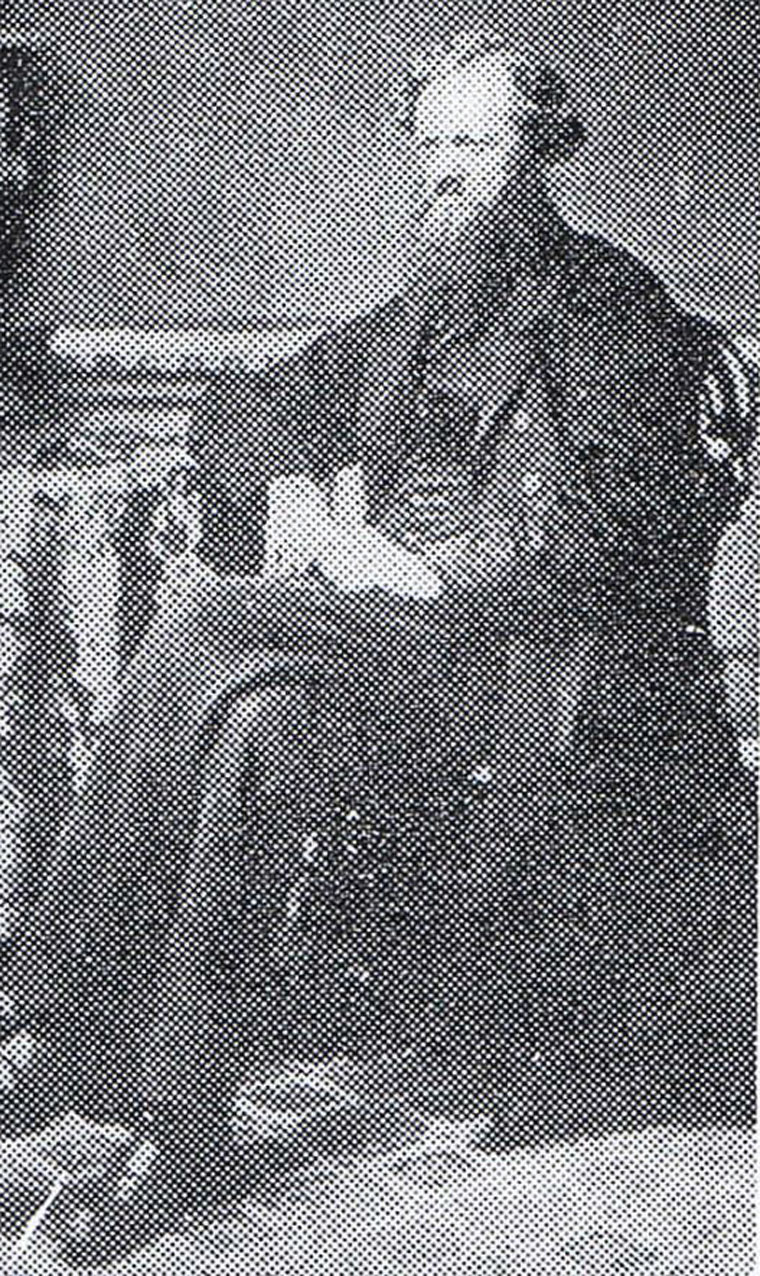 George Parry (1813-1873) of the Ebbw Vale Co, where he introduced significant improvements to iron and steel production, including the cup-and-cone device for feeding and sealing blast furnaces.

1873 'Death of Mr George Parry -We regret to announce the death of Mr. George Parry, at his residence, Steel Villa, Ferryside, on the 6th inst. The deceased was a gentleman, well known throughout the Ebbw Vale district, where he formerly lived, and other parts of Glamorganshire. Not many years since he obtained a patent for steel, which he sold for £30,000. Mr. Parry had been ill for a considerable time before his demise, owing partly to the great strain his constitution endured at the time of his arduous study to gain his design. His loss will be greatly felt by all classes of people.' [1]

George Parry was born in 1813 at Ebbw Vale, near Newport, Monmouthshire, at which place and at the neighbouring town of Abergavenny, he received such an education as its schools afforded.

Leaving school at a comparatively early age, he commenced business with his father, a retail dealer in groceries, &c., a business for which he was eminently unfitted, and in which he took but little interest; indeed he was often censured for wasting his time in what appeared to his parents idle and profitless studies.

Even at this early age he manifested a special aptitude for the study of physics, and the whole of his spare time was passed in the construction of philosophical apparatus. During this period he acquired great mechanical skill, which, combined with considerable inventive power, later on became invaluable to him. The country at that time having no railway and but few roads, there were not many opportunities of communicating with the scientific world or with men of kindred tastes. Some idea may therefore be formed of the difficulties encountered and mastered by Parry in the pursuit of knowledge. In spite of these drawbacks he studied with success astronomy, geology, chemistry and the manufacture of iron, and he ultimately relinquished his more favourite study of astronomy and devoted himself entirely to the chemistry of iron manufacture, making analyses of the iron ores, coal, &c., in the district, and holding consultations with the resident iron manufacturers, who soon learned to value and utilize his chemical and metallurgical knowledge.

About the time the hot blast was introduced ; he rendered great assistance, and designed a hot blast stove, which is even now in use, and is considered by many as superior to some more recently designed.

Parry took a prominent part in utilizing the black-band ironstone, found in large quantities in the neighbourhood, making analyses and rendering considerable service in carrying out the smelting of this ore, which was at first attended with considerable difficulties.

In 1848 he obtained the appointment of metallurgical and consulting chemist at the Ebbw Vale iron works, and from that time until within a few years of his death, he applied himself solely to the metallurgy of iron, working unceasingly and ever alive to anything which bore upon the manufacture, or was calculated to lead to improvements in it. He first directed his attention to the blast furnaces, and under his management plans for utilizing waste gases were designed, special attention being paid to the proper admixture of the gases with air to insure proper combustion. He also, in a series of papers written for the South Wales Institute of Engineers, showed that, in any given plane at right angles to the longitudinal axis of the furnace, it was necessary that the temperature should be uniform, otherwise the materials at the higher temperature would be reduced more rapidly than those at the lower; he prescribed the form of furnace most suitable and the other conditions necessary for the economical reduction of iron ore.

In 1854 the late Mr. J. Nasmyth proposed using steam for the more efficient purification of crude iron in the puddling furnace ; this was tried at Ebbw Vale under Mr. Parry’s superintendence, but ordinary steam could not be applied for any sufficient length of time, the iron cooling too rapidly. Mr. Parry tried superheated steam, heated by the waste heat of the furnace, with considerable success ; the cooling action was much lessened, and the crude iron more effectually and rapidly puddled. Yet even superheated steam could only be applied to the puddling of grey iron, the ordinary white pig universally used in the district, even with superheated steam, cooling too rapidly ; it was therefore, in combination with jets of air, used only for the refining of iron, producing a very superior refined metal, which was manufactured at the Ebbw Vale works until the use of refined metal was altogether given up.

About the year 1857 Mr. J. Martin proposed refining iron by passing air through the fluid metal whilst running down iron troughs, which were perforated with minute holes through which blast was passed. Mr. Parry considered that the metal could not be thus refined to any extent, owing to the short time to which it was exposed to the blast of air, and proposed blowing the iron in a closed vessel, the bottom of which was perforated ; this was done, and the iron became so hot that in a very short time the bottom melted down and the fluid contents of the furnace were lost.

It was noted that refined metal had been produced, also that the temperature, contrary to expectation, had increased, and the experiment would have been repeated, but in a few days the publication of Mr. Bessemer’s paper, showing that iron could be blown in the way indicated and remain fluid, explained all and rendered further experiments unnecessary.

Seeing that Bessemer steel could be produced only from pure ores, of which there then seemed to be only a limited supply, Parry next directed his attention to the utilization of ordinary pig iron, observing that there was only one way of eliminating the excess of sulphur and phosphorus, viz., the puddling process. He thought that if the puddle-bar therefrom could be fused, it might be used for the manufacture of steel. Taught by previous experience, he thought that if, instead of blowing in the blast through horizontal tuyers, as practised in the ordinary cast-iron melting cupola, he inclined the tuyers so as to blow down on the red-hot puddle-bar, charged into the furnace with coke, sufficient heat might be generated to fuze the wrought iron.

The result far exceeded expectation. Not only was the wrought iron fused, but it took up about 2 per cent. of carbon; in fact, the fused product was simply a pure cast iron, which only required treatment by the Bessemer process for its conversion into steel.

This process was carried on with success at the Ebbw Vale works for some time, but ultimately it was found to be too costly, as compared with the Bessemer process, and the manufacture was therefore abandoned.

From 1857 to 1864 Parry was constantly occupied in carrying out his own processes, and in experimenting with the Bessemer process, which was then little understood. This work involved a vast amount of exertion, both mental and physical, under which his not very robust health gave way.

In 1866 he gave up his appointment and retired to Ferryside, a village near the sea in Carmarthenshire. Here he rallied for a short time, but it was evident that, his constitution had been completely undermined ; latterly, however, he suffered little, and died after only a short illness 6th February, 1873.

Mr. Parry was respected and esteemed very highly by the few who knew him intimately. His mind was always active, and to the few who knew him he would confide from time to time the results of weeks’ hard study and meditation, inspiring admiration by the originality and boldness of his conceptions.

He seemed to possess in a very unusual degree the faculty of concentrating his whole energies on the subject under consideration, to the total exclusion of everything else, and never rested until he had fairly exhausted the subject. To the possession of this faculty may be attributed his success in mastering the most difficult and abstruse subjects without assistance of any kind.