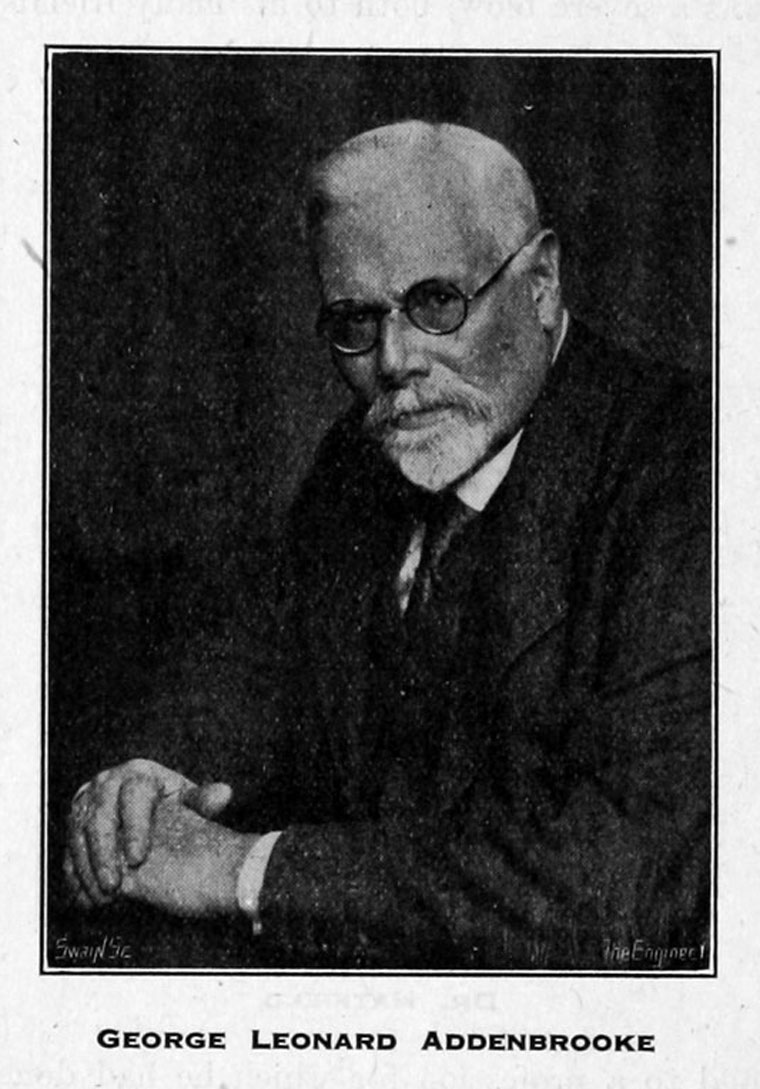 BY the death of Mr. George Leonard Addenbrooke, of 35, Holland Villas Road, Kensington, London, W.l4, which occurred at Chalfont St. Giles on Tuesday, October 12th, a further link has been severed with the early development of electric power and lighting in this country.

Addenbrooke, who was in his eighty-fourth year, came of a family of ironmasters. He received his early education at Winchester School, after which he matriculated at London University.

His first business position was in the office of the London agents of the British India Steam Navigation Company, Ltd. For four years he studied the mercantile business, but on the strong advice of his friend, Sir Edwin Dawes, decided to adopt engineering as a career, and shortly afterwards joined the staff of the United Telephone Company. For about one year he was engaged on overhead wiring work, after which he was appointed to the estimating department and given charge of that work. Advancement continued, and for two years he held the office of chief of the testing and trunk line department, gaining wide experience of cable testing and experimental work. In 1885, in conjunction with Mr. Ferranti, he was granted a patent for a new method of working double-trunk lines in connection with single subscriber's lines, which the company used on a large scale.

The year following he joined Mr. Ferranti at the Grosvenor Gallery power station, where he was given charge of the overhead lines and the customers' installations. In addition, he gave considerable assistance in the engine-room and with the general running of the plant.

In 1887 he severed his connection with Ferranti and set up a practice as consulting engineer in London.

Some time in 1888 he went to Australia for Messrs. Gray, Dawes and Co., where he took charge of the installation of electric light in seven large coasting steamers. When that work was accomplished he paid a visit to the Australian goldfields, and to some of the leading towns, and reported on the possible applications of electric lighting and power.

On the return journey he visited Spain on behalf of Crompton and Co., and after a few months' connection with the House-to-House Company, resumed practice on his own account.

This work, with the exception of a short time with the Electric Construction Company, Ltd., during its change of management, occupied his attention until the last. Addenbrooke was the originator of the scheme for the supply of electric light and power to the Black Country, which later became known as the Midland Electric Corporation for Power Distribution, Ltd., and was engineer to the promoters of that scheme. He was also connected with the power distribution schemes for Warwickshire, Shropshire, Staffordshire, and Kent.

A man of the widest interests, he was one of a small band of enthusiasts which was formed to investigate the possibility of generating electricity by tidal power, particularly in connection with the River Severn. That work was well done, and when evidence was given on the scheme at a later date, much of the original work of Addenbrooke and his friends was incorporated in the report on the Severn barrage scheme. Apart from his consulting work, he spent much time in his own private laboratory, giving attention to the measurement of alternating currents. He worked out a complete set of instruments and a special system, which he described in a paper on "The Accurate Measurement of Alternating and Multi-phase Currents," delivered before the International Congress of Electrical Engineers, held in Paris in 1900. The set of instruments and apparatus was exhibited, and evoked considerable interest.

In recent years he was engaged on the investigation of the nature of solid insulation and the determination of the electrical losses which take place.

Addenbrooke was an early and valued member of the Institution of Electrical Engineers, before which he read papers and frequently took part in discussions. For seven years he was on the Council of the Royal Photographic Society, and he was also a Fellow of the Physical Society, to whose "Proceedings" he frequently contributed.

He will always be remembered amongst the survivors of that dwindling band of pioneers who devoted their lives to the problems of electricity transmission as a man of exceptional ability and perseverance. He was of a retiring disposition, and was in consequence only well known by those who counted him amongst their valued friends. Had he been differently constituted, he would have made a greater mark in the world and the value of the work he did would have been more justly valued.