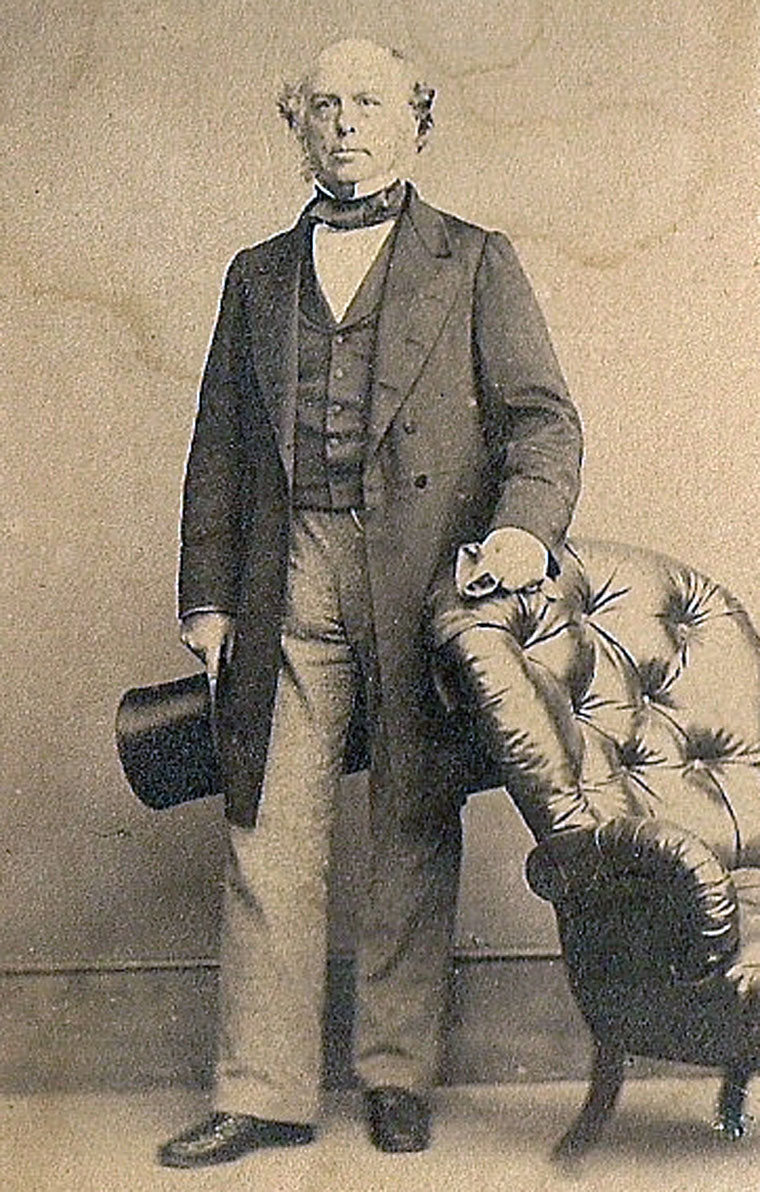 Bardney Bridge carrying the GNR over the River Witham where it crossed from the left bank to the right bank, about 10 miles southeast of Lincoln. (Illustrated London News, 28 October 1848). 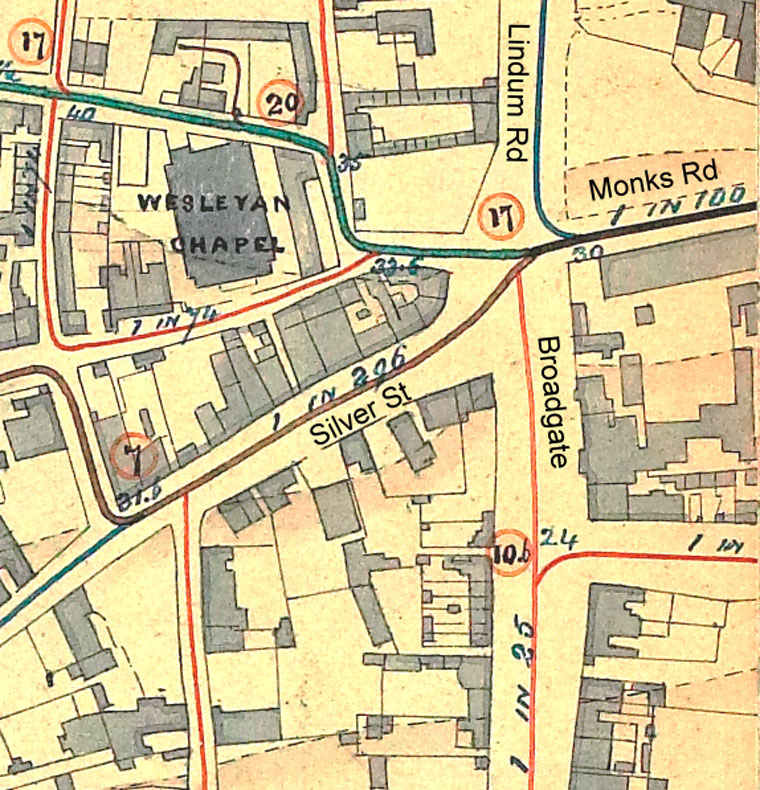 Part of the Broadgate area of Lincoln, from Giles’ 20-inch plan of proposed sewerage, 1849. Lines down the streets show intended sewers, colours and widths indicating cross-sectional sizes. Numbers in red circles indicate the depths of the sewer trenches below the road surface. Small numbers not in circles are inverts, or the heights of sewers above the local datum level. (From the Local Studies Collection, Lincoln Central Library, by courtesy of Lincolnshire County Council). 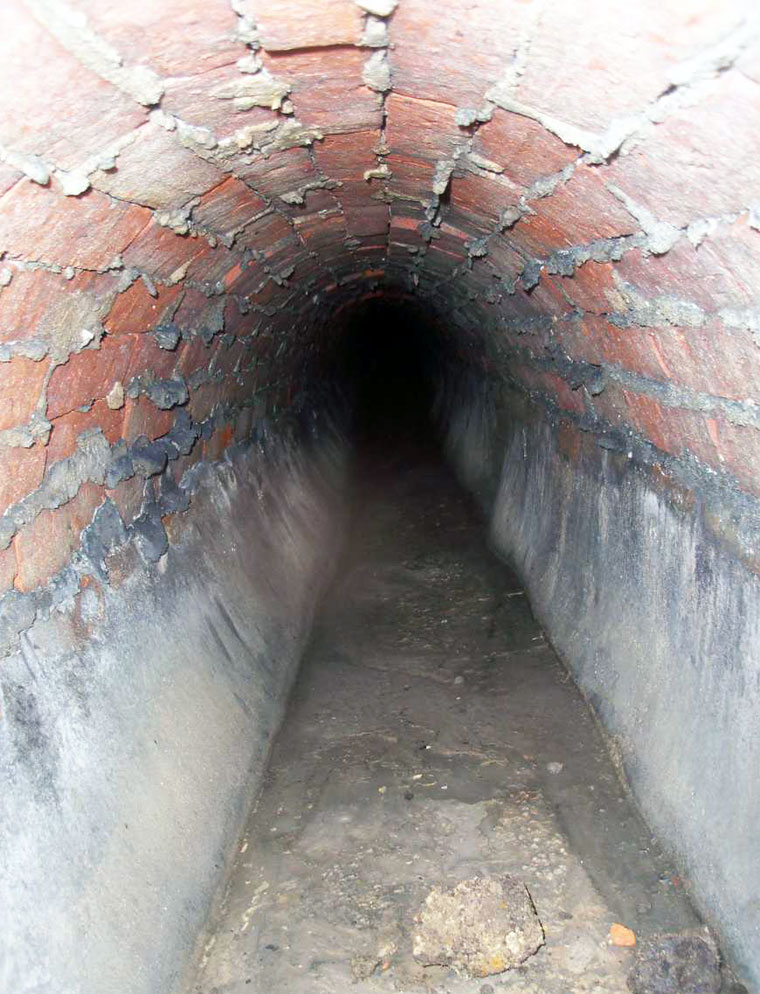 Sewer of egg-shaped cross section discovered by archaeologists near the County Prison building of 1847 within Lincoln Castle. Internal diameter 0.45m (c.18in.). The lower part had been covered in concrete to prevent downward seepage. Giles was almost certainly responsible for advising the castle surveyors to use this design, as in 1847 it was only just coming into use in Hamburg and London. (By kind permission of FAS-Heritage, courtesy of Dr Nicola Toop).

Hilton House, at the junction of Union Road (left) and Drury Lane, Lincoln, where Giles lived 1847-52. The house is associated with the artists William Hilton R.A. and Peter De Wint, the latter being the occupier previous to Giles. (Photo, Dennis Mills, 2009).

Note: This is a sub-section of George Giles

Giles was born at Walton-on-Thames, Surrey in 1810, the son of Peter and Elizabeth (nee Hone). His father was probably a farmer, but the family members who most influenced his career would have been the surveyors/engineers Netlam Giles (1775-1816) and more especially Francis John Giles (1787-1847), who were his uncles.

As head of the family firm, it was Francis John in the late 1820s into the early 1830s who introduced George to the profession. Another of his trainees in this period was William Lindley who achieved fame in Germany, where he lived for many years, becoming regarded as the father of German urban planning.

Giles’ earliest work was in railway building, which was to remain his main field of activity, but by no means the only one. In his mid-20s, from c.1834 he was resident engineer on the Winchester-Southampton section of the London and Southampton Railway.

Later the contractors McIntosh and Betts employed Giles for the viaduct over the River Avon at Rugby, completed in 1839. In 1841 he married Elizabeth, daughter of William Betts, opening up an important connection to the firm of Peto and Betts.

Before this connection became operative, however, he worked in Hamburg during the period 1839-46, where he was resident engineer under William Lindley, consulting engineer to the city-state. He was responsible for its first railway, from the city centre to Bergedorf across the Hammerbrook marshes, which Giles had to drain first and was opened in 1842. Other projects included sewerage, waterworks, canals and bridges.

About December 1846 Giles returned to England for ‘personal’ reasons - probably the health of his father and his uncle Francis John, who both died in 1847. He was in Lincoln by March 1847 engaged on the construction of the Great Northern Railway ‘Loop Line’ from Peterborough to Gainsborough via Lincoln, working as a contractor’s agent for the firm of Peto and Betts. Edward Betts was Giles’ brother-in-law through his sister, and was also married to Peto’s sister Ann.

Giles used the city as a base convenient for the Gainsborough-Lincoln section and for the section between Lincoln and Boston, or a substantial portion of it. The line opened in the latter section in October 1848, and the single-track extension to Gainsborough was brought into use in April 1849.

By coincidence, in 1848 Lincoln City Council needed to consult an engineer to advise it as to what it should do to meet the challenge imposed by new national regulations, its sanitary condition not being up to the standards brought into use under the Public Health Act of 1848. Lincoln was then a small city with a population of only about 17,500. There appear to have been no other formally qualified civil engineers in the city, although it had surveyors who looked after the castle, the cathedral and the turnpikes, and the bridges on the county’s main roads. With his railway work approaching completion, Giles could respond positively to an invitation from the Council’s Sanitary Committee in December 1848, with a formal contract following on 1 January 1849.

Giles presented his 12,000-word report to the Committee in September of that year, comprising a 9,000-word section describing the sanitary condition of the city (including two detailed studies of selected problem areas, with illustrations) and a 3,000-word section containing his proposals for action. A plan of the whole city at 40-inches to the mile supported these, from which contractors could have worked. The report was a remarkable piece of work, and even more remarkable is its survival.

Giles proposed a completely new and comprehensive underground sewerage system, leaving the ad hoc mixture of open channels and short lengths of covered drain to deal with surface water. About two-thirds of the built-up area was situated on the scarp face and plateau above the River Witham. Thus, Giles proposed to use gravity alone to avoid having to pump waste to a depot just outside the city limits. The river itself was shallow and slow moving in summer months so it was not to act as a conduit in anyway, the built-up areas on the flood plain to be serviced by a steam pump at the depot.

The latest innovations would have been included: firstly, much deeper sewers than was customary, but with smaller dimensions made possible by using egg-shaped cross sections; secondly, the use of pipes instead of brickwork for the smallest sewers; and thirdly, curving rather than right-angled corners, with tangential junctions to improve the flow.

All this would have cost almost £30,000, which immediately set up an outcry amongst the smaller ratepayers, although a favourable Treasury loan would have been available. Although the City Council was well disposed towards Giles’ proposals, it was unwilling to adopt them without first gaining public support.

Consequently, it ordered the printing of 500 copies of both Giles’ report and that of Alderman Swan, chairman of the Sanitary Committee, in which he assessed the legal implications involved. Many of the copies were given away, for example, probably to members of the 15 parish vestries within the city, and others were sold at only one shilling each.

This consultation exercise was continued through two public meetings, the first held in January 1850, which ended in the confusion caused by working class ‘roughs’ who had been ‘persuaded’ to take part by the lower middle class objectors.

The Council then amended the financial plan by bringing forward proposals to sell off some roadside strips of the South Common as house plots, which immediately caused fierce opposition from the numerous city freemen whose common rights would have been downgraded. So it is no surprise that the Council lost the day when a second unruly public meeting was held in May 1850, and it was not until 1881 that the city obtained a comprehensive underground sewerage system.

Giles had probably hoped to obtain the contract for the construction of the sewerage system, and although visiting France in 1850, he also took on other minor commissions of a varied nature in the Lincoln area and did not finally leave the city until 1852.

One of these commissions concerned the Lincoln-Gainsborough section of the ‘Loop Line’, which Giles had built on the bank of the Fossdyke Navigation between Lincoln and Saxilby, a distance of six miles. For this purpose ‘delphs’ (borrow-pits) had been dug to provide earth to make the bank wide enough for two tracks, but Giles had been asked to lay only one track.

After April 1849 when the line was opened, a dispute arose between the GNR and Richard Ellison, the owner of the Navigation. Ellison asked Giles for advice concerning the amount of land that had been taken for the delphs. Giles calculated that, if the delphs had been dug to what he considered the practicable depth, the GNR could have used eight acres less than they had actually taken. The matter went to arbitration, including referral to an umpire. His award, made on 26 June 1850, was largely in favour of the GNR.

Giles obtained several other commissions during 1849-52, including one relating to drainage and sewerage at Bridgnorth in January 1850, a date before the final result of the Lincoln report was known. Railway business took him to Bangor in September 1851, and to Holyhead in March 1852. In the Lincoln area he worked on several drainage problems in 1849-51 for the Lincoln West Drainage authority and for Lord Monson, a large landowner north-west of the city. He also found time to take a holiday on the continent in 1850, which could be the reason his Obituary states that he went to France that year.

It seems that Giles was reluctant to leave Lincoln, and this may have been partly because of his wife’s views, as four of their eleven children were born in Lincoln and Elizabeth may have become attached to the house and her Lincoln friends. However, the ‘Railway Mania’ was over by 1850 and for a man who was most of all a railway engineer the continent must have exerted a big influence. On 15-16 May, 1852 a very large amount of his furniture was auctioned at Hilton House and newspaper searches for him have produced no results after that date.

The remainder of Giles’ career was spent on continental railway projects mostly, if not all for the Peto and Betts firm, as reported in his Obituary, with the exception that modern railway sources do not include a reference to a line through the Euphrates valley to the head of the Persian Gulf in this period.

The Giles family were very much an engineering family. In the generation before George, Netlam (b.1775) and Francis John (b.1787) have been mentioned above. In George’s generation three cousins were engineers: Francis (of Carshalton, b.1806), Francis George (b.1815) and Alfred (b.1816). Alfred had a son called George (b.1853) who became an engineer and (our) George had two sons who were engineers – Philip (b. 1852 – in Lincoln) and Walter (b.1859), whilst there was also an engineer grandson called Humphrey (b.1880), son of George Edward Giles. This adds up to ten Giles engineers.

Dennis R Mills, ‘George Giles, MICE, 1810-1877: the biography of a civil engineer’, Journal of the Railway and Canal Historical Society, vol.38, part 9, no.227, November 2016, pp.538-550. This article contains further information as to the early planning of the first Hamburg railway and is the basic source for the present article, except as otherwise stated.

Dennis R Mills, Effluence and Influence: public health, sewers and politics in Lincoln, 1848-50, Lincoln: Society for Lincolnshire History and Archaeology, 2015. This 165-page book contains the whole of this report, as well as Giles’ 20-inch manuscript plan, divided into sections in a 16-page atlas section. Giles left the Town Clerk copies of both reports with this folded plan in a personal binding bearing his arms. These eventually found their way into the Lincoln Public Library and were on the open(!) shelves of the Lincoln Central Library when found by the present author, who arranged for the plan to be scanned and the whole document to be put in a place of safety.