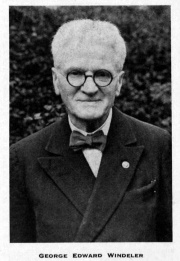 "...Goorge Edward Windeler was born in Cork, Ireland, in 1874. He went with his father, who was in military service, to India, and the early part of his general education was obtained in European schools in India..." Read more

"GEORGE EDWARD WINDELER, who was one of the pioneers and leading figures in the British oil engine industry, was born in Cork in 1874, but at an early age he went with his family to India, where his father was on military service, and there he received part of his early education at an English school. In 1883 he returned to England, and continued his education at the Workington Secondary School. His technical education was acquired at Wigan, London, and Manchester. His practical training began with the West Cumberland Iron and Steel Co, where he was employed for three years in the pattern shop and on steel production, and this was followed by eighteen months on the design and repair of small high-speed steam engines with Thomas Johnson, Wigan, and a further three years in the drawing office and test-bed with Walker Brothers, Wigan.

About 1890 he joined the firm of Ferranti and Company, Ltd., London, where he was employed on the design of high-speed steam engines and alternators for electric power generation. In a short time he was transferred to the firm's Hollinwood works as chief designer on the engine side, and was later employed as plant engineer.

About 1902 Mr. Windeler joined the late Mr. Charles Day, as manager of the Diesel engine department at the Mirrlees Watson Company, Ltd., Glasgow. Here, on a single-cylinder engine, Mr. Windeler carried out his pioneer experiments on cylinder lubrication, floating gudgeon-pin, two-and three-stage air compressors, and other improvements. Ultimately a four-cylinder 160 b.h.p. Diesel engine was designed and built, which was directly coupled to a dynamo running at 400 r.p.m. and installed in HMS Dreadnought. Simultaneously, a four-cylinder engine of lighter design, developing 120 b.h.p. at 400 r.p.m., was produced for the propulsion of naval pinnaces. The success attending these engines led to their extensive use in other capital ships, and the general expansion of business necessitated the transference of the Diesel engine side of the work to the new works of Mirrlees, Bickerton and Day, Ltd., at Stockport, in 1908.

In 1916 the firm became the parent contractors for the construction of the Ricardo high-speed engines for tanks, and the manner in which Mr. Windeler, as chief engineer, organized and carried out the work for his own firm and associated companies earned the warm thanks of Sir Harry Ricardo.

At this time the writer joined the firm as works manager, and, although he had known "G. E. W." (as he was familiarly called) for many years, it was only as an associate that he appreciated his versatility and congeniality and his intense interest in the welfare of young folk.

In 1928 Mr. Windeler left to take up consulting work under the style of Rhodes and Windeler. The firm specialized in mechanical equipment and plant, investigating breakdowns and accidents, and was consultant to the Ashanti Goldfield Corporation and other African firms.

In addition to contributing papers to the various technical institutions he readily responded to the call of the junior member, to whom he lectured on mechanical breakdowns, mishaps, vibration and alignment, on which subjects he had plenty of examples to illustrate his points.

Because of his wide experience, his advice was frequently sought and readily given. To the young engineer, who served under him, he was an inspiration and he will be remembered by them with gratitude. He was a delightful colleague, whose passing is deplored. His death occurred on 24th February 1950."