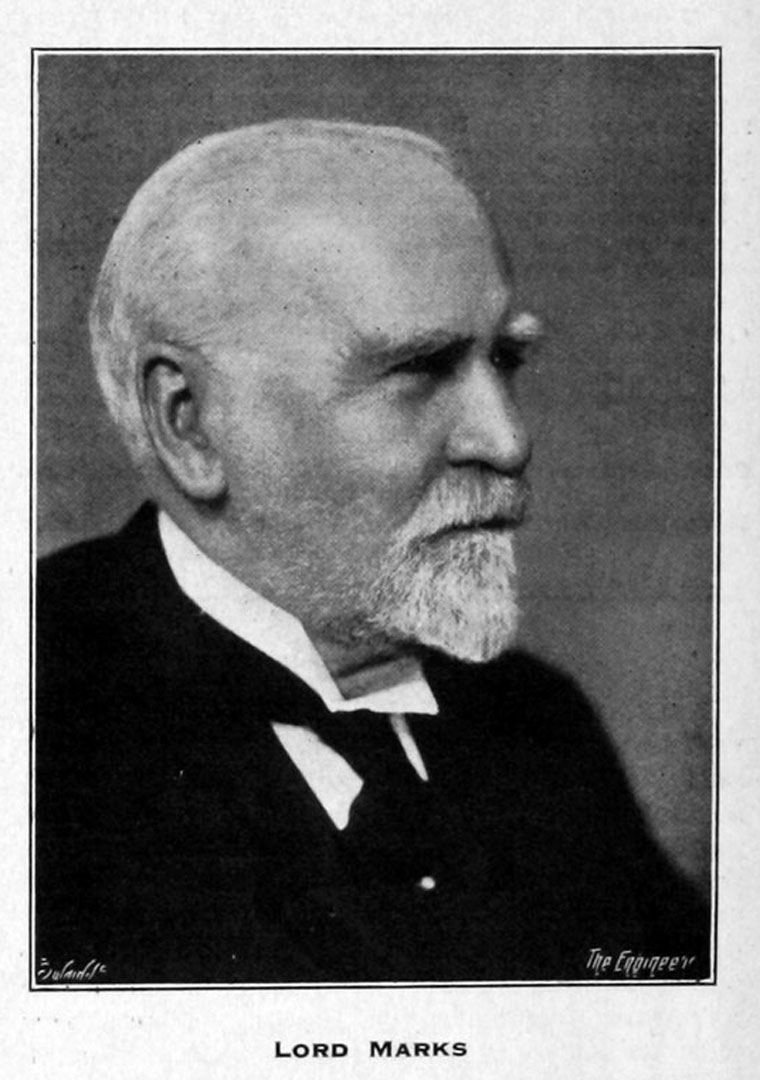 George Croydon Marks, 1st Baron Marks (9 June 1858 - 24 September 1938), known as Sir George Marks between 1911 and 1929, was an English engineer, patent agent and Liberal (later Labour) politician. Noted by many as a disciple of Brunel.

Marks was born in Eltham in Kent, the eldest of seven children of William Marks (b. 1834 Wellington, Somerset) and Amelia Adelaide Croydon (b.1832 Mangotsfield, Glos); only four survived childhood. William Marks worked at the Royal Arsenal in Woolwich.

Educated at a private day-school in Eltham

1875 Granted leave of absence from Woolwich. He was one of the first Whitworth scholars and completed his education at King's College, University of London.

1878 Draughtsman at the Royal Laboratory, Woolwich

1880 Entered the drawing office of Easton and Anderson, of London and Erith

1881 Married Margaret Maynard in Watford[1]; they never had any children.

1882 he joined Tangyes as a leading draughtsman for hydraulic machinery. The works were closely associated with funicular lifts, and he was said to be responsible for the design of the (hydraulic machinery) for the Saltburn Cliff Lift. Later, Marks claimed to be head of the lifting machinery department[2]

1883 Moved to Ross and Walpole, North Wall, Dublin as chief draughtsman and engineer

1887 Set up a private practice as consulting engineer in Birmingham

1888 of 13 Temple St, Birmingham. Also lecturer in steam and mechanical engineering at Birmingham and Midland Institute.

1889 he formed a partnership with Dugald Clerk as consulting engineers and patent agents, which later became the international intellectual property firm Marks and Clerk. Developed a number of cliff railways and steep-incline tramcar systems in close association with Sir George Newnes, including the Lynton and Lynmouth Cliff Railway, the Clifton Spa Railway in Bristol, Bridgnorth Cliff Railway and the Constitution Hill Railway in Aberystwyth, and an early stage development of Babbacombe Cliff Railway.

1891 Living at Handsworth, Birmingham; his brother Edward, also a civil engineer, lived there too.

1893 Competed the steep-incline cable-hauled tramway in Matlock, Derbyshire. The practice moved to Lincoln's Inn Fields in London, with branches in Birmingham and Manchester. Advertised the patents agency as The "Practical Engineer", Patent Agency

1894 Awarded a Telford Premium, for paper on "Cliff Railways."

1894 Marks was appointed consulting engineer to the Duke of Saxe-Coburg and Gotha; he built another cliff railway in Budapest, for which he was rewarded with a knighthood of the Ducal order of Ernest.

Other commissions included the design of the new Gothic pavilion at Aberystwyth Royal Pier.

Marks continued his engineering practice alongside his patent interests.

1911 he set up an office in New York in conjunction with Thomas Edison.

1914 joined the Ministry of Munitions

Chairman of the Edison Phonograph Co and the Columbia Graphophone Co.

1929 left the Liberals and joined Ramsay Macdonald's Labour Party. Raised to the peerage as Baron Marks, of Woolwich in the County of Kent, becoming one of the first two Labour peers to be created.

1931 he was closely involved in the merger of these gramophone companies with the Gramophone Co to form Electrical and Musical Industries Ltd. He was also chairman of the British Equitable Assurance Company.

Marks continued his engineering and business activities and died at his home in Poole, Dorset in September 1938, aged 80. As he had no children, his peerage died with him.

"...the well-known consulting engineer and patent expert, died at his home at Bournemouth on Saturday last, September 24th, at the age of eighty. He had been ill for the past two months. He was senior partner of the firm of Marks and Clerk, of London, Birmingham, Manchester, and New York, and was associated for many years with Sir Dugald Clerk..."[More].

The Rt. Hon. Lord MARKS was well known both as a consulting engineer and patent expert, and for his parliamentary work. As George Croydon Marks, he was born at Eltham in 1858 and was educated at the Royal Arsenal School, Woolwich. In 1871 he commenced his apprenticeship in the Royal Laboratory Department, Woolwich Arsenal. Four years later he obtained a Whitworth Exhibition and studied engineering at King's College, London, until 1877.

After a further period in the drawing office of the Royal Laboratory, he joined Messrs. Easton and Anderson, of Erith, in a similar capacity, and later became chief draughtsman to Messrs. Ross and Walpole, of Dublin. He was subsequently appointed chief of the lifting machinery department at Messrs. Tangyes, Ltd., Birmingham, and in 1887 he went into business on his own account as a consulting engineer in Birmingham. Later he began his association with Sir Dugald Clerk, M.I.Mech.E., (the business becoming known as Messrs. Marks and Clerk) and he established additional offices in London, Manchester, and New York.

At this time he also lectured on steam and mechanical engineering subjects at the Midland Institute and at Birmingham Technical School. As a consultant, his work covered an extremely wide range of important civil engineering works, as well as mechanical, electrical, and hydraulic installations. He was also appointed consulting engineer to the Duke of Edinburgh. He began his political career in 1906 when he was returned to the House of Commons as Liberal M.P. for Launceston (now the North Cornwall Division). He sat for this constituency until 1924, when he was defeated and did not again seek re-election. He was knighted in 1911.

During the War he was appointed a commissioner for the dilution of labour, and in 1916 was entrusted with certain important inquiries conducted abroad for the Ministry of Munitions -, for his services he was awarded the C.B.E. in 1919. In 1929 he announced that he would support the Socialist party, and in the same year he was elevated to the peerage, one of the first two Labour peers to be created.