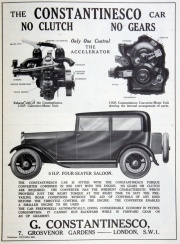 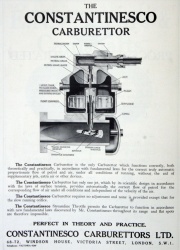 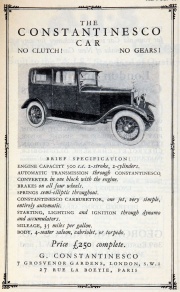 1881 George was born[1] in Roumania, son of Mr. Constantinesco senior, who was a keen mathematician who devoted a large part of his life to a study of the science of musical theory.

George combined his father's love of music and physics with the study of engineering, and in the course of his investigation arrived at the conclusion that, of all musical instruments, the common trombone was probably the most efficient from the point of view of the energy put into it and the energy represented by the volume of sound which it produces. With the imagination of the true inventor and his experience as an engineer, he began speculating as to the possibility of reversing the process, and transmitting power by substantially musical means.

Mr. Constantinesco proceeded to develop his idea experimentally and mathematically and, after bringing it to a practical basis, came to England some time before the outbreak of the WWI.

Constantinesco succeeded in arousing interest in his invention in Walter Haddon, of W. H. Dorman and Co, of Stafford, and an experimental establishment was set up at Alperton, near Ealing (Haddon Engineering Works). With the outbreak of war his thoughts naturally turned to the military applications of his invention. His chief contribution in this respect was a highly important item in the factors which led to aerial supremacy, namely, the "C.C." interrupter gear, which enabled the problem of firing from a machine gun through the propeller of an aeroplane to be satisfactorily solved.

1914 Patents with Walter Haddon on means of supplying fuel to internal combustion engines, and on methods of reversing hydraulic transmission systems

The success of the gun gear led eventually to the Alperton establishment being taken over by the Admiralty and to Mr Constantinesco's being officially employed to conduct research work on other service applications of his principle, which were kept secret although seem not to have been put to use during the War. Nevertheless this laid the foundation of a very important and interesting branch of the subject, namely the application of wave transmission to the production of rotary motion.

The laboratory where Mr. George Constantinesco carried out his experiments on wave power transmission were called the "Sonic Works". In 1920 they were taken over by the Admiralty Engineering Laboratory[4]

1917 Patents on internal combustion engine, and on transmission of power[5]

1919 Awarded £50,000 with Mr Haddon by the Royal Commission for Awards to Inventors, for the C.C. Interrupter Gears.

Post WWI: Mr Haddon acquired the patent rights for wave transmission in the British Isles and Dominions, while Mr. Constantinesco took those for the Continent. The rock drill is one practical application of Mr. Constantinesco's fundamental idea. So far as the application of the principle of wave transmission to rock drills and other percussive tools is concerned, technical development was in the hands of Messrs. Dorman at Stafford.

On the other hand, the technical development of the principle in its application to the production of rotary motion was placed by Mr. Haddon under the charge of Walter N. Duff, of London, who was brought into intimate contact with Mr. Constantinesco's later developments during the war.

1922 Awarded a further £20,000 by the Royal Commission for Awards to Inventors[7] (probably includes £15,000 in respect of communication to the US government of inventions, designs, etc in relation to aircraft and aircraft accessories, specifically for synchronizing gears, awarded with W. Haddon[8])