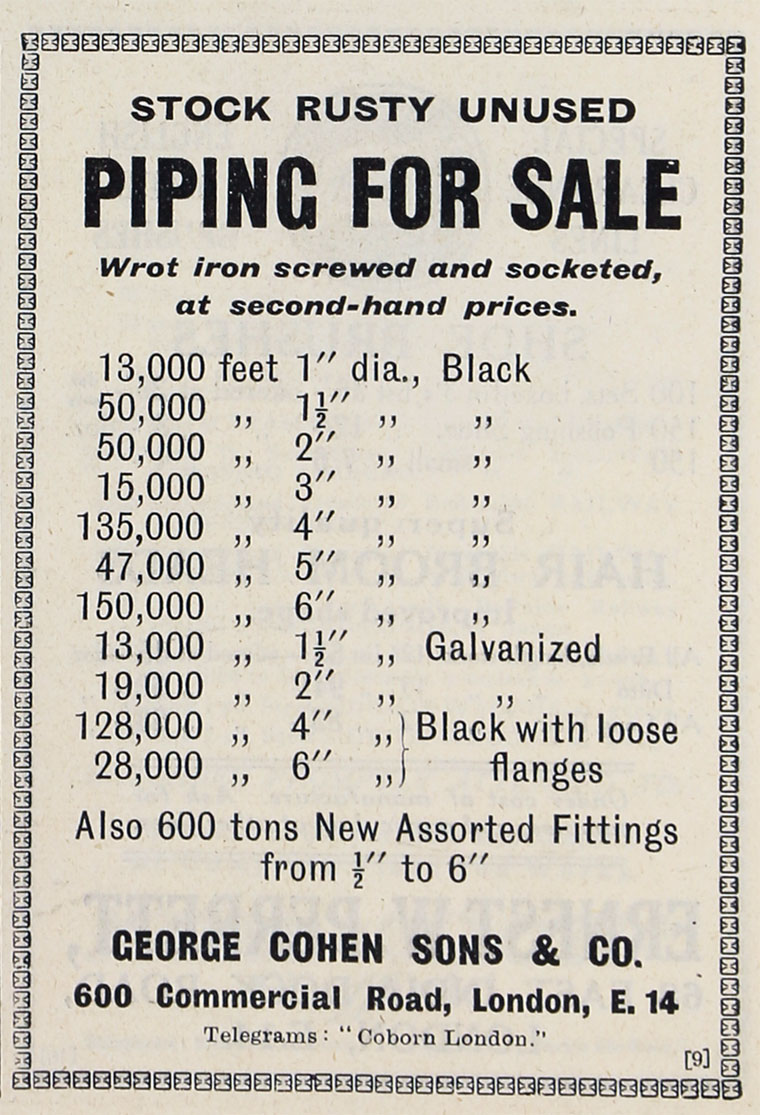 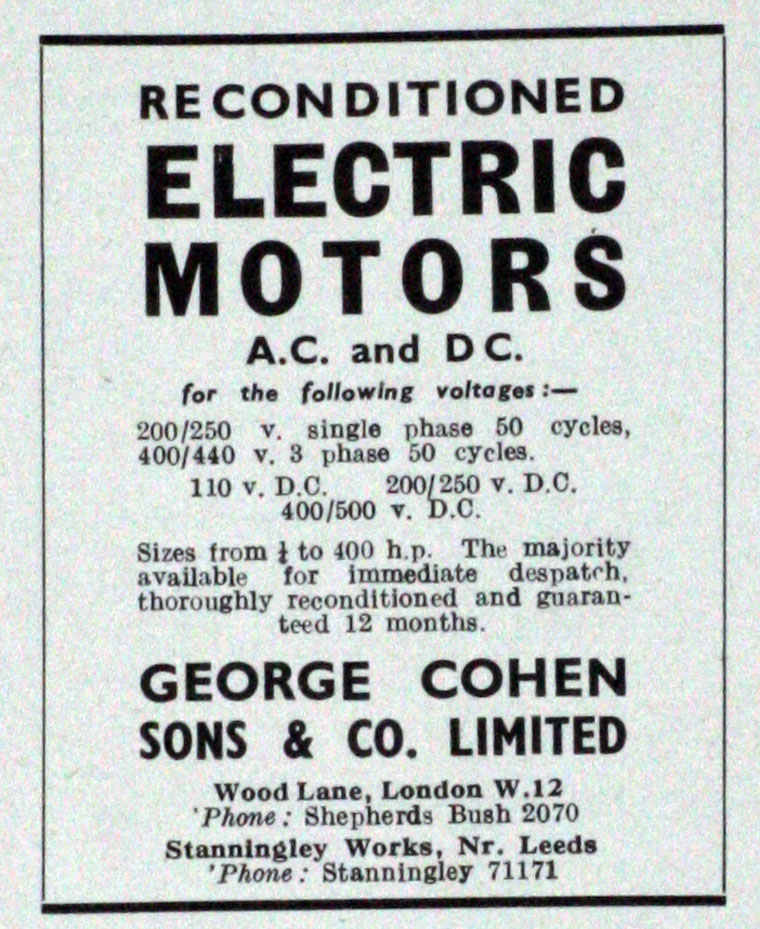 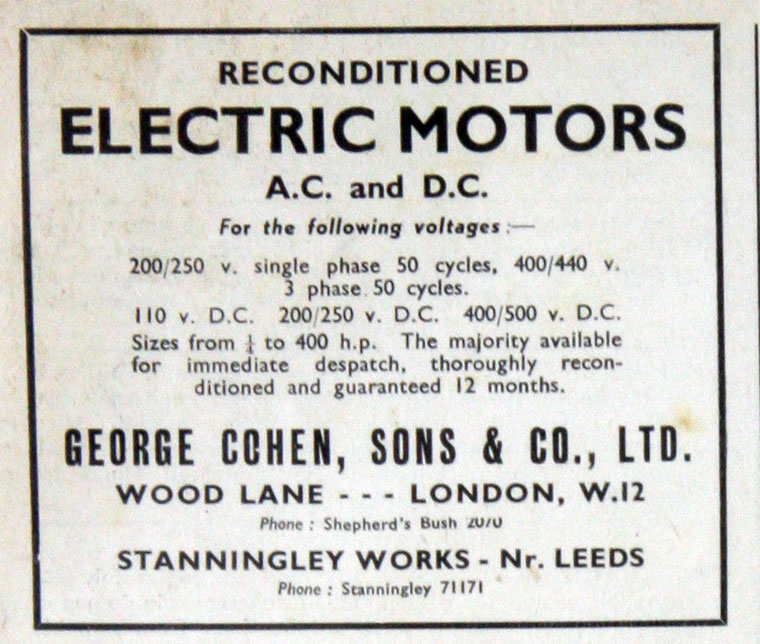 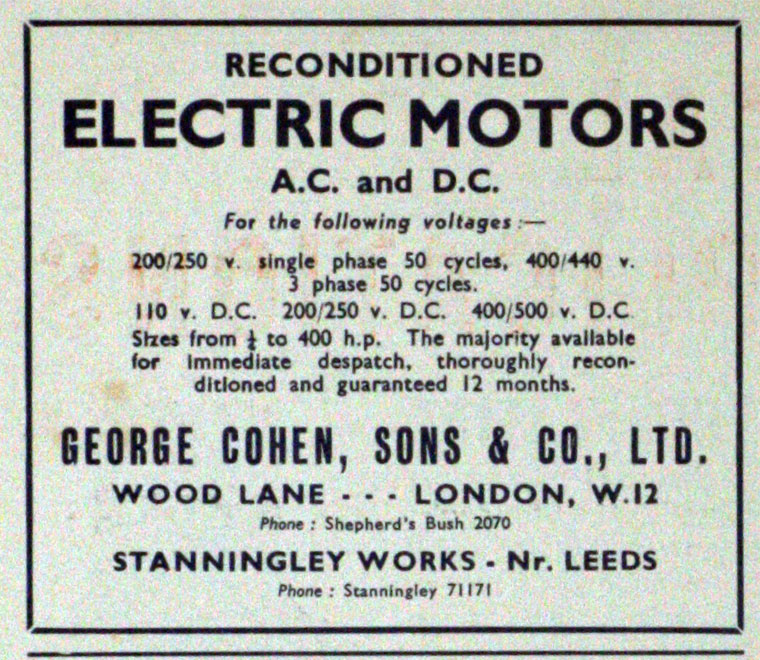 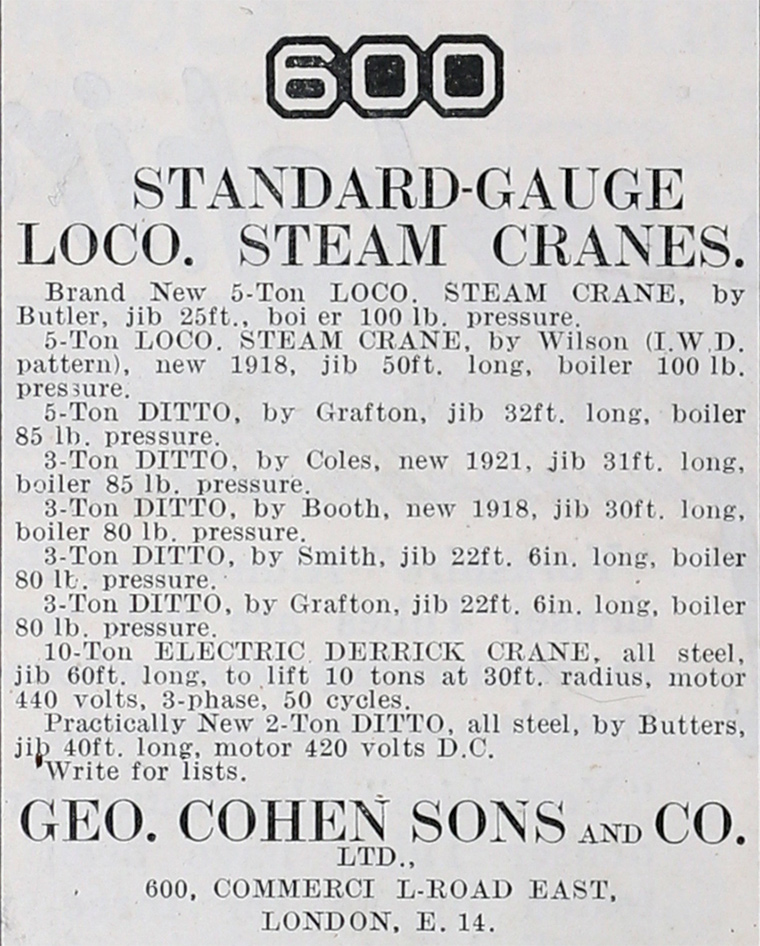 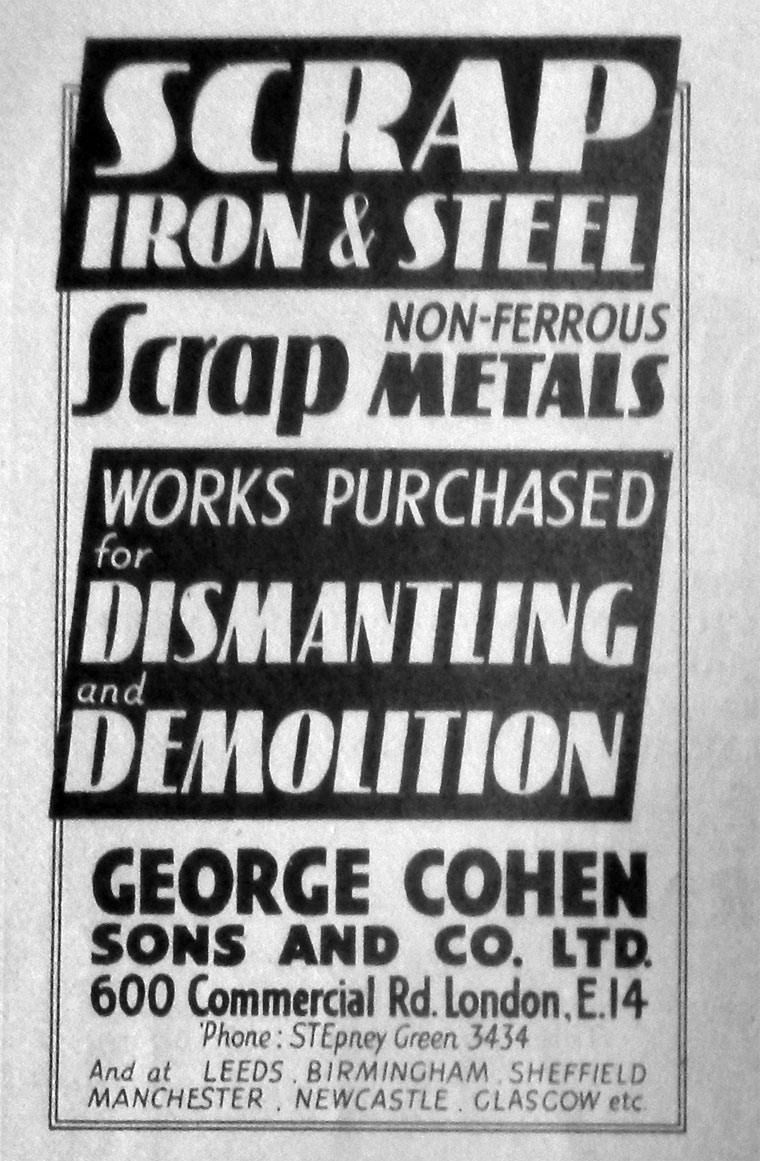 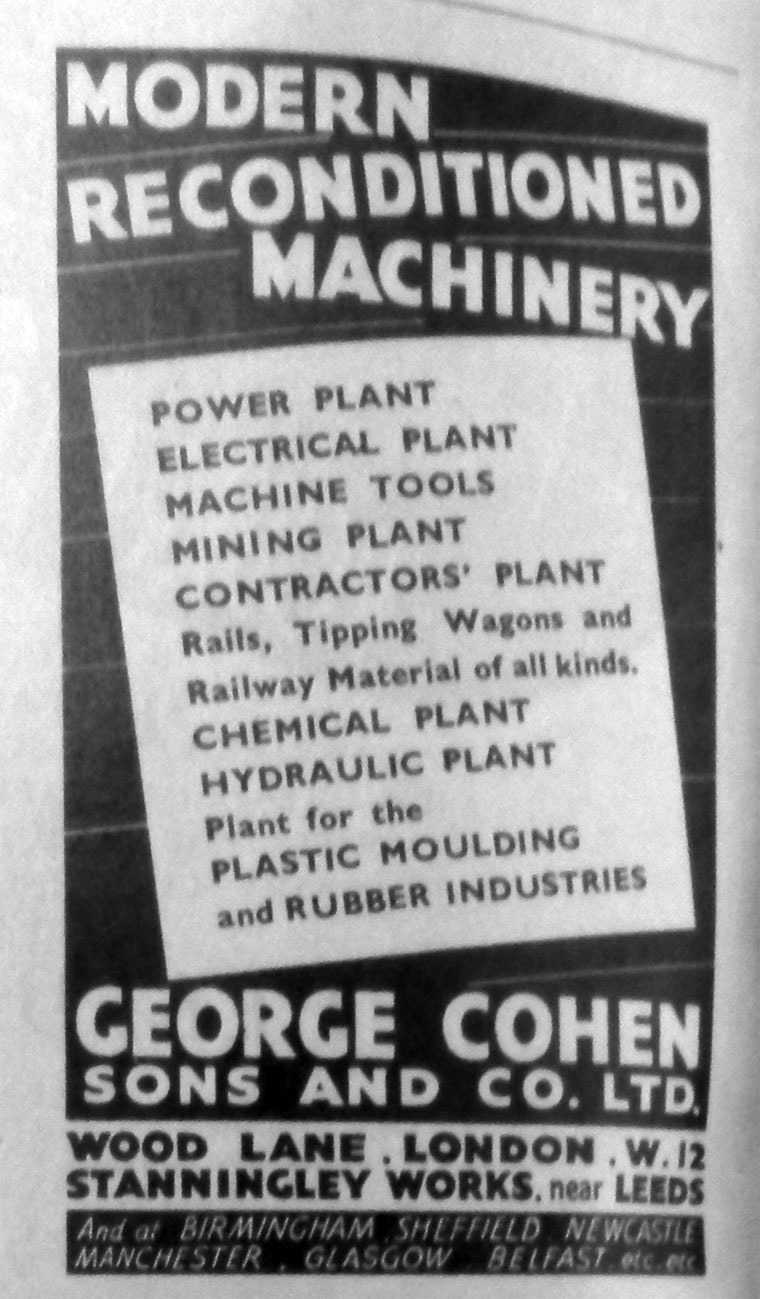 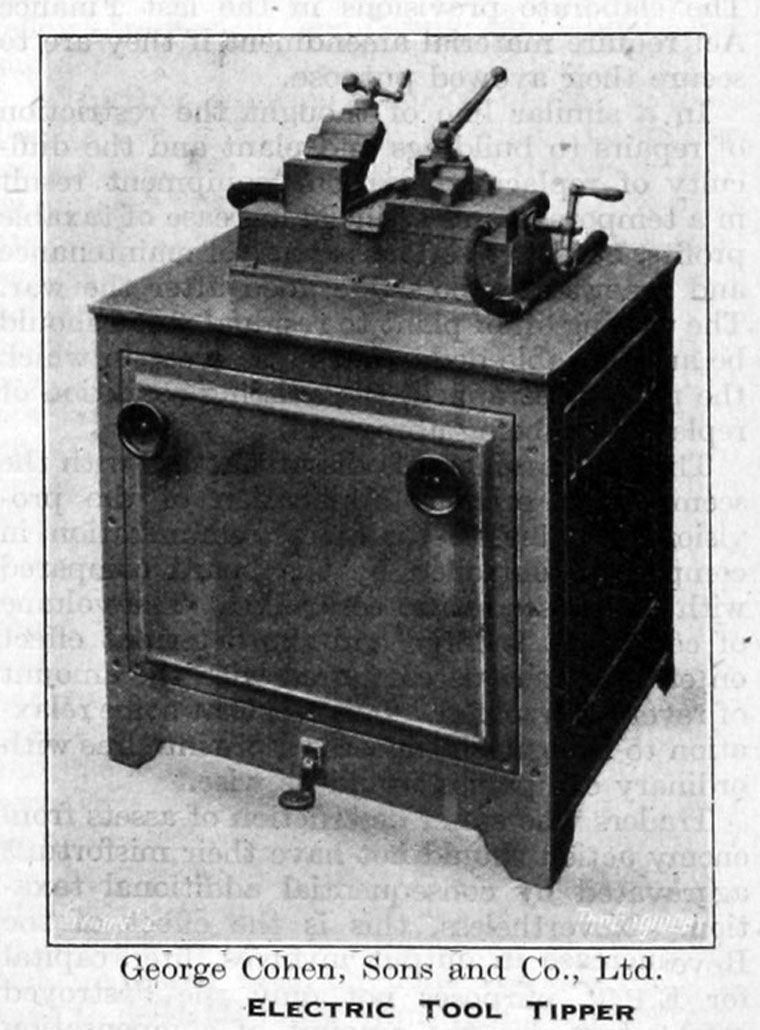 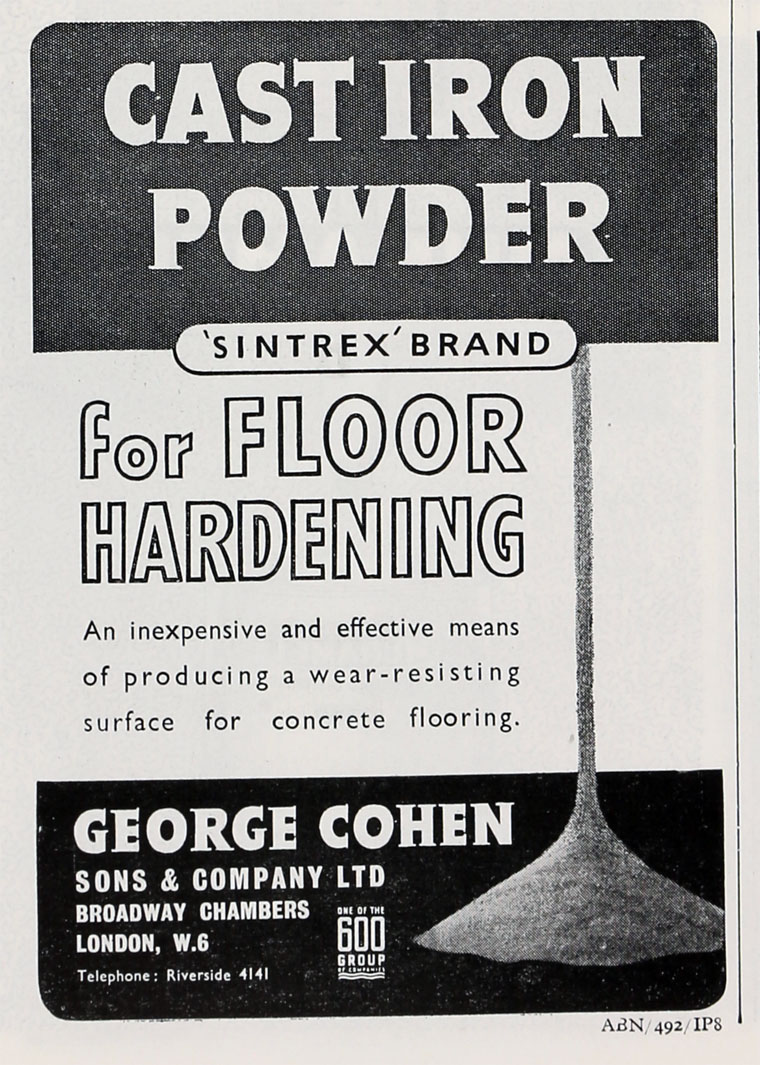 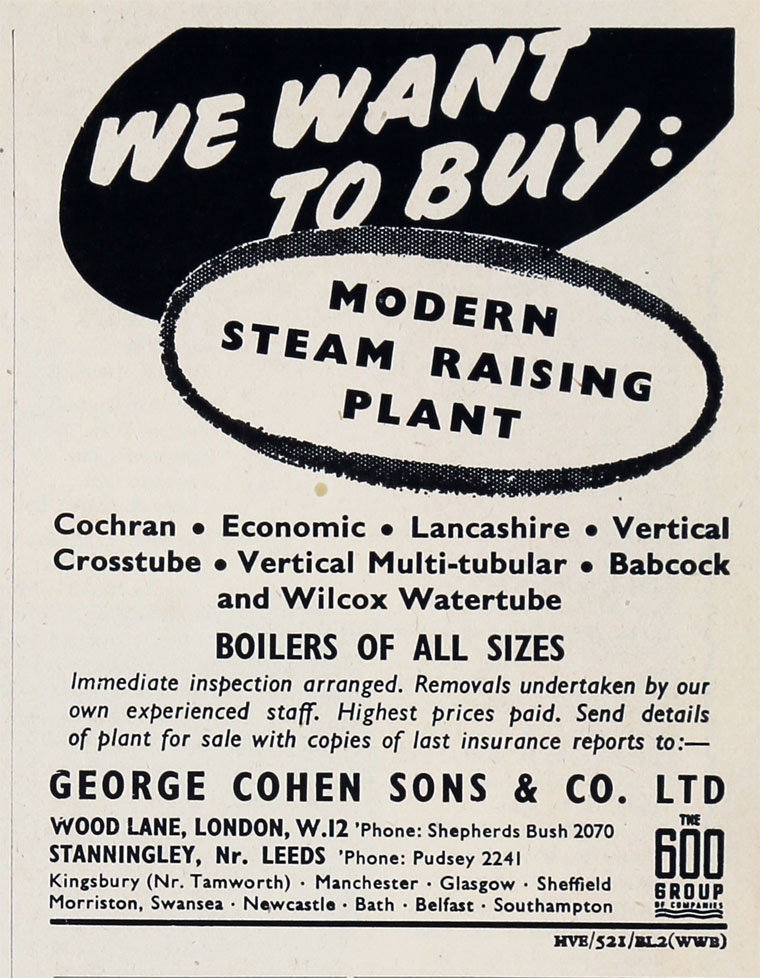 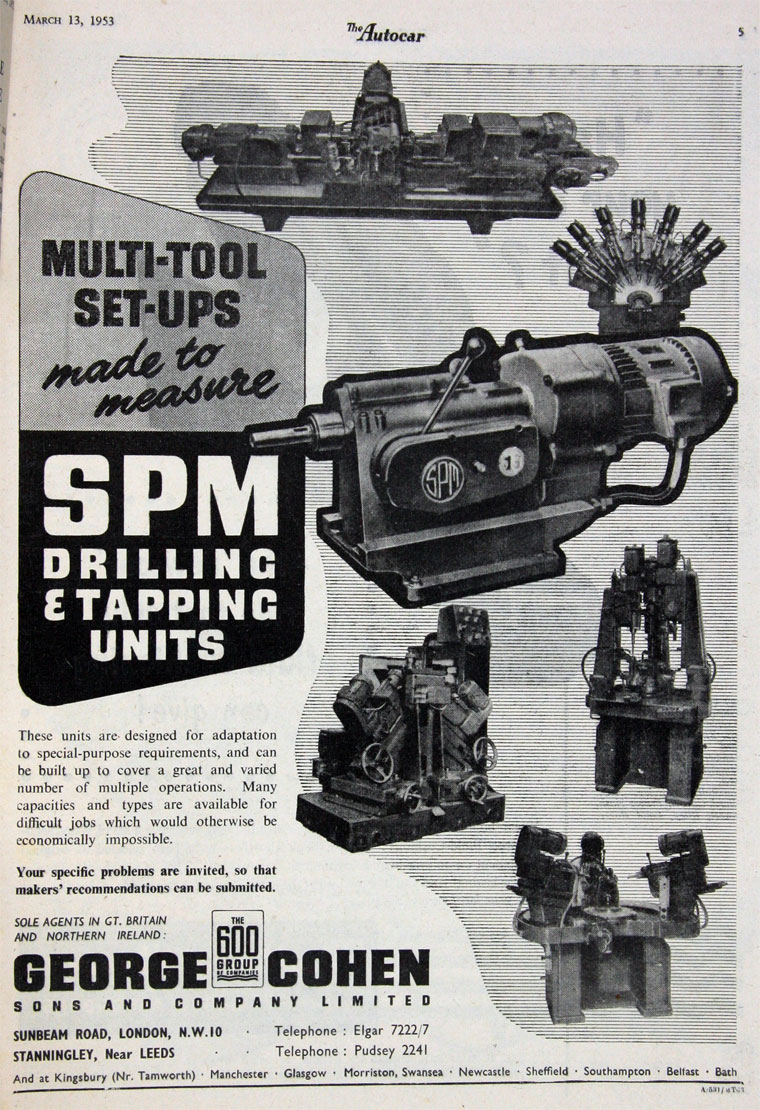 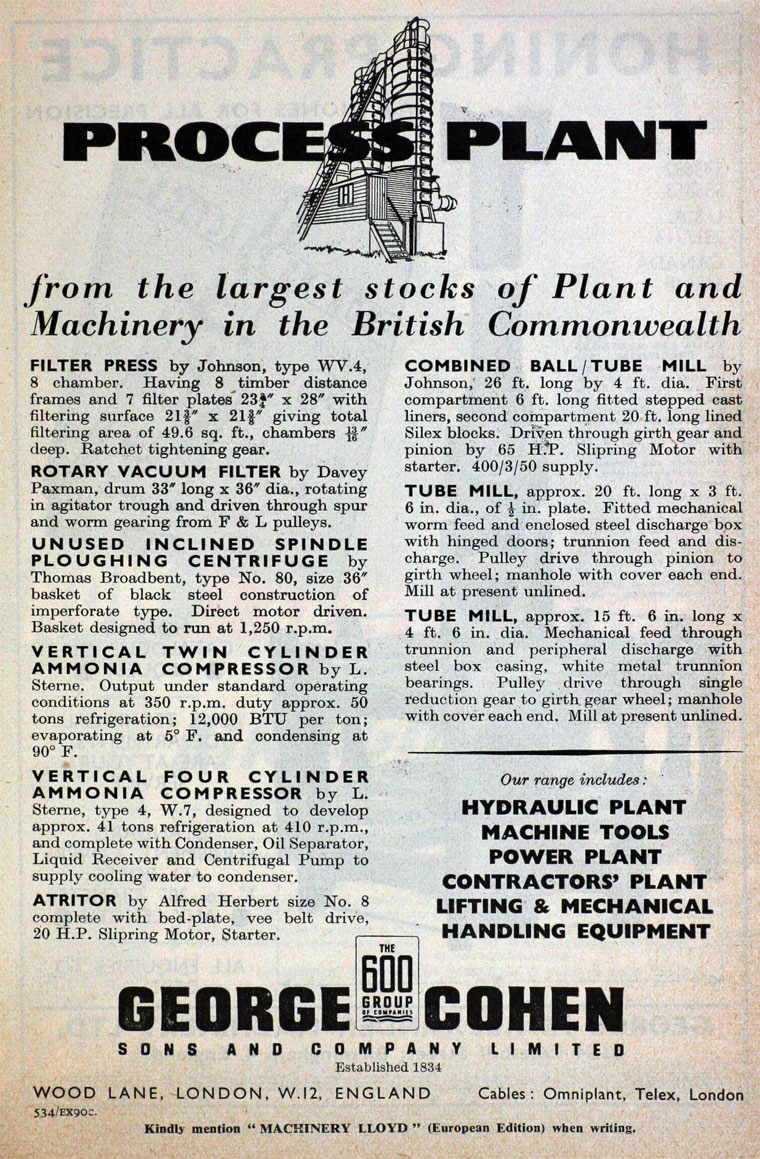 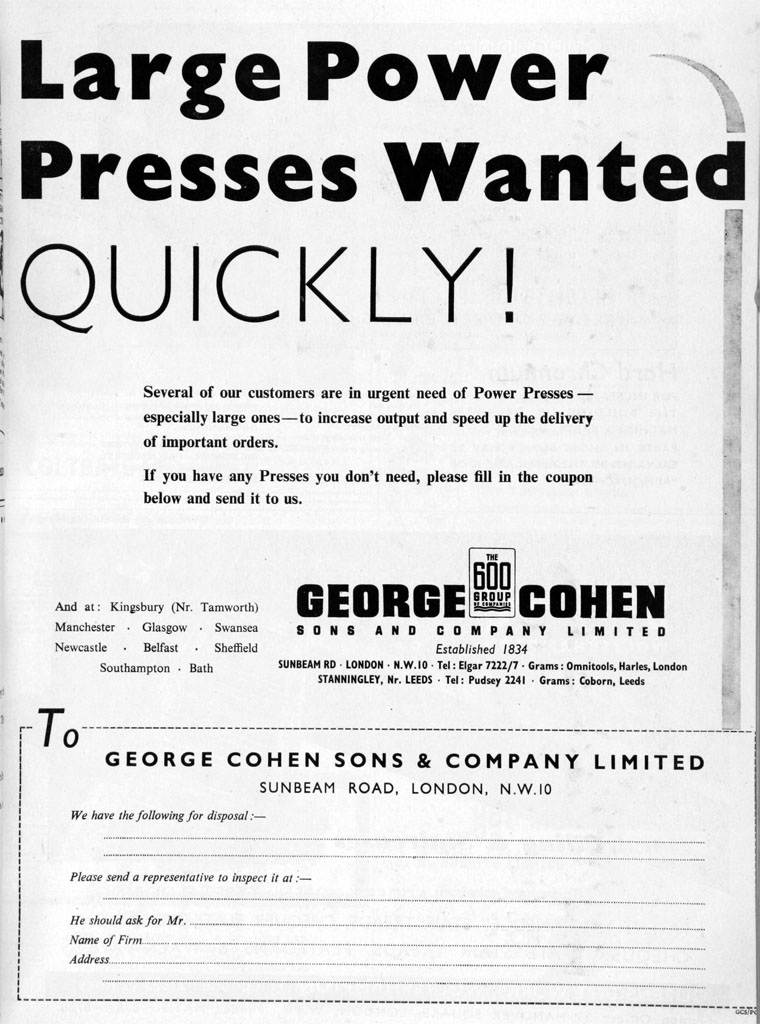 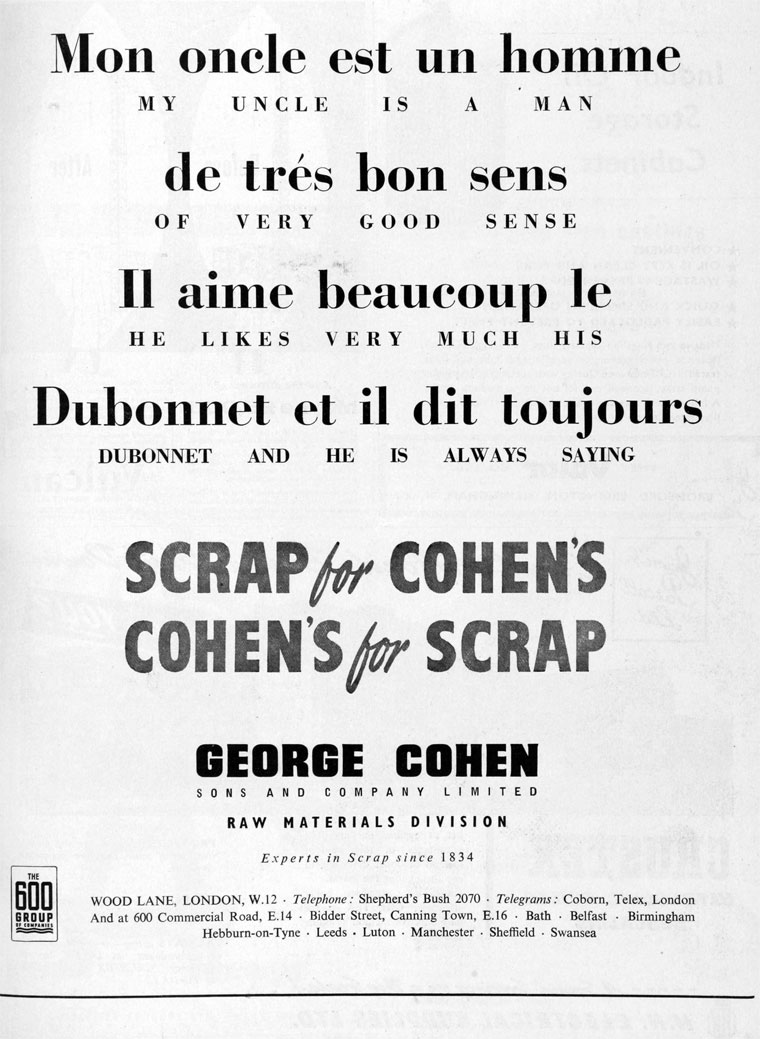 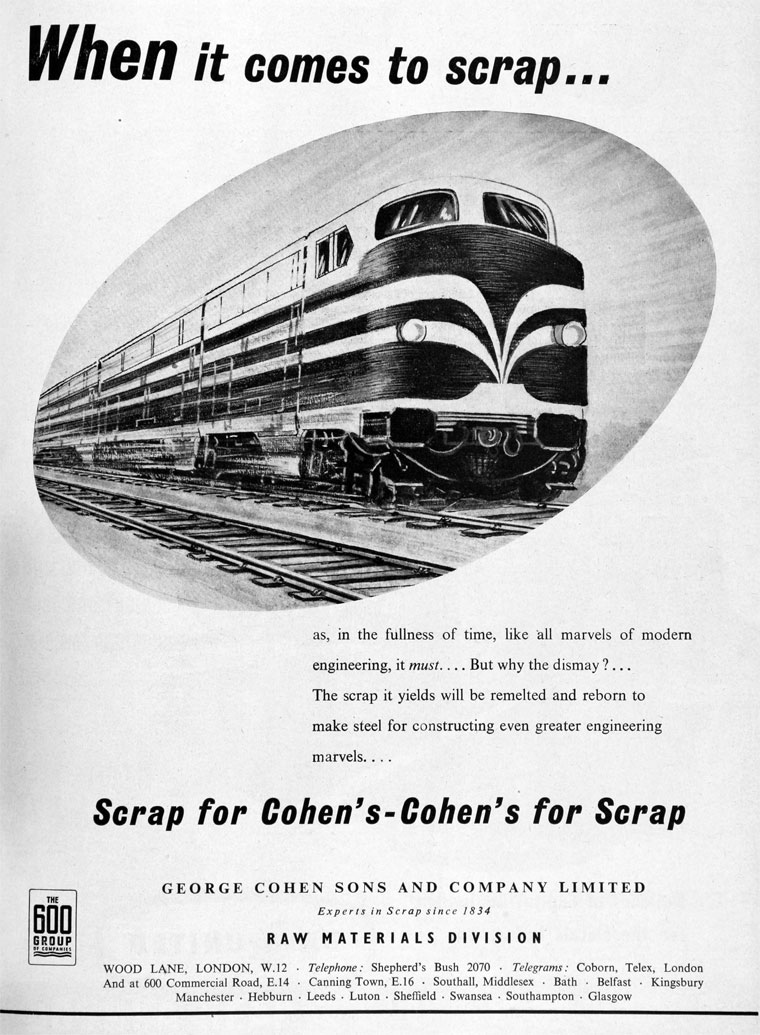 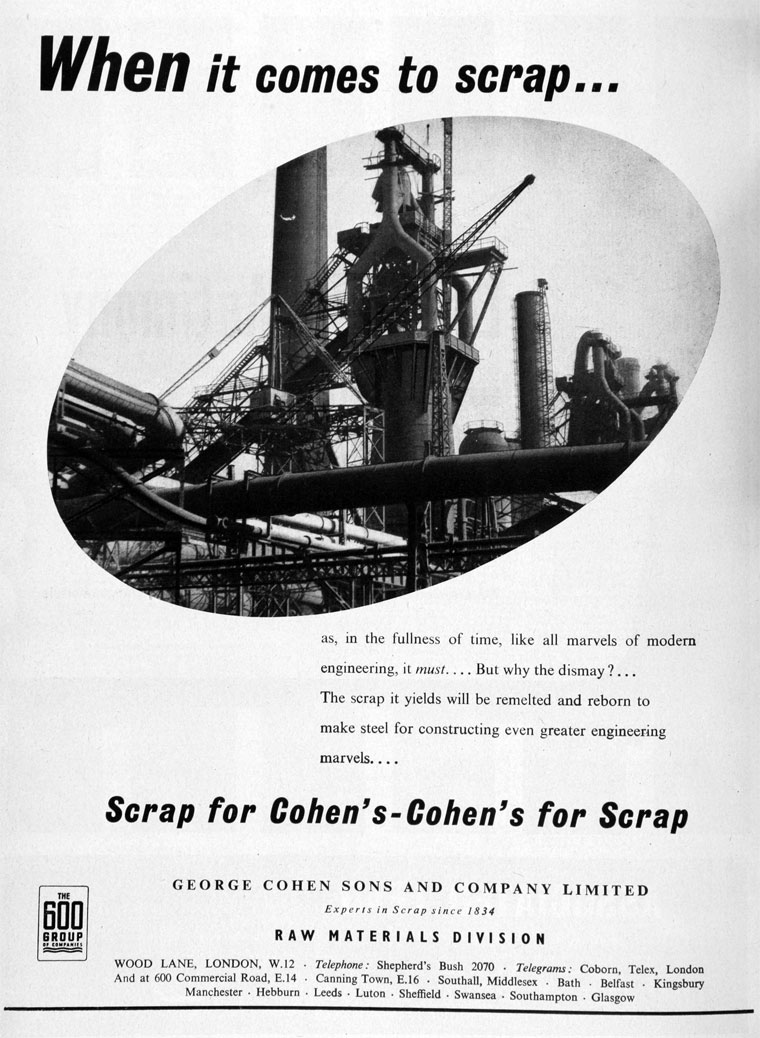 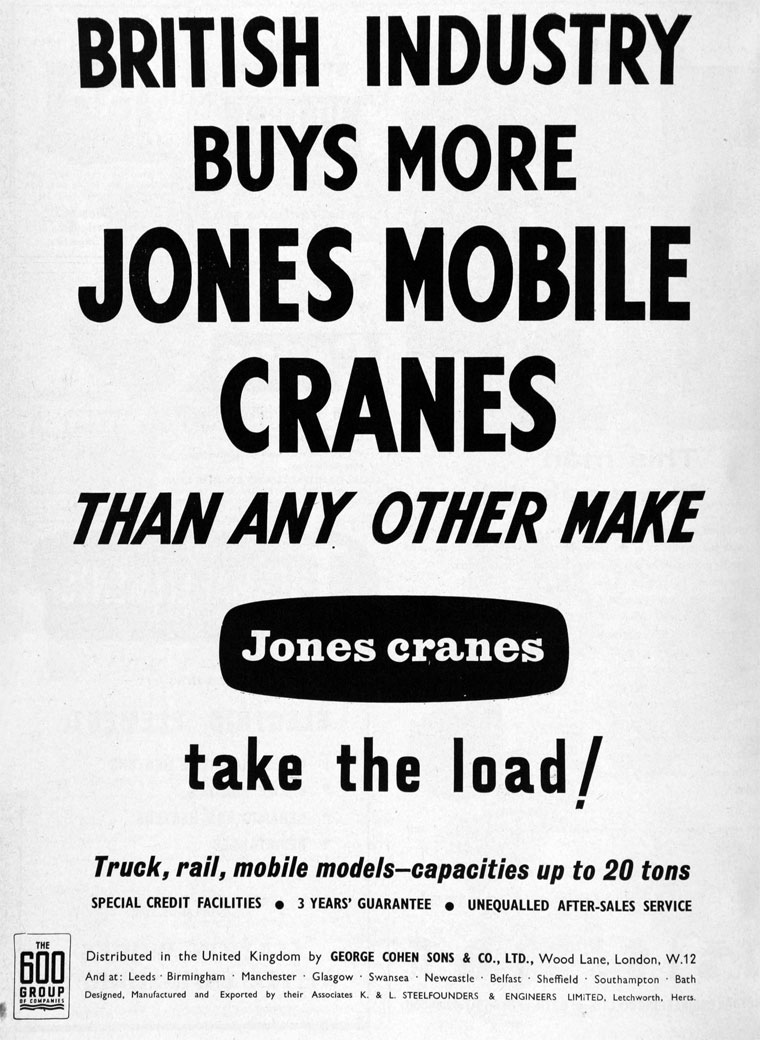 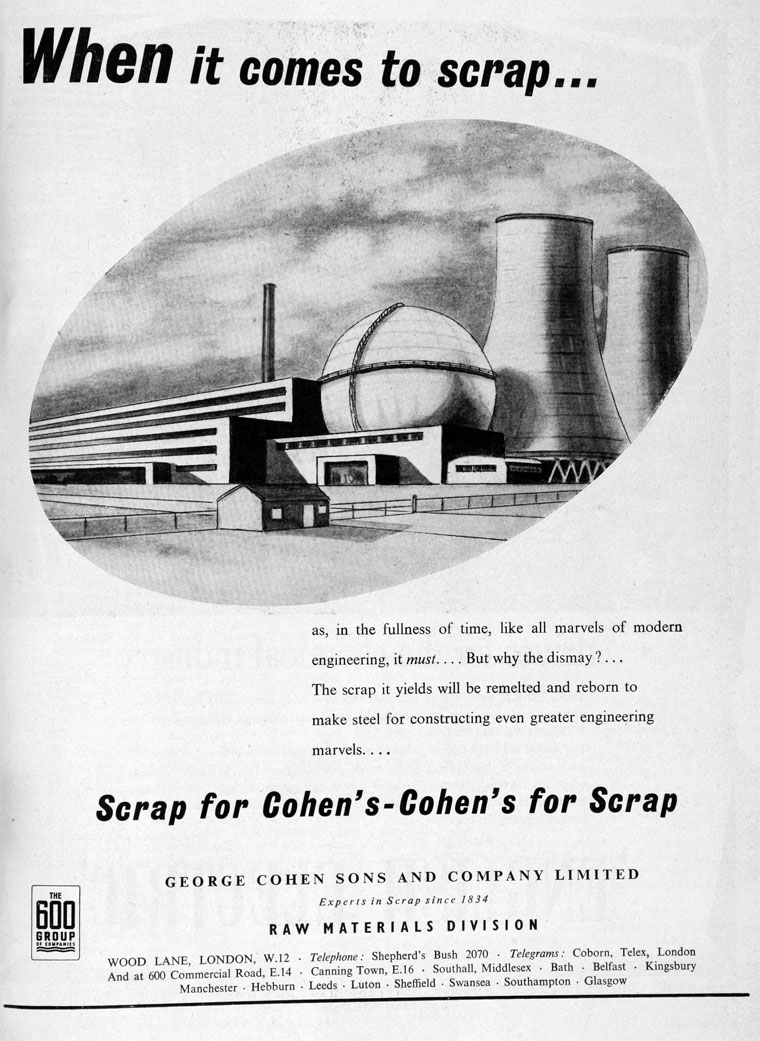 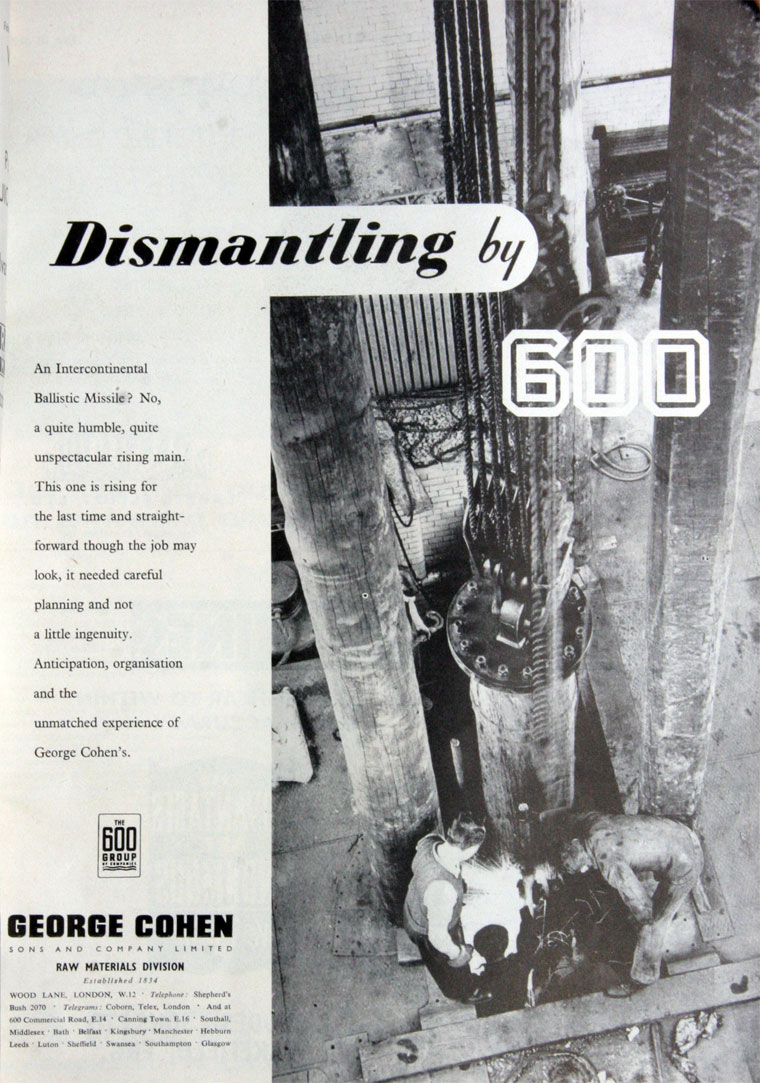 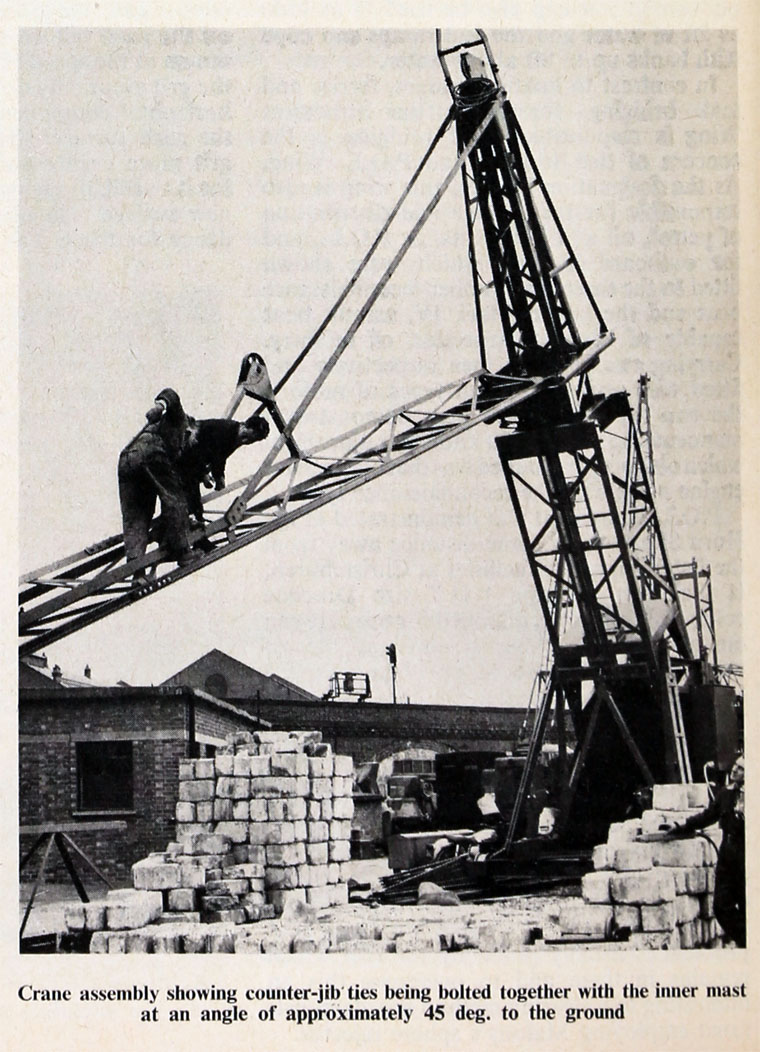 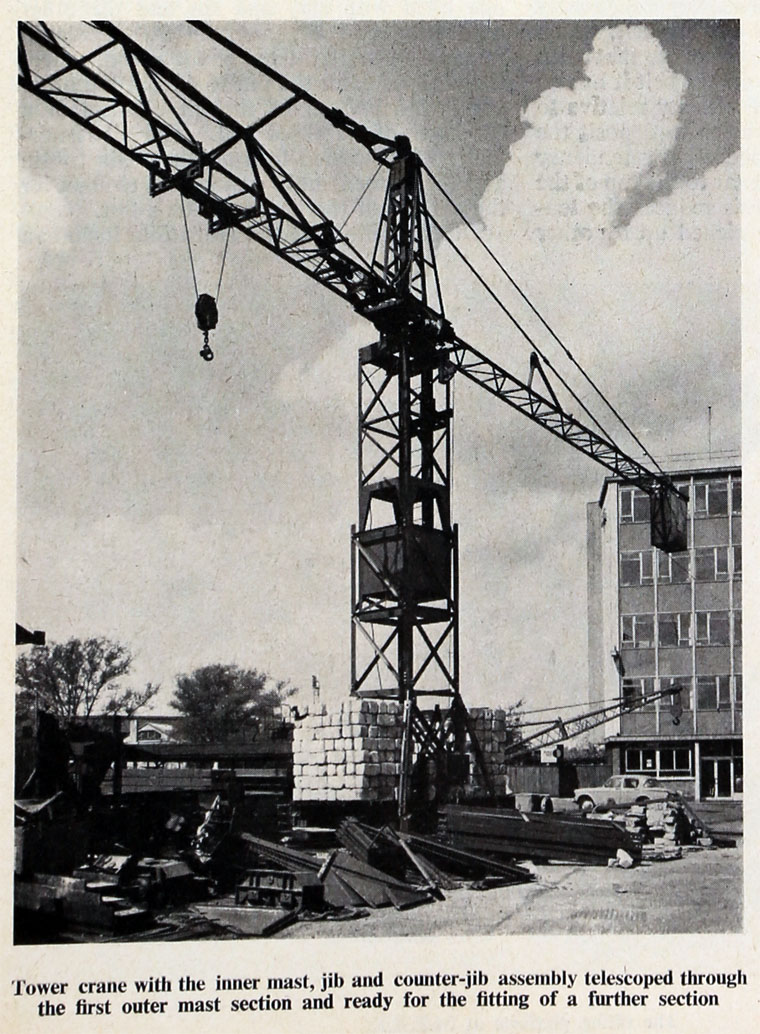 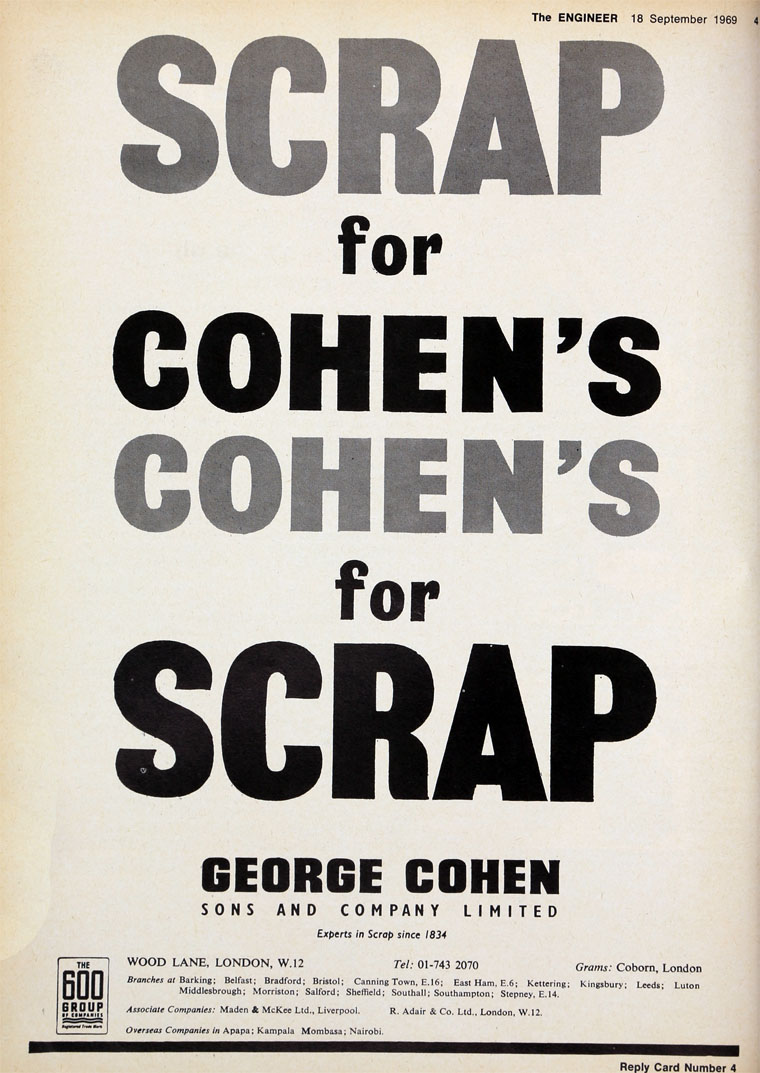 Post WWI: Administrators of a contract for breaking down ammunition let by the Government and involving several large factories.

1947 Generally known as the "600 Group" from the former address of its headquarters in London. Employed 6000 persons. Issue of shares to fund expansion of its subsidiary companies; the principal companies in the Group were[2]:

1952 Sold Browett Lindley Ltd to Alley and MacLellan in order to free up capacity at Letchworth for crane manufacture[3]. Acquired 51 percent of F. Burnerd and Co, maker of chucks; Colchester Lathe Co acquired 29 percent; invested in the company to expand the range of its products; in addition to the above companies, also owned Western Metallurgical Industries[4]

"ONE HUNDRED YEARS." - Under the title "One Hundred Years," George Cohen, Sons and Co., Ltd., have just issued a very handsomely produced and copiously illustrated centenary volume. The firm was established in a very humble way in Goulston-street, a turning off Aldgate, in 1834, and its trade appears to have consisted in the purchase and sale of cast and wrought iron scrap. Of steel scrap in those early days there was little or none. The founder was bucolic in appearance, and was known amongst his friends as Farmer George. "He was a cheerful, kindly, big-hearted man, and everywhere made friends who held him in affectionate regard," and "it is scarcely an exaggeration to say that he was adored by his workmen." The firm progressed slowly in the face of grave difficulties, but in 1869 the original premises were found to be too small. In that year a large depot with offices in Cable street, St. Georges, was rented. A little later another depot was opened in Canning Town, and the firm began to trade in machinery as well as scrap. By 1876 further development was necessary, and a move was made from Cable-street to 600 Commercial-road, where the head offices of the company still exist. In 1890 the founder died, and Lewis Levy, one of his sons-in-law, took command. To him is due the development of the ship-breaking business. He died in 1913, and was succeeded by his son, Lawrence, who is the present chairman. Under him the company has greatly extended its interests, and now has a controlling interest in many other companies, all of which hold important positions in the engineering industries. To each of these associated companies some pages of the volume are devoted. A notable feature of the book is the attention which is paid to the staff and personnel of the head and other companies.