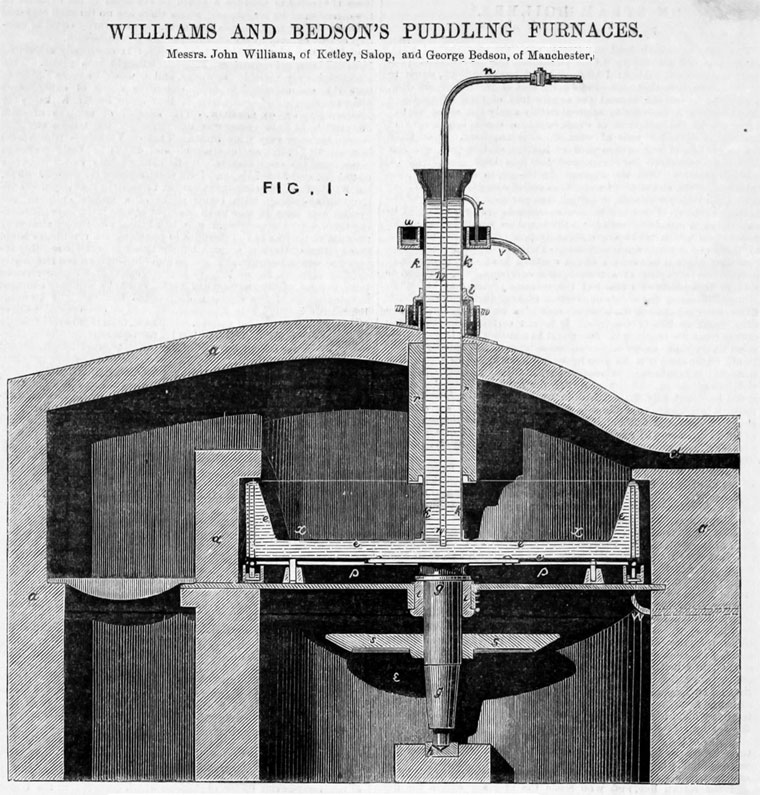 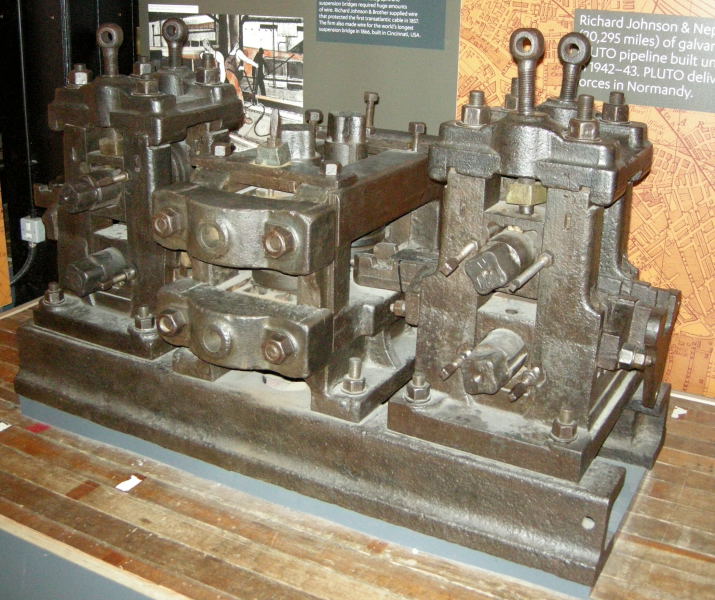 Part of Bedson's continuous rolling mill, 1872, on display at MoSI

George Bedson was born in Sutton, Warwickshire, in November 1820. He worked for James Edleston in Warrington, before moving to work for Richard and William Johnson in Manchester. He became the technical manager of their Bradford (Manchester) works, and invented a number of processes, his most far-reaching development being the continuous rolling mill (1862). Bedson was offered a partnership with Richard Johnson and Brother, but he declined[1]

George Bedson's first continuous rolling mill was put into service in 1862/3, at the Adelphi Salford, and after successful trials was moved to the Bradford Ironworks[2]. One source[3] states that once the patents were secured, Bedson had the mill erected in an old silk mill in the Adelphi, Salford. It may be that the premises were the former Adelphi Silk Dyeworks, previously occupied by Thomas Bury and advertised for sale in 1858.

His second, a sixteen stand mill, was installed in 1872(see below) at Richard Johnson and Nephew's works; part of this mills is displayed at Manchester's Museum of Science and Industry (see photo).

Note: Joseph Phillips Bedson wrote in 1917 that the second continuous mill was built in 1866, and was still running, and a duplicate was supplied to Washburn and Moen of Worcester, Mass., in 1867, where it came under the superintendence of Charles Hill Morgan, who went on to develop continuous rolling on a very large scale.[4]

Bedson's invention of the principles of continuous rolling of metals, initially applied to rolling wire-rod, was taken up in the USA where continuous-type rolling mills were developed[5].

GEORGE BEDSON, who died on the 12th of December 1884, was manager of the firm of Messrs. Richard Johnson & Nephew, of Manchester.

He was born at Sutton-Coldfield, in Warwickshire, on the 3d November 1820, so that he was in the sixty-fifth year of his age. Its 1839, after having acquired a considerable knowledge of the wire trade at works carried on by his father, Mr. Bedson took a position at the wireworks of the late Mr. James Edleston, in Warrington, and thence he proceeded in 1851 to Manchester to act as manager of the works of Messrs. Richard Johnson & Brother, afterwards Messrs. Richard Johnson & Nephew, where he remained for the rest of his life.

While he was at Manchester, Mr. Bedson initiated a number of important improvements in the wire manufacture, including a system of circulating puddling furnace water bottoms and sides, and a galvanising process which is now very generally adopted in wire-mills. His system of continuous rolling of wire rods is another of the most valuable improvements in the history of the wire trade, and one that is still carried on in Manchester and elsewhere. By this invention the billets can be rolled without welds into rods weighing, if need be, half a ton. Mr. Preece, electrician to the Post-Office, has stated how much telegraph engineers were indebted for this and other improvements to Mr. Bedson. The latter gentleman was also the author of a method of mechanical puddling, which, however, is not now carried on, and it is claimed for him that upwards of twenty years ago he propounded to the late Sir William Fairbairn the theory of continuous brakes for railway trains, a system which Westinghouse and others afterwards perfected, and which is now in general use. One who knew Mr. Bedson well has remarked of him that he possessed a large amount of sagacity and common sense.

Mr. Bedson was elected a member of the Iron and Steel Institute in 1869, but never took any prominent part in its proceedings.