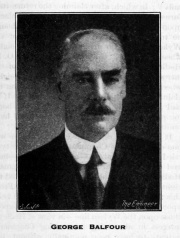 GEORGE BALFOUR, M.P., was one of the most outstanding figures in the electrical supply industry of Great Britain in the present century. Moreover, he was equally well known for the important civil and electrical engineering contracts carried out under his responsibility, by the firm associated with his name. He had great administrative gifts and a wealth of technical and business experience which made his speeches in Parliament of particular value from the engineering viewpoint.

He was born at Portsmouth in 1872 and received his technical education at Portsmouth Technical Institute and later at the University College, Dundee, and in 1888 he began a five years' apprenticeship with Messrs. Urquhart, Lindsay and Company, of Dundee, with whom he remained until 1894. He then joined Messrs. James Maxwell and Sons, and subsequently Messrs. Lowden Brothers and Company, Ltd., both being electrical contractors' firms in Dundee. He was also for a short period an assistant engineer in the electric lighting department of the Corporation of Edinburgh, but later returned to Messrs. Lowden, of which firm he became manager of works and later a director.

At that time Mr. Balfour's chief activities were the planning and construction of municipal tramways and light railway systems, and on leaving Dundee for London in 1903 he joined Messrs. J. G. White and Company, the British branch of the J. G. White Corporation (New York), a firm engaged upon similar work. He remained with Messrs. White for six years, as commercial engineer, during which time he transformed several unsatisfactory schemes into prosperous commercial undertakings. In 1909 he established the London firm of Balfour, Beatty and Company, Ltd., with the main object of carrying out the construction of electric supply and allied undertakings. The company secured several important contracts, the most notable of which was the Lochaber hydro-electric power scheme involving the cutting of a 15-mile tunnel, passing under Ben Nevis, from Loch Treig.

In addition to this great engineering feat, the firm had several remarkable works abroad to its credit; in Iraq, the Kut barrage was constructed between 1934 and 1938 and the Habbiniyah scheme was commenced shortly before the present war. Side by side with all this constructional work, Mr. Balfour continued to give much attention to the financial and commercial development of electrical undertakings; he was responsible for the amalgamation which resulted in the Scottish Power Company which undertook the design and construction of the works in connection with the Grampian hydroelectric undertaking. In 1912 he combined a large number of important properties to form what is now the Midland Counties Electric Supply Company, Ltd. In addition he was chairman of the London Power Company. He also became a director and later chairman of the Metropolitan Supply Company, Ltd., and was associated with the Llanelly and District Electrical Supply Company.

The Power Securities Corporation, formed in 1922, acquired the interests of Balfour, Beatty and Company, Mr. Balfour becoming chairman of the new company. Abroad, Mr. Balfour interested himself in the commercial side of a number of electric power undertakings, many of which owe much to his recommendations on reorganization and financial policy. In addition to these many great responsibilities, it is remarkable to note that Mr. Balfour took up parliamentary work. He stood as a candidate for the Govan Division in 1910 and 1911 and in 1918 he was successful as Unionist candidate for Hampstead, a constituency which he represented for the rest of his life. He also served, at Lord Reith's invitation, as chairman of a committee appointed to investigate the cement industry.

The firm of Balfour, Beatty & Co. Ltd., which, in conjunction with the late Mr. A. H. Beatty, he founded in 1909, and of which he was the active Chairman until his death, carried out many important engineering contracts under his leadership, including the Lochaber water-power scheme, carried out for the British Aluminium Company; the Grampian Electricity Supply Company’s hydro-electric development; and the construction of the Kut barrage on the Euphrates for the Iraq Government.

In 1922, Power Securities Corporation was founded to finance electricity development and general engineering enterprises all over the world. Balfour, Beatty & Co. Ltd., became a wholly-owned subsidiary of that Corporation, of which Mr. Balfour was Chairman until his death....[more]

"...George Balfour, which took place in London on Friday, September 26th, at the age of sixty-nine, the British electric supply industry and the allied business of civil and electrical engineering contracting has lost a leader who combined in an outstanding degree engineering training and ability with administrative and business experience, and whose loss in these difficult days the nation can ill afford. It was only last week that George..."[More]

He was educated at Mile End Academy, Ports- mouth, and received his technical training at Dundee, where he attended evening classes at the Technical Institute and at University College. From 1888 to 1893 he was apprenticed to Messrs. Urquhart, Lindsay and Co., Dundee, and subsequently obtained electrical experience with Messrs. James Maxwell and Sons of the same city. He then spent a few months at the Dundee works of Messrs. Lowden Brothers and Co., before taking up an appointment as Assistant Engineer to the Edinburgh Corporation. He returned to Messrs. Lowden at the end of 1895 as Works Manager, and in 1899 became a partner in the firm.

In 1903 he moved to London as Commercial Engineer to J. G. White and Co., and during the early years of the present century was responsible for the construction of electric tramways at Southend, Shipley, Ayr and Dundee, and for installing a number of municipal electric lighting plants. He founded in 1909 the firm of Balfour, Beatty and Co., general electrical engineers and contractors, and remained its Chairman until his death. The firm has carried out many important engineering projects, including the Grampians power schemes and the Kut barrage, in Iraq. Mr. Balfour was Chairman of numerous electrical undertakings, including the Power Securities Corporation, the Lancashire Electric Light and Power Co., the London Power Co., the Metropolitan Electric Supply Co., the Midland Counties Electric Supply Co., the Perak River Hydro-Electric Power Co. and the Scottish Power Co. He had been M.P. for Hampstead since 1918, and in January, 1941, was appointed as Chairman of the Committee on Cement Production which was set up by the Minister of Works and Buildings.

Joining The Institution in 1898 as an Associate, he was elected a Member in 1904.