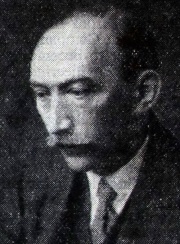 "IT is with deep regret that we have to record the sudden death, on Thursday, October 6th, at 70, Castleton Avenue, Wembley, Middlesex, of Dr. Ing Georg Schlesinger, in his seventy-sixth year.

Dr. Schlesinger will be remembered for many long years ahead both in England and in Germany for his work, for the machine-tool industry. He was born in Berlin in 1874 and received his education at the Falk Real Gymnasium, Berlin. He studied for his Dr.-Ing degree at the 'Technical University of Cbarlottenburg, and spent two years, 1891 to 1892 and 1894 to 1895, as an engineering apprentice.

In 1897 he joined the firm of Ludwig Loewe Gesfurel and Co., of Berlin. Already he was beginning to show an interest in his chosen field. For he was appointed a junior designer of machine tools. Subsequently he became assistant works director and later chief designer to the firm. In 1903 be presented a Thesis on " Fits and Tolerances " and gained his Dr. Ing Degree. About that time, too, he began to give lectures in the university on interchangeable manufacturing methods. He was appointed Ordinary Professor at the Technical University of Charlottenburg in 1904...Read more

From the time he left the Technical University, Berlin-Charlottenburg, until his death, his life was devoted to the study of the engineering aspects of production efficiency, with a concentration on the various problems involved and a logical development of them rarely found in a single person.

The thesis "Limits and Fits in Machine Construction" for which he was awarded the degree of Dr. Ing. laid the foundation for the introduction of tolerance systems on the Continent. His book "Testing Machine Tools" (translated from German into English, French, Italian, Spanish, Russian, and Japanese) is used by machine tool manufacturers all over the world, and a further work "Machine Tools", published in Germany, has become one of the classics on machine-tool design. His latest book, "The Factory", recently published in England, sums up his experiences in organizing more than fifty factories and his views on production engineering and scientific factory management, which thousands of engineers and students have learned from his lectures at universities and technical institutions.

His work on metal cutting and on machine tools covered research on cutting tools ranging from turning, drilling, and milling, to broaching, tapping, and forging operations, and has been published in numerous papers and articles in England, the United States, Germany, Switzerland, France, and Italy. His fundamental papers on "The Forces in the Machine Tool" (V.D.I.), "Machine Tool Tests and Alignments", and "Surface Finish and the Function of Parts" (I.Mech.E.) were instrumental in starting new lines of development in machine tool design and production engineering.

After having been in charge of design and production at the machine tool works of Ludw. Loewe, Berlin, at the age of thirty he was called to occupy the newly created Chair of Machine Tool Research and Design and Production Engineering at the Technical University, Berlin-Charlottenburg, holding this until he was forced by the Nazi regime to leave Germany in 1934. After short periods of teaching and research work at the Universities of Zurich and Brussels, he came to England in 1939 to take charge of the newly established Research Department of the Institution of Production Engineers. After his retirement in 1944 he continued in practice as a consulting engineer.

His energy and working capacity seemed unlimited: his assistants and collaborators often felt the strain whilst he was carrying on without any sign of fatigue. His colleagues felt the impact of his personality, whether they agreed or disagreed with him in office or workshop, or at a meeting, but his greatest influence was perhaps exerted upon students who, for almost forty years, listened to his teaching and carried away with them a fundamental knowledge and scientific approach to practical problems which enabled many of them to build up distinguished careers in science and industry all over the world.

A man whose energetic fighting spirit never faltered in technical discussions, Schlesinger found almost unbelievable pleasure in the company of friends and, in particular, of children, who were even allowed to interrupt his work without being reproached. All through his life, however, the focus of his interest was the scientific approach to engineering production, and it is perhaps significant that his life's work which started with the study of selective interchangeability in assembly (limits and fits) concluded with the completion on the day of his death of the manuscript for his book on Surface Technology, whose aim is non-selective interchangeability in production.