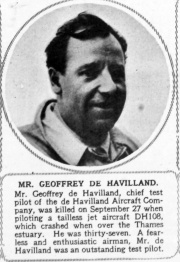 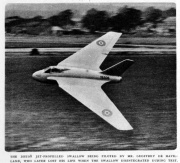 1946 September. Died. 'Four or five fragments of the DH 108 Swallow tail-less jet plane in which Mr Geoffrey De Havilland, ace test pilot, was killed when the machine exploded in mid-air over the Thames Estuary last night were found to-day. The pieces were less than a mile off shore at Egypt Bay. The largest piece was about four feet long and had what appeared to be a portion the jet turbine attached to it. Other wreckage further out was unreachable from the shore and was inspected by launch party. The search had been going on from dawn by air, sea and land. Mr Havilland was on his final test flight before attacking the world air speed record on the Littlehampton course. A Ministry of Supply spokesman said that in view of the accident there would be no further bid this year. A Mosquito taking part in the search this morning skimmed for hours over the mud flats at a height of less than 20 feet. A Naval party approached by boat from the Essex side and went ashore on the semi-solid islands of mud. Heavy Mist. "Lookers," the local term for marsh shepherds, and police assembled for their search at 5 a.m. At first it was a yard-by-yard search in the heavy mist, but gradually this lifted. A National Loss. The Minister of Supply, John Wilmot, has sent the following telegram Sir Geoffrey De Havilland, father of the pilot:— It with the deepest regret that I have heard of the tragic death of Geoffrey De Havilland just at the moment when he had every hope of winning the speed record with the D.H. 108. In his courageous and most thorough flight testing and demonstration with the Mosquito and the Vampire he had already given very great service to aviation, and in offering my sincerest condolences to you and your company I feel that have suffered a national loss.'[1]

1946 October. His body found. 'The body of man, unclothed except for a necktie, washed up yesterday at Whitstable, Kent, was last night identified as that of Mr. Geoffrey de Havilland, chief test pilot of the de Havilland Aircraft Company, who was killed on September when his jet-propelled high-speed research plane, the DH 108, was wrecked while on a practice flight. The distance from Egypt Bay, near Allhallows-on-Sea, where the plane crashed, to where the body was recovered, about 16 miles. Mr. de Havilland had head injuries and a broken right arm and leg. The inquest is expected to be held, on Thursday. It was announced yesterday that Mr. John Cunningham, chief test pilot of the de Havilland Engine Co., Ltd., a night-fighter ace of the war, who holds the D.S.O. and two bars and, the D.F.C. and bar, had been appointed to succeed Mr. de Havilland. Sir Geoffrey de Havilland, technical director of the firm and father of the dead pilot, said in a statement earlier yesterday that the de Havilland aircraft and engine companies intended to continue with full effort their research work on the problems and possibilities of the swept-back wing for high-speed flight, which they were carrying on at the time of the crash. It was clear, he added, after a complete inspection, that the engine was not responsible for the accident and reports that it blew up could be denied. '[2]