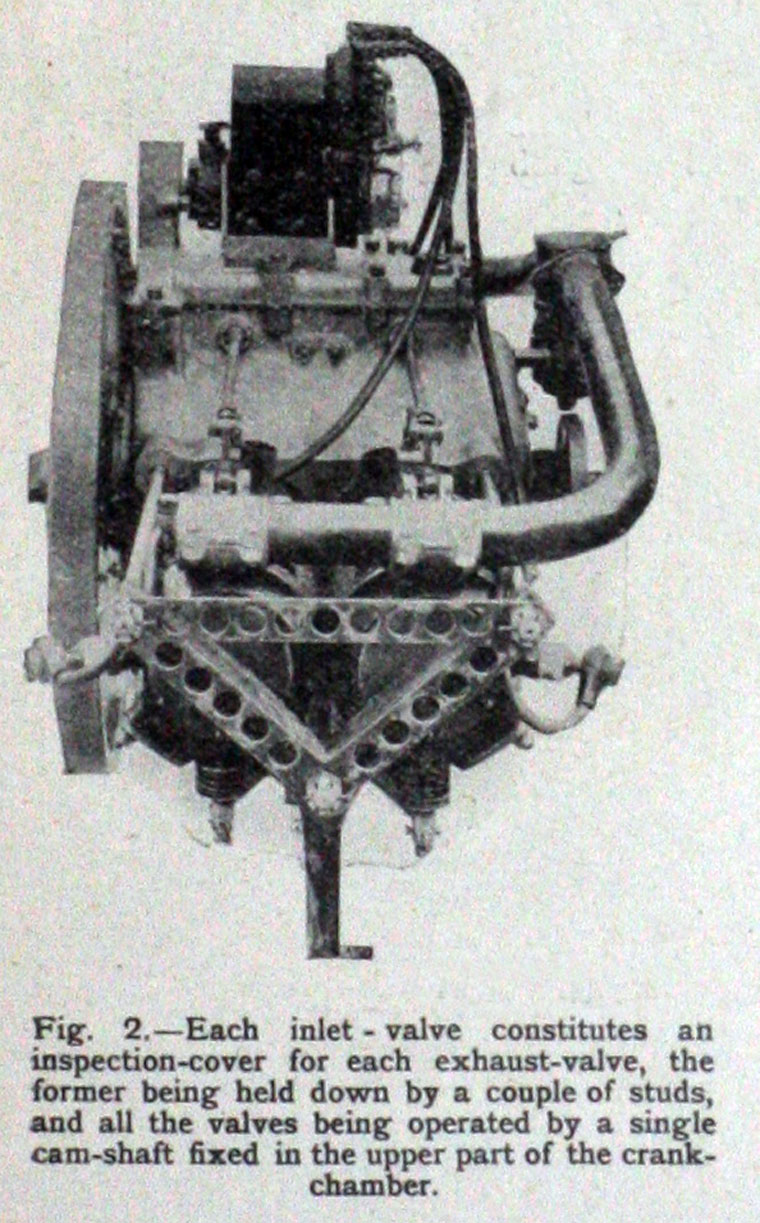 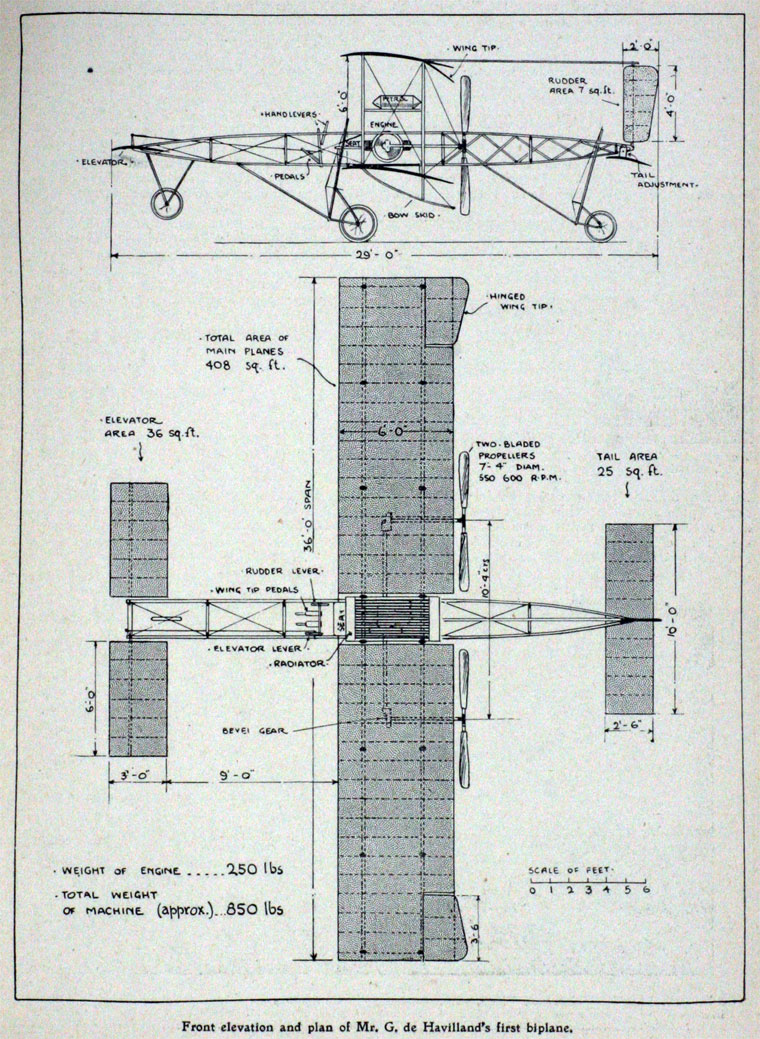 Captain Sir Geoffrey de Havilland, OM, CBE, AFC, RDI, FRAeS, (27 July 1882 – 21 May 1965) of De Havilland was a British aviation pioneer and aircraft engineer. His Mosquito has been considered the most versatile war-plane ever built.

After engineering school, his first interest was in automotive engineering, building cars and motorcycles. He took an apprenticeship with engine manufacturers Willans and Robinson of Rugby.

1905 he became a draughtsman at 30s. a week with the Wolseley Tool and Motor Car Co in Birmingham, but, disliking the dull work and harsh management, he resigned after a year.

c.1906 He subsequently spent two years working in the design office of the Vanguard Motor Bus Co at Walthamstow.

1908 Inspired by the aeronautical flights of Wilbur Wright, he borrowed between £500 and £1000 from his maternal grandfather (an Oxford businessman) and designed his own aeroplane and engine.

1909 December. De Havilland's first plane took two years to build but he crashed it during its first very short flight near Litchfield, Hampshire. A memorial today marks the place.

During 1910 he taught himself to fly in a second prototype. His first employee was Frank Trounson Hearle.

1910 September. Successfully flew his new built biplane from a meadow near Newbury

1910 December Appointed designer and test pilot at the H. M. Balloon Factory at Farnborough, which was to become the Royal Aircraft Factory; they bought his biplane and this became the FE1.

1912 Established a new British altitude record of 10,500 feet, in an aircraft of his design.

1914 January. Appointed an inspector of aircraft in the Aeronautical Inspection Directorate.

1914 May. Unhappy leaving design work, he was recruited to become the Chief Designer at Airco, in Hendon. He designed many aircraft for Airco all designated using his initials DH. Large numbers of de Havilland designed aircraft were used during the First World War flown by the Royal Flying Corps and later Royal Air Force.

1920? Airco was bought by BSA but they were only interested in using the company factories for car production.

1920 September 25th. De Havilland raised £20,000, bought the relevant assets he needed and formed the de Havilland Aircraft Company at Stag Lane Aerodrome, Edgware where de Havilland and his company designed and built a large number of aircraft including the Moth family of aircraft.

Post-WWI The Aircraft Manufacturing Company together with Captain De Havilland were awarded £35,000 by the Royal Commission on Awards to Inventors for the D.H. aeroplanes[3]

1933 the company moved to Hatfield Aerodrome, in Hertfordshire. One of his roles was as test pilot for the company's aircraft, in all of which he liked to fly.

The company's planes, particularly the Mosquito played a formidable role in World War II and de Havilland was knighted in 1944.

He controlled the company until it merged with Hawker Siddeley Company after crashes of the Comet jet airliner in the mid-1950s.

De Havilland retired from active involvement in his company in 1955, though remaining as president. He continued flying up to the age of seventy.

'Sir Geoffrey De Havilland, O.M., C.B.E., A.F.C., the founder of the de Havilland Aircraft Company, died on May 21 at the age of eighty-two. Thus has aviation lost one of its most distinguished pioneers, one of that select band of men who established British aviation, and whose experience very nearly spanned the length and breadth of man-powered flight itself. Indeed, like Handley Page, he was a link with an age when aeronautics was in its infancy and it was quite creditable to build an aeroplane in one's back garden. De Havilland was one of the few aeronautical engineers to make both airframe and engine of his aircraft. His first such machine was the 'Moth' - perhaps the most famous aircraft he ever built. Over the years it has become a household word; an aircraft to be regarded affectionately by all that took their instruction in it from the mid-1920's onwards. The military counterpart of this aircraft was the 'Tiger Moth' which served as a training ground for many service pupils. Other aircraft were equally famous: the 'Comet', the 'Rapide', and the 'Mosquito'. The latter was one of the most versatile and certainly for a period was the fastest and most maneuverable aircraft in World War II.

He was born in 1882, the son of a clergyman and was educated at St. Edward's College, Oxford. He was twenty-six when, with the help of £1,000 from his grandfather, he set himself to designing aircraft. First he designed the 50 h.p. engine he needed and had it made at a Willesden motor works. The a friend joined him in the making of an aircraft to be driven by two propellers. In 1909 this machine briefly took to the air only to crash. Undaunted, they set their hands to building a more successful and stronger model with which in 1910 de Havilland taught himself to fly. It was subsequently bought by the Government and de Havilland and his colleague were given posts at the Army Balloon factory at Farnborough. Within four years of this he was designing aircraft which were to bear the designation D.H. which was to have such a significance later.

He left Government service early in 1914 to become both chief designer and test pilot of the Aircraft Manufacturing Company at Hendon. Here he designed the D.H.1, a two seat biplane suitable either as a fighter or as a scout. At the beginning of the war he was commissioned in the R.F.C., but it was not long before he was reassigned to the task of designing and test flying aircraft. Thus he built the D.H.2 single seat fighter and later the D.H.4 general purpose biplane.

In 1920, a new stage in de Havilland's experience was reached, for in that year the de Havilland Aircraft Company was formed. The headquarters were at Stag Lane, Edgware, where the de Havilland Engine Company was later to be situated. It was here that the 'Moth' and 'Tiger Moth' had their beginnings. For this aeroplane he had found a promising young engine designer, Major Frank Halford, who was later to be associated with the company when it became to build a new generation of engine - the gas turbine. A variety of civil aircraft followed the 'Moth'; and then in 1934 the company undertook to produce a racing aeroplane for the England to Australia race, call the 'Comet'. It won the race and today can be found in the company's museum at Leavesden. It had applied wooden construction in new ways and when the Second World War began in 1939, it was the inspiration of the 'Mosquito', a type of unarmed fast bomber.

Towards the end of the war, the company applied itself to new horizons; the jet engine, and jet propelled aircraft for both military and civil use. The spearhead for a new era in passenger transport was the 'Comet' civil jet airliner which brought him fame as did the 'Moth' after the First World War. It also brought him sorrow when early 'Comets' suffered (then) mysterious accidents and loss of life. But in 1946, before they happened, he had made his own sacrifice in the cause of flying. His oldest son, himself then a chief test pilot, had been killed in flying an experimental fighter near the speed of sound at a time when little was known of the conditions of trans-sonic flying. He had earlier lost his youngest son in a collision in the air. Well over seventy, he continued with work which by now had been acknowledged at home and abroad. In 1961 his company became part of the Hawker Siddeley Group but he remained associated with its activities. He lived at least to see the evolution of the 121st D.H. model - the 'Trident' - and its acceptance into airline service.'