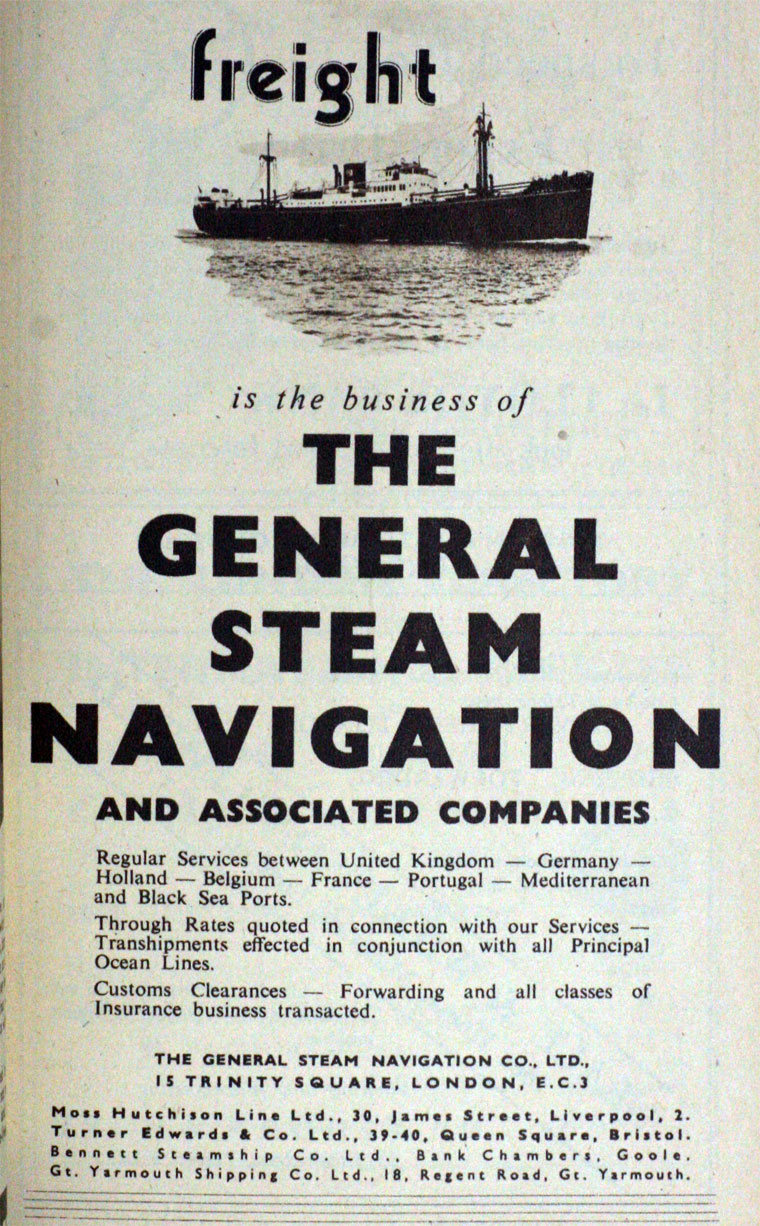 The General Steam Navigation Company was the first shipping company in the world to begin business directly with steamships.

1821 a group of London businessmen including W J Hall, a shipowner, and Thomas Brockelbank, a timber merchant from Deptford, agreed to form a syndicate to develop steamship services. Their first steamer was the James Watt which inaugurated their London to Leith service in 1821. Also running at that time, between London and Margate, was Brockelbank’s own Eagle, the first in a long line of Thames paddle steamers to bear this name.

1824 The company was founded by Edward Banks and William Jolliffe and later on was incorporated by private Acts of Parliament.

By August 1825, possessed a fleet of 15 steamers (built on the banks of Deptford Creek)

1825 The company bought land at the Stowage, Deptford (the old East India Company depot) which was used as a yard for the maintenance and repair of its vessels. The company maintained a small fitting-out yard there until the 1970s.

Joseph Miller designed marine engines which were constructed at Butterley for the Lord Melville and the Royal Sovereign, used by Jolliffe and Banks as the basis for the General Steam Navigation Company.

After a severe struggle, the company succeeded in establishing their pioneering merchant fleet. It was at first confined to the passenger business, most notably the London to Margate service which became immensely popular; for several years the annual number of passengers exceeded a million.

Late 1820s The company moved into the carriage of live cattle and sheep from the Continent, a trade which became the basis for its prosperity in the 19th century.

1836 Acquired the London and Edinburgh Steam Packet Co with 6 steamers and the steamships of a rival Thames company, the Margate Steam Packet Company.

The company specialised in links between London, British ports and north west Europe. It also led the way in providing pleasure cruises between London and resorts lower down the Thames.

William Beardmore (1824-1877) was apprenticed to his father, Joseph Beardmore, who was then and for many years afterwards Chief Engineer at the General Steam Navigation Company’s works at Deptford.

c.1851 After completing his apprenticeship, William was appointed Assistant Superintendent of the works, holding the post for about ten years (until 1861).

1882 Started Mediterranean services which increased into a substantial network of cargo/passenger routes.

1902 Reconstruction took place in connection with a reorganisation and consolidation of the capital, registration under the Companies Act being effected 7 October. [2]

1906 acquired John Crisp and Son which had a shipping service between London and East Anglia and also a river trade using a fleet of Norfolk wherries.

1919 Purchased the Humber-London service of G. R. Haller Ltd and the London-Ghent service of Leach and Co.

1920 Acquired by Peninsular and Oriental Steam Navigation Co. The company was allowed to continue developing its existing business interests.

1923 Great Yarmouth Shipping Co was acquired jointly with T. Small and Co to operate services between London and Great Yarmouth via Lowestoft and Hull.

1931 Took over the Rhine-London Line

1933 Took over the London and Dunkirk Shipping Co.

1934 Acquired the Moss Hutchison Line of Liverpool with its Mediterranean trade after the liquidation of the Royal Mail Lines group of which it was a member.

1939 an interest was purchased in Turner, Edwards and Co of Bristol, which was later taken over.

1966 The excursion steamers were withdrawn at the end of the season.

1967 Normandy Ferries and North Sea Ferries were formed as consortia.

1971 P & O purchased the rest of Coast Lines that it did not own and put it together with long time rival General Steam Navigation Co to become the Short Sea Shipping Division.

1972 Disappeared as an independent company.