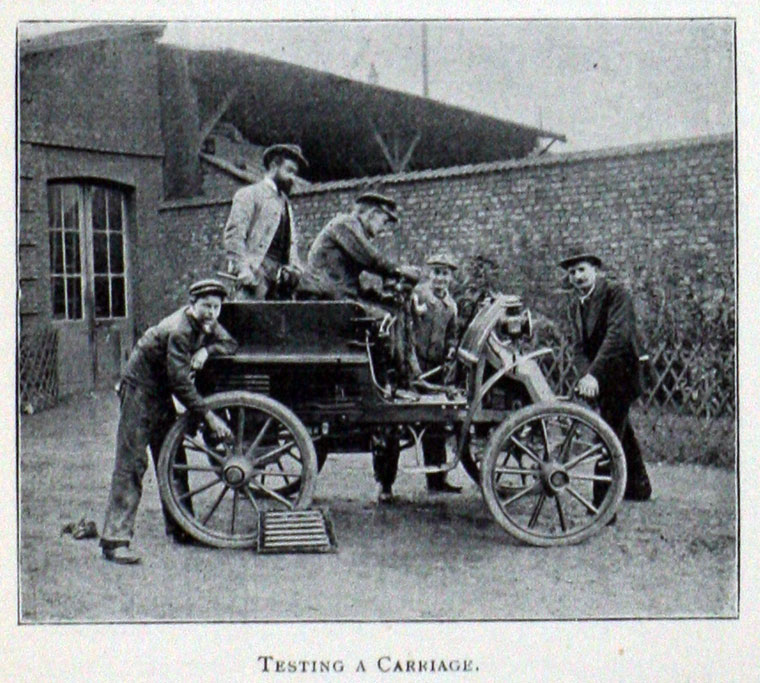 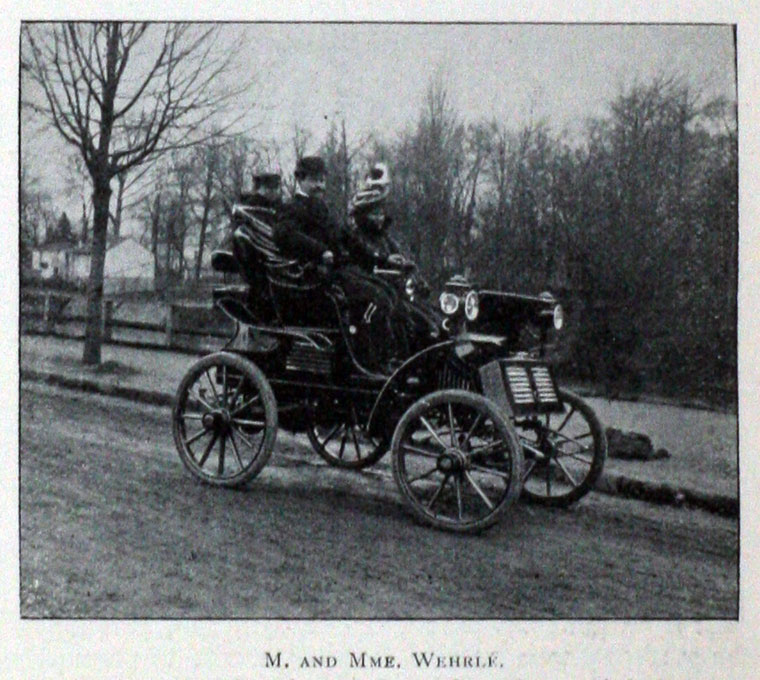 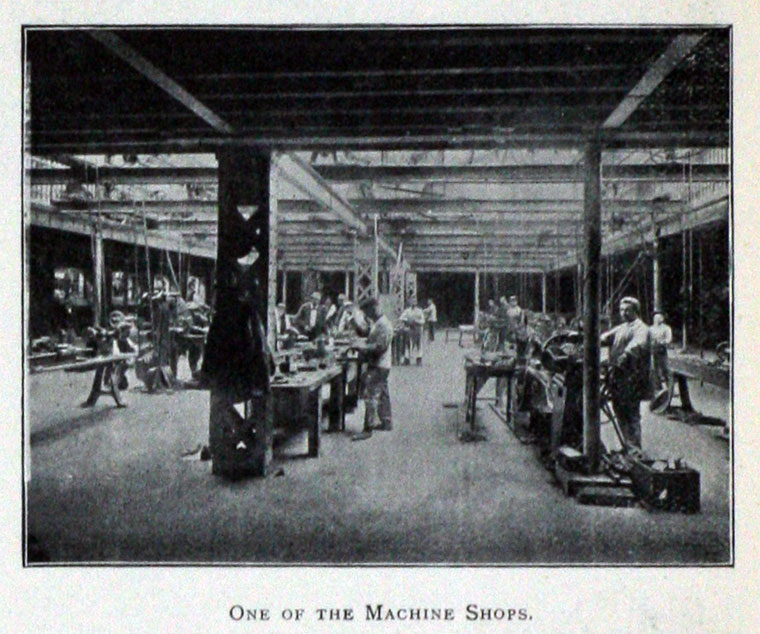 Prospects of the Autocar Industry in France [1]

The progress that the automobile industry is still making in this country is indeed astonishing. What with the interesting competitions, the speed attained, distances covered, and the defeat by motor cars of "special" railway trains that follow up races, it is natural that the French public should be excited over the possibilities of the ‘fin do siècle’ petroleum-motor. The principal firms are absolutely obliged to refuse orders, as they have now booked more than their output capacity can satisfactorily cope with. Ever since early in the season new motor carriages have been changing hands at high premiums, like shares paying a fifty per cent. dividend. What will be the situation before the summer holidays?

Les anciens etablissements de Panhard et Levassor maintained their supremacy as the leading French makers by successfully piloting the three winning carriages in the recent Marseilles-Nice race. Their orders continue to flow in with unlimited rapidity, so much so that the value of orders received in a fortnight recently amounted to more than £30,000, which figure was given me by the genial managing director Monsieur Pierron, so may be taken as absolutely official.

The De Dion and Bollee factories are working to the full extent of their capacity, and their order books are crowded for months ahead.

On fine days the lovely Bois de Boulogne is literally swarmed with motor cars of all shapes and sizes, elegant and unsightly, whilst the De Dion motor tricycles, single, or drawing the little "Didier" trailing carriage, are to be seen in hundreds.

Specially-built racing carriages are being hastily turned out by energetic firms anxious to get good positions in the various races to be held this season, but principally for the Paris to Amsterdam contest. A good deal of attention is also being paid to show vehicles for the exhibition to be held by the Automobile Club de France.

I have this week visited the new works for the manufacture of the Bollee voiturettes, and I shall have pleasure in giving a descriptive account in a future article, as they are introducing several improvements for '98.

Continuing my visits to the various Parisian automobile factories I am now able to give some details of one of the largest works solely engaged on the manufacture of autocars.

The Societe Continentale d'Automobiles is the new title of this firm, but it is better known throughout the country as Gautier and Wehrle, and as these makers are not recognised so easily tinder the name of the Societe, I will use the more familiar designation throughout this article.

Gautier and Wehrle have been established since 1894, and they have now a capital of 2,500,000 francs (£100,000) to work upon, which is decidedly none too large for the importance of their works. The factory is splendidly situated outside the fortifications on the borders of the River Seine, at Levallois-Perret, right in the heart of the French "Coventry," adjacent to the Velodrome de la Seine and Clements' gigantic new cycle works.

To give an idea of the importance of Gautier and Wehrle's factory it will be interesting to illustrate same by a series of photographs taken specially for The Autocar by the writer.

These magnificent works are almost new, and were built for an English company for the manufacture of all descriptions of wooden boxes before they were taken over by Gautier and Wehrle for the construction of motor cars. They suit the new purpose admirably now that they have been properly transformed and fitted up with valuable tools and machinery.

The are lighted throughout by electricity. The engine is in itself well worth a visit. It is 250 nominal horse-power, but this can be considerably increased when necessary, as the steam is supplied by three immense boilers, so that, with this ample reserve of boiler power, the firm have every facility for getting more out of their engine should their requirements necessitate it at any future period.

This firm employ at the present moment about two hundred workmen, as they are only just "recovering from the experimental stage," which all motor car manufacturers have to pass through at an enormous cost before the standard model can be turned out in quantities. Gautier and Werhle have now gone through all these difficulties and have come out very successful. They have now only to improve the minor details as the autocars are turned out, which details, however, are of very considerable importance, more than most people or even practical engineers imagine till they have had a try at motor car building themselves. They have orders on their books for 150 vehicles, and they can only guarantee delivery for orders given at present, five months hence; which is the general situation with all the leading manufacturers.

The works are well-arranged, and have a separate building at the entrance for the concierge, and another building for the general offices with a large board room above on the first floor. Then comes the engine room, drawing manager's offices, at the back of which are the works. The workshops are very extensive, exceptionally light and well adapted for autocar construction.

On the left is the forge, and on the right the carriage building department, as all the carriage work, bodies, and upholstering are executed on the premises. The painting and general finishing are also done in adjacent shops.

Monsieur Gautier is one of the technical managers, and personally gives his attention, principally, to the mechanical and carriage work, whilst Monsieur Wehrle personally manages the motor and fittings department.

Thanks to Monsieur Georges Agnus - the competent sales manager - I visited the whole works, and saw every possible detail.

One of the principal features, of a practical character, connected with the Gautier and Werhle carriages, is that the ordinary chain-driving system used in general by other motor car makers has been abandoned. They have adapted an ingenious invention, whereby the driving is done from the motor to the back axle direct, similar to the patent driving axle used on the new De Dion and Bouton petroleum motor cars.

It is so arranged that the vibration or shocks from the back wheels, likely to play havoc with the driving gearing, are taken almost completely away by the introduction of several universal joints that free the axle, which thereby "gives" to the springing of the vehicle, or the uneven surface and shocks that may be communicated through the wheels. It will be noticed in the illustration of one of their latest carriage designs at the commencement of this article that no chains are visible.

The total absence of driving chains on the back wheels gives a much neater appearance to the carriage, and there are several advantages attending this system that are almost too apparent to mention.

Suffice to say there is less noise, less friction, and less possibility of accident than with chains, which stretch, rattle, and even come off, exposed, as they are, to dust, grit, and mud.

This firm are making some very pretty models, and their dogcart, as in the first illustration, looks all over an English design, and would take well in England with those who can appreciate smartness.

An American phaeton for five persons, almost finished, I learned, has been made specially to the order of Sir David Salomons. This vehicle is exceedingly graceful, and of a very practical design, it having an eight horse-power motor, so essential if high speed be desired on English hilly roads.

Gautier and Werhle make three different motors, a five and twelve horse-power horizontal and a two-cylinder eight horse-power vertical, the latter being for the clientele requiring power for speed and uphill work, and as this motor is fitted into comparatively small and light carriages, it has to be vertical, as there is not sufficient space across the vehicle in which to place it, hence the reason for its perpendicular position.

There are four speeds fitted to the eight horsepower motor, giving eight, sixteen, twenty-four, and thirty-two kilometres, which can be increased to forty or forty-five by "pulling at the governor," allowing the motor to revolve from its normal 700 revolutions per minute to 1,000 or more.

The five and twelve horse-power motors are horizontal, with two cylinders almost parallel, with platinum ignition tubes heated with incandescent pressure lamps at each extremity. The flywheel is situated in the centre, placed laterally with the carriage, as this position has been found to reduce vibration to its minimum.

The flywheel revolves 700 per minute, and by an ingenious arrangement by the connection of pliable wires with the governor, the revolutions can be reduced from the seat to about 250 or increased to 1,000, which both have their advantages for stopping, for speed or hill-climbing.

The motors are mounted with cooling blades where possible, besides having water jackets. An exceptionally small carburetter of an entirely new design is fitted, which is of extreme simplicity, and easily regulated from the driver's seat.

After visiting the works I assisted at the trial of a newly-finished carriage, which has to go through the competent hands of the ‘chef’ of each special department, and every vehicle is run about for a week or more with an old set of wheels and tyres before being passed on to the paint shop.

Michelin pneumatic tyres are fitted to all the carriages, unless otherwise ordered, and are not an "extra."

Before leaving, I was informed it was proposed to build additional works next year along the Rue de Courcelles entrance for tunning out electric carriages and motor cycles in quantities, models of which I only saw at present in their experimental stage.

My visit terminated with a spin in the Bois de Boulogne on one of the latest carriages turned out, and I left Monsieur Werhle, his wife and son, by taking a parting "snapshot" as above.