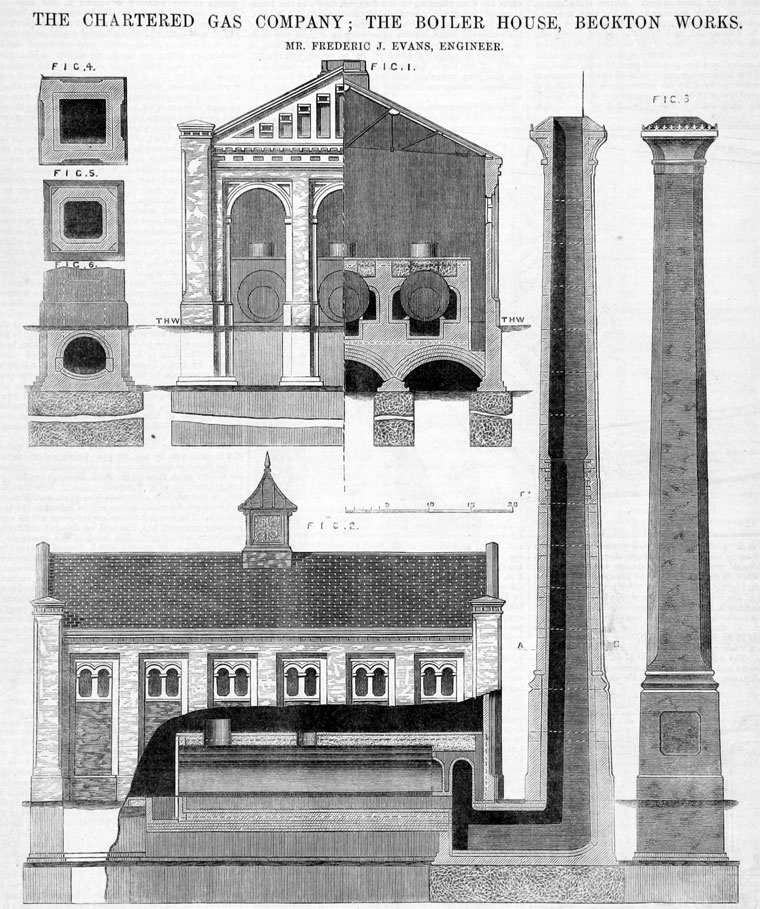 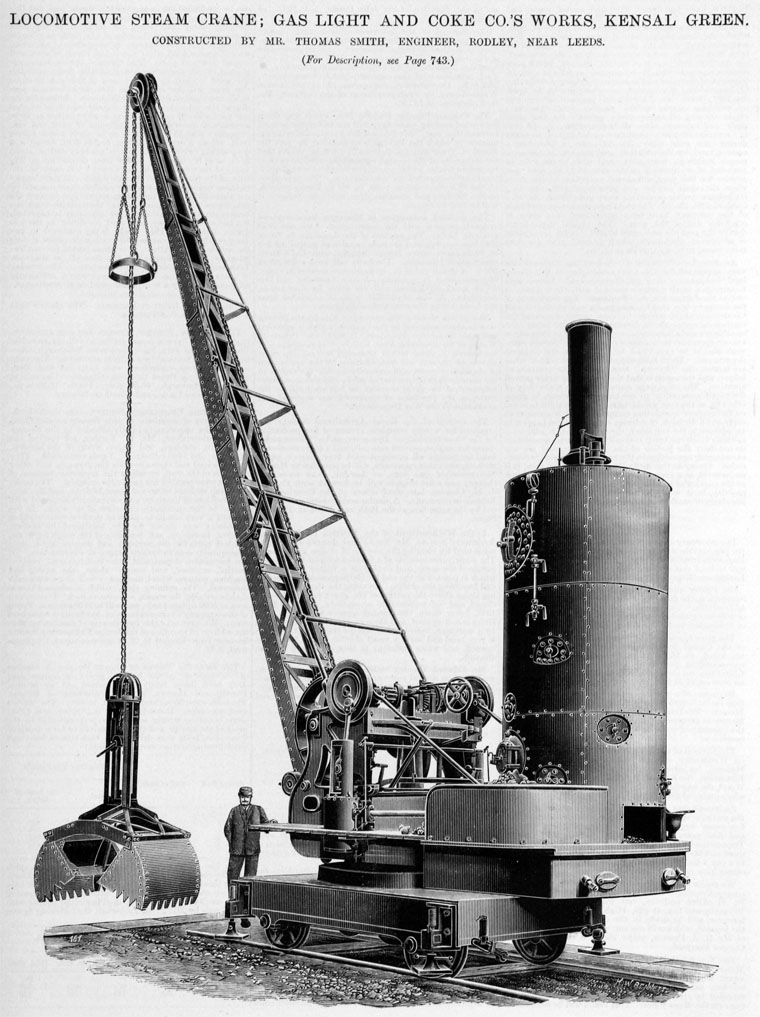 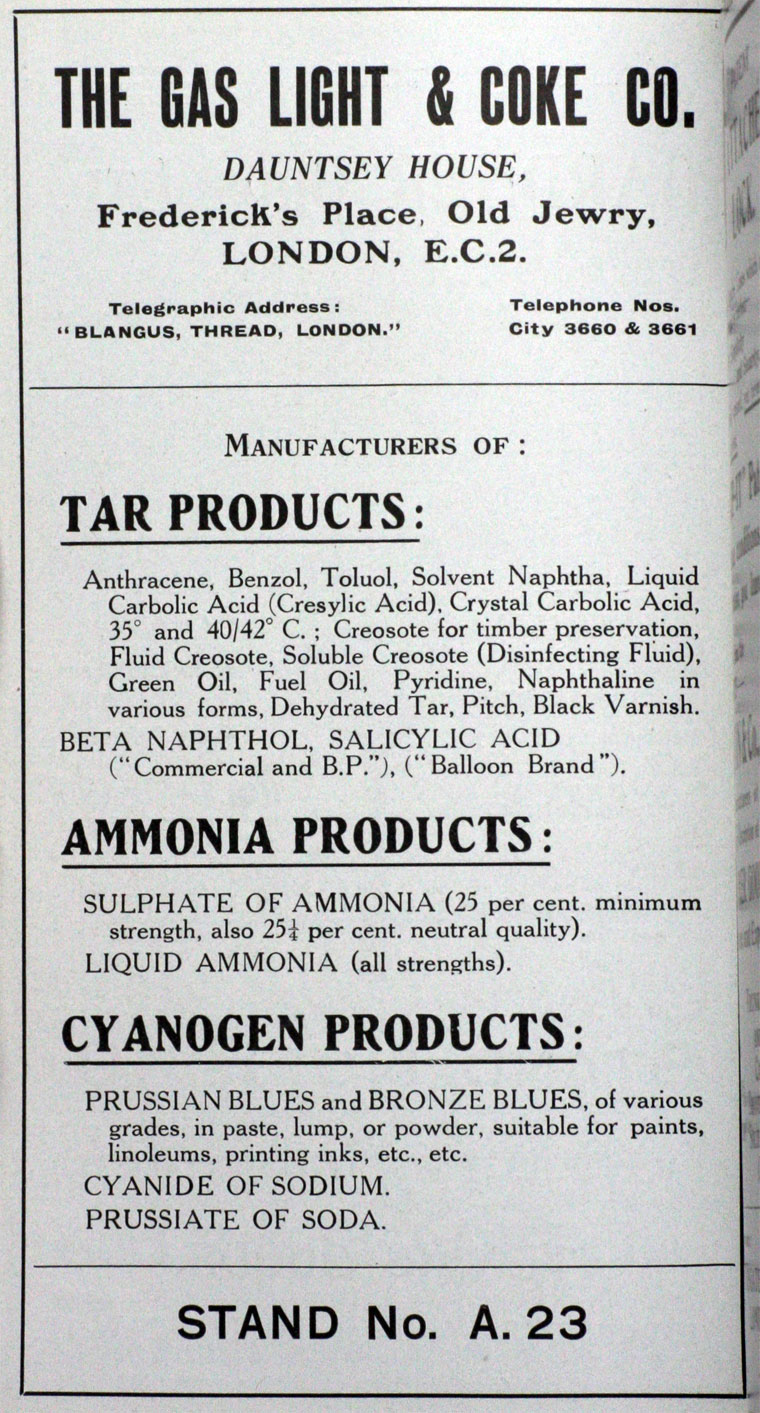 1807 A committee was set up under J. L. Grant to promote Frederick Winsor's scheme for gas lighting in London but met opposition. Eventually Winsor overcame the obstacles and Parliament authorised the company.

1810 9 June: The Gas Light and Coke Company, commonly known as the Chartered Company, was formally established; James Ludovic Grant was its first governor[1]. Winsor received the Royal Charter from the Prince Regent. This was the first major gas undertaking in the world. The company was to supply gas to the Cities of London and Westminster, the Borough of Southwark, and the adjacent precincts and suburbs.

By 1812 the finance for the company had been raised. The first meeting of the Court of Directors was on 24 June 1812[2]. The company (also known as the Westminster Gas Light and Coke Company and the London and Westminster Chartered Gas Light and Coke Company or the Chartered Gas Co for short) set up offices at 96 Pall Mall; a wharf and house were rented at Cannon Row, Westminster, which became the site of the works.

1812 Samuel Clegg joined the Chartered Gas Co. He immediately deemed the works at Cannon Row as insufficient. A second works was established at Providence Court, Great Peter St which when expanded became the Peter Street Works, then the site of a market-garden, poplars, and a tea-garden, which became the first operational gas works to supply gas for public consumption.

The increase in demand led to acquiring another site at Curtain Road, Moorfields.

1813 On December 31, Westminster Bridge was lit by gas; the old oil-lamps were removed from St. Margaret's parish, and gas lanterns substituted; on Christmas-day, 1814, the general lighting of London with gas began.

1814 both the Pall Mall offices and the wharf at Cannon Row were vacated and the Court moved to Peter St.

1814 a further site and works was established at Brick Lane, Old Street.

By 1815 30 miles of gas main had been laid in London but Winsor had been ousted from the company. He went to Paris and founded a small gas company there.

1815 Frederick Accum, Chief Chemist of the Company, had found that useful by-products could be derived from the tar; he used closed stills to produce a distillate substitute for natural turpentine. It was used as a solvent in paints and varnishes, and later for the public lighting of Waterloo Bridge and neighbouring streets.

1816 the Chief Engineer, Samuel Clegg, carried out some experiments on carbonising crude tar to make gas but these were abandoned in 1817.

1816 Thomas Dalton, a foreman caulker at the Blackwall shipyard of Wells, Wigram and Green, wrote to the company about possible applications for tar. As a result, the company employed Dalton as their sales agent for this material, principally used in caulking and rope making.

1817 the company decided to process all its crude tar itself, instead of selling it. Premises were leased at Poplar and a tar works was established at Orchard Place, near the junction of the River Lea with the Thames. Thomas Dalton was appointed Superintendent and, during the next ten years, he developed and expanded Poplar Works and built up and promoted the range of products, which included pitch, refined tar, varnishes, oils, paints and lamp black.

1818 The company leased premises at Orchard Street, Poplar, to establish a tar works.

By 1820 at least 20 independent provincial companies had been established.

After the 1829 Act was obtained, the British Gaslight Co extended its area of supply to districts previously supplied by the Chartered Gas Light and Coke Co.

By the 1830s the company, having tried all the alternative ways of buying coal, both direct and indirect, had settled on the use of agents for the purchase of coal but employed its own inspector.

1833 The Poplar tar-processing works were sold as a going concern to Turner, Shackell and Hopkinson, who continued to buy crude tar from the company. The Brick Lane and the Westminster works began their own ammonia products works so the company could make the most of its by-products.

Coke was sold to a wide domestic market, needing a large transport fleet. Every type of transport was utilised (usually owned by the company) - shipping, barges and railways engines were used for the import and export of coal and by-products at the works. Road transport (horse-drawn carts to wagons) catered for other supplies and maintenance needs.

1840 the Poplar premises reverted to the company; tar distillation may have ceased then, but Turner was still at the works in 1853, making "varnish".

1862 Continued to operate the 3 gasworks where it had been for many years:

but, unlike most of the other gas companies, none of these works were served by water or railway.

1860s There had always been difficulties in transferring coal into the principal works, at Westminster, from ships in the Thames. Combined with the increased production of gas, the company decided to build a larger and more accessible gas-making facility, where colliers could be brought right up to the works at Gallions Reach, Barking, Essex, on the north bank of the Thames. Gas would be taken to central London by a trunk main.

1868 Construction began at what would be called Beckton Gasworks. Beckton was several miles from the nearest village, East Ham. The company built a small village beside the road into the works for key operators; this included churches, shops, a post office and a public house. This was the first works built by the company since its original 3 gas works.

1870 After the passing of the City Gas Act, the company amalgamated with the City of London Gas Light and Coke Co and the Great Central Gas Consumers Co[4]

1870 Production started at Beckton, which were to become one of the largest gas works. The company then decided to process its tar and ammonia by-products. Within a few years Beckton Products Works was built on a site adjacent to the gas works. Another by-product, coke, was sold to a wide domestic market. The rapid expansion of the Gas Light and Coke Co led to the need for a large transport fleet. Every type of transport was used and usually owned by the company. Shipping, barges and railway engines were often used for the import and export of coal and by-products at the works. Road transport ranging from horse drawn carts to wagons catered for other supplies and maintenance needs.

1872 Five men were jailed for twelve months following a strike at the Beckton works in support of two workers sacked for requesting a pay rise. The sentence was subsequently reduced to four months.

c.1876 Amalgamated with the Independent Gas Co and the Imperial Gas Co[8]

1882 One of only 4 companies supplying gas to London; served customers north of the River Thames; took over the London Gas Co[11]

1889 Men were laid off from Beckton, prompting the founding of the National Union of Gasworkers and General Labourers, which subsequently became part of the General, Municipal, Boilermakers and Allied Trades Union (GMB Union).

The expansion of the company and competition from electricity in the late 19th century, led to development of the domestic market. Lady Demonstrators were employed to promote gas cooking and the Home Service eventually developed into a full advisory service on domestic gas use.

1899 As a large employer, the company took its social obligations seriously and provided various pension, sickness and benefit funds. Links were established with the Territorial Army and by the time of the Second Boer War in 1899, company employees were eligible for duty as reservists and volunteers were given leave of absence.

1912 A very large self-trimming collier, Fulgens, was built by Wood, Skinner and Co for Gas Light and Coke Company.

1924 Two of London's gas undertakings, the Gas Light and Coke Company and the Brentford Gas Co agreed to amalgamate. Subject to parliamentary sanction being secured the amalgamation, it is proposed, should become effective on January 1st, 1926. The amalgamation, it is held, will provide the Gas Light and Coke Company with fresh territory for expansion and development, and in the Brentford Company's area will secure economies principally in the matter of transport, which has always been a source of some difficulty in view of the situation of the company's works at a considerable distance up the river Thames. The Gas Light and Coke Company is already the largest supplier of gas in the world. Last year it sold over 167 million therms, to produce which it used 2,055,117 tons of coal and carburetted 10,689 431 gallons of oil. The Brentford Company, together with the Richmond and the Harrow Companies now incorporated in it, sold last year over 27 million therms, and used 318,380 tons of coal and 2,650,293 gallons of oil. [13]

1926 The new coal handling plant at Beckton Gasworks opened by His Majesty The King who was accompanied by the Queen.

1939 The Gas Light and Coke Co, the Commercial Gas Co, the Wandsworth and District Gas Co, the South Suburban Gas Co, and the South Metropolitan Gas Co promoted a Bill in Parliament concerning the efficiency of gas appliances to be installed in London[15]

Between 1812 and 1949 the company controlled 50 different works, through the amalgamation and take over of 38 gas companies, either directly or through previous amalgamations, in the North Thames area.

1949 The company was so large that, after nationalisation of the gas industry in 1949, the area it covered, which stretched from Pinner in North West London to Southend-on-Sea in Essex, became North Thames Gas Board, one of the twelve regional Gas Boards.

It is identified as the original company from which British Gas is descended.