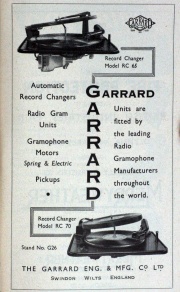 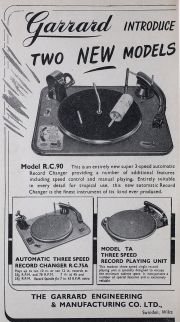 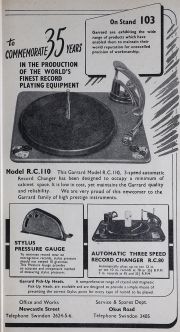 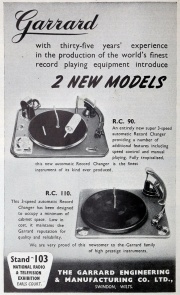 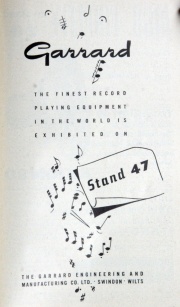 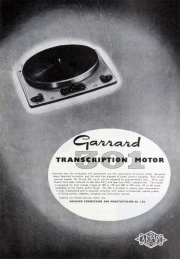 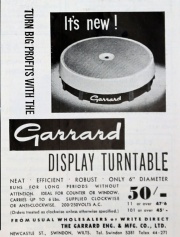 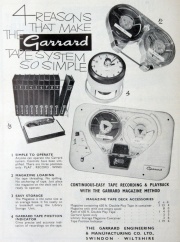 1915 Formed by Garrard and Co with Major S. H. Garrard as Chairman, to run a factory set up in the premises of the White Heather Laundry in Willesden, London, to create precision rangefinders, as Garrards had the specialist equipment necessary.

1918 At the end of the war, the workers returned to their previous jobs, and Garrard decided to continue to operate the new company and look for consumer products to manufacture. They hired a young engineer, who became General Manager, and started the production of small lathes and boring tools. He had also seen a need for quality spring wound motors for the fast developing gramophone manufacturing industry.

1919 The White Heather Laundry had requested its premises back, so the company looked for a new location. They moved to Swindon where there were plenty of skilled engineering apprentices from the Great Western Railway Company, the largest employer in the town.

1920 The development of the spring-wound motor continued and as a result of its quality, silent running and price, it was used by the major gramophone companies. The company had a policy that one model of every range should be the best obtainable.

1920-28 Other products produced at this time included motors for construction kits (Primus), a cine-camera/projector ( Campro), and a device for playing records at a constant linear speed which almost doubled the playing time (The World Record Controller).

1926 Garrard Engineering and Manufacturing Company Ltd became a public company to finance the expansion needed to meet the demand for spring motors.

1928 Development started on electrical motors for gramophones, which resulted in a belt drive motor. Because there were few electrical supply standards at that time, it could be used with AC and DC, 25 to 100 Hz, and 50 to 250 Volts.

1930 The motor development programme led to the first Garrard gramophone. Previously the company had only produced motors for its own customers. They decided to make a super quality alternating current gramophone motor as a prestige model. It was taken up by the BBC and other broadcasters, cinemas, and it became very popular with Hi-Fi enthusiasts. It was originally just for 78rpm records, but was later modified to play the 33 1/3rpm, 16 inch records used in cinemas. It was the first of what were later to be called transcription turntables.

1931 A subsidiary company, Garrard Clocks, was set up to manufacture and sell clocks using spring motors produced by the parent company.

1932 The first Garrard record changer was developed. The development of radio tuners and amplifiers meant that electronic pickups could replace the old acoustic horn systems. This led to a big increase in the sales of radiograms, and record players. Garrard produced some arms and pickups for its turntables.

1938 The RC100 record changer, which could play both sides of each record, and also mixtures of 10 and 12 inch records, was produced for sale in the USA.

1939-45 Production ceased. Large numbers of clock-based mechanisms were made for mines, and other military equipment.

1945 Following the death of Major S. H. Garrard, all the links with Garrard and Co, the Crown Jewellers, were severed and The Garrard Engineering and Manufacturing Company Ltd became a separate entity.

1946 Competition was fierce and a new record changer had to be rapidly developed. It, and similar models, were produced around the clock as demand escalated. It was the last model to play only 78rpm records.

1948 The Model RC70 record changer was introduced to play the new 10 and 12 inch, 331/3rpm and 7 inch 45rpm vinyl records, as well as the older 78rpm records. It was the forerunner of the RC80 in 1950, which sold for many years. Large numbers were sold in the USA. New lightweight pickups and arms were developed for these records, and the RC80 was the first with a magnetic cartridge.

1954 A Garrard turntable was launched for the serious HiFi market. It has become one of the icons of design and performance. Clockmaking was stopped due to cut-price competition.

1957 Garrard released one of the first stereo pickups when stereophonic records were introduced.

1958 A serious factory fire occurred, but production was restored with the help of a neighbouring company, Plessey, which loaned factory space. A further small factory in Blunsdon was acquired to produce component parts.

1959 The new Autoslim series was launched with help from Plessey. The SP25 was probably the most popular model Garrard ever produced.

1960 Garrard became part of the Plessey group of companies with the name Garrard Engineering Ltd. Another factory was acquired in Swindon. There was also a factory in Wigan which exported to the USA via Liverpool.

1961 Garrard developed a novel Magazine Tape Deck, but it failed as it was more cumbersome than the Philips Compact Cassette launched in 1963.

1964 The Model Lab 80 was launched as the first record changer which had the performance of a transcription turntable. It had many unique adjustment features including a wooden arm.

1971 The Zero 100 automatic transcription table was introduced with its revolutionary tangential tracking arm. Garrard received a series of awards for its development - The Queens Award, The Italian Mercurio d'Oro Award, and the USA's Emile Berliner Award.

During the 1970s Garrard fell on hard times when under the Plessey banner failed to respond to the rising challenge of the Japanese hi-fi industry. The result was the demise of a company that at one time employed over 4000 people to a position of £3 million losses a year and a workforce of 400.[4]

1979 November: Garrard was sold to Gradiente Electronica of Brazil for £1 million, partly to protect a maker record player chassis supplier to its Brazilian factories but more importantly to provide a respected European brand name which it could use as a launching pad to break into eastern markets - it already had 80% of the South American hi-fi markets.[5]

1981 June: Garrard pitched itself back into the high-fi business with the slogan "The Empire strikes back" and the launch of the completely new range of equipment aimed at challenging the Japanese stereo industry. Alan Kirton was managing director.[6]