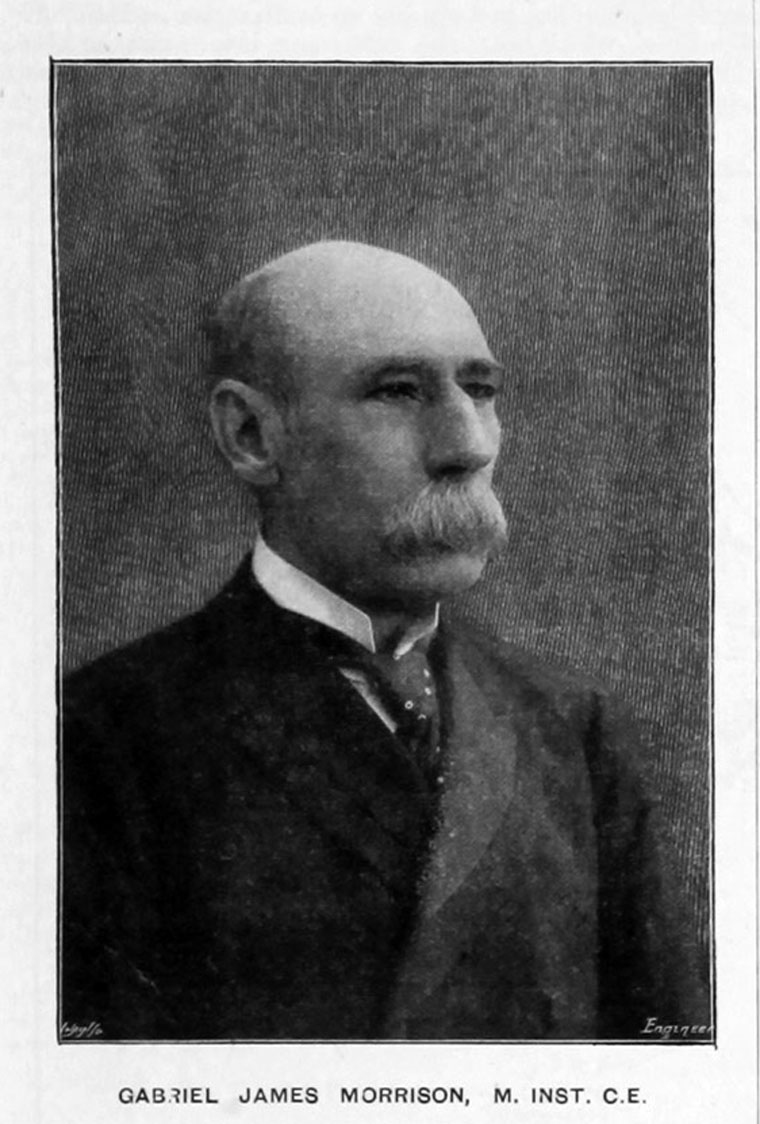 GABRIEL JAMES MORRISON was born in London on 1st November 1840, and studied at the Glasgow University under Professor Rankine and Professor Thomson (afterward Lord Kelvin). Whilst there he was awarded a prize for experimental investigation and another for his answers on the theory of the electric telegraphs; a further prize was given him by his fellow-students for general eminence in the ordinary business of the Natural Philosophy class.

During this period he served an apprenticeship of five years with Messrs. Robson Forman and McCall, civil engineers of that city.

He was selected by Sir William Thomson as one of the electricians to represent him in Newfoundland, and was present at the laying of the first telegraphic cable across the Atlantic Ocean.

For a year and a half he had the responsible charge as resident engineer of the Glasgow and Milngavie Railway.

In 1863 he left Glasgow, and joined the staff of Mr. (afterwards Sir James) Brunlees, in London as one of his principal assistants, which position he occupied for 11 years. During this time he acted as resident engineer on the following works Cleveland Railway, Lynn Dock, Clifton Extension Railway; he also prepared the surveys of the Volo and Larissa Railway, and was engaged on the following works (making many of the principal drawings): Lynn, Avonmouth and Whitehaven Docks, Sao Paulo, the Central Uruguay and Honduras Railways, and in this country the Solway Junction, the Lynn and Sutton and Spalding and Bourne Railways.

During this time he was also much engaged in parliamentary work and the preparation of parliamentary plans, estimates and the collecting together of engineering evidence.

He read at the meeting of the British Association in Belfast, in 1874, a Paper on "The Adoption (for general purposes of navigation) of Charts on Gnomonic Projection instead of on Mercator's Projection," which eventually resulted in his book on Maps referred to hereafter.

On the completion of the Clifton Extension Railway, he commenced practice on his own account in Westminster, but shortly afterwards received an offer to proceed to China as engineer-in-charge of the first railway laid down in that Empire - namely between Shanghai and Woosung. This was successfully laid, and the line was opened on the 1st July 1876; soon afterwards it was purchased by the Chinese Government and torn up by them, the materials being shipped over to the Island of Formosa, where they were allowed to rust away.

He then established himself in business in Shanghai as a civil engineer, making trips to Formosa, Peking, and the interior of China, visiting officials and endeavouring to introduce a system of trunk lines in China. He prepared many plans and estimates in connection therewith, and in fact devoted all his energies to this purpose.

He also took great interest in "China's Sorrow," the Yellow River, which has caused such devastation, and he made careful examinations and reports to the Chinese Officials, and wrote two Papers on this subject which were read before the Institution of Civil Engineers in 1888. Much of the above-mentioned work was carried out in connection with or in addition to his ordinary business in Shanghai.

In 1885 he entered into partnership with Mr. F. M. Cratton, F.R.I.B.A., and the firm of Morrison and Cratton, civil engineers and architects, was for many years connected with the largest and most important works carried out in Shanghai and other places in China. The local affairs of Shanghai occupied a share of his attention, and he occupied a seat for many years as a member of the Shanghai Municipal Council.

He was the first President of the Society of Engineers and Architects in Shanghai, and had also been Commandant of the Shanghai Volunteer Corps.

He left Shanghai and returned to London in 1902, and was associated with Sir John Wolfe Barry, K.C.B., and partners, as consulting engineers of the Shanghai-Nanking Railway.

Mr. Morrison joined the Society of Arts of London in 1900, and the Society's silver medal was conferred upon him in 1903 for his Paper on Maps and Charts. He also wrote a book upon the same subject, which has been published by Edward Stanford.

His death took place at his residence in Kensington on 11th February 1905, at the age of sixty-four.

GABRIEL JAMES MORRISON died at his residence on February 11, 1905.

He was born in London in 1840, and received his training as an engineer in the firm of Robson, Forman, & McCall, civil engineers, of Glasgow, to whom he was apprenticed, carrying on his studies at the same time at the Glasgow University. Here he came particularly under the genial influence of Professor Sir William Thomson (now Lord Kelvin). His early inclinations led him to devote his attention to electrical science, and he was accustomed to spend the whole of his spare time in the apparatus room at the University, assisting Professor Thomson in his experiments, more especially those connected with the early development of submarine telegraph signalling. He was subsequently appointed an assistant electrician in the Atlantic Telegraph Company, and took part in the laying of the cable in 1858, remaining in Newfoundland in the service of the Company until 1861, after which he returned to Glasgow, and took the responsible position of resident engineer of the Glasgow and Milngavie Railway.

In 1863 he left Glasgow and joined the staff of Sir James Brunlees in London as one of his principal assistants, and from this period onwards his activities were mainly confined to the sphere of civil engineering. Eleven years later he commenced practice on his own account in Westminster, but shortly afterwards accepted an offer to proceed to China as engineer-in-charge of the first railway projected in that empire, for which Sir. G. B. Bruce was the consulting engineer. The line was successfully laid and opened in July, 1876, between Shanghai and Woosung, but was soon purchased by the Chinese Government and torn up by them. Mr. Morrison subsequently established himself in business in Shanghai as a civil engineer, and devoted his greatest energies in endeavouring to promote the introduction of a system of trunk lines in China. His efforts in this direction involved the making of numerous journeys through the interior of the country, which gave him unique opportunities for becoming intimately acquainted with the people and their habits. Through his justice and fair dealing he won the especial regard of all native officials with whom he came in contact. Descriptions of his travels appeared from time to time in the proceedings of learned societies, and he was also the author of many papers dealing with the future development of engineering enterprise in China. He received a silver medal from the Society of Arts for his paper on maps and charts, and also published a book upon "Maps, their uses and construction." Mr. Morrison left Shanghai and returned to London in 1902, where he associated himself with Sir John Wolfe Barry, K.C.B., and Mr. Arthur J. Barry as consulting engineers of the Shangai-Nanking Railway.

Mr. Morrison was a Member of the Institution of Civil Engineers, of the Society of Arts of London, and of the Royal Institution.

He was elected an Associate of the Institution of Electrical Engineers in 1872, and was admitted to full membership in 1884.