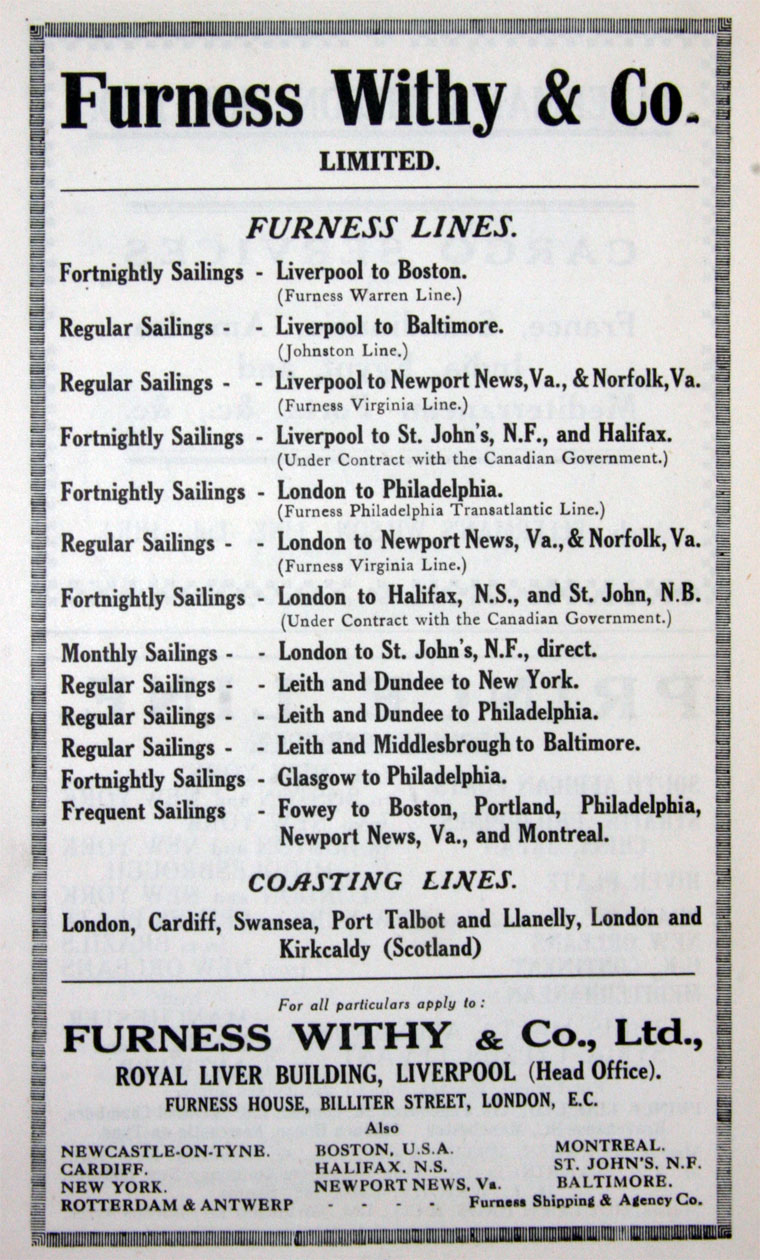 1885 Christopher Furness collaborated with Thomas Wilson to form the Wilson-Furness Line to operate services between Newcastle and New York.

During the 1880s, Furness extended his transatlantic liner operations and built up a substantial fleet of tramping vessels.

1891 Having made a large fortune in speculative shipbuilding, Furness amalgamated his fleet of 18 wholly-owned steamers and investments in 21 other ships with the West Hartlepool shipbuilding firm of E. Withy and Co, shipbuilders of Middleton Ship Yard, Hartlepool. The new concern, Furness, Withy and Co, was registered on 16 September with capital of £700,000. It would amalgamate the businesses of Mr. Christopher Furness, steamship owner, with that of Messrs. Edward Withy and Co, iron and steel steamship builders and repairers[2].

1892 The first subsidiary company was formed, the Chesapeake and Ohio SS Co Ltd and a joint service to Boston was started with Frederick Leyland and Co.

1896 The Middleton yard was modernised with berth extensions and electrical power introduced so that steel could be worked with more effectively.

1896 The Wilsons and Furness-Leyland Line was registered on 4 September, to take over the London and New York business of Thomas Wilson, Sons and Co of Hull, and the London and Boston businesses of Frederick Leyland and Co of Liverpool, and Furness, Withy and Co of London, with steamers and leasehold properties. [3]

1897 Victoria the largest vessel ever built by the Middleton yard was launched by Lady Furness in August. It was the first of many transatlantic liners built by them.

1898 Manchester Liners Ltd was formed; the rights of the Canadian and Newfoundland SS Co were acquired.

1901 The Wilsons and Furness-Leyland Line, with its London - New York service, was sold to the International Mercantile Marine Co

1903 The coasting service of Furness, Withy and Co was incorporated in a new company Tyne-Tees Shipping Co [4]

1906 Furness, Withy and Co took over the management of Neptune Steam Navigation Co (its fleet was purchased in 1910). Acquired Agincourt SS Co and the Norfolk and North American Steam Shipping Co.

1909 Furness amalgamated the Middleton yard with the Harbour yard acquired from Irvines. The trading name became Irvine's Shipbuilding and Dry Dock Co Ltd. Asiana launched in May of the same year was the first under the new company name. Profit sharing was also introduced for workers.

WWI During the first world war the yard made 2 tankers, a tramp and two cargo liners. In addition a number of standard "B" type trams and a "Z" type tanker were also made along with some other smaller vessels.

The Furness Yard was built as an emergency shipyard to cope with the repair requirements of World War I. The shipyard was authorised under the wartime emergency programme and construction began in 1917 on an 85 acre site (50 acres reclaimed from tidal land) and offering 2500 feet of frontage onto the River Tees at Haverton Hill, on the north bank opposite Middlesbrough. The finished yard had twelve building berths (ranging up to 700 feet) and a fitting-out basin 1000 feet x 250 feet. It was a subsidiary within the Furness shipowning group[6].

1917 The Middleton and Harbour yard were sold to a syndicate acting through the Commercial Bank of London.

1921 This was the last year that the company showed a profit due to the freight slump of the preceding year. The yards remained closed until 1930.

1930 It was decided to liquidate the yards. The Harbour yard was sold for scrap. The Middleton yard was bought up by a syndicate of businessmen and used for shipbreaking as Irvine's Ship-building and Dry Docks Company (1930) Ltd.

1933 On the collapse of the Kylsant shipping empire, Furness, Withy obtained control of Shaw, Savill and Albion Co

1939 the management of Bowater SS Co was taken over.

1938 National Shipbuilders Security Ltd bought the (Middleton?) yard, dismantled the berths but left the dry-dock and fitting-out quay which was then used extensively during World War II.

1954 Acquired a substantial holding in Airwork, the airline[7]

The new owners gradually disposed of the ships a

1998 the name of the firm reverted to Furness, Withy and Co, Ltd and was still operational in 1999.