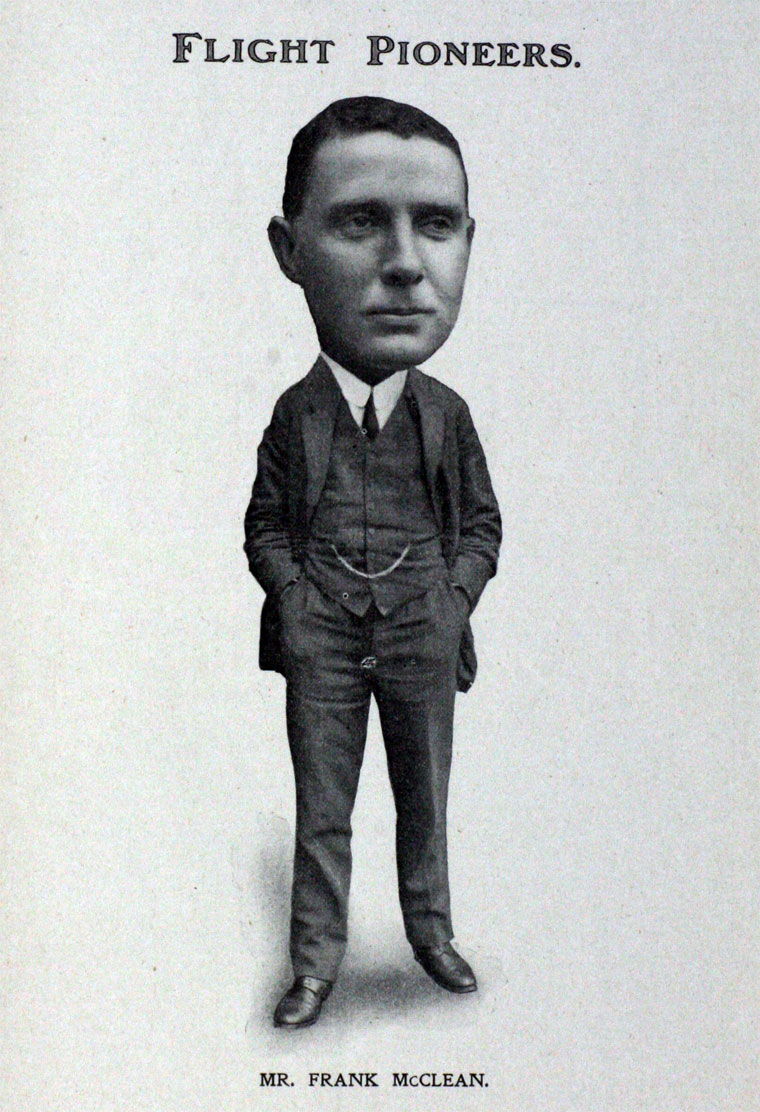 1909. Frank McClean in his Short-Wright machine.

1909. Frank McClean in his Short-Wright machine.

1909. The Short Brothers, the Wright Brothers, Frank McClean and others at Shellbeach 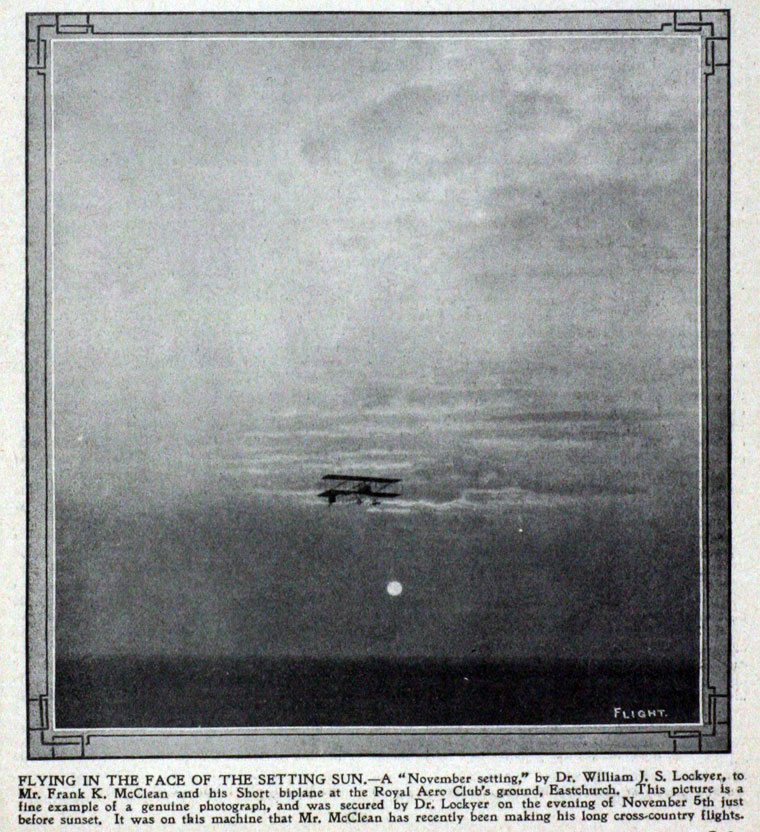 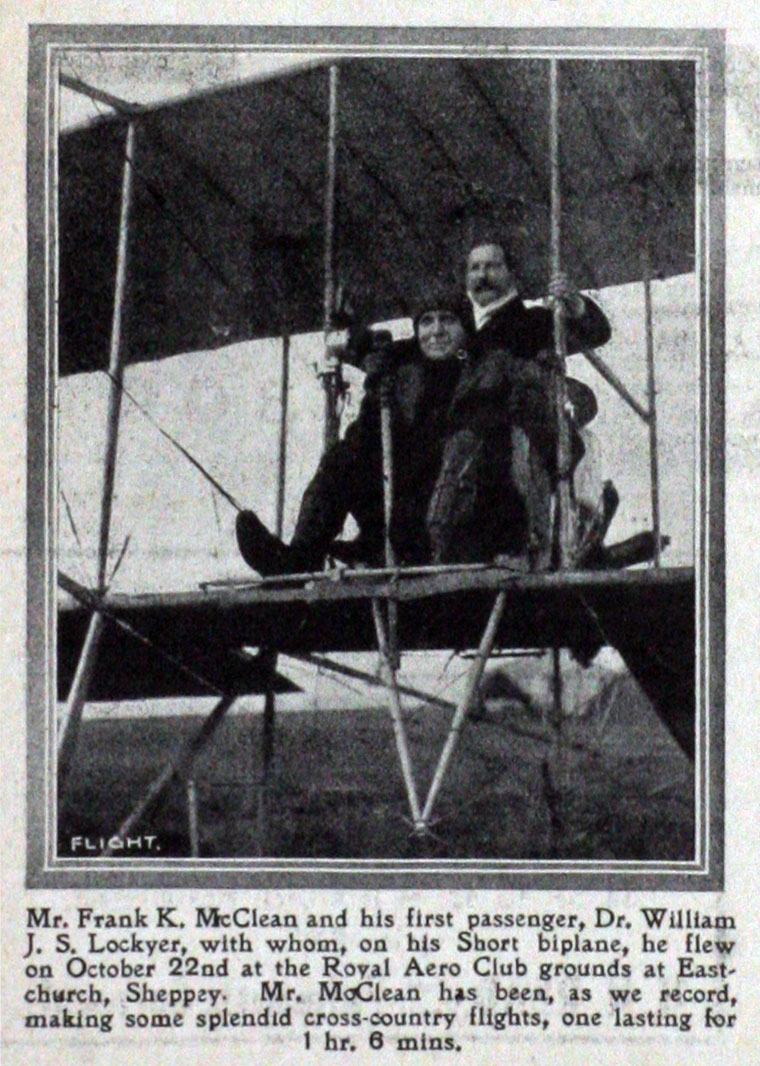 1909 Mclean acquired Stonepits Farm on the Isle of Sheppey.

1909 McClean started to work for the Short Brothers as their test pilot, on an honorary basis, until this began to place too many demands upon him in 1913.


Sir Francis McClean, A.F.C., who died in a nursing home in London on August 11, 1955 at the age of 79 after a long illness, may be said to have been the founder of naval flying as he certainly was the founder of amateur flying in heavier than air machines in Britain.

A civil engineer by profession, he retired from the Indian Public Works Department at an early age and had his first experience of flight in 1907 as assistant to Griffith Brewer in the Gordon-Bennett balloon race from Berlin.

In the next year's race from Zurich he was a pilot and in December of that year flew with Wilbur Wright at Le Mans. The following month saw the beginning of his long cooperation with Short Brothers, of Rochester, in developing the heavier than air machine. Leysdown and subsequently, Eastchurch, in the Isle of Sheppey, were the sites of these early experiments on ground bought by McClean and subsequently let to the Aero Club of Great Britain (now the Royal Aero Club) at 1s. a year.

Interest in heavier than air flight grew rapidly and in February 1911 McClean offered to lend aircraft so that naval officers could learn to fly, and the Admiralty accepted the offer. An offer to the War Office to give Territorial offricers a similar opportunity was turned down.

Francis Kennedy McClean was born on February 1, 1876, the son of Dr. Frank McClean, F.R.S., and was educated at Charterhouse and Cooper's Hill. He spent only four years in the Public Works Department in India, from 1898 to 1902. To his flying activities he added submarine photography*, in which he was also a pioneer, and in cooperation with the late Hugh Spottiswoode took some remarkable photographs of the wreck of the Oceana at Eastbourne. That was in June 1912. In August of that year he was back in the air and created a record by flying up the Thames in a seaplane, passing between the upper and lower parts of Tower Bridge and under London Bridge without touching water.

In the winter of 1913 he flew up the Nile with four passengers. He joined the Royal Naval Air Service on August 6, 1914, and was put on Channel patrol, but later became chief instructor at Eastchurch. On the foundation of the R.A.F he was given a commission, but resigned in 1919.

In July 1954 a memorial was erected on the Isle of Sheppey to record that the island contained the first centres of heavier than air aviation in England. Sir Francis McClean'[s name is among those of 13 aviators recorded on the memorial.

He married in 1918 Aileen, daughter of W.H. Wale, who survives him together with two daughters of the marriage