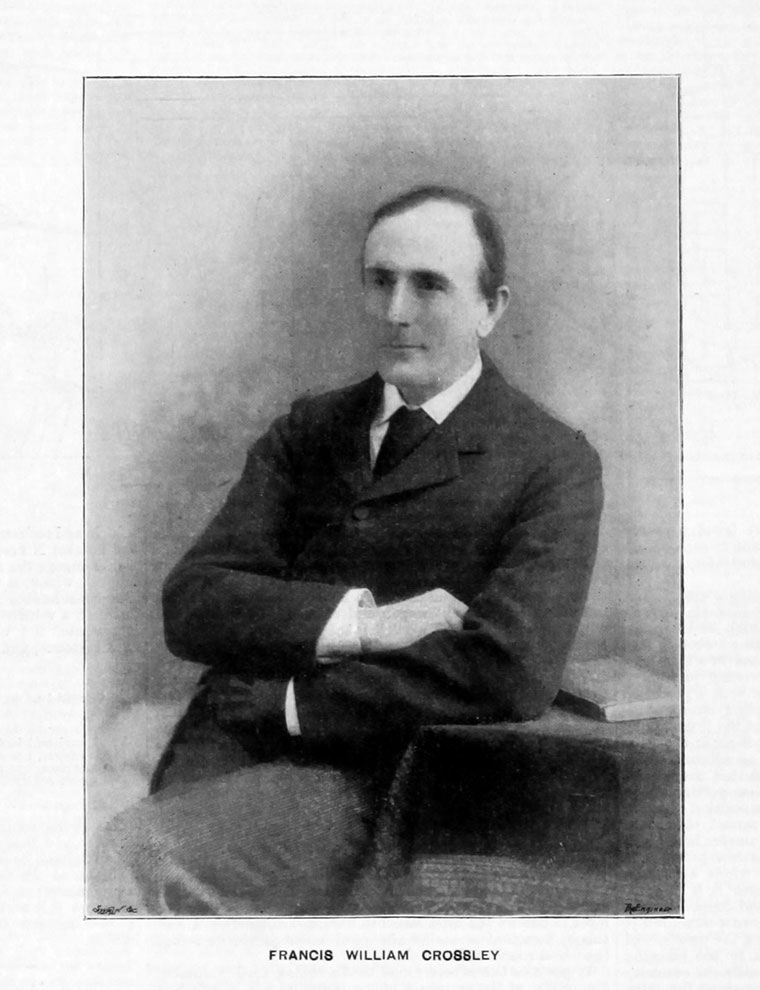 1867 With help from his uncle, Francis bought the engineering business of John M. Dunlop and Co at Great Marlborough Street in Manchester city centre, including manufacturing pumps, presses, and small steam engines. He was joined in the business by his brother, William John Crossley, shortly after the purchase. The company name was initially changed to Crossley Brothers and Dunlop. Both of the brothers had served engineering apprenticeships: Francis, known as Frank, had been trained at Robert Stephenson and Co in Newcastle upon Tyne. William concentrated on the business side, Frank provided the engineering expertise.

The brothers were committed Christians and strictly teetotal, refusing to supply their products to companies such as breweries, whom they did not approve of. They adopted the early Christian symbol of the Coptic Cross as the emblem to use on their road vehicles.

THE LATE MR. FRANCIS WILLIAM CROSSLEY.- We regret to learn of the death, at the age of 57 years, of Mr. Francis William Crossley, who has perhaps been better known for his works of philanthropy even than as the introducer into this country of the gas engine.

He came of a North of Ireland family, and was fortunate in securing entrance as an apprentice into the Armstrong Works at Newcastle; but while still a young man he went to Manchester, and there, with his brother William, started works as engineers on quite a small scale; but later they bought the home and colonial rights of the Otto gas engine, and since then they have extended their works, and their name is closely associated with the famous German engineer in the development of the oil and gas engine.

Mr. Crossley, however, was not prominent personally in public engineering affairs, but confined himself to works of philanthropy, of which much might be written. As a friend has written: "With growing wealth new channels of usefulness were continually opened up. There were the large mission-hall at the works at Openshaw now conducted by his brother, Mr. W. J. Crossley; two homes for orphan girls, or those taken from dangerous surroundings, at Altrincham; the large Rescue Home for Women, at Oakhill; innumerable gifts to the Salvation Army, the City Mission, the Boys Refuge, Foreign Missions, and very many other like objects.

Perhaps the step by which Mr. F. W. Crossley became most marked in the public view was his determination, taken many years ago, to live among the poor people. When he came to this decision he searched carefully for the most needy district in Manchester. This he found in Ancoats, at the time much more neglected than it is today. There was an old music-hall called the Star, which he purchased, and upon the site of it and in the neighbouring streets he built his mission-hall and dwellinghouse, and afterwards the row of houses used as training homes for missionaries. There he and his wife and family have made their home, labouring without sparing themselves for the spiritual, moral, and temporal welfare of the poor people round about.