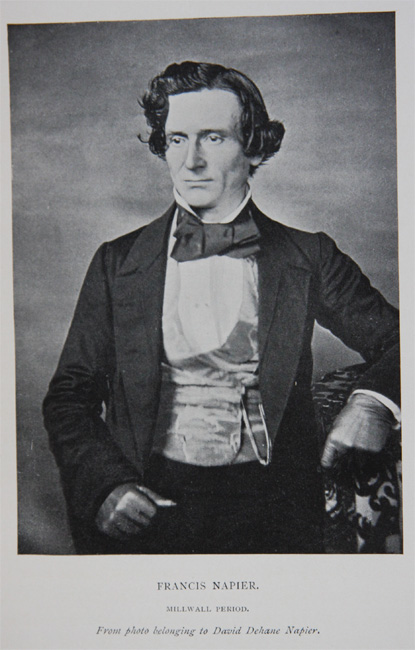 1839 Francis Napier and his brother John commenced business as engineers and shipbuilders at Millwall, under the style of J. and F. Napier with the assistance of their father David Napier and that of their younger brother Robert. They began with the construction of Mr. Napier's first experimental iron steamboat, Eclipse[1].

1852 The 3 brothers left Millwall and moved to Australia. They first tried gold-mining but after failing to succeed at that, they then followed diverging paths.

Francis Napier, the second son of David Napier of Glenshellish, Argyleshire, and of Millwall, London, whose connection with the early history of steam navigation is well known, was born at Glasgow in the year 1820.

He was educated at the Grammar School and University of that city, and studied marine engineering in the workshops of Tod and McGregor, on the Clyde.

He was the inventor of the four-piston-rod engine still often met with on that river and elsewhere, and of which the first was fitted in 1842 on board the London, Ramsgate, and Dover steamer, “Isle of Thanet.”

In 1852 Mr. Napier went to Sydney, New South Wales, and was for some time manager of the Australasian Steam Navigation Company. Afterwards he was in business there on his own account for some years.

Being more inclined for scientific pursuits than for practical engineering, he joined the expedition under Captain Cadell, equipped in 1867 by the South Australian Government for the purpose of exploring and surveying their northern territory. On this expedition he discovered a channel, now known as Cadell Strait, between Elcho Island and the mainland: the peninsula there bearing his own name. “An Account of the Natural History and Physical Geography” of this voyage, which he was preparing when he died, was recently communicated by one of his cousins to the Philosophical Society of Glasgow; also a note, 'On the apparent Absence of Air and Water from the Moon,' both of which are printed in the Proceedings of that society.

Mr. Napier returned to Glasgow in 1871, and there joined his brothers in their engineering business. He died, after a short illness, at his sister’s house on the Gareloch, on the 23rd of December, 1875.

Mr. Napier was elected an Associate of the Institution of Civil Engineers on the 9th of January, 1866.