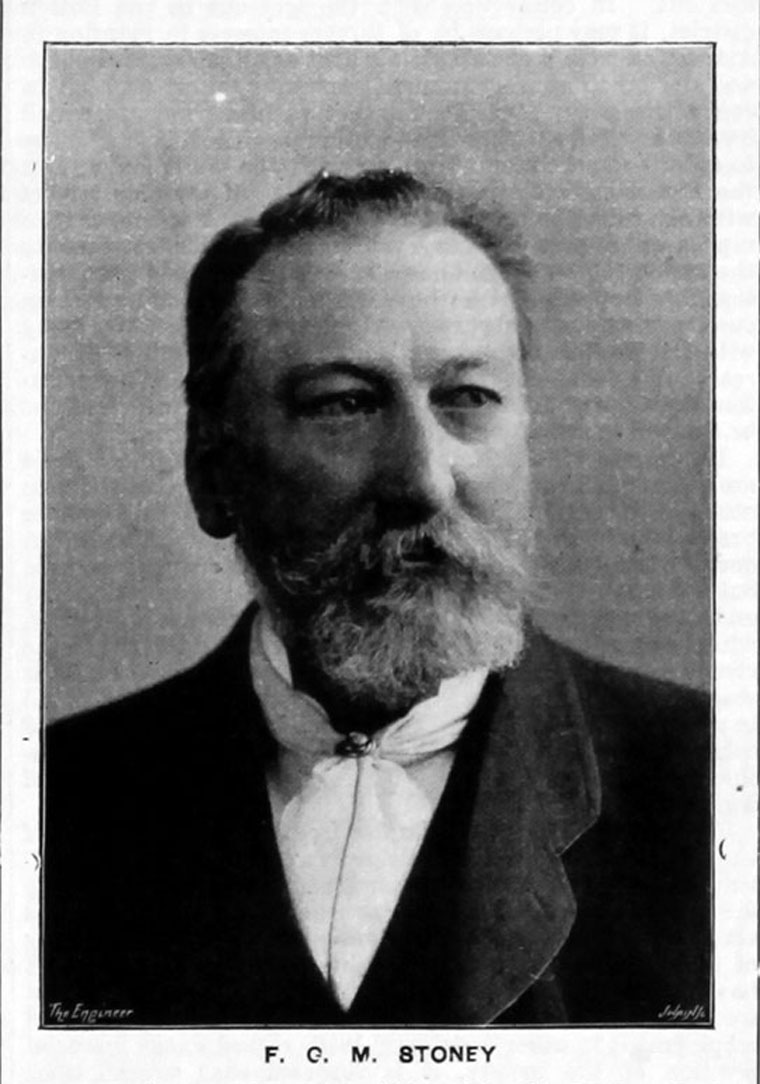 FRANCIS GOOLD MORONY STONEY, who died at Neuenahr, Germany, on the 7th August, 1897, in his sixty-first year, was chiefly known as the inventor of the rolling sluice, and as an engineer who made sluice design in all its branches his special study. He was the son of Mr. Thomas G. Stoney, J.P., and was born at his father’s house, Arran Hill, Co. Tipperary, on the 5th April, 1837.

His engineering education was received at Queen’s College, Belfast, and he was subsequently articled to Sir John Macneill, who was then engaged on the construction of railways in Ireland. Even at this date Mr. Stoney showed a preference for the mechanical side of the profession, and, after some years with Sir John, he became manager of the Dundalk Ironworks.

In May, 1865, he entered the service of John Elder and Co, the Clyde shipbuilding firm now known as the Fairfield Company. During the years 1865 and 1866 he represented the firm in Peru, in connection with the construction and working of the Callao Floating Dock.

After returning home he again left England for India in April, 1868, this time on railway work in the service of E. W. Barrett, contractor for the north-west portion of the Madras Railway.

About a year later he entered the service of the Madras Navigation and Canal Company as personal assistant to the Chief Engineer, J. H. Latham; and it was the experience of Indian irrigation requirements gained during this time which first turned his attention to the designing of sluices.

In 1869 Mr. Stoney was at work on the design of a double-door sluice, but, his health breaking down, he was obliged to return to England and was practically invalided for the two following years. During this period of ill-health, however, he continued to think out the problems suggested in India, and in 1872 he was in correspondence with General Mullins, R.E., Chief Engineer for Irrigation, Madras, respecting an equilibrium sluice to work under 100 feet head, which was the subject of his first patent, and also some smaller sluices of 36 feet area.

Early in 1873 he invented and patented the cylindrical sluice which was afterwards used on the River Weaver Navigation. A model was sent to Mr. S. W. Sandeman, Engineer to the Weaver Trust, in February of that year and, subsequently twenty-eight of these sluices were ordered.

Before their manufacture had been completed Mr. Stoney’s third sluice was invented and patented. This design, which covers the well-known 'roller sluice,' proved a far better solution of the problem than either of the preceding inventions, and has had more extensive practical developments.

During this time Mr. Stoney was acting as Chief Draughtsman to Messrs. R. B. Bell and D. Miller, of Glasgow. His health again breaking down, he resigned that appointment and devoted all his energies to advocating the new sluices.

In August, 1876, he started as a Consulting Engineer in Westminster, where he remained for about ten years. During part of that time he was in partnership with Mr. Ellice-Clark. The record of those years is one of constant effort to introduce the roller sluices. Other work, however, was done, and in 1878 Mr. Stoney obtained a prize of £100 for his design for a steam-ferry between Greenwich and Poplar.

He also designed a pier for Hove, and in 1880 brought out a steel sleeper in conjunction with the late R. C. Rapier.

About that time a patent was obtained for a 'double-door roller sluice,' an absolutely watertight contrivance rendering it peculiarly suitable for graving-docks. Mr. Stoney also patented a form of rolling flap-valve, which has been used in tidal outfalls, for sewage work, &c. The first large roller sluices were erected for the Lough Erne Drainage in the summer of 1883. The sluices were four in number, each 29 feet by 16 feet, and were worked individually by hand or by a turbine. Roller sluices of this type were used throughout on the Manchester Ship Canal to the number of about thirty large flood sluices and eighty lock sluices. These sluices were manufactured by Ransomes and Rapier, for which firm Mr. Stoney had become manager in February, 1887.

The publicity given to the sluices by their use on the Manchester Ship Canal resulted in an increasing demand during the last ten years. The total number of sluices constructed from the designs of Mr. Stoney is about 180, representing a sum of £230,000. Among the chief may be mentioned the Rhone sluices at Geneva, where there are six gates, each 10 metres wide by 8 metres high, the Richmond sluices across the Thames, and the Glasgow sluices across the Clyde now in course of construction.

The type of sluice used in these last two sets formed the subject of a sixth patent and is of a most ingenious character. The gate is lifted by a trunnion at each end placed at the exact centre of gravity. While in the water it moves in a vertical plane in the usual manner and in contact with the rollers, but on being lifted to the required, height it is automatically swung round on the trunnion into a horizontal plane, thus saving much headroom.

The Richmond sluices are 66 feet wide and 10 feet deep, while those for Glasgow are 80 feet wide by 12 feet deep, and the working of the sluices is so satisfactory that there is no reason why even this great size should not be exceeded. Large sluices are also in contemplation for India and Egypt, and there is every reason to believe that the greatest developments of Mr. Stoney’s inventions and of the work to which he devoted his life are yet to come.

In his capacity as Works Manager for Messrs. Ransomes and Rapier, Mr. Stoney engaged in the design of steam-cranes, and introduced several improvements. The most important of these are the patent tipping-cranes, a number of which were used in connection with the dredging operations on the Manchester Ship Canal and also for the loading of coal.

Mr. Stoney was elected a Member on the 6th March, 1883, and while practising in Westminster frequently attended the meetings of the Institution.