Grace's Guide is the leading source of historical information on industry and manufacturing in Britain. This web publication contains 145,023 pages of information and 230,655 images on early companies, their products and the people who designed and built them. 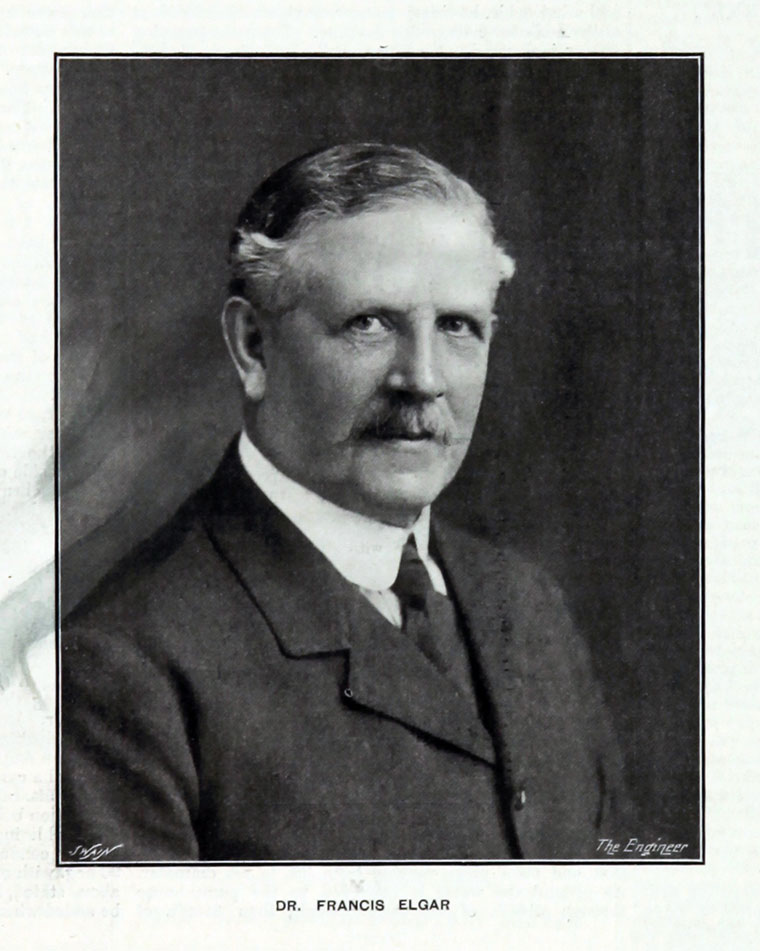 1845 April 24th. Born at Portsmouth, the eldest son of nine children of Francis Ancell Elgar, who was employed at Portsmouth Dockyard, and his wife, Susanna Chalkley.

c.1859 Apprenticed as a shipwright in Portsmouth Dockyard

1864 one of eight students of naval architecture at the new Royal School of Naval Architecture and Marine Engineering at South Kensington.

1867 Graduated first-class. Became a junior officer in the shipbuilding department of the Navy; employed at the dockyards and in private establishments.

1874 General manager of Earle's Shipbuilding and Engineering Co at Hull

1881 Resumed private practice in London, advising leading shipping companies on design of new ships and investigating the causes of loss of, or accident to, important vessels.

1886 Invited by the Admiralty to become director of dockyards, where he improved the operations.

1892 Left the dockyards on appointment as consulting naval architect and director of the Fairfield Shipbuilding and Engineering Co.

1905 Resigned as managing director of Farifields, but retained tho position of consulting naval architect.

He was born at Portsmouth in 1845, his family having long been connected with the Royal Dockyard, in which establishment he began his professional training in 1858.

In 1864 he was selected as one of eight shipbuilding students by the Admiralty for a course at the Royal School of Naval Architecture and Marine Engineering, which was then being started. After a distinguished three years' course at that institution, he was appointed an Inspector of Contract Ship- building, and later joined the constructive staff of Portsmouth Dockyard.

In 1871 he left the Admiralty service, and for the next eight years was chief professional assistant to Sir Edward Reed. Subsequently he went to Japan as Adviser on Naval Construction to the Japanese Government, a post which he held until 1881, when he returned to England and began practice as a consulting architect in London.

In 1883 he was appointed the first Professor of Naval Architecture in the University of Glasgow, a post he resigned in 1886 to take up the position of Director of Dockyards at the Admiralty, where he continued until 1892, when he joined the Board of the Fairfield Shipbuilding and Engineering Company, Glasgow, and became their consulting naval architect at a time when the Campania and Lucania were building for the Cunard Company.

He was a foundation member of the Institute of Metals, and took great interest in its development, although his onerous business engagements prevented him from playing so active a part as he desired.

. . . whole of Dr. Elgar's life was devoted to marine engineering. He was born in 1845 at Portsmouth in a family which had for many years been connected with the Royal Dockyard. . . . In 1874 he was made general manager of Earle's Shipbuilding and Engineering Co at Hull. . . . special knowledge of the stability of ships were requisitioned by Alexander Stephen and Sons, . . . Admiralty appointed him Director of Dockyards, . . . joined the Fairfield Shipbuilding and Engineering Co, of Glasgow, as director and naval architect. For fifteen years he was associated with this company, . . . in 1906 . . chairmanship of Cammell, Laird and Co. . . . [more]