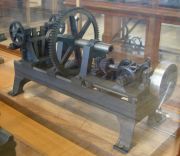 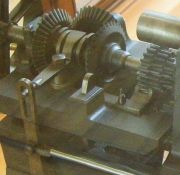 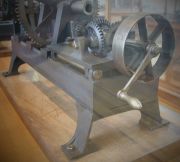 Note: This is a sub-section of Fox of Derby

Fox of Derby was one of the most influential makers of machine tools in the first few decades of the 19th century.

The Paris Musée des Arts et Métiers (Conservatoire des Arts et Métiers) have a number of accurate working scale models of Fox machine tools. These were presumably made to spread knowledge of the design and special features of these machines to French manufacturers. One of these models, designed for cutting the threads on bolts, is on display, and is described by the museum as a machine à fileter au peigne. Brief summary here. The model was made c.1830 and is copied from the machine imported from Fox by Thiébaut, who went on to make many copies of it.[1].

1838 A German publication described a screwing machine by Fox and provided excellent drawings, showing a machine identical in design to the model. It was approximately 8ft long, compared with the model's 2ft length [2].

The thread was cut by a split die held stationary in the machine, while the bolt head was held in a chuck, fixed to a rotating spindle with a hollow bore. The spindle, which was free to move axially, was turned at low speed by a large diameter gear wheel fixed to the spindle between the spindle bearings. The bearings were located in pedestals whose position on the machine's bed could be altered by sliding them along the bed. The pedestals and the die holding head were located kinematically by one Vee and one flat way.

The large gear was driven by a long pinion (actually assembled from a stack of short pinions). Drive to the pinion came through a reversing bevel gear system driven by a belt. Three speeds were available, the machine having a cluster of three gears on a pivoted base.

Photos 7-9 show the split die held in spring-loaded jaws. The springs between the jaws are visible in photo 8. On the back of each half die is a tapered rectangular mortice to locate it in the jaw. The jaws are moved in unison by the geared screws. On the model, the handwheel from the pinions' shaft is missing.

Photos 2, 4 & 5 show the lever-operated dog clutch which engages one or other of the bevel gears for clockwise or anti-clockwise rotation, or selects neutral.

In photo 6 can be seen the hinged plate carrying three gears. One of these gears is selected to engage with the input pinion and with the main spindle gear to drive it at the required speed, according to the diameter of the workpiece (or the piecework bonus!). Photo 4 shows the simple forked gear selector, held in place by a wing nut. Also visible is a curved bar protruding through the boss in the hinged plate. This determines the angle of the plate, as required for correct engagement of the selected gear. There is a hole in the boss for a pin which presumably engaged with one of three holes in the curved bar.

No means are provided for forcing the workpiece into the die. Presumably by initially squeezing the die onto the workpiece with moderate force, the angle of the impressions would cause the rotating workpiece to be fed in further. The die could then be slackened slightly, the spindle reversed, and the process repeated.

A French source described it as a machine à tarauder les boulons et écrous (machine for threading bolts and nuts). It is not obvious how it could thread nuts, but in principle the split die could be replaced by a square-jawed tap holder, and the nut could be held in the chuck. In practice this might have been more than the taps of the day could tolerate. Accepted practice when hand tapping was to advance the tap incrementally, taking small cuts and turning the tap back to break the chips. Also three sets of taps were used known as taper, second and plug.