Grace's Guide is the leading source of historical information on industry and manufacturing in Britain. This web publication contains 138,939 pages of information and 225,312 images on early companies, their products and the people who designed and built them. 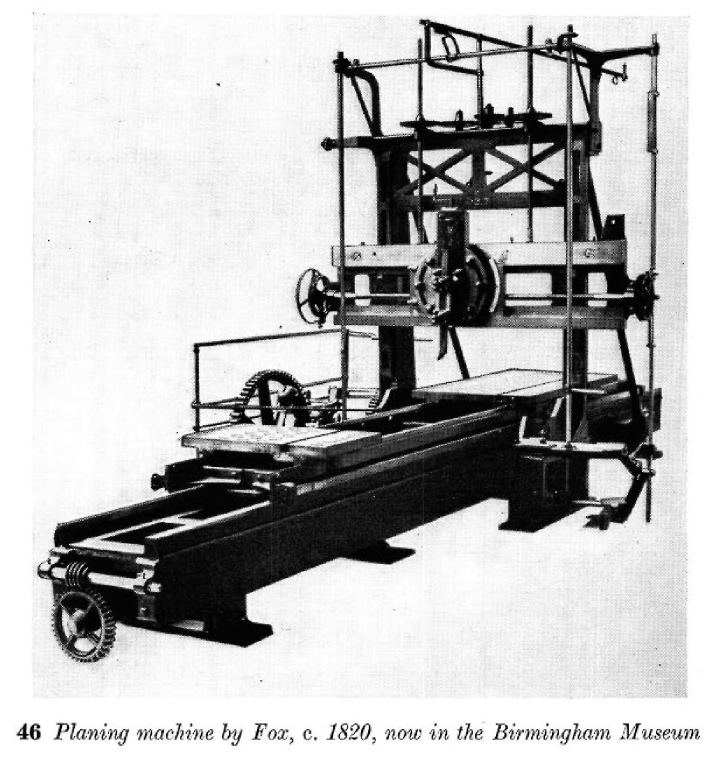 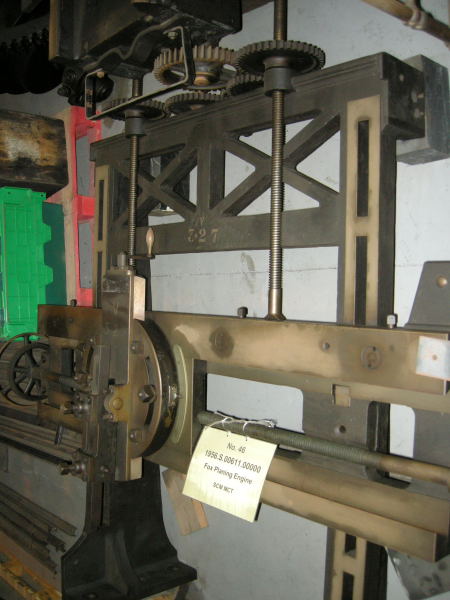 2. This shows the column/cross slide assembly as it would appear on the assembled machine

3. The toolholder is moved transversely by a leadscrew. This is turned either by a handwheel located on the square end of the shaft, or automatically, by a ratchet pawl acting on one of the gear wheels. It appears that the pawl is attached to the other wheel, which rotates freely on the leadscrew shaft, and is driven by a vertical rack, the rack being worked by a striker on the machine's table

7. Planing machine bed, with one V and one flat guide 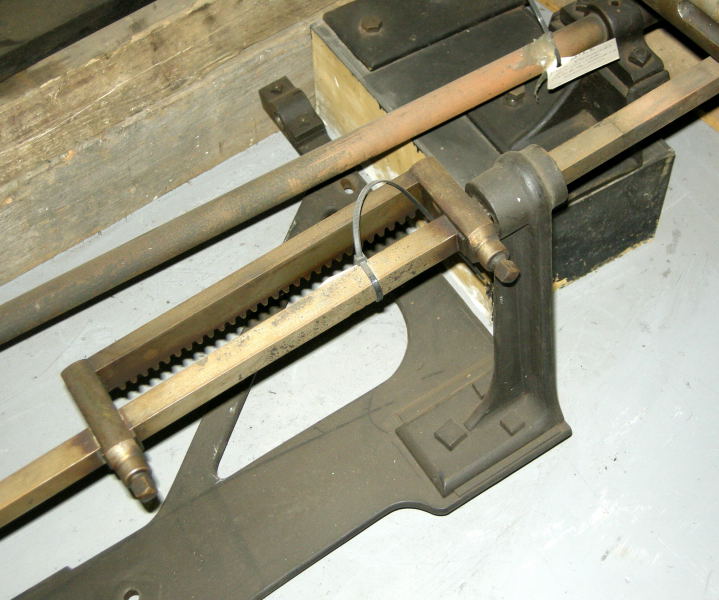 Note: This is a sub-section of Fox of Derby

This metal planing machine was formerly on display at the Birmingham Museum of Science and Industry. It is currently dismantled and in store in the Birmingham Museums and Art Gallery Collections Centre. The machine is illustrated in Rolt's 'Tools for the Job'[1] and in W. Steeds' 'A History of Machine Tools 1700 - 1910'[2]. An earlier edition of Rolt's book is available online here, and this is the source of the first image here.

This is one of three machine tools by Fox of Derby which came from a machine shop at Milford Mill, Derbyshire, and was donated to the Science Museum by the mill's owners, English Sewing Cotton Co Ltd. Following donation, a plaque was fixed to the machine giving a date of 1817, on the assumption that it was installed when the workshop was newly built. The date 1817 was cast into the roof supports of the workshop. The workshop building itself was remarkably advanced for the time, having unusually large windows with cast iron frames. It is logical to assume that this would have been built to house state-of-the-art machine tools. However the design and quality of construction of the planer and of the accompanying lathes by Fox are so advanced that it seems unlikely that they were made as early as 1817. Steeds put the date at 1820-1825. It could well be of later construction. Comparison is made below with other Fox planing machines.

If the machine was made in the 1820s, there could be little doubt that this is the earliest large metal planing machine in existence, and it is unfortunate that such an historically important machine tool is not on public display.

Access to study the components was kindly provided by Emily Gough at the Collections Centre. It is hoped that the photographs included here will give an adequate impression of the advanced design and the quality of construction.

In photo 7, a worm and wheel can be seen at the right end of the bed. Steeds points out that this turns a pinion engaging with a short vertical rack. The rack is located in a pedestal bolted to the floor underneath the planer's table rack. The vertical rack would be used to lift the table, presumably to enable the guides to be lubricated.

Comparison with other Fox planing machines

A smaller Fox planing and grooving machine was described in a French journal in 1834. The automatic feed arrangements are very different to those on the Birmingham machine.

An 1842 machine preserved at the Næs Iron Works Museum has many similarities to the 1834 description. However the table slides on two V-ways rather than the one V plus one flat guide on the Birmingham and c.1834 examples.[3]. Note: another French source[4] states that the type of machine described in the 1834 article was constructed by Fox in 1821 for planing components of weaving looms.

An 1842 French source referred to Machine à planer et raboter les surfaces métalliques, de construction anglaise, montée par M. Laborde dans l'établissement d'Ougrée (near Liege), probably in 1838. The drawings here and here show a machine with distinctly Fox-like features, but Fox was not mentioned. The meaning of 'montée par' M. Laborde is not clear in this context. 'Installed by'? The planer was arranged to cut in both directions, having two cross slides, arranged back to back. The method of elevating the cross slides differed from the Birmingham machine, and the automatic feed arrangement is different again. Like the Næs machine, the bed has two V ways instead of the one V and one flat way at Birmingham. The use of twin V guides subsequently became common practice with most planer makers, but whether this tells us anything about the relative age of the Birmingham and Næs/Ougrée machines is not known.

On the Næs and the Birmingham machines, and the 1821 type (described in the 1834 article) the columns are joined at the top by X-bracing. This is absent on the other machines.

The method of elevating the cross-slide, using spur gears, is the same on the c.1834 machine and the Birmingham and the 1842 Næs machine and on the 1821 type, but differs on the c.1838 Ougrée machine, which has bevel gears.

Three different types of automatic feed have been identified. The rack and pinion arrangement seen on the Birmingham example appears to be the most convenient for the operator, and found widespread application with other makers. The same principle was applied in Joseph Whitworth's 1835 patent and Richard Roberts' 1838 patent.