Fox of Derby: Lathes in Paris

5.The glass is distorted, not the lathe! 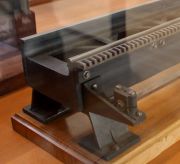 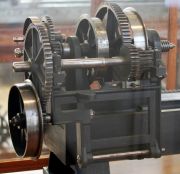 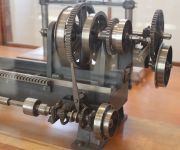 Note: This is a sub-section of Fox of Derby.

In 1842 a French article reported that 'M. Thiébaut the elder, who was for a long time one of our best tool builders, introduced the first Fox slide and screwcutting lathes in our country, which still retain a just reputation. One of these lathes was, a few years ago, notable for its large size, with its bed, cast in one piece, of more than 7 metres in length, and a width of less than 70 cm . The 1/5 scale model of this lathe is exhibited in the galleries of the Conservatoire. Later, around 1835, Messrs. Debergue and Spréafico brought from England a large parallel lathe, of a similar size to that described, and which daily renders them great service.'[1]. Note: An 1852 French source[2] states that M. Pihet (Pihet et Cie) of Paris intoduced a powerful Fox lathe to his works (ateliers de faubourg Saint-Antoine) in 1826, and was soon followed by M. Thiébaut the elder.

The 1/5 scale model referred to in the 1842 aticle was built c.1830 and remains on display at the Musée des Arts et Métiers. It is modelled on the full size lathe owned by M. Thiébaut Sr., which had a swing of 27" and a bed 23 ft long. The model was built by the school of arts et métiers in Angers, is over 5 ft long and weighs 57kg.

The lathe is very similar to the full size example preserved at the old ironworks museum in Sielpia Wielka, Poland. Photos of the lathe here and here [3].

The saddle, or carriage, is in the form of a large boring table, to which cylinders and the like could be bolted for boring. A toolpost on a compound slide could also be bolted to this table when using the lathe for turning and screwcutting. The saddle, like that on the other Fox lathes, has 'wings' which extend well forward of the toolpost position. This feature, together with the slideways which extend right to the end of the bed, i.e. to the outboard end of the headstock, ensures that the toolpost is well-supported when working close to the headstock. An ingenious aspect on this lathe is that a plate can be inserted to span the gap between the saddle's 'wings' when used as a boring table. This plate can be seen in place in photo 5.

The Musée des Arts et Métiers have drawings and descriptions of the lathe. Online listing here, but the resolution of the images is low.

The photographs here show the model lathe at the Musée des Arts et Métiers. The lathe preserved at Sielpia Wielka is almost identical, except for the addition of a screwcutting leadscrew and associated gears and pulleys.

Photo 3 shows the carriage (saddle) and its gears. The left hand gear is driven by the worm gear which itself is driven by a square layshaft. The small pinion inboard of this gear drives the RH gear, proving a slower powered traverse speed. Photo 4 shows the other end of the gears' spindles, the LH spindle having a squared end for a hand crank for manually traversing the carriage. No doubt the gears could be slid in and out of engagement.

Photo 7 shows the cluster of bevel gears and the dog clutch which select forward or reverse rotation of the square layshaft, or neutral,the power being transmitted by one of two belts from the lathe spindle.

Photo 8 shows the three tumbling gears which provide a range of three speeds for the lathe spindle. Fox used a similar arrangement on his screwing machine. It appears that three separate drive belts would have transmitted power from the works lineshaft, two direct to the lathe spindle for high speeds, and one through the tumbler gears for low speeds.