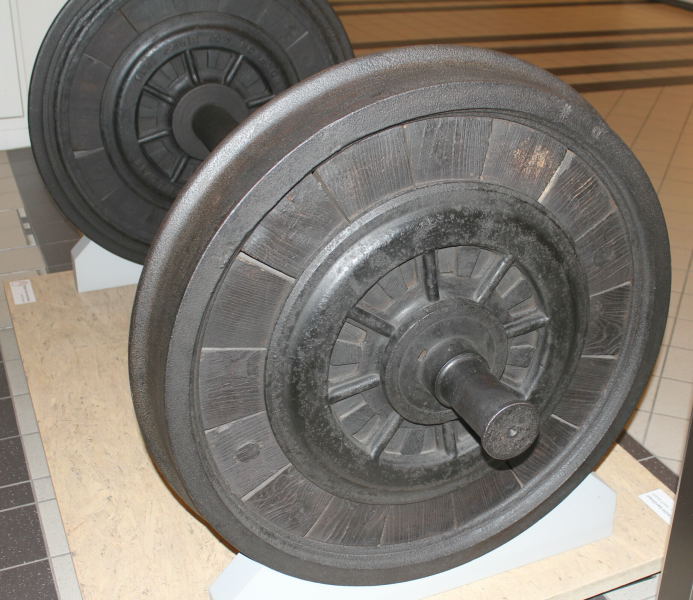 Wood-filled railway carriage wheels made to Beattie's patent by Fox, Henderson in 1856. On display at Vienna Technical Museum 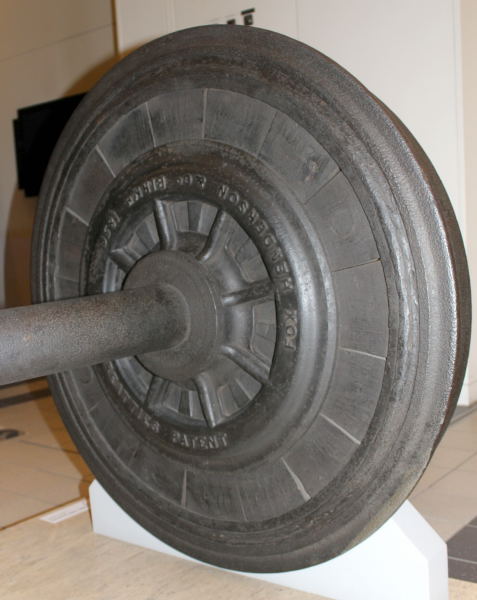 By 1841, John Henderson had joined Bramah and Fox

1843 Birkenhead Commissioners approved plans for a market at Birkenhead prepared by Fox, Henderson and Co[2].

1844 Fox, Henderson and Co were responsible for construction of Birkenhead Market but it was late and over-budget[3]. A wall blew down during construction[4].

1844 Charles Fox, on behalf of Fox, Henderson and Co, testified at an inquest arising from an accident when a glazed roof, under construction at Bricklayer's Arms Station, failed; Fox, Henderson and Co were sub-contractors to Grissel and Peto and had installed a considerable amount of similar roofs in recent months but would change how this type of roof was installed in future[5].

1848 Partnership change. '...the Partnership heretofore subsisting between us, as Engineers and Machinists, at the London Works, Birmingham, and in New-street, Spring-gardens, London, under the firm of Fox, Henderson, and Co., was this day dissolved, by mutual consent, so far as relates to the undersigned Ambrose Moore and James Ward Hoby.— Dated this 30th day of June 1848. Charles Fox. John Henderson. A. Moore. James Ward Hoby.'[6]

William Siemens had developed ideas about ways of improving steam engines, which he patented. The new design of engine was constructed at Fox, Henderson and Co's factory at Smethwick, where Siemens was subsequently employed, receiving not only his interest in the patents but also a fixed salary of £400 per annum. His brother Frederick joined him later as an assistant at the same firm. The engine was ingenious but not commercial. In 1850, the Society of Arts awarded Siemens a gold medal for his regenerative condenser.

Fox, Henderson and Co was responsible for many important station roofs including Liverpool Tithebarn Street, (1849–50), Bradford Exchange (1850), Paddington and Birmingham New Street. Fox led the design side whilst Henderson handled the manufacturing.

1849-50 Contractor for the ironwork of Athlone Railway Bridge.

1850 Contractor for Rochester Bridge; some divergence of views in retrospect as to the importance of a patented method of sinking cylinders for foundations and adaptations by the company[9].

1850 Fox and Henderson's expertise with structural ironwork led Joseph Paxton to invite them to build his iron and glass scheme for The Crystal Palace for The 1851 Great Exhibition. They built all the ironwork for the building, starting work before the formal contract had been agreed. Due to its innovative modular design and construction techniques, it was ready in nine months[10]. Some of the work was carried out at the Renfrew works[11].

1851 For their work on the Crystal Palace, Fox, Cubitt and Paxton were knighted on 22 October.

1852 After the exhibition, the structure was due to be demolished but Fox, Henderson and Co stimulated a campaign to preserve it[12]. They were employed by the Crystal Palace Company to move the structure to Sydenham, re-erecting and enlarging it on Sydenham Hill, thereafter known as Crystal Palace.

At the close of 1852 William Siemens's links with Fox, Henderson and Co were terminated, the losses and difficulties sustained by the firm having led to friction with the inventor.

1855 Fox, Henderson and Co acted as intermediaries between the British Government and an American arms maker to supply weapons; by 1857 only part of the order had been delivered and some of the advance would have to be recovered by a charge on the estate of Fox, Henderson and Co[15].

1856 Fox, Henderson and Co were placed in administration having debts greater than assets due to problems with contracts with Danish Railways, Berlin and France[16] but in view of the amount of orders it was hoped to keep the works operating[17].

1857 Fox, Henderson and Co lost a lawsuit in the French Tribunal of Commerce concerning shares in the Company of the Docks Napoleon, and work done on the docks in 1854[18].

1857 Charles Fox left the company to practice as a civil and consulting engineer with two of his sons, Charles and Francis, and in 1860 formed a partnership with his two sons, the firm being known as Sir Charles Fox and Sons.

1857 Closure of London Works, which had once employed 2000[19]. The bankruptcy of Fox, Henderson and Co[20] had caused loss of employment in the area of the Works and displacement of people away from that part of Smethwick[21]. Sale by auction of the contractors tools, stocks of chains and stores on the site of London Works[22].