Interesting times for the bricklayers 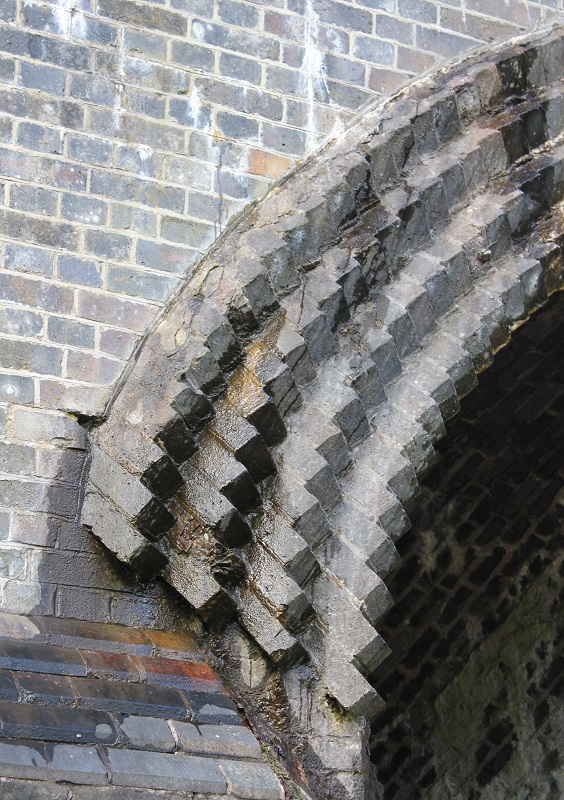 The brick arches would have been laid on wooden 'centring'. It is just possible to see the impression of the wooden planks in the mortar

The discontinuity shows that the viaduct was widened at some point

This is an unusual masonry viaduct, which formerly carried the Somerset and Dorset Railway over the tracks of the Bristol and North Somerset Railway (later GWR) and a tramway. Now used for walkers and cyclists.

The S&DR extension encountered the existing lines in a fairly narrow valley, and needed to cross them at an acute angle, which would have dictated very long skewed arches. A compromise was arrived at whereby the viaduct was locally widened to reduce the amount of skew at the end faces of the spans for the two existing tracks (see photos).

'..... The railway between Midford and Radstock follows to very considerable extent the route of the tram-road formerly belonging to the Company of Proprietors of the Somersetshire Coal Canal Navigation. This old “railway” was constructed by that company some seventy years since, in lieu of a canal in the Wellow valley, and was made on its towing path. Parts the the old canal may still be seen here and there; but in the course of time it has to a large extent been levelled up. The tram road, with all its branches and works, was sold by its proprietors to the Railway Company by their Act. ......

'.... The train then commences another ascent on a very heavy embankment some 40 feet high crossing the Welton Bottom, in which is a somewhat peculiarly constructed bridge over the Bristol and North Somerset Railway, and a branch of the old tram-road previously alluded to.'